The mission to save Snoqualmie River 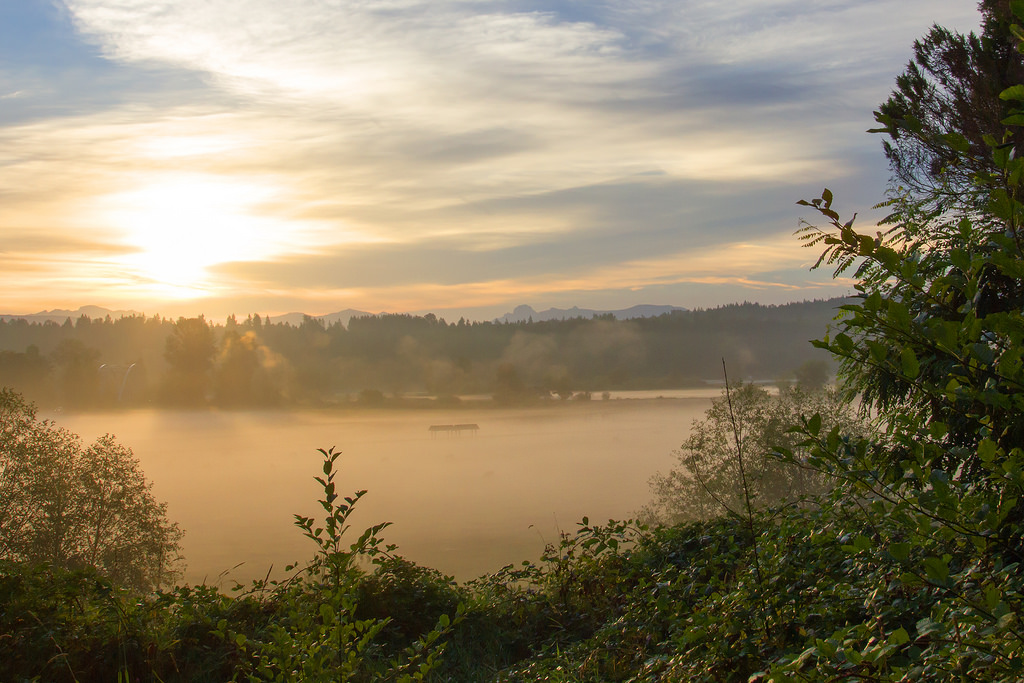 An August sunrise over the Snoqualmie Valley

Under towering black cotton woods on the banks of the Snoqualmie River near the historic Carnation Dairy, a restoration crew surveys the scene. One of the most important rivers in the fertile Snoqualmie Valley east of Seattle, the river once boasted record salmon runs for the Snoqualmie and Tulalip Native American tribes who first lived here. But development and population growth, pollution, climate change and mother nature have all taken a toll.

Today, restoration is underway to make sure the meandering, 43-mile stretch of Snoqualmie River below Snoqualmie Falls and its surrounding lands are sustainable. The Snoqualmie watershed is a big one, the largest of three in King County, and an area where population growth continues. Farmland in this fertile valley helps feed the Eastside and Seattle's appetite for organic and sustainably grown food. The Snoqualmie River – from the base of Snoqualmie Falls to Monroe and its tributaries – is also critical for salmon, whose numbers all but vanished last year with weak snow pack to feed rivers and record heat.

As a habitat restoration crew from Stewardship Partners, a non-profit with close ties to local farms and businesses, works near the river, a red-tailed hawk flies over head while chickadees and kildeer chase and sing. Native plants like salmon berry are taking root along with Sitka spruce and dogwoods.

“We're trying to introduce shade here to lower the water temperature for salmon habitat,” says Geoff Bough, who is leading the habitat restoration crew. “Everything we do here has a trickle down effect.” And, he says, "Everything you do upstream affects downstream."

It all comes down to water quality, he says. More trees and native plants will keep the waters cool enough for salmon, stabilize the river's banks, and protect it from storms. A recent storm tore down two large cotton woods. “This kind of shows you a little bit of mother nature at work,” says Bough, as we navigate the landscape, “erosion and high winds.”

Floods, always common in the Snoqualmie Valley, appear to be more severe now. Sometimes they'll carve a new oxbow or bend in the river, channeling through carefully planted fields. Landscape fabric was once used to stabilize the bank, but now everything is done from an ecological and watershed approach.

Chris LaPointe, Stewardship Partners’ Snoqualmie program manager, points out alder trees: “We're trying to get more in these areas. Alders fix nitrogen in the soil. When they fall down and decompose they create healthier, more nutritious soil for the other plants to thrive.” But the regularity of floods, he says, “affects everything we do.”

At times the task seems formidable. Many say severe weather here stems from both climate change and Mother Nature. At times they seem indistinguishable, but the result is real and visceral. Last year's severe drought saw farmers scrambling to feed thirsty crops for customers who depend on them, while non-stop rains this winter and spring saw them scrambling to deal with the sheer volume of water.

Many farms in the valley collaborate with Stewardship Partners to restore the river's banks and engage in measurable habitat restoration. And three farms — Oxbow Organic Farm and Conservation Center, Full Circle and Sinnema — are part of Stewardship Partners’ most recent program, Adopt-a-Buffer, which enlists businesses, organizations and individuals in creating and maintaining strips of native trees and shrubs along the edge of the river.

The historic Carnation Dairy, where restoration is underway today, is a recent partner. Once famous for “contented cows” and condensed Carnation milk, the site is now Camp Korey, a year long camp for families and children with serious medical conditions. A member of Paul Newman's “Serious Fun Camps,” the camp grows organic food and earned the “salmon-safe” regional eco-label for its stewardship to ensure a healthy river.

Rosy Smit, culinary manager at Camp Korey, says the 1,800 acre former dairy farm, “is very cognizant of where we are in the local environment.” The camp is part of the buffer program from Stewardship Partners, which she praises as a perfect example of working in community.

The Snoqualmie River is one of the reasons campers get to see raptors and wildlife, says Smit. It's a stewardship “that benefits the food shed and watershed we're a part of.” Immersion in this outside world is also part of the camp experience. “The garden is right up next to a riparian area. Cotton woods, all sorts of native plants are close by and you can see the transition from agriculture production to those native areas.”

Along with businesses and schools that have joined the partnership is the city of Duvall, seven miles north as the crow flies, which was recognized by King County for leadership in developing a watershed management plan. Jason Walker, Duvall City Council member and self-proclaimed watershed crusader, says every city, farm and business in the 700-square mile watershed is part of the same dynamic. “We all need to understand that we all share the benefits of our natural environment. The natural beauty I'm always expounding on here is absolutely jaw-dropping.”

Walker says his personal view is that the role of the cities and towns along the Snoqualmie and other resource-rich rivers is critical. “If small cities like Duvall can't lead the region in restoring the health of Puget Sound and to address the likely affects of climate change, then who can?” asks Walker. “We must. If someone wants to change the world they need to start with themselves, their home, their town and go from there.”

Working on the banks of the Snoqualmie River near Camp Korey, the Stewardship Partners crew praises Duvall's efforts, while also talking about an uphill battle in the face of both climate change and population growth, which brings tree clearing for development. Drew Wilkinson, buffer program associate with the Stewardship Partners, says, “Riparian areas like this are some of the most ecologically diverse habitat in the Northwest. They're home to over 70 species of birds, amphibians, mammals, reptiles. I mean if you just stop the interview and listen, you can hear life everywhere.

“And as the Northwest and Metropolitan Seattle continues to expand and urbanize, areas like this become ever more important. Not just for the wild species that live here, but for us too.”

To learn about some of the birds in this valley which include osprey, northern flickers, orange crowned warblers, MacGillray's warbler and others, click here.