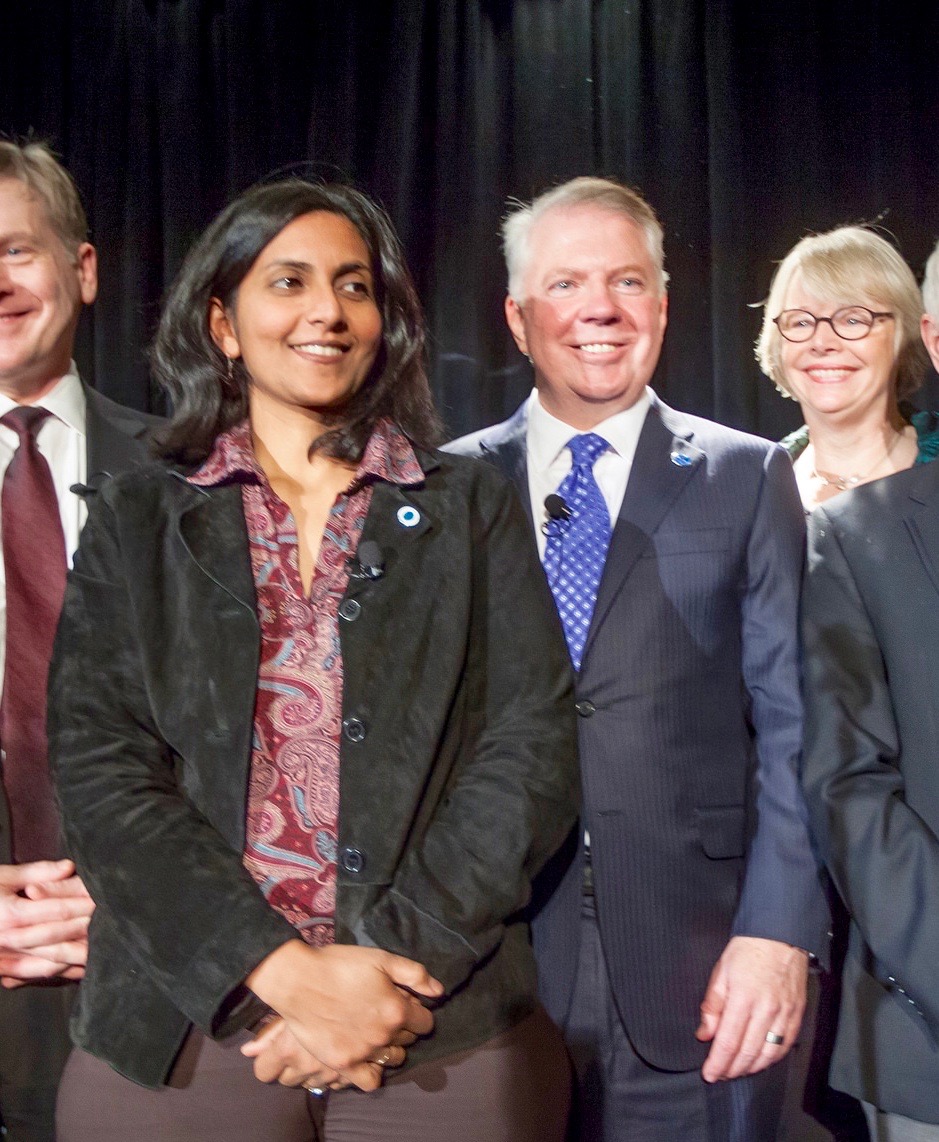 Kshama Sawant, center left, and Ed Murray, who often stand apart politically, stood next to each other in a 2014 group picture of city officials.

They call it the “Carl Haglund law,” named for a landlord whose shoddy apartment buildings have raised eyebrows as high as his rent. If passed, the bill, introduced last October by City Councilmember Kshama Sawant and former Councilmember Nick Licata, would require landlords to bring their buildings up to code before raising rents.

Further, if landlords retaliated against tenants for complaining about poor conditions, they could be slapped with penalties from the Seattle Department of Construction and Inspections.

Licata has since set off into the sunset, but Sawant has apparently found someone else to help send the bill forward: Mayor Ed Murray. That’s a bit of a surprise — despite managing to work together on Sawant's signature achievement, the ordinance raising the city's minimum wage to $15, they’ve never exactly seen eye-to-eye. But the joint proposal on rents and repairs has been well received by almost everyone in City Hall, so if they were going to partner on anything, this appears to be another time they can get results.

Outside City Hall, opposition to the proposal comes in the form of the developer/landlord community. Development lobbyist Roger Valdez, for example, has argued rent hikes are what allow landlords to make necessary changes. Last year he scoffed at Councilmember Sawant for painting developers as all rich and powerful; he contended most are small and strapped for cash.

Likewise, the Rental Housing Association of Washington isn’t too keen on the proposal, painting it as an end run of a Washington state law banning rent control by cities. “The city already, under current state and city laws, has clear and direct authority to abate problem properties without wading in to any discussion of back-door forms of rent-control,” said spokesperson Sean Martin in a statement. “We are concerned that this new legislation is being moved forward without being properly vetted to ensure it does not run afoul of the state pre-emption of rent control.”

But when both Murray and Sawant sign onto a bill, it’s hard to imagine anything short of a lawsuit stopping it from passing.

Even today's announcement of the Murray-Sawant cooperation today seemed to reflect some political gamesmanship over who should get credit. Their joint press release called the “tenant protection bill … a recommendation from the Mayor’s Housing Affordability and Livability Agenda,” the mayor’s 2015 package of recommendations to add 50,000 housing units over the next 10 years.

This is kind of true. In the 2015 recommendations, the advisory committee danced around the issue of rent increases and building improvements, but the proposals focused more on helping landlords bring their buildings up to code: a rehab loan program and working “with communities to explore ways to mitigate the financial burden of these code requirements.” There are also 10 recommendations aimed at strengthening tenant protections. One in particular proposes strengthening language around using rent hikes to oust tenants before demolition or rehabilitation. But there’s nothing so strong as banning rent hikes until the apartment is up to code. That clearly came from Sawant and Licata. Murray has a bit of a reputation for bandwagoning on popular issues and this won't change that.

Still, the statement did credit Licata and Sawant with bringing this forward in the fall, so apparently everything’s square and we’re being too nitpicky.

Today’s transmittal comes just a day after Murray introduced legislation that was a little more clearly labeled in HALA: expanding protections against renters from rejection based on their source of income. That proposal would offer similar protections for people on Social Security, disability, veteran’s benefits or child support as already exist for people using federally supported Section 8 housing vouchers.

It is also a sort of indirect attempt at restricting preferred employer discounts — a practice of essentially offering up deals to get an Amazon or Microsoft employee in exchange for perceived stability. Legally, it doesn’t squash this practice dead, but will look into whether it de facto favors white men, which could potentially make the practice illegal.

The announcement of that legislation also had its own way of handling who should get credit. The Stranger first reported on the preferred-employer issue, but Murray’s release links to the Seattle Times’ story that came out a week later. His relationship with the alt-weekly is apparently similar to the one he has with Sawant.

Both the Sawant-Murray rent proposal and the income protection measure are expected to receive council consideration this spring.