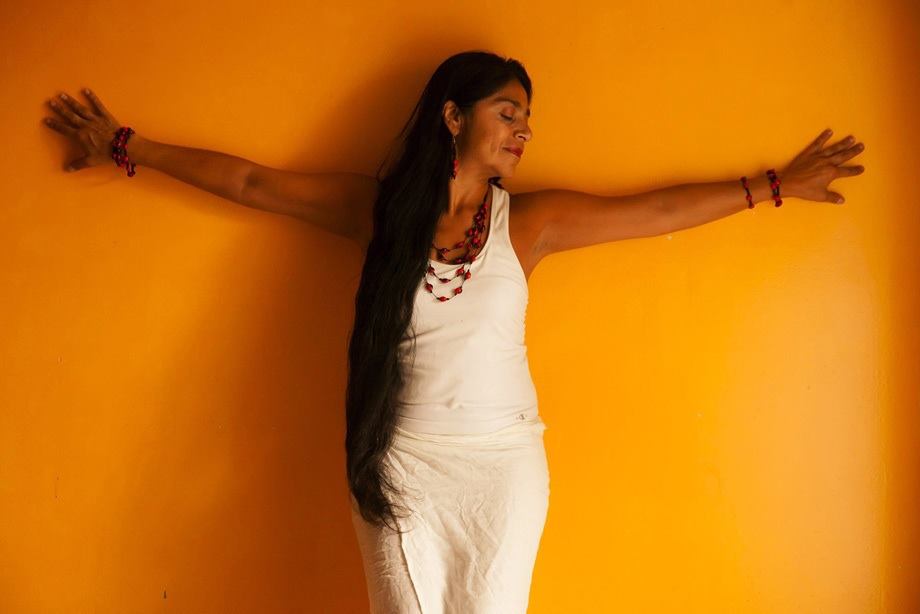 This is the first in a series of profiles of artists who will be performing at the sold out Crosscut Arts Salon: The color of race, on April 28.

Rose Cano had been working as a medical interpreter in Harborview’s emergency department for about a year when she began to see a recurring theme: Homeless Latinos coming in and out for various reasons.

One particular man in the psychiatric unit got her thinking about individuals who succumb to life on the streets. “They are living more like animals,” Cano says, “but some people manage to maintain that very Latino cultural norm, which is treating people with respect.”

Sitting there waiting for her patient, she asked herself, “Who is the most famous gentleman of all time?” Don Quixote was the first name that came to mind. “I thought, ‘Wow, what if he and his sidekick were alive today?’”

The result was the 2013 theater production “Don Quixote & Sancho Panza: Homeless in Seattle.” The modern adaptation of the 17th century Spanish novel centered around two homeless Latino men who meet in the ER and navigate Seattle’s streets, homeless shelters and healthcare system together.

It was an early experiment in combining her two worlds — that of a medical professional and a playwright and actor — and the beginning of a path she is still following today as Artistic Director of the nonprofit theater company Ese Teatro, where she also often explores issues of race.

“Theater is a great place to be able to tell the stories of the populace,” Cano says, referring to the people she meets in the hospital, “and that’s a passion of mine.”

I met Cano on a Sunday at the Yard Café in Greenwood, where I found her sitting on the patio, drinking a cold beer and staring intensely at her computer tablet. She’d come from the St. John School, where she’d cast her ballot in the Peruvian general election.

But in the way she described the scene at the polls, it sounded more like a celebration than simply voting. “You must go next time and try the tamales,” she exclaimed. “They’re gone so quickly.”

Cano, a dual citizen of Peru and the United States, grew up in a Peruvian enclave in Capitol Hill, with cousins across the street and grandparents just two blocks away. After high school, she attended Cornish College of the Arts, graduating with a one-person show called “Self Portrait,” which was 60 percent English and 40 percent Spanish.

In search of her personal identity, she moved to Lima, Peru, in 1986, where she flipped “Self Portrait” to 60 percent Spanish so the locals could understand it. Cano thought she’d only be in Peru for a year, but ended up staying for ten.

Eventually, she found her way back to a Seattle that had changed. She wasn’t living in Capitol Hill or Phinney Ridge anymore. “The only place I could afford a home was in South Seattle,” she says.

She kept her connection with Peru through a new project, North-South ConeXions. In 1994, she and her husband invited four Native American artists from Washington tribes to spend a month in Peru, performing dances, songs, drumming and even wood-carving in Lima and villages in the Andes. The project continued for ten years.

“It was a beautiful native-to-native exchange because each culture didn’t know about the other,” Cano says.

In 2001, she she started African ConeXions, bringing four artists from Havana, Cuba, to spend six weeks in Seattle’s Rainier Valley. The artists worked with neighborhood youth and performed at Rainier Arts Center. The exchange brought the two communities together through music, dance and art. This continued for five years.

“People say Seattle is so white, but I don’t know what they mean,” Cano says. “I guess it depends where you live, but I’d say get out more — go to Harborview Hospital where 84 languages are served.”

Not long after Cano moved back from Peru, Seattle's Group Theatre had shut its doors. In the ’90s, The theater was renowned for its support and encouragement of multi-cultural theatre. Cano kept waiting for another theater to take its place for the Latino community, specifically. But by 2010, she was fed up.

“Portland is smaller than Seattle and it has had a Latino theater company for 30 years,” Cano says. “You think a city our size, why don’t we have that?”

She spearheaded the effort to create Ese Teatro in 2010 to fill that void. The first Latino theater in Seattle, Ese Teatro casts Latinos to perform in both English and Spanish. The newest production, Bernie’s Apartment, will be the company’s third Mainstage in partnership with ACT Theatre.

It’s taken five years, but Cano says the company is now able to retain Latino artists in Seattle. They aren’t leaving to go to Los Angeles and New York City.

“Five years ago I couldn’t have cast my newest show, which is in 30 percent Spanish and requires at least two bilingual actors,” Cano says.

Friday, April 15, is Latino/a Theater Day, and Cano will spend it on the UW campus convening with an alliance of Latino artists, producers and scholars — each part of Latino Theatre Commons (LTC). After attending an LTC meeting in Boston, she realized the importance of holding a conversation about the state of Latino Theater and American Theater in Seattle, so she made it happen.

“I consider [Seattle] part of the Latin America theater movement, and we need to provide a platform and more opportunity for Latino theater artists,” Cano says. “I think its tricky when you try to speak for a community and not with a community, not from within.”

Rose Cano will be performing at the Crosscut Arts Salon on April 28 at Rainier Arts Center. Then, she along with Prometheus Brown, Tracy Rector, Donald Byrd and Davida Ingram will discuss the intersection of art and race. There will be a limited number of tickets at the door and you can register for the waitlist here. The Arts Salon is co-sponsored by the City of Seattle and the Office of Arts and Culture, in cooperation with Crosscut.