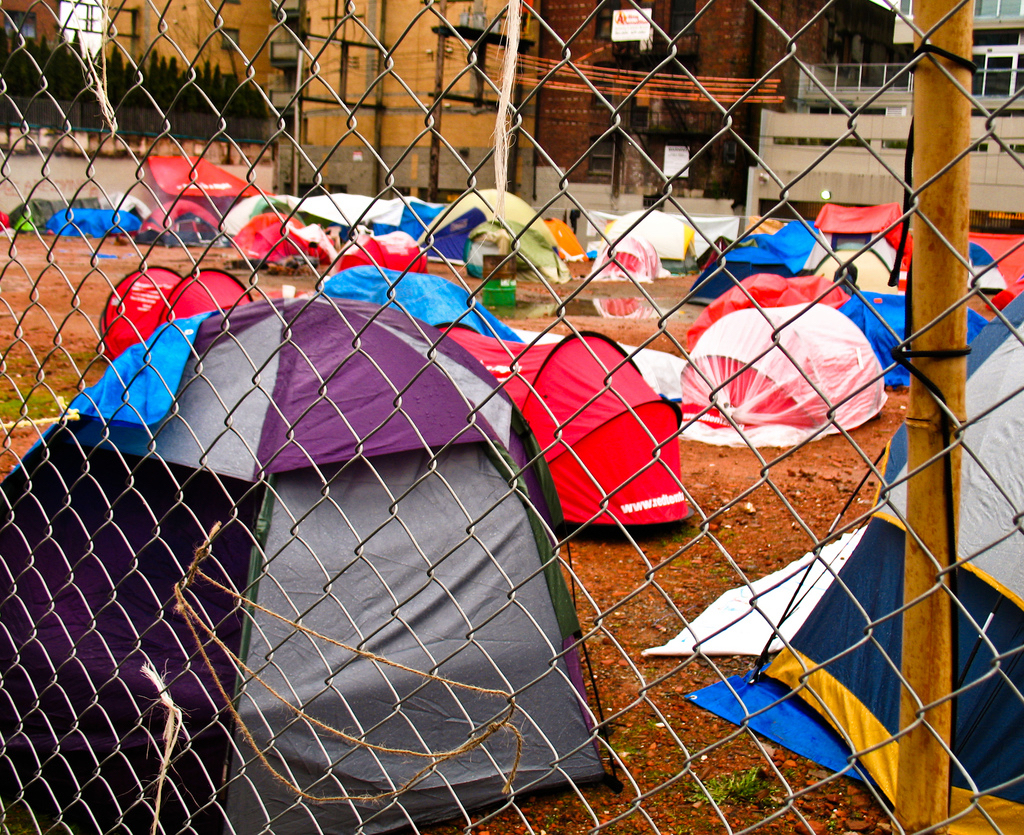 A tent city in Vancouver.

Next winter, 100 homeless people might set up a tent city on the UW campus, to serve as their home for 90 days. If it happens, it would be a first for the University of Washington, although it'd be at least the fourth time a tent city has come to a four-year college campus in Seattle.

Based on how it’s gone previously, advocates say, it should be a valuable experience for students and homeless residents.

UW President Ana Mari Cauce announced in a letter to the campus community on March 31 that a tent city could come to the UW in winter 2016-17. The university is still seeking feedback on the proposal, but so far it’s seen unprecedented progress.

Hosting a tent city at the UW has been at least nine years in the making for campus activists, who have seen other area universities move forward on the issue. Most recently the Tent City Collective (TCC), a group of students, alumni, community members and homeless residents of an encampment called Tent City 3 has taken up the effort at the UW.

Tent City 3 is one of a handful of tent cities in Seattle. Established in 2000, it’s a democratically run homeless community of no more than 100 people at any given time. The encampment rotates locations throughout the year and usually stays on church properties, though it was also hosted by Seattle University in 2005 and Seattle Pacific University in 2012 and 2014-15.

Bringing TC3 to the UW would tie into the university’s public service mission, TCC believes.

The first words in President Cauce’s letter to the campus community alluded to public service, declaring, "Our city is facing a crisis." Seattle Mayor Ed Murray and King County Executive Dow Constantine have both declared homelessness a state of emergency. Early this year, the annual One Night Count found 4,500 people without a home in King County.

Tent cities are sometimes criticized for not offering a more permanent solution to homelessness. TC3 provides shelter for 100 people at most, sometimes less (at the moment, according to resident and TCC member Marsha Efange, TC3’s current location can only hold around 70 people). According to Hana Alicic, lead organizer of TCC and a recent UW graduate, the temporary housing provided by tent cities is still valuable.

“We very much want for everyone to be in housing, absolutely believe in the housing-first model, but we recognize that, in the meantime, people have to be housed tonight, and that tent cities offer a really safe way to do that,” Alicic said.

There are other reasons hosting a tent city would fit the university’s mission, according to TCC members.

At a public forum last week on Cauce's proposal, TCC member and UW student Leigh Friedman read from the UW’s mission statement: namely, to educate students to become responsible citizens and leaders, discover solutions to complex problems and enrich the lives of others. “When I hear that, the question isn’t why we want to bring Tent City 3 to UW. The question isn’t, how does that fit into our mission? The question is, how does that not fit into our mission?” she said.

Students are more connected to the issue than they realize, Friedman said. “One of the biggest issues on students’ minds right now is housing affordability. It’s the same issue as homelessness, just a different side of it.”

The proposal would not have gone as far as it did if it had it not been closely connected to the university’s mission, Alicic believes. But Cauce's interest in the idea is a break with the recent past. In 2009, then-president Mark Emmert vetoed the proposal for a tent city despite its approval by the student, graduate student and faculty senates. Emmert said a tent city would “complicate the business of the University,” and didn’t fit with the university’s mission.

Public service is only part of it. If TC3 comes to the UW, it would also become part of class syllabi and curriculums — as it did at Seattle U and Seattle Pacific. There are already tentative plans for a class to educate students of pharmacy, dentistry, medical, nursing and social work on health services for the homeless, and TCC has met with 25 faculty members who are interested in using the tent city in their classes somehow, according to Friedman. (TCC stresses that being part of classes would be optional for camp residents.)

Friedman, who studies public health at the UW, said learning about homelessness really requires stepping outside the classroom. In her classes, students learn about homelessness as an indicator of public health, or a specific population to be served. “That’s very, very different," she said, "from actually understanding from the ground what people experiencing homelessness in Seattle, the range of experiences that they’re facing.”

When TC3 stayed on the SPU campus, residents were invited as guest speakers to talk to classes, and academics carried out sociological research. Those who were part of the hosting of TC3 at SPU remember the unplanned interactions between students and residents, and the sense of community there. Owen Sallee, coordinator of student involvement with the tent city, said that after hearing residents’ stories and touring the camp, students’ understanding of homelessness changed.

“They came away with a sense that the people that were camped out in the lawn there weren’t helpless, and they weren’t in need of charity as much as they were in need of partnership,” Sallee said.

Roger Franz, a former resident of TC3 who worked as an adviser for the camp for more than four years, lived at SPU both times it hosted the tent city. It was a positive experience, he said, and residents enjoyed meeting and talking with students, whether about homelessness or “the nature of God, the universe and everything.”

Sometimes, Franz saw students’ preconceptions about homeless people melt away. At first, they were hesitant and timid around the residents.

“Part of that is the stereotype of homeless people,” Franz said. “Well, once they saw that we were just ordinary people, everything started to change.”

TCC member Efange, who is kitchen coordinator for TC3 and has lived in the encampment for almost two years, said SPU was the best location she’s experienced. She was humbled by students’ interest in helping residents. Some students gave the residents haircuts, others offered massages, and people brought each resident a cupcake on their birthday. “They went out of their way to really make us feel like royalty,” she said.

Heather Bean, who was student liaison to TC3 at SPU, thinks students can learn a lot from meeting people from backgrounds different from their own, since, she says, “College is kind of a bubble.” Her advice to UW students, if TC3 sets up camp there, is to come by and meet the residents.

Sally Clark, director of regional and community relations at the UW, led last week's forum at the University Congregational United Church of Christ, which hosts TC3 in its parking lot. Both church and encampment lie a stone’s throw away from the big W sign at the entrance to campus.

So far, according to Clark, more than 25 possible locations have been proposed for a tent city on campus, though iconic UW spots like the Quad and Red Square have been ruled out because they’re so heavily trafficked. Of the six top locations, most are on parking lots relatively far from the heart of campus, although one lies partway between the Husky Union Building (HUB) and Husky Stadium. Any site must be at least 10,000 square feet, preferably on a hard surface to deal with weather problems, and close to a bus line, electricity and water, said Clark.

Of course, the idea has its skeptics. The most common concerns are about safety, said Clark, and about possible costs to students of temporarily making a parking lot unusable. As she points out, “We are a campus in which every inch is spoken for.” Cauce has promised that no taxpayer or tuition dollars will be spent on the encampment.

At the meeting, people raised the safety and parking concerns, with some questioning the value of tent cities themselves.

Brittania Houston, a graduate student in business at the UW, said she was swayed by some of the arguments for tent cities, but overall said she wanted more data about their efficacy.

“I’m not convinced that everybody who’s living in tent city is actually pursuing transition, and the team tonight that’s representing tent city didn’t really convince me,” she said.

The tent city proposal has passed the student senate at UW. It also needs to go through the faculty senate in May. Clark said the university is looking for feedback, which might be incorporated into the planning process.

For TCC members, there’s great value in bringing a tent city to the UW.

“One’s university taking a stand and saying, ‘The things that you’re experiencing are A, something our society created, and B, something that we as a community have a responsibility to address,’ is a really powerful statement,” said Alicic. “I really hope that that inspires students to start thinking about their own role in the world and the change that they can effect throughout their work.”