Police killed his brother. Andre Taylor wants to change how they're prosecuted 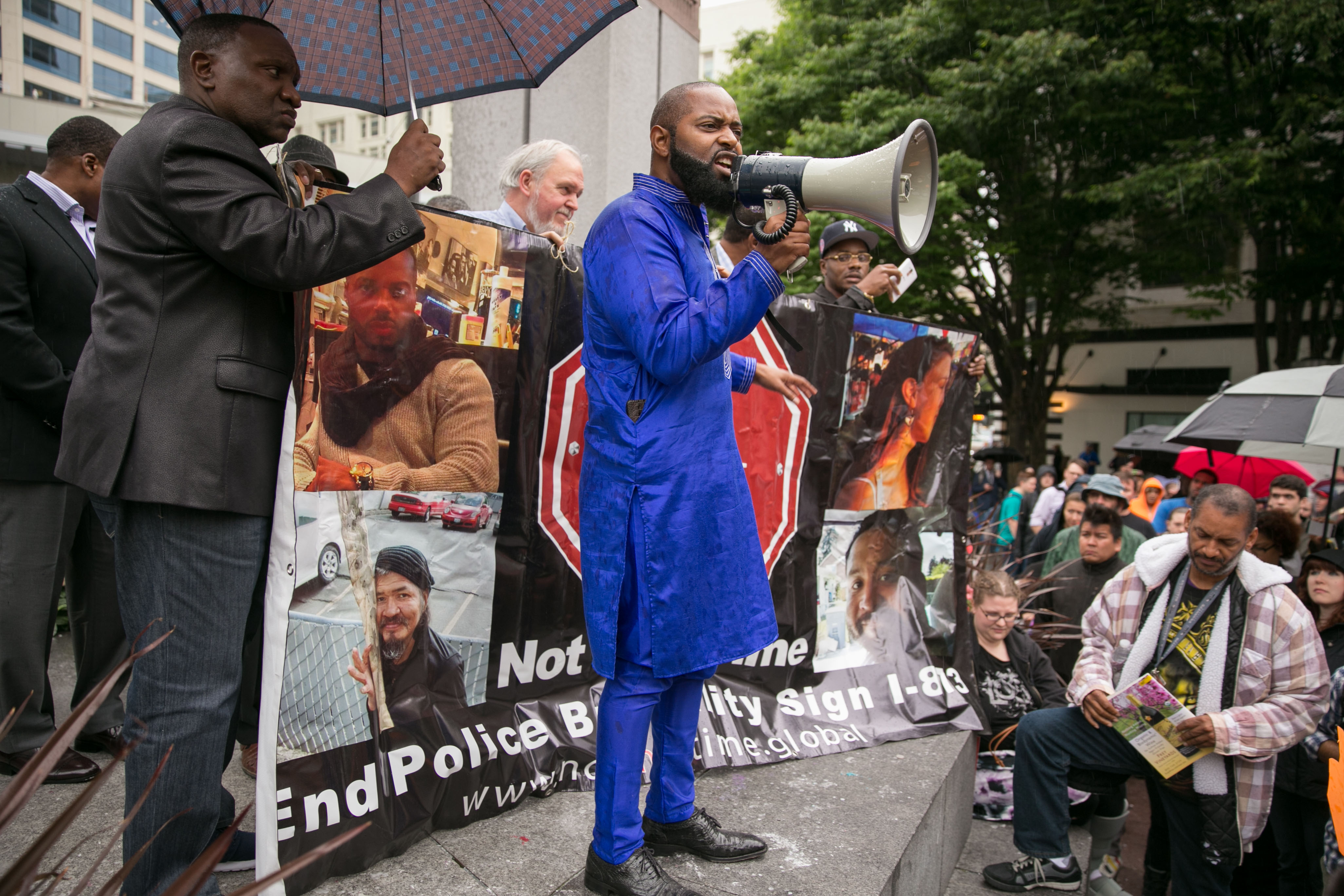 Andre Taylor, Che Taylor's brother, speaks at a vigil for those killed by police in July 2016.

The system has never been kind to the Taylors. As the War on Drugs infiltrated black and brown communities in the ‘80s, Che Taylor’s mom was arrested for selling and using drugs, and he and his sister Devitta Briscoe would spend holidays with her behind bars. Che’s wife Brenda Taylor lost her uncle, Erdman Boscomb, in a botched police raid. He was on his couch, a television remote in his hand, when the SWAT team busted through his door. The police thought he was holding a gun.

And when Che was shot and killed by police in North Seattle last February, the family only learned through the community grapevine, says Brenda. No one from the city called them. At Harborview Medical Center, the staff were hesitant to speak without approval from the police department. Che died quickly, but it was six hours before the family got a cold confirmation of the fact from a detective.

And yet, every Wednesday, Che’s brother Andre gives a surprising sermon at the weekly meetings of Not This Time, the campaign he set up after Che’s death: work within the system. Andre is leading the charge on statewide initiative I-873, which would make it easier to prosecute police officers in Washington state.

In the wake of yet more brutal videos of police killing black citizens — one of Alton Sterling near a convenience store and another of Philandro Castile fading away after being shot in his car — Andre’s message of working with the system doesn’t resonate with everyone. At a rainy vigil for Sterling and Castile in Westlake Park Thursday, a young black woman shouted at Andre from the crowd as he spoke about I-873.

“Public servants are murdering people in the streets!” she yelled. “It is sanctioned state murder! You cannot expect justice from the law! As long as they keep murdering us, the police and the law are completely illegitimate!”

Andre understands this is how a lot of black people in America feel, but has become convinced that to make lasting change you have to bring along white and mainstream America.

“I’m not saying you’re not right,” says Andre. “I’m saying it’s not going to work….What I’ve realized is that the system does not respond to people’s pain. It responds to people’s organizing. If pain and hurt is not bridled, it can lead to individuals acting out on that pain. A lot of times what you see in the media is to deflect some causes because of violence. … I believe that you have to infiltrate the system. You can’t infiltrate the system if you’re coming in hostile.”

With this in mind, Andre flew up from Los Angeles the day after Che was shot, and hasn’t left since. He started Not This Time. He recruited legal help to draft I-873, launched social media campaigns to find volunteer signature gatherers, and met with Seattle Police Chief Kathleen O’Toole. And he and Devitta took the black church community to task for not supporting the cause more forcefully.

At Thursday’s vigil, where pastors were out in force, it was clear his efforts were beginning to bear fruit.

Che was a popular kid. He was handsome and dressed well and he knew it. Those closest to him call his personality “big,” a guy who stopped the show when he walked into the room. “Che had an uncanny way of making everyone think he was their best friend,” says Andre.

Che shared a mother with his sister Devitta and a father with Andre. Che and Andre’s dad was a “hustler” — a “gentleman of leisure,” says Andre — selling drugs and pimping. Che and Devitta’s mom got caught up in the drug scene, living off and on in a crackhouse before being arrested.

At a certain point, says Andre, there was a “turning point” when Che “felt he needed to be a man, when whatever remnants of being a child died.” Devitta says Che tried to grow into the patriarch, and with that he started hustling too.

But it was only a matter of time before Che started using as well. “He tried to learn the ropes of what my mother was doing,” says Devitta. “Then I watched him deteriorate. I watched him develop an addiction to crack. So now he wasn’t Che the football player anymore…. His main drive from thereon was just getting his next hit.” Che, says Devitta, was turning into what pained him most about his mother.

When Taylor was 21 he and a friend broke into a trailer in Kent because they thought there were drugs there. Taylor admitted at the time that things turned violent and that he’d assaulted several people inside. He did not admit to the most serious accusation levied against him: rape. Nevertheless, the court found enough evidence to charge him in the first degree.

When King County Judge Norma Huggins sentenced Taylor to 25 years in prison, Devitta remembers the judge saying one thing during sentencing as she reviewed the details of his upbringing: “He never had a chance.”

Che’s stepdaughter Demeka Green says that, even from behind bars, Che was the patriarch, the center around which the family orbited. In fact, when Demeka was just about ready to give birth last October, Che begged, nearly commanded, she wait until he got out.

Within 24-hours of his release, she finally had her baby.

To Taylor’s friends and family, his past had no bearing on how they viewed him as a man. Reactive? Maybe. But, says Devitta, “If he did any wrongdoing to you he would look you in your eyes and he’d have tears in his eyes. He would be sincere when he apologized if he had done anything to wrong you.”

“Che would be your number one cheerleader to encourage you in any endeavor you sought out to do. If you wanted to start your own cupcake business, he would be the person to tell you that you could do it and make you believe you could do it.”

“He was everything to me,” says Demeka.

But where Che’s family knew the man, law enforcement knew him as a felon. After he got out of prison, police were quick to suspect him of returning to pimping and dealing drugs.

When they spotted him in North Seattle, an officer believed he saw a gun on Che’s hip. As a felon, that was not allowed. In a coordinated approach, officers cornered his car. They said he reached for a gun, so they shot him.

Che’s shooting was not met with the same national attention as the shootings in Baton Rouge or Chicago or North Carolina. In the days following the shooting, the police posted pictures of a gun they said Che had in his car. Mayor Ed Murray quickly said he thought the shooting looked justified and expressed great confidence in the reforms of the police department to properly investigate his death.

But it was all connected to his past; the fact that he was a felon was hinged to every story of his death, an occurrence condemned by local police reform advocates like the Public Defenders Assocation. That the police knew who Che was told those who cared for him that he was targeted for his reputation.

Brenda just remembers screaming when she heard the news of his death. The whole nightmare unraveled in such a perplexing way — with information guarded by hospital workers and detectives and so much talk about his past — that it was not an impossible leap toward framing, an accusation levied by the local NAACP. There was little discussion about the big, charming man they knew — only about his record.

When the shooting was ruled justified by the department’s force investigation team, the verdict surprised no one, but did nothing to convince his family the shooting was in fact justified. This was simply how the system functioned. And that’s what Andre is out to change.

Andre Taylor is a man in control. His beard is impeccably groomed, his dress spot on, his speech measured. In the hours after his brother’s death, he released a tearful video on Facebook, but since then has been almost unnaturally stoic in public. But his inner intensity sneaks out as he nails certain words for emphasis.

At some point, Andre says he made a decision — he’d be entirely rational about everything he did in the wake of his brother’s death. To a certain extent, that means controlling the pain he feels. Watch him onstage and you can see it in his eyes: a fierce determination, a levee holding back a flood.

“Not that I do not feel, because I’m devastated. But I have to use that [devastation].”

The language behind I-873 is only two pages long and takes on only one specific part of Washington law: 9A.16.040(3), which says police officers can only be prosecuted for use of force if it can be proven they did so with “malice.”

Reform advocates find the entire section on use of force problematic, but prosecutors most commonly use the so-called “malice clause” as reason to not bring charges. Most famously, King County Prosecutor Dan Satterberg did not charge Officer Ian Birk — who shot the hearing impaired, unarmed Native American woodcarver John T. Williams in the back — because of this clause.

Changing the clause is not the table-flipping some would like to see in American policing. Washington law is among the most restrictive in the country when it comes to charging police officers, and repealing the clause would essentially bring the state to par for the course.

But the change is easy to explain and easy to sell, and the campaign doesn’t scare away politicians who are deathly afraid about speaking as bluntly about policing as the woman at Thursday’s vigil.

Andre’s steady approach has begun to attract the mainstream as he intended; Both Smith and Mayor Murray can endorse the initiative while still praising police and the law enforcement profession.

There is a significant contingent of people, both locally and nationally, who believe that tweaks to the law are not good enough, that the system as a whole is set up to repress people of color.

It’s hard to know if there’s a part of Andre that feels this way. If so, his cover is thick enough to lid those feelings. But for now, he and his sister Devitta are playing the game, hoping this campaign will change things from the inside out.