Amazon’s spheres are out of a dystopian nightmare 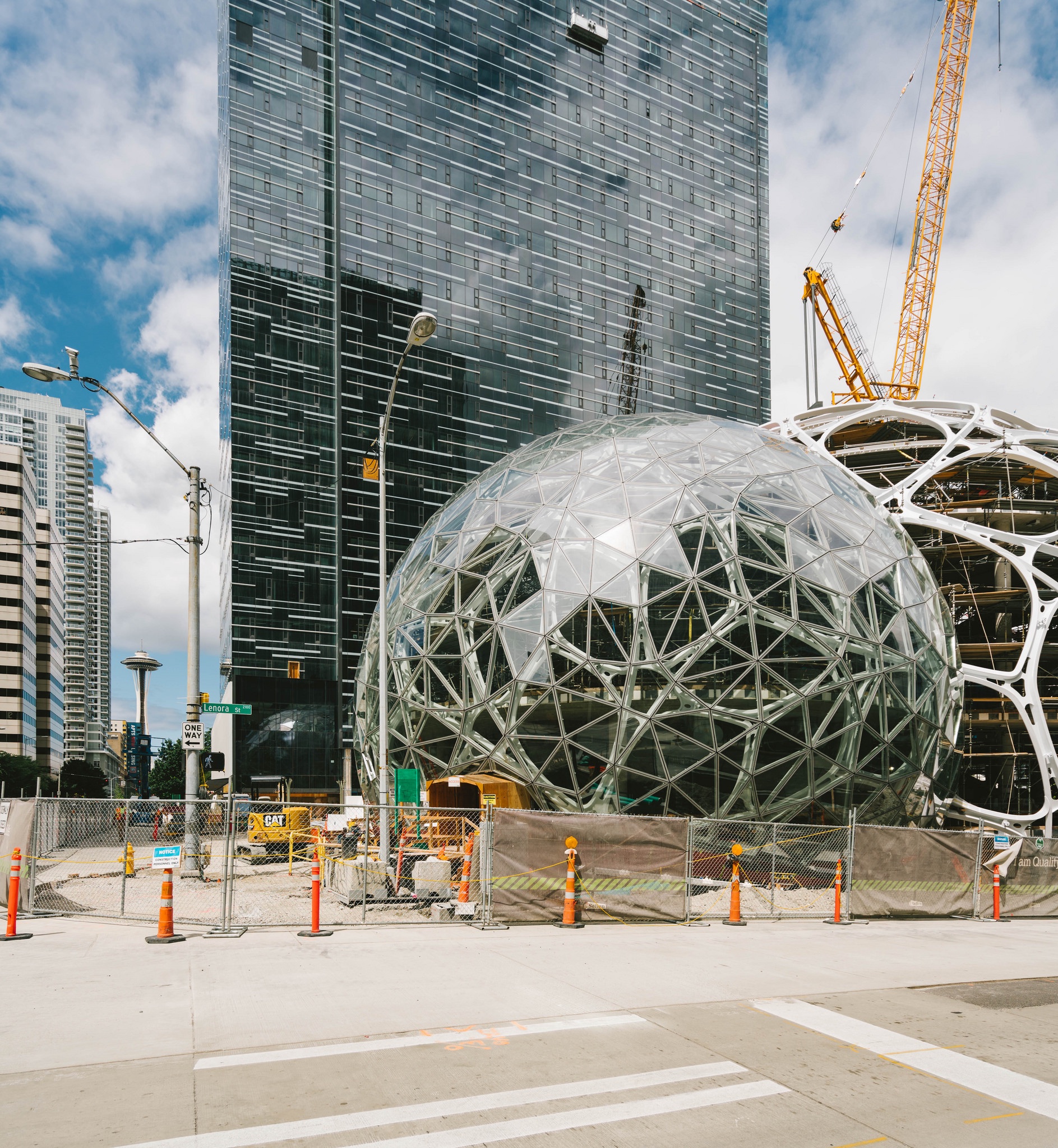 They may not open until early 2018 but Amazon's Spheres are drawing attention while they are under construction (July).

Every time I pass by the Amazon spheres at Seventh and Lenora, my mind wants to go to Buckminster Fuller. Instead, it goes to Bruce Dern.

There’s a larger problem here between expectations and delivery, too. Amazon’s project provokes interest from the general public but there’s not much more for most of us.

Let me explain about the charismatic Fuller and longtime Hollywood star Dern. Buckminster Fuller was the genius architect/philosopher and proponent of the geodesic dome as an ideal form of building, enclosing the largest amount of space with the smallest amount of material and effort. You can argue both sides of his theory. But Fuller’s path-breaking work went on to inspire hundreds of buildings, mainly for two vastly different purposes: in hippie communes and for radar domes dotted across Alaska to spot any incoming Soviet missiles.

But, passing the spheres, my mind turns toward Bruce Dern. Before his name became linked with unhinged characters that were angry, alcoholic or just plain deranged, Dern played the lead role in a mostly forgotten sci-fi film called Silent Running, which was released in 1972. In Silent Running, Dern plays an astronaut scientist entrusted with the last of the world’s plants, which are tucked into multiple massive dome structures. Dern and his crew of robots tended the massive terrariums as they roamed through space awaiting discovery by a less self-destructive civilization. A dystopian nightmare even if a somewhat hopeful one.

Here in Seattle’s part of the Earth, we can observe the completion of what are essentially Godzilla-sized versions of the spherical terrariums filled with tiny plants that you can buy in garden shops. This is ostensibly a hopeful architectural, ecological, and behavioral experiment: Do people work better and are they happier while working inside a glass ball filled with plants?

The embodiment of this experiment in spherical form seems a tad odd. Could you not also prove that in a more conventional building? In fact, people have been experimenting with blending plants and architecture for decades. And generally, the outcomes have been positive. But one wonders, Will the adjacent more rectilinear Amazon office buildings also be chock full of plants for comparison? Is a sphere better than a box?

One troubling aspect is the physical form itself. Cities employ an architectural language to communicate. We rely on a vocabulary of physical forms and features to navigate places on a daily basis. Most buildings stay pretty much in the background — at least at eye level.

For commercial buildings, there is a fairly consistent relationship to the adjacent sidewalk, with windows and doors along the ground, typically at right angles. After all, we are vertically erect bipeds. When buildings break this usual relationship it is a usually for a special reason – the buildings are public. Unique forms denote shared places that serve as important reference points. Some Seattle examples of this are the Central Library, City Hall and Benaroya Hall. But examples can be found in every city.

These are our museums, libraries, churches, concert halls or city halls. All of these building types invite the public in. They are shared public goods.

The Amazon spheres suggest they might be for some collective use, but they are not really. The New York Times recently said only Amazon employees would be allowed (“the company may eventually allow public tours”), but a corporate spokesman quickly told the Puget Sound Business Journal that there are still plans for the public to be able to use commercial space. The Journal suggested, though, that the commercial space would likely be limited to restaurants.

So, essentially, the spheres will be private work spaces when they open — likely in 2018, according to the Times — accessible only to select people wearing swinging badges. The spheres in a sense are a huge architectural tease — intuitively they feel like they should be open to the public. Yet, they are not.

The spheres might have been used to illustrate and interpret how people have used technology to communicate. They might have housed a “cathedral of commerce,” explaining changes over time in global trade. Or they might have served as an iconic symbol of a foundation (like the Ford Foundation in New York) dedicated to delivering needed goods and services to Third World countries.

But no. This grand gesture is meant only for Amazonians.

Without a doubt, the curving white, organic shapes comprising the skeleton of the spheres are visually striking, as if someone discovered a new elastic form of steel that can momentarily stretch like silly putty and then be frozen in place. The tendril-like spans surrounding ovoid holes almost appear like some machine built by an extraterrestrial invader.

The architectural renderings shown to the City of Seattle for review depicted a specific visual effect —  a white skeletal structure visible through a perfectly clear glass bubble. The reality is quite different. The outer glass skin is divided into faceted segments. Each glass panel is held in place by a metal frame. The arrangement of the metal frames sometimes coincides with the white skeleton structure but sometimes does not. The combination of facets and frames effectively obscures the view of the white skeleton, diminishing its impact enormously. One can see this effect quite vividly now, with glass covering some but not all of the structure.

Moreover, the frames for the glass facets are hefty enough that they set up yet another type of geometry — one that competes with the white network. As the flat facets twist and turn in their positions, they become opaque, blocking the view of the internal organic structural system. This unusual composition of engineering, architecture and construction methods surely involved a very sophisticated design process. It’s hard to believe that computer simulation would not have revealed this self-cancelling effect.

Finally, many buildings get more interesting the closer you get. You see more detail, more activity, more chances to enter and interact with the building and its uses. The spheres are essentially one-note.

You can stand in one spot and take in the entire thing. Perhaps that is why, when I’ve seen people take photos of the spheres, they take one shot and walk off. No need for any others.