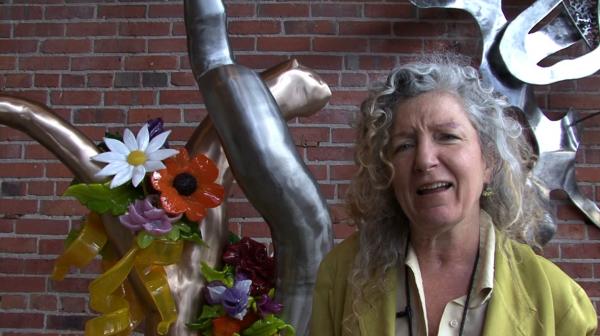 In the mid-1980s, glass was the happening medium in the U.S. art scene, and Seattle was its hub. While the Pilchuck Glass School and Dale Chihuly’s growing fame gave credibility to the genre, glass art still had a wild, collaborative and experimental vibe. This was an environment in which Ginny Ruffner thrived. Ruffner (you’ve seen her gargantuan flowerpot on the corner of 7th and Union downtown) became internationally known for her lampworking, a technique used to manipulate molten glass.

Of course, Seattle today looks very different from Seattle 30 years ago, when Ruffner was a rising star. But Ruffner is not one to get left behind. These days, she’s more focused on exploring new mediums, including a couple that are at the center of things in the Seattle of 2016: virtual and augmented reality.

At an event at the Seattle Art Museum earlier this month, Ruffner launched her most recent project, “Poetic Hybrids,” an interactive art experience inspired by science and created via augmented reality technology.

“Explaining this project is really difficult, because it’s so complex,” Ruffner warned me as we sat in her home and studio in Ballard. Complex in that, more than anything, “Poetic Hybrids” is conceptual, aligning Ruffner’s interests in science, tech and collaborative art, even while she stays hands-off during the actual making. I went to the event to give it a try. Here’s how it went down:

There were three stations set up in SAM’s sleek and airy lobby. The first was inspired by Ruffner’s interest in genetics, a topic she’s been reading up on and drawing from for years. After interviewing researchers from the Institute for Systems Biology in Seattle and the HudsonAlpha Institute for Biotechnology in Huntsville, Alabama, where Ruffner spent time as an artist in residence, she made a list of 23 words the scientists used to describe “what they find beautiful in their research, what’s their motivation, and why they’re scientists,” Ruffner explained.

At SAM, participants were asked to choose two words from the list and then make a drawing somehow inspired by these words. My choice of words: “emergent whirling.” How to draw that? Hmmm … not so obvious, especially since I knew the intention was to use the drawings as templates for 3D objects. But that’s kind of the point. “I want people to believe in their own creativity,” Ruffner said, a process she’s spent a lot of time thinking about. “That is the ultimate goal, to allow people to have a chance to be creative.”

The drawings were then passed on to graphic designers who used programs including Blender to craft 3D models of a selection of the sketches. Large monitors projected their works in progress so that participants could get an over-the-shoulder view of what they were doing. Watching the modelers at work was mesmerizing. Multiple elements simultaneously progressed on the screen, almost like watching an organism multiply. Lines lengthened and nudged into place, and sometimes the whole form twisted and turned in a three-dimensional space, eventually emerging as a rendition of the original drawing.

At the third station the models became sculptures — sort of. They were printed onto paper that looked blank to the naked eye, but holding an iPad in front of it revealed a representation of a three dimensional object on the screen. The task of participants was now to color in all directions. This is the part Ruffner is most fascinated by.

“The thing about technology is it’s both the means and the end. It’s not an object, it’s much more in the mind,” Ruffner said. “It empowers the viewer, because their will becomes an integral part to the existence of art at all; they have to be willing to hold the device up.”

In a lot of ways, Ruffner seems like an unlikely champion of new tech as an artistic medium. The walls of the room in which we sat in her Ballard home and studio are covered with her skilled drawings and paintings, mostly depicting various flora and fauna, that seem firmly rooted in the natural world rather than a virtual one.

Following a car accident when she was at the height of her career, she had to doggedly relearn how to create the types of art she had become known for — after weeks in a coma, she woke up without the ability to walk or talk. “My mind was like a big empty house that you know you used to live in,” Ruffner recalled in the documentary, “A Not so Still Life.” “If I wasn’t so fricking stubborn and bullheaded, I wouldn’t be here.”

And then there’s the fact that, well, she’s 64 — not exactly the usual demographic for early tech adopters. But it’s that very kind of thought that drives Ruffner to keep expanding what she does. “I don’t like to be limited,” she said in the soft, breathy voice she gained after teaching herself how to talk again. “If you’re a curious person, you want to do more and more. I can’t imagine just doing one thing.”

After auditing classes in virtual reality at Cornish College of the Arts for the past two years, she has high hopes for creating with the technologies that Magic Leap—the notoriously secretive company that Wired Magazine has called “the world’s hottest startup”, and to which Ruffner has ties—and other virtual and augmented reality companies are developing — she just wishes they could come out with them a little faster.

“Technology is now where glass was 50 years ago, when it first started,” Ruffner said. “In order to be art, it has to go beyond the ‘oh wow’ factor.” With her track record, it would seem that if there’s anyone who can elevate a new medium into art, it’s Ruffner.

A previous version of this article incorrectly stated that Ruffner's project used technology from the augmented reality company Magic Leap. Magic Leap has yet to release any of their products.