Mayor: New taxes may be needed to fight homelessness 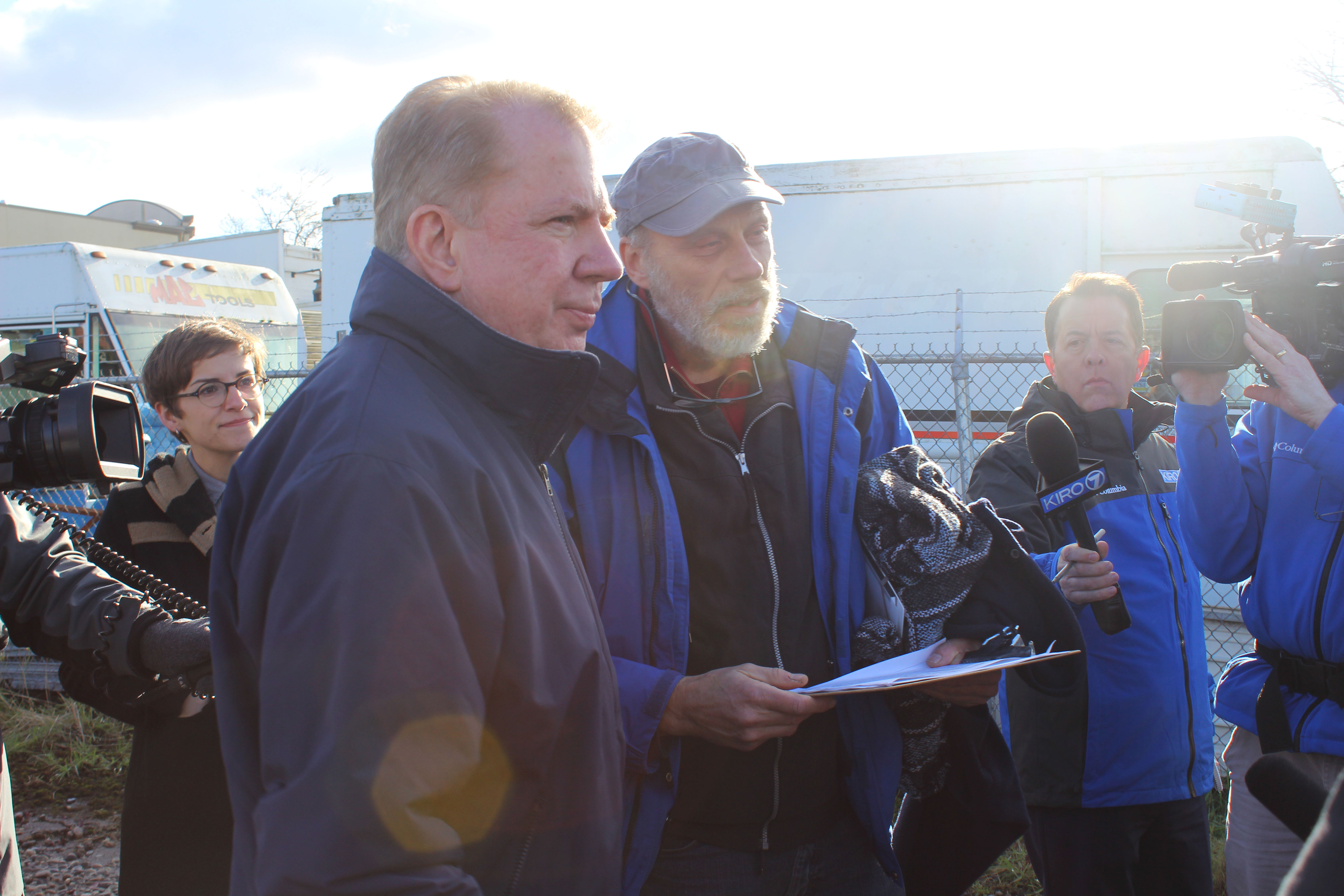 Ed Murray speaks at the Interbay homeless encampment in 2015.

Hours after a young man camped near a University District off-ramp was struck by a car and killed, Mayor Ed Murray spoke from the scene. And for the first time since he declared a homelessness state of emergency last November, he seemed to admit that his calls for help from the state and the feds were ringing hollow. Seattle, he said, would need to engage in a “conversation” around raising taxes to combat homelessness.

The state of emergency Murray declared was always more of a bat signal than a proclamation with substance. While it did, theoretically, give the mayor the scissors to cut through red tape, he has only very occasionally used those powers. His hope, which he has stressed repeatedly since day one of the state of emergency, was to bend the ear of the federal and state governments to tackle a problem which spans more than just Seattle.

By the end of 2016, Seattle will have spent about $50 million to combat homelessness. Despite calls to go higher — dipping into rainy day funds to do so — Murray has resisted, arguing that to go higher would take painful cuts elsewhere he’s unwilling to make.

That’s not to say Murray felt $50 million was enough, simply that the city couldn’t afford it without help.

For months, Murray showed optimism that help would come. He and others in City Hall made trips to Washington D.C. and lobbied in Olympia to boost funding. While he never fooled himself into thinking the resources would come quickly, he maintained hope that they would, one day, arrive.

Nearly a year later, that optimism has faded. “We in the city can no longer expect quick action from the state and the feds,” he said Monday. And for the first time, despite the recently approved $290 million housing levy, Murray brought up the possibility of raising taxes to supplement what has not — and perhaps will not — arrive from outside the city.

Murray wanted to be clear he was not proposing taxes, simply the “conversation.”

Also haunting the mayor’s visit to the scene of the young man’s tragic death is a political fight. Although the mayor made a point of drawing the conversation back to the man’s death, the fact is, Murray is in something of a battle with some members of the Seattle City Council and homeless advocates over how best to address homeless encampments in the city.

Advocates are pushing for an overhaul of the way the city addresses encampments, placing more requirements for outreach to encampments not imminently dangerous. Murray has claimed this proposal would open up the city for campers to stay anywhere and make it impossible to enforce existing laws. The advocates, including the ACLU of Washington, Columbia Legal Services and others, have called this hyperbole and a twisting of their message.

For Yurij Redensky of Columbia Legal Services, today’s incident represents exactly why the city should take up the proposals. “To the point that the mayor’s trying to maintain the status quo…I would say that they didn’t intervene with this particular incident,” he said over the phone. The new proposal would, he said, would create “important carve outs” for “unsafe and unsuitable locations, at which point [the city] would provide 48 hours notice to move and move them somewhere that is not unsafe or unsuitable.” Camping on an I-5 on-ramp would be considered unsafe.

Unchanged is the mayor’s core message: homelessness is a systemic issue, based in broader realities of income inequality. On this front, there is little disagreement. But the response to that is far from a consensus. Murray pointed to today’s tragedy as proof that the city should be “committed to the reform of our homeless system that I outlined last week” in the long awaited consultant’s report from former Obama administration official Barbara Poppe.

But while that report takes on the system, it does not tackle the question of encampments. Poppe essentially detoured around the controversial topic, but Rudensky doesn’t think it works that way. “My view is that, before we can talk about these lasting solutions, to make sure that we’re at least making progress [on encampments].” For example, he said, “The city’s current response makes it hard to have a coordinated entry system because people are tying to find little nooks and crannies around the city where they won’t be subject to removal."

In the coming weeks, the council will debate not only the encampment proposal, but also the results of the Poppe report, the forthcoming recommendations from the so-called Opioid Task Force, results from the mayor's encampment task force and a resolutions on what to do with the area known as the Jungle. A busy time, now punctuated, as is often the case, by tragedy.