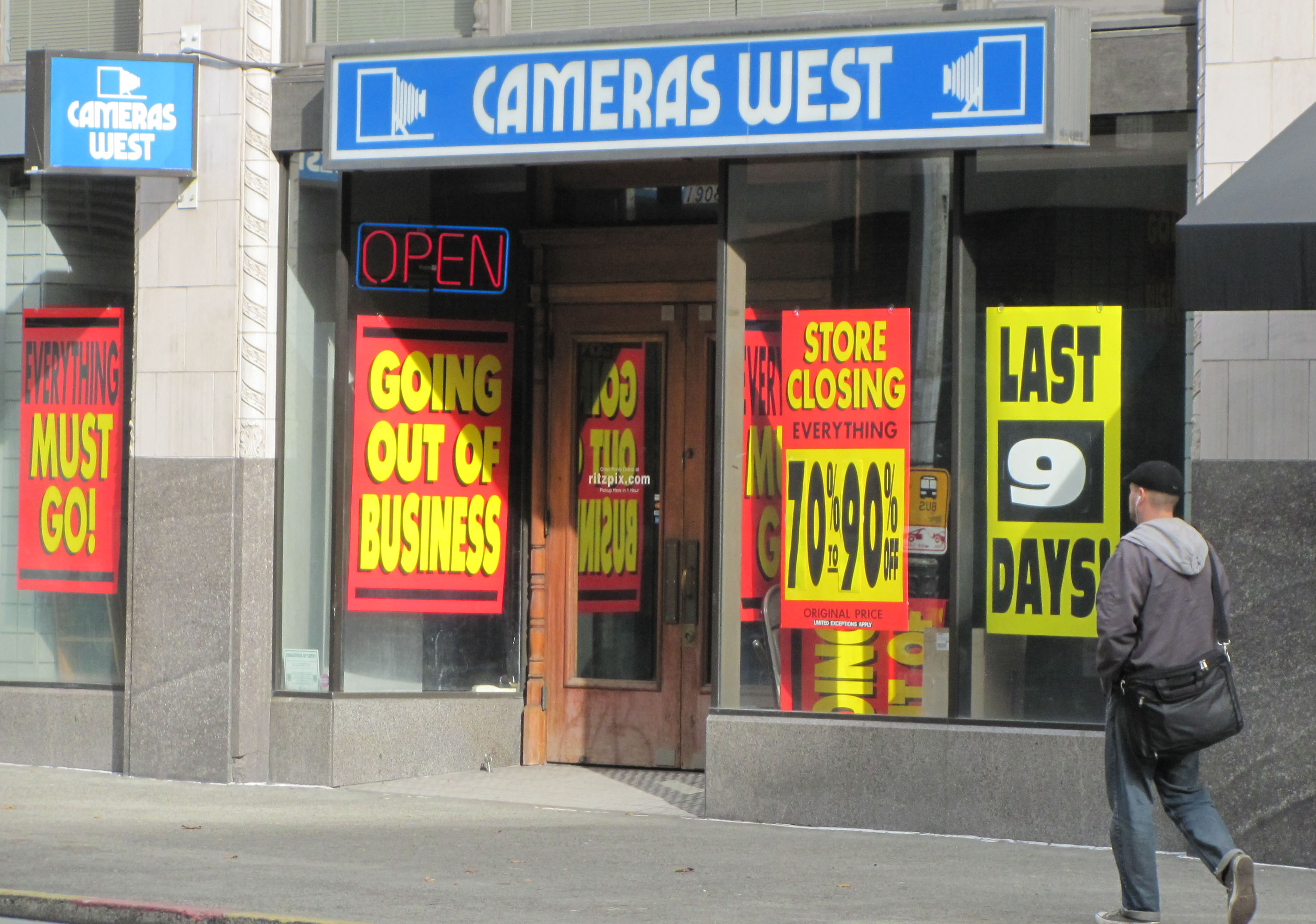 Cameras West in Seattle, which went out of business in 2012.

Eleven months ago, Seattle City Councilmember Kshama Sawant stood in City Hall with a group of small business owners to announce that she'd found a big loophole in the statewide ban on rent control: It did not apply to commercial spaces.

Not everyone agreed with this sentiment, but regardless, Sawant filed a statement of legislative intent, requesting proposals from small businesses on commercial rent control. As the councilmember representing Capitol Hill, this was her response to the deadly real estate market for many businesses in the area.

The mayor’s office responded by forming a task force (as Mayor Ed Murray so loves to do) to explore broad options for saving small business in Seattle, something that didn’t sit well with Sawant or councilmembers Lisa Herbold and Mike O’Brien. They openly questioned whether the task force would address the rent control issue.

Now they have an answer: Nope.

Today, Murray introduced the task force’s recommendations against a backdrop of King Street station’s stripped-down second floor, which he imagines could become a haven of small businesses. The proposals were the result of months of meetings between high profile business types like the Downtown Seattle Association and the landlord behind Melrose Market and Chophouse Row, as well as smaller business owners like Mariela Fletcher of Manila Manila restaurant.

The task force explicitly opposed rent control as an option.

"We talked about this a lot and there’s a lot of different reasons," said Shanti Breznau, a retail and restaurant recruiter in the Chinatown/International District. "The outcome of commercial rent control is really unpredictable because we don’t have models to look to."

Small businesses in Seattle face the same uphill climb as renters, namely that vacancies are down and prices are up. Beyond that, a lot of the new spaces being developed are big — too big for the likes of a place like Manila Manila.

No one would call tackling affordable housing anything close to “easy,” but there are tools: tenant relocation assistance, mandatory inclusionary housing, support from nonprofits.

Commercial affordability is more opaque. “There aren’t a lot tools,” admits Michael Wells, the onetime head of the Capitol Hill chamber of commerce who now represents small businesses for OED. What tools are available, he says, aren’t that sexy. “But they’re important.”

Arguably, the long-term plans are a little more intuitive than short-term. The city, poses the task force, can convert vacant, city-owned properties such as King Street station to house small business. It could push tax exemptions for landlords willing to provide affordable retail space. It could encourage nonprofit housing developers to include retail space.

Short-term options, however, are not quite so clear. For one, the city is not allowed to provide direct financial mitigation to small businesses. This topic came up in the context of the damage being done to the businesses along 23rd Avenue during construction. While the city eventually came up with $650,000 in mitigation fees, that was only because it was not technically city money, coming instead from a federal source.

So if the city can’t prop up business, what can it do? For one, it can partner with lenders to provide no-interest loans. This could be a useful resource, not just in helping small businesses get established, but funding renovations or buoying them for a period if they needed to find a new location.

The city is only putting $122,000 toward this proposal to start. “It’s better to start small,” said Murray, than to go big, screw it up and “see it in the headlines.”

The city’s recommendations also include consultations to businesses on how to streamline and navigate bureaucracy.

Of course, businesses fail all the time regardless of the environment around them, so parsing who gets help can be a challenge. One proposal in the recommendations is that of the “legacy business preservation,” which Councilmember Lisa Herbold has been spearheading lately. This would single out businesses that have been a major presence in the community and offer technical or promotional support should they need it.

“I expect a Legacy Business Preservation Program will give businesses a fighting chance as commercial rents increase,” Herbold said in a statement Wednesday. “It would be absolutely devastating to see a neighborhood business district become exclusively chain stores.”

Still, these recommendations tend to focus on the broader state of small businesses — increase development capacity, discourage box stores. For Tam Nguyen, owner of the Tamarind Tree and member of the task force, things are a little more immediate.

As first reported in the Stranger, the whole block near Jackson and 12th, in Little Saigon, is slated for redevelopment. Tamarind Tree is a successful business, so doesn’t need advice. But because of the redevelopment, its future is uncertain.

“I don’t know how active or effective [the recommendations] will be, especially on private-owned property,” Nguyen said Wednesday. "I don’t know if the city has a lot of leverage on it … For our concerns, we don’t what our future’s going to be.”

They could take out a loan as they look for a new location, but the restaurant’s place in the community is important. Unless Nguyen can work something out with the developer, there’s not much the city can do.

Councilmember Sawant couldn't immediately be reached Wednesday, but it's likely that she still supports commercial rent control. The councilperson is not one to back down from a proposal until every avenue is exhausted. But in the meantime, this one has been tabled.