Police body cameras to roll out by January. Maybe 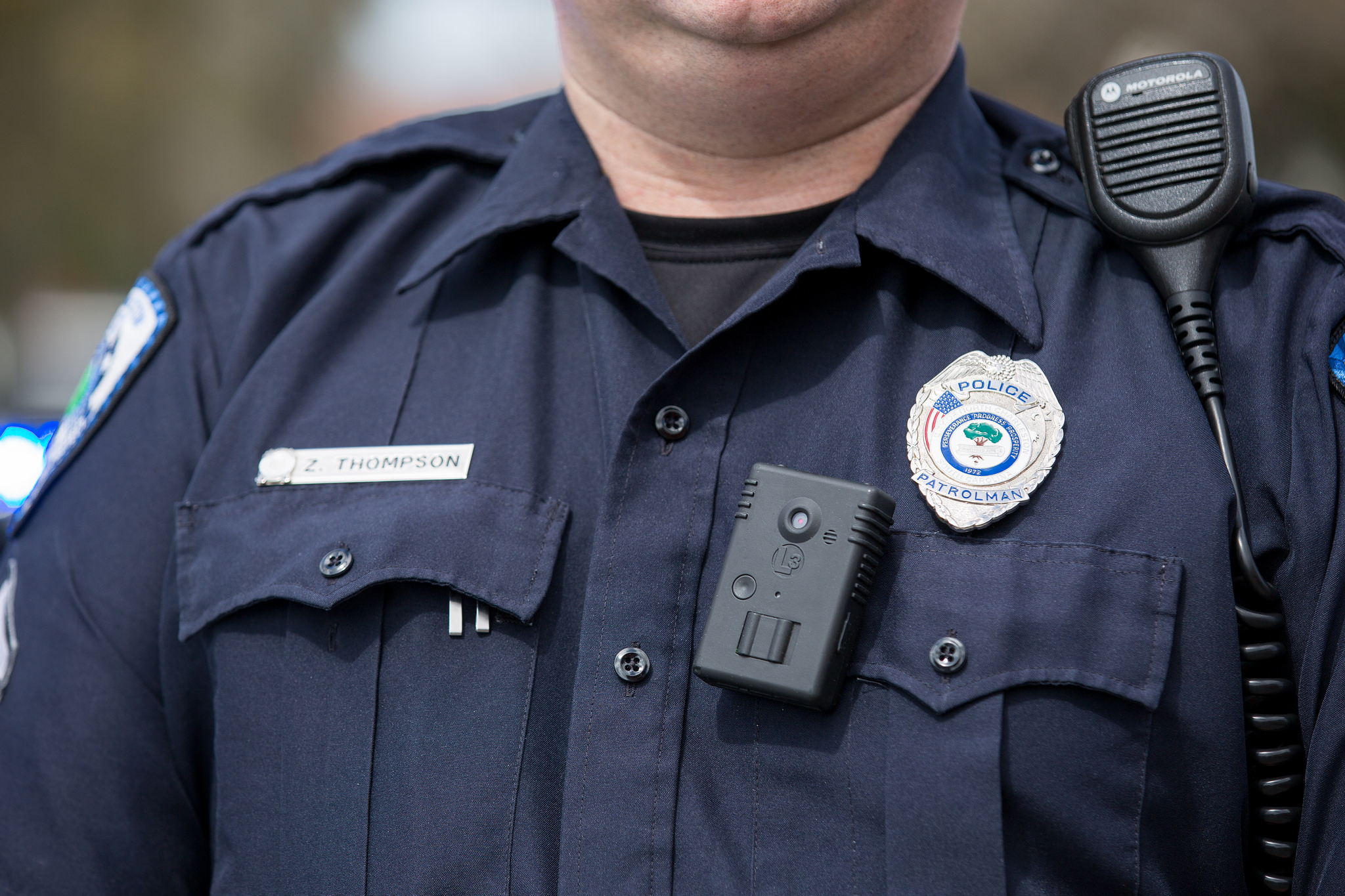 A police officer wears a body camera in Charleston, SC.

Even after the Seattle Police Department announced it had lost two days’ worth of in-car video footage this summer, the department’s brass is committed to rolling out officer body cameras by the end of this year. The bike unit would be first, said Chief Operating Officer Brian Maxey, with the rest of the department to follow in 2017.

But that decision, ultimately, is not up to the Seattle Police Department. It’s up to the Seattle City Council. And as we turn the corner into budget talks, not every councilmember is convinced that the city is ready for body cameras.

Following a short pilot program, Mayor Ed Murray announced full funding for body-worn cameras for police a year ago, at a price of $1.8 million (with $600,000 from the feds). “We know that body cameras improve interactions between officers and the public and reduce the likelihood that force will be used,” he said in his 2015 budget speech. “But I want to make clear: We will work carefully to get this right and adequately address privacy concerns.”

Murray found the confidence to roll out the camera proposal — often touted as a key to holding police accountable — after the monitor overseeing Seattle’s federally mandated reforms called for full deployment. However, the announcement came even as the results of the pilot program were still under review. As such, no final policy had been crafted.

Despite promising data on the effectiveness of cameras, the devil in the details has sown hesitancy among advocacy groups that might be expected to be their biggest cheerleaders.

That message made its way to the Seattle City Council, which placed a block on the money that only they can lift, ensuring time to review the proposed policy and allow for public comment. A year later, several drafts of body camera policy are circulating inside City Hall, including from SPD and the civilian Community Police Commission. But there are serious gaps between the proposals, which commission co-chair Lisa Daugaard says they’re counting on the council to address.

Early on in the budget process, signs point toward a council that is partly sympathetic to the CPC’s concerns. Councilmember Lorena Gonzalez, a longtime devotee to the cause of police reform, made it clear she was hesitant to move forward with the program, largely because the department promised a yet-undelivered report on community outreach.

In a follow-up with Crosscut, she expanded.

“Council needs to see a clear operational policy that defines in which circumstances body cameras will be used, how recordings will be retained, and when members of the public should expect to have a reasonable expectation of privacy, amongst other issues,” she said in an email. “The Community Police Commission and impacted communities, particularly communities of color that are disproportionately impacted by the criminal justice system, must be at the table in the development of these body-worn camera policies.”

Perhaps more concerning is that Captain Joe Kessler of the department’s forensics section, which will be on the frontlines of handling body camera footage, was openly skeptical of his section’s ability to deal with body cameras. In a CPC meeting last month, he said, “I don’t know how we’re going to do it,” adding, “we can’t even hire the people to do it,” referring to handling the immense amount of footage that will pour in.

City Budget Officer Ben Noble promised Gonzalez that the community outreach report would be sent any minute. But the fact that neither community advocates, nor the cop in charge of forensics, feel Gonzalez’s questions have been answered could create a real barrier to SPD’s end-of-year goal for a rollout of the cameras.

Skepticism around body cameras is rooted in a sort of calculus: do the benefits of filming police interactions outweigh the concerns? Getting to “yes” is where the policy comes in. But in early drafts, “yes” is still distant for some.

For example, the camera footage would be subject to public disclosure law, a state-level issue. Daugaard notes this could apply to recorded statements from witnesses, victims or confidential informants. Many would like to see this question resolved in Olympia before cities like Seattle move forward. Just Tuesday evening, a group of civil rights activists from the ACLU, OneAmerica and others, sent a letter to the chairs of the state’s taskforce on body cameras explicitly demanding statewide legislation clarifying these questions before they recommend local municipalities move forward.

Nevertheless, Seattle appears to be full steam ahead. Understanding this, the CPC, which in the past has taken a similar view as expressed in Tuesday’s letter has worked to carve out what is, at least, an acceptable position.

One of Daugaard’s concerns, the SPD’s draft policy allows for the recording of witnesses and victims. The CPC, in their draft, wants to strike that and explicitly ban officers from recording any conversations with third parties. The threat of exposing informants or vulnerable victims is a problem egregious enough to counter-balance the benefits of body cameras.

Additionally, the department policy allows officers to review their footage without specifying when this can occur. The concern is that officers might watch the recording before filling out a police report to avoid getting caught in a lie or mistake.

The CPC draft revises this to say that officers may only view the footage after filling out a report. They may then write a second report after seeing the video, but must file both drafts.

The hairiest question focuses on which officers must wear a body camera and when. The spectrum runs anywhere from exempting large swaths of the department, to Police Chief Kathleen O’Toole going to meetings with the mayor, a body camera rolling.

The CPC revised this: “All sworn employees wearing a uniform must also operate a [body-worn video] system.” But that still leaves huge gaps. Take, for example, the controversial shooting of Che Taylor early this year. The officers who approached him were in plainclothes (although they were wearing vests). Should they wear body cameras?

“It’s pretty tough,” said Capt. Kessler. “On a vice, prostitution sting, where do I put my camera? We’re not going to be able to do those exceptions.”

The complexity of this question goes further. Officers are, in a way, always on duty. An officer on his way home after work could stop at a crash scene. An officer working a second job as a private security guard is beholden to the same standards as when they’re patrolling their beat.

“The department has to deal with the whole issue of secondary employment before we even tackle this,” said Kessler.

“I agree it’s a mess,” responded CPC executive director Fe Lopez. “But if SPD wants to roll out Body Worn Camera…every employee that’s working this way has to have it.”

The Seattle Police Department did not respond to many requests for clarification of its timeline.

When asked whether the mayor believed rolling the body cameras out by the end of the year was doable, spokesman Benton Strong answered, “I don’t think anything’s changed on that.”

Underlying all of this is a strange chicken and egg situation. The city doesn’t have any of its gear yet, and budget officer Noble doesn’t believe issues of how it will operate can be fully answered until it arrives.

In some ways, then, the mayor's office is asking for a certain amount of faith that policies can be tweaked as the new cameras are introduced. Over the next several months of budget season, the council will demonstrate how much faith they’re actually willing to provide.