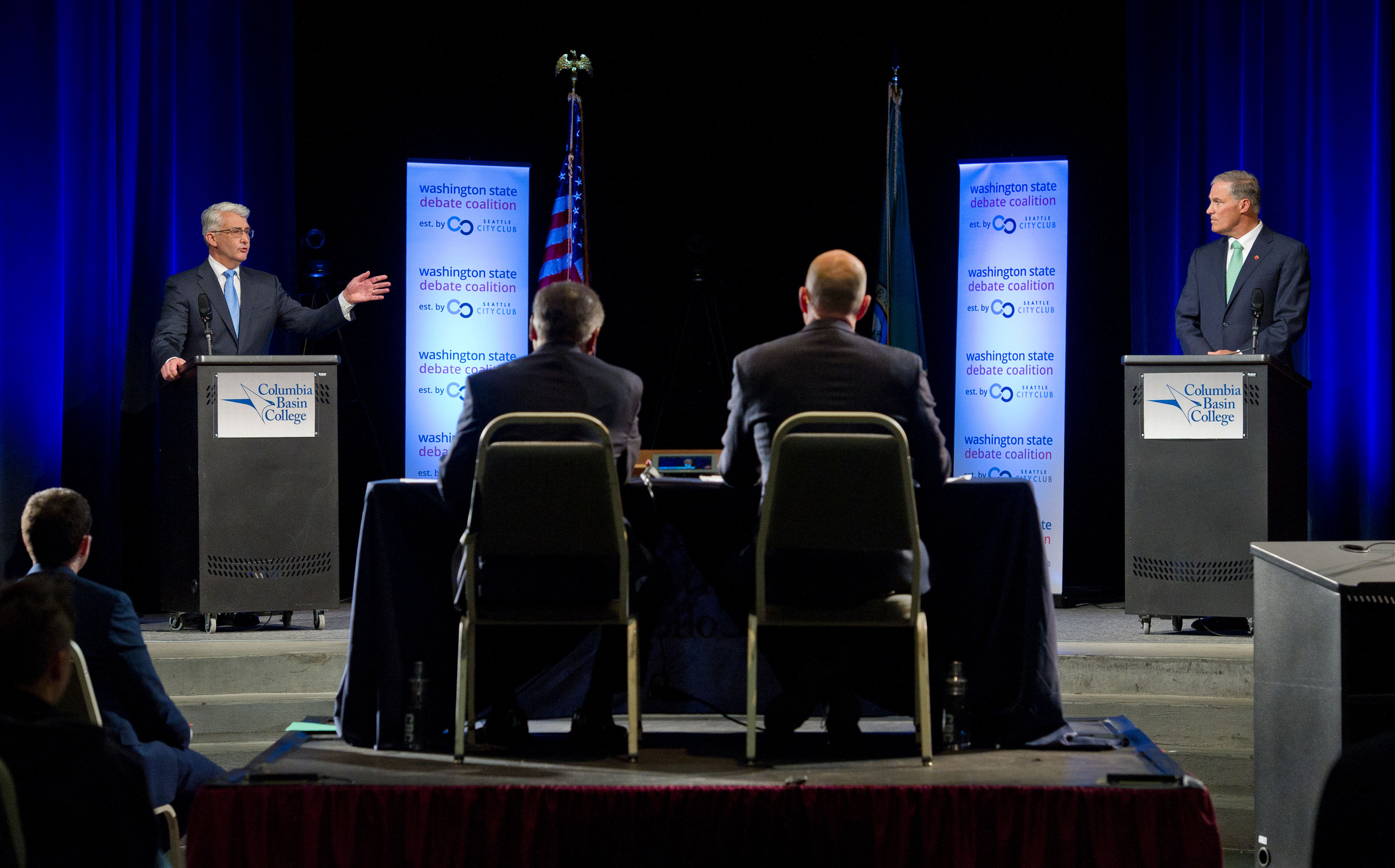 Interviews with state candidates usually follow a predictable track: Policy is talked. Records are defended. Experience is pointed at, and explained to be the perfect preparation for what is sure to be one of the most difficult legislative sessions in recent memory.

They can also have their surreal moments — and conversations with Democratic Gov. Jay Inslee and his Republican challenger Bill Bryant last week were no exception.

Bryant, a Republican and former Seattle port commissioner who runs an export business working with farmers around the state, reiterated a few positions: He’s in favor of protections for LGBT workers; transgender bathroom access rights; and police reform, but also believes that “all lives matter.” A fiscal conservative, he summarily discards an idea that may be a prominent Democratic funding proposal this year — a capital gains tax. Perhaps most dramatically, he’s said he would if elected temporarily freeze rulemaking at state agencies until his staff could go through existing rules one-by-one, and also now promises a wide-ranging police and prisons reform bill by 2019.

Inslee, the congressman-turned-governor who succeeded Christine Gregoire, lays claim to wresting a significant transportation budget from the hands of Republicans in 2015; expanding funding for both pre-school and higher education; and driving ambitious environmental discussions into the spotlight, along with passing the DREAM act for immigrant students. In the face of a tough year ahead, he’s also promised to release a balanced budget proposal in December and continue with his bipartisan efforts on improving the funding for schools.

Yet, conversations with both also took surprising turns.

Bryant’s turn came when, in response to a question about the crisis generated by the state Supreme Court’s 2012 McCleary decision, he said repeatedly, “It’s not a funding crisis.”

To clarify, McCleary specified that the state government is failing its constitutional obligation to pay for the full cost of a basic education for every Washington student. Even conservative estimates put the cost at roughly $1.5 billion per year, and almost five years later the Legislature still hasn’t come up with most of the money — even though the court has been fining them $100,000 per day for their inaction. In other words, McCleary is very much a funding crisis.

Inslee’s moment came when, asked about his most recent year in office and the dramatic mass-veto move he used to bring the legislative session to a conclusion, he said: “Everything turned out fine.”

To clarify, everything turned out fine in the sense that the Legislature did not actually burn down. The unofficial catch-phrase of the session was “kick the can down the road,” uttered in one press conference after another as lawmakers described plans to put off a McCleary fix until 2017. The budget that legislators finally passed contained major concessions on both teacher pay and hiring and funding for homeless-assistance. Perhaps most troublingly, it balanced the books by actually removing future funds from schools, cancelling $91 million set aside for the so-called “levy lid-lift” and raising the specter of mass teacher layoffs in spring 2017 if lawmakers aren’t able to get the broader McCleary fix done before then. In other words, last year did not turn out fine.

Inslee, of course, right away elaborated on his statement.

“Obviously, with a capital ‘O,’ everything isn’t hunky dory,” he said. “We obviously have much more work to do. …. What I mean by that is we finally did get a budget that made substantial progress.”

Bryant likewise elaborated, acknowledging that McCleary requires, but adding that he sees equity between school districts as a broader challenge than just funding. “It’s an equity crisis,” he said.

So, while neither comment is without depth, both are also revealing, perhaps more than the candidates realize.

For Inslee, the remark points to a tendency to insist that the legislative sessions making up his first term were nothing but successful. Occasionally, this tests the bounds of credulity.

Asked if he had any specific ideas for easing partisan tensions, which some Democratic legislators predict will worsen in the coming year, Inslee objected to the premise of the question.

“We have made incredible progress in the last four years,” Inslee said. “I just don’t know how one can laugh or sneer at or belittle the efforts we’ve made.”

For context, while both parties have had successes in recent years, in 2015 no less of a staid, highly respected outlet than Governing Magazine placed Washington among the legislatures most paralyzed by partisan gridlock. That report followed a 2013 study that named Washington’s the third most-polarized state capital in the nation.

It would be wrong to minimize Inslee’s successes, not least of all his passage of the DREAM act, which expanded college opportunities for immigrant students, and real achievements on teacher funding and class sizes — all of which he pointed to in speaking with Crosscut. Still, the vision of lawmakers in Olympia last year happily cooperating — to say nothing of the year ahead — is a rhetorical stretch, one that elides the failure, until very recently, of the state government as a whole to make substantive progress on McCleary itself.

It also leaves open the original question about fostering bipartisanship. Inslee went on to cite the Education Funding Task Force, the bipartisan group called together last winter by legislation he sponsored, which has by all accounts spent the year making solid progress toward putting an exact price on a McCleary fix. But beyond that, Inslee cited no specific plans or initiatives to build bipartisanship, instead saying that he would continue to work as he has in the past.

“All I know is I wake up in the morning and try and get people to work together,” Inslee said. “And I have had substantial success in that.”

Bryant’s own paradoxical remark – “it’s not a funding crisis” – is also illustrative.

Fundamentally, Bryant pitches himself as having three basic strengths: an ability as an outsider to bring Democrats and Republicans together; social and environmental views straddling the blue-red divide; and a conservative fiscal philosophy.

But his apparent willingness to embrace the paradoxical also repeated itself in his response to questions about that campaign pitch, especially his claim to be an outsider without deep ties to either party, who would thus be able to credibly bargain with both.

Early in his remarks, Bryant said that he would discard the idea of a capital gains tax, floated as a way to pay for part of McCleary while shifting tax burdens in the state toward wealthier residents. Many Democrats, including Inslee, have supported the idea.

But later, asked whether there were issues on which he would be prepared to ask his own party to compromise in the same way — Republicans’ proposals he would be willing to ask them to discard, the same way he discarded the Democrats’ idea of a capital gains tax — Bryant hedged. When pressed, he said that he thought that by starting negotiations earlier, he could avoid asking his own party to compromise on significant issues.

Bryant was more specific about how exactly his regulatory freeze would work — revealing a proposal that essentially hangs the shape of the state’s administrative rules on his judgment. One or more executive orders would freeze rulemaking at all state agencies soon after his swearing-in, Bryant said, and his staff would work with each agency to perform an initial review, forwarding any questionable ones to him. He would enlist agency heads and the heads of relevant legislative committees to weigh in, he said, but the final call on any given rule would always be his.

That could include prominent changes made in recent years, ranging from the Department of Ecology’s Inslee-ordered carbon cap rule to 2014’s controversial bathroom rights ruling from the Human Rights Commission. The former refers to a cap on carbon emissions which the governor ordered the DOE to adopt, and which begins to kick in next year. The latter involves a rule affirming the right of transgender Washingtonians to use bathrooms matching their gender identities. Both would be up for review, and while Bryant was positive about bathroom rights, a representative later confirmed Bryant is skeptical of the carbon cap.

Asked if such a review process wouldn’t interfere with his own plans to intervene in the controversies over both oil trains and homelessness in the state, Bryant acknowledged it might delay both. But he said he would expect such a review to last no longer than early summer, at the latest.

Bryant isn’t without accomplishments of his own; at the port, he was involved in the negotiations that brought about joint operations with the Port of Tacoma, something that had long been discussed without concrete action as a way to help the region’s economy in the face of growing competition from ports in Canada and China. And he talks smartly of bringing a moderate, pragmatic approach to the state.

But his unwillingness to name even a single issue on which he would be prepared to ask his own party to compromise – while talking openly of giving a preemptive axe to two significant Democratic proposals – raises the question of whether he isn’t playing down his own conservatism to win over centrist suburban voters.

In any case, voters may have already made up their minds: An Elway poll released Monday put Bryant 12 percentage points behind Inslee, a likely insurmountable gap so late in the race.

It’s hard not to wonder if Trump isn’t doing to Bryant the same thing that gay marriage did to another moderate Republican running for governor: Rob McKenna. In 2012, McKenna lost his own gubernatorial race after refusing to endorse the initiative for gay marriage. Many wondered at the time whether that stance hadn’t alienated swing voters from the otherwise moderate Republican.

This election, the state Republican Party has chosen to double down on Trump, despite his declining reputation among even moderate Republicans. In just one example, state party chair Susan Hutchison told a television audience in June that she thought Trump’s comments on torture, a registry of Muslims and targeting non-combatants were nothing more than hyperbole, and didn’t dim her support. Perhaps in deference to the party line, Bryant hedged for months before finally saying in August that he wouldn’t support the Republican presidential candidate. While Bryant backed away from Trump himself, the Trump effect may be drowning out the specifics of what the candidates for governor are saying.