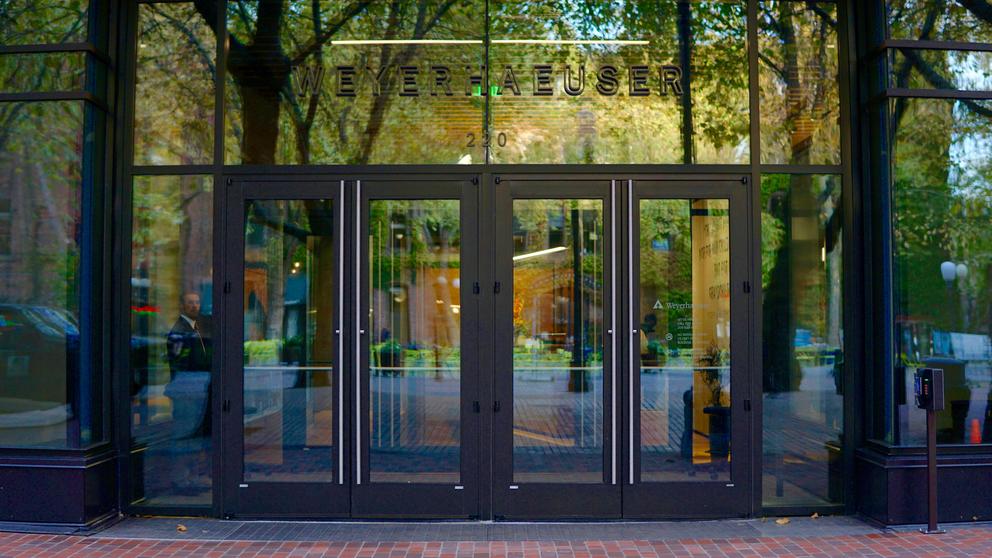 Glass at the main entrance of the new Weyerhaeuser headquarters reflects trees in the adjacent Occidental Square Park.

Pioneer Square has seen an influx of new people this fall, as 800 Weyerhaeuser employees move into the company's sparkling new headquarters. Almost immediately, the impact was felt in restaurants and coffee bars. Lining up at my usual spot, Umbria, I was surrounded by a sudden influx of boisterous workers who were frequently keyed up like kids on the first day of school.

The arrival of this company from its former, highly iconic building set in what was the pastoral suburbia of Federal Way is a bellwether of larger urban change. In sharp contrast to just a few decades ago, many businesses now prefer to situate themselves in dense, inner-city locations. Amazon chose to locate in the center of Seattle several years ago. More recently Expedia has followed suit. On the opposite coast, the relocation of GE from its bucolic site in Fairfield, Connecticut to downtown Boston is yet another example of this shift.

Weyerhaeuser could have chosen many sites throughout the metropolitan area, even simply leasing upper floors in an office tower. It might have even received naming rights. Instead, it picked the what might have been considered the worst block in the entire downtown.

It could have also built another iconic building — a high profile corporate calling card that would announce its presence with a one-of-a-kind architectural expression. Some headquarters symbolize their ambitions with a hubris displayed in oh, say, quirky glass domes. Instead, Weyerhaeuser chose to house itself in a building with a more modest form.

The Weyerhaeuser building is a study in subtle elegance and deference to its urban surroundings, underlining the company’s commitment to the city.

Deftly designed, the building displays a level of craft rarely found in contemporary commercial buildings. Urban Visions, the developer, commissioned Mithun architects to design the building, the basics of which were in place when I toured it before Weyerhaeuser’s people showed up. But the building has acquired a degree of refinement both inside and out. The results are simple but powerful.

Filling the entire length of the property, the building at long last provides a fourth wall to Occidental Square. The effect this change has had on the public square is astonishing. It is now a complete “outdoor room,” framed on all sides with shops and cafes. The square used to bleed out into what was a forlorn and lumpy parking lot where the Weyerhaeuser building now stands. Now it’s firmly bounded by a diaphanous wall of glass on the building’s west side.

The glass wall creates a reflective backdrop for the mature London Plane trees that were planted in the 1970s when the city of Seattle built Occidental Square park. Occidental Square now looks doubly lush with its great ceiling of splayed-out branches. The recent installation of a chandelier-like art piece, suspended from the trees, adds to the feeling of a room. The presence of the glass wall has, however, made the space a tad darker; selective pruning of the trees — admittedly, that could be controversial since the felling of some trees early in the century to create more light provoked a small uproar — would bring more sunlight back to the bricked floor of the space.

The storefronts have yet to be occupied, but Greg Smith of Urban Visions is bringing in restaurants and a coffee house. He is pleased with a novel element that makes so much sense here in the Pacific Northwest, it is astonishing that no one else has done it yet — sliding overhead canopies.

In good weather, outdoor seating will be open to the sky and trees above. During rainy weather, panels will extend out along steel struts, forming a horizontal umbrella.

The restaurants that will open over the next year will take advantage of a change in state regulations regarding the serving of liquor outside. No longer will awkward fences be required, confining patrons to a handful of tables in what amounts to a low pen. Smith is working with Seattle to lay out an array of tables and chairs in the fashion seen in other countries — multiple rows that contribute to a social space. This change has been a long time coming. Both Oregon and Idaho have long allowed tables and chairs to spill out onto the sidewalk with a much more convivial atmosphere.

An overhang of the building subtly carries the cornice line of the older buildings across the street to the south. Although the Weyerhaeuser building is starkly contemporary, it respects this classic way of marking the lower floor of a commercial structure. The masonry end walls along Main and Washington streets make this subtle reference as well. Solid, but pierced by generous windows that reveal the depth of the wall, they anchor the building firmly to the street.

The brick face was laid up by hand – a rare construction method. In contemporary use of brick, prefabricated paneling seems to be the norm. Here, one can see the slight imperfections in the hands of the masons as each brick was individually mortared in place. The metalwork on the columns is also well-crafted, with careful rivets that convey a tailored urbanity.

The facade along Main Street visually extends the brick-and-metal wall around the small Waterfall Park, on the corner of Main and Second Avenue S., on the opposite side of the Weyerhaeuser building from Occidental Square. And the rear wall on the alley presents a solid vertical backdrop for the waterfall inside the park — an aspect that did not exist before.

The new Weyerhaeuser headquarters is not a freestanding landmark like the former building in Federal Way. But the era of the isolated campus might well be coming to an end.

The new headquarters fits thoughtfully within its setting, respects the history of its neighbors, and enlivens the streetscape while doing so. It’s a building that is refined, gimmick-free, and solid. Kudos to a building that adds a new layer of contemporary craft and elegance to an existing, architecturally rich setting.

As corporate buildings go, this one is both remarkable in its design and well-mannered in its comportment. It makes for a good new neighbor in Seattle’s oldest urban district.

Earlier coverage: “The death of the suburban corporate campus.” 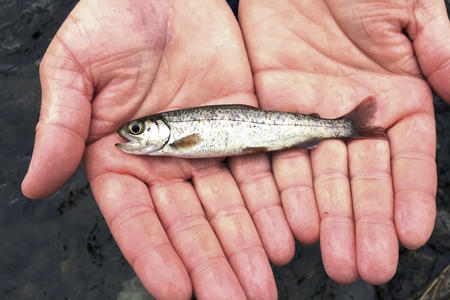