Local politicians call for resistance. They get it 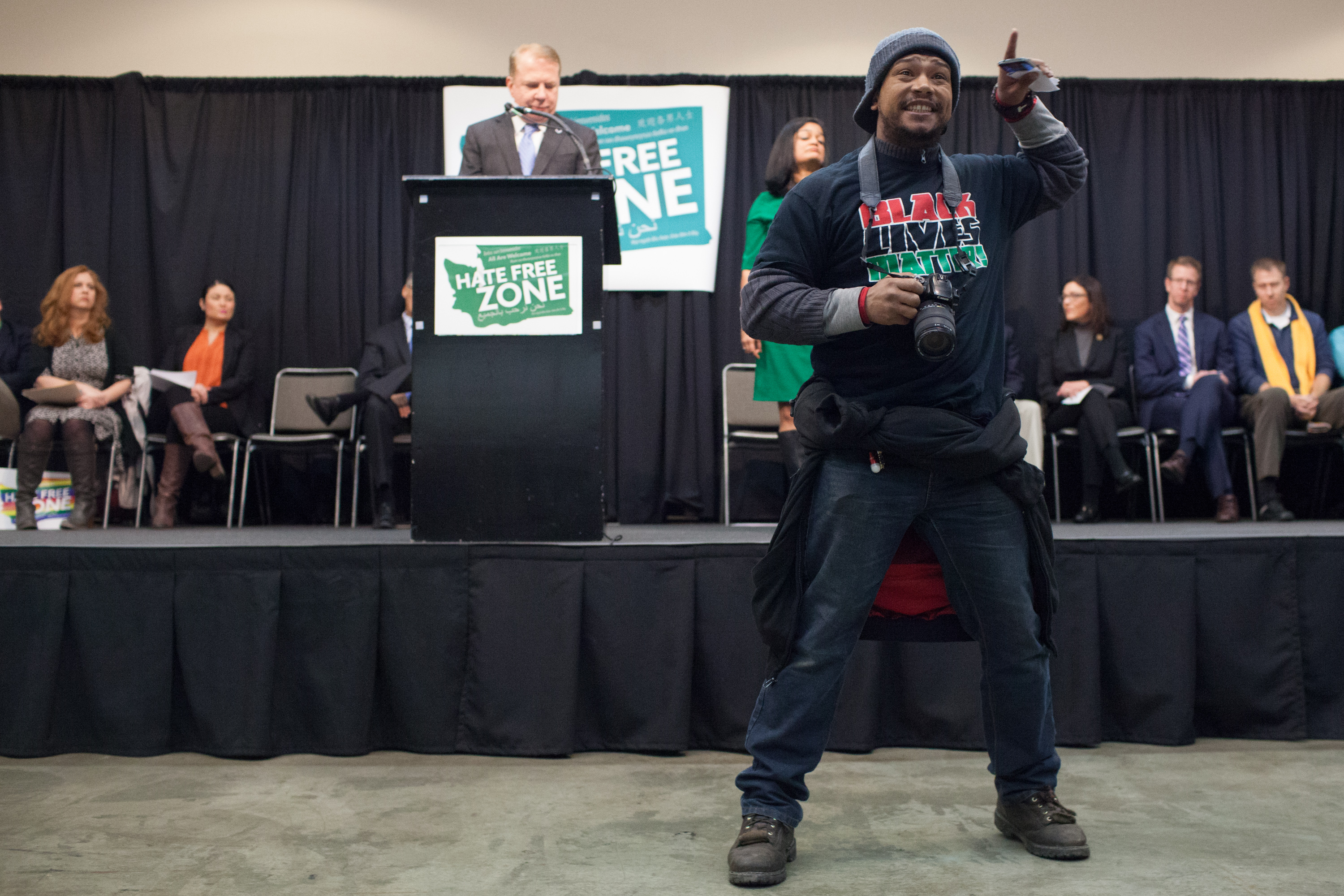 “Resist!” cried Rep. Adam Smith, at a Monday event declaring Washington as a “Hate Free Zone,” featuring many of the region’s most prominent politicians. Although he probably meant Donald Trump, his battle cry was rewarded moments later as about 30 protestors shouted down King County Executive Dow Constantine and Seattle Mayor Ed Murray.

The event Monday was meant to be a show of unity, as hate crimes have reportedly surged nationwide since the November election. While initial accounts show no such spikes locally, the sign for a Redmond mosque was vandalized last weekend for the second time this month and the local chapter of the Council on Islamic American Relations have been hyper-vigilant in the face of emboldened Islamophobic rhetoric.

Seattle and the region have had many such events since Donald Trump became president-elect, although Monday’s carried the most political clout. Following the lead of Rep.-elect Pramila Jayapal — who launched her own public life with just such an event, in the same cavernous Seattle Center building, after 9/11 — were Smith, Constantine, Murray, Gov. Jay Inslee, Seattle City Councilmember Lisa Herbold and Lorena Gonzalez and a vast slate of faith leaders.

Until Monday, many of these gatherings have sounded more like vigils than rallies, replete with a grasping and vague optimism that is more often found at a funeral than anywhere else. But at each was a sense of catharsis as local leaders promised to fight and represent the region’s values well.

But Monday’s event will not fall into this cathartic bin. It will instead by grouped with the Bernie Sanders rally from last year, when several Black Lives Matter protestors took the stage away from Sen. Sanders, then a candidate for president. Like the Sanders rally, the assumption from attendees and elected officials beforehand was, we’re on the same page.

But in reality, as speakers turned the spotlight toward Washington D.C. or the more conservative parts of the country, the protestors cranked that light back home, toward an issue that’s been festering for years: The proposed new youth detention facility.

The room was full, with many people standing in the back. Jayapal opened the event and played, as advertised, the anti-Trump role. Unlike the nuclear meltdown that is a Donald Trump speech, when Jayapal speaks, she seems to relieve pressure in controlled spurts through a valve; the crowd has the sense she could let loose in a fantastic way, but are left to guess what that might look like.

She was specific on the sorts of intolerance she was against, pointing to the Redmond mosque and namechecking the re-emergence of Kris Kobach, the architect of the National Security Entry-Exit Registration System (NSEERS), which tracked people coming and going from predominantly Muslim countries.

But she also spoke in broad strokes of standing together, and supporting the oft-marginalized communities of Seattle. It was a theme shared by those who followed her, including Inslee and Smith.

When Constantine took the stage, though, he was quickly cut short. Protesters shouted over his planned speech, calling on him to cancel permits on the $210 million Youth and Family Justice Center, approved by voters in 2012.

“This felt like it was the last culmination of politicians before the holidays,” said Meron Tiezazu, one of the protestors. Many of the protestors were clear that they supported the message of a hate-free Washington, but, like Tiezazu, wanted to take advantage of having every public official in one place.

Constantine false-started several times before realizing his speech would not be allowed to continue. He ceded the microphone to the next speaker and offered to meet with the protestors outside. There, they had a tense conversation that ultimately resulted in Constantine promising to meet after the New Year, looking to the editor of the South Seattle Emerald to help set it up.

Speaking with Crosscut later, she pointed to “the irony of coming to celebrate having a hate-free community when this is a major issue that is absolutely perpetuating hate in our most marginalized families.”

When asked if Constantine seemed to hear the message, she said, “It looks like he’s making an effort, but I don’t have a reason to trust that. I’d love to, but he’s not giving us a reason. The darkest reaction is he’s up for reelection and he made kind of a show of coming out to meet with people and people got to see that and made him seem caring. I don’t think he had any other choice in the matter.”

Constantine, for his part, spearheaded the 2015 Best Starts for Kids levy, funding that will go toward early intervention for children that are vulnerable to ending up in the justice system. Speaking to Crosscut, he pointed to progress made.

But when it comes to the new facility, he said, “We get to this point where there’s an irresolvable disagreement and that is the question of whether you can do away with any detention for people under the age of 18. [The current facility] is a lousy place.”

Mayor Murray was also cut short by protesters for the same reasons. Unlike Constantine, however, he tried to plow through his speech, to minimal success. He did not stick around for conversation.

When Sen. Sanders was interrupted last year, Seattle exploded into a debate about who has the right to protest, when, where and about what. The miffed supporters of Sanders asked, “Why here and now? We’re with you.”

As Murray struggled to deliver his speech, he hammered on this sentiment too. “You know what I’m worried about folks?” he said. “We are mostly on the same side. And if we cannot come together, we cannot change this nation.”

When asked about this, Tiezazu said, “If (the protest) makes you uncomfortable, that might be a good thing…. For us to come here in a space like this, that is touting the fact it’s a hate free zone and Jay Inslee accepts all these people…the declaration does not mean anything unless the foundation is laid for that to actually occur.”