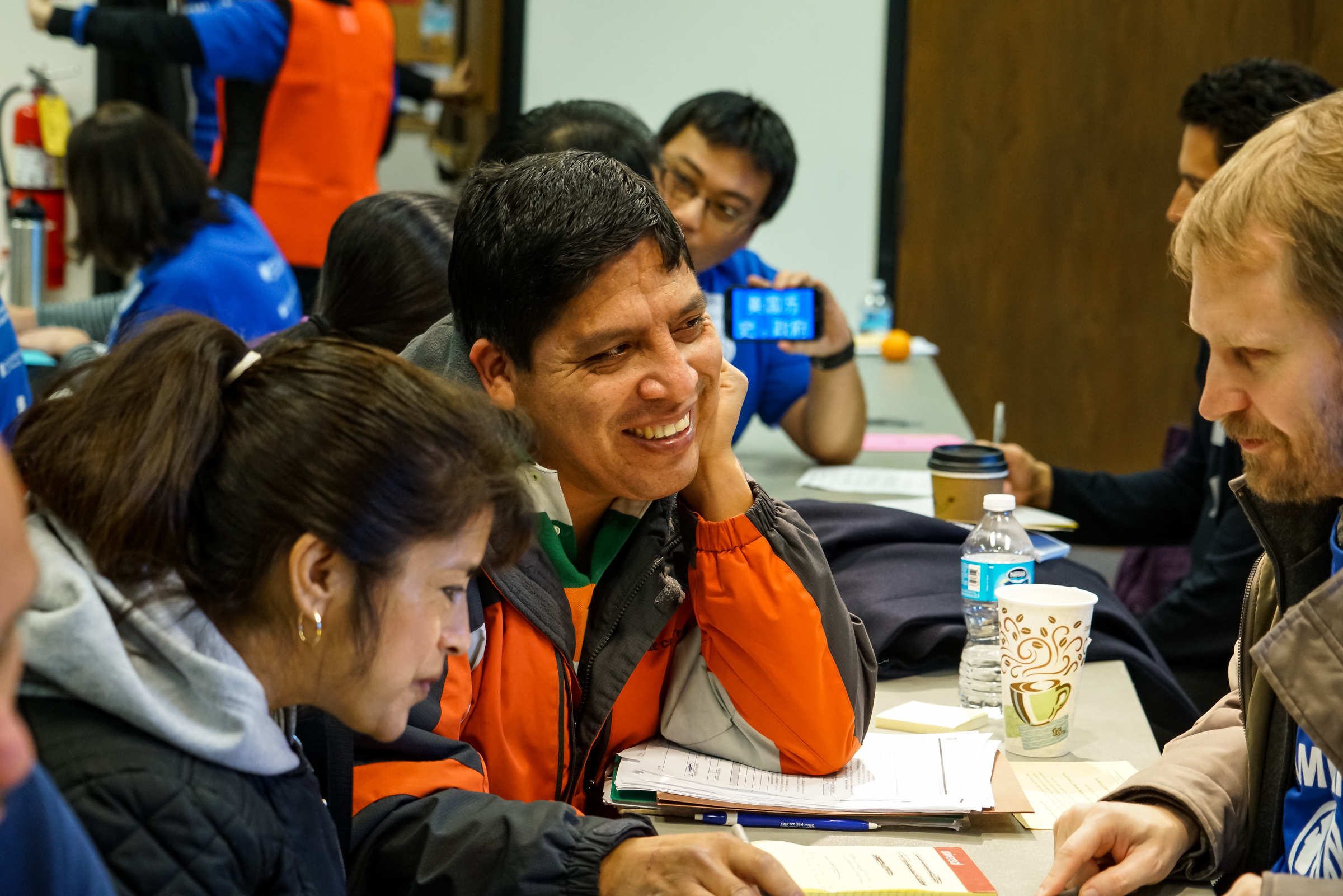 A family at the Screening Station talks with a volunteer about any potential red flags regarding their citizenship application.

Early on a December Sunday, hundreds of aspiring U.S. citizens filled a common room at North Seattle College. Some had left their homes in different counties before daylight to line up for this secular Sunday ritual: the chance to complete their citizenship applications — a daunting process that usually takes months — in one day with the help of a small army of volunteers.

The Seattle Office of Immigrant and Refugee Affairs (OIRA) held the first of these “citizenship workshops” in October. Three hundred and twenty aspiring citizens turned out for the second round on Dec. 4, up more than 70 percent from the first. Volunteer turnout more than doubled, from 250 in October to about 600 in December.

OIRA and its partners have a one-word explanation for the increased turnout: Trump. The president-elect’s signature campaign promise was to kick out and keep out as many immigrants as possible.

“Right after the election, boy, we got a lot of calls,” said Joomi Kim, Executive Director at the Korean Community Service Center in Edmonds, one of OIRA’s partners. “[Legal residents] want to get citizenship as soon as they can. They’re nervous.”

Paula*, a legal permanent resident of the United States born in the Philippines, heard about the December workshop at the last minute from a friend. She always planned to apply for citizenship, but kept putting it off because she never felt she had the time to devote to the process.

She’s not alone: To be eligible for citizenship, you must be a legal permanent resident, or green-card holder, for at least five years (three if you’re married to a U.S. citizen). But nationally, those who naturalize spend a median of seven years in legal permanent resident status. I talked to several people at the December workshop who’d been in the U.S. for over 20 years without pursuing citizenship.

Immigrant advocates cite income as one of the biggest barriers: It now costs $725 just to file the N-400 naturalization form. The form doubled in length in 2014 to 24 pages (with questions like “Have you ever been a habitual drunkard?”), making legal assistance pretty much a necessity for filling it out. With local immigration attorneys charging up to $3,000 per form for their aid, the price tag quickly becomes prohibitive.

OIRA works to help applicants overcome these challenges of time and money by connecting them with community-based organizations like Colectiva Legal del Pueblo, Asian Counseling and Referral Service and Horn of Africa Services that offer free or low-cost legal assistance. But as with so many services provided by nonprofits, the need is much greater than the capacity of any individual organization, and hopeful citizens often end up on long waiting lists.

And so the citizen workshops were born: By concentrating resources, recruiting hundreds of volunteers, and doing aggressive outreach to immigrant communities, the workshops can help hundreds of people complete their N-400s in one day without paying any legal fees.

“It’s like one-stop shopping,” Paula said. “They made it so easy for you; they even gave you an envelope with a [mailing] label.” Paula found out about the workshop too late to preregister, but she showed up as a walk-in and left with her N-400 complete except for one section she needed to finish at home.

Between 180,000 and 210,000 eligible-to-naturalize green-card holders live in Washington state, two-thirds of them in King County. As the national conversation around immigration continues to fixate on the estimated 11 or 12 million undocumented immigrants living in the U.S., OIRA sees the less-sensational slog of converting green-card holders to citizens as a natural way to empower foreign-born residents who have chosen Washington as their home. .

“We have thousands of legal permanent residents who live in this city, but don’t have an effective voice in government,” said Seattle City Councilmember Lorena González, a daughter of undocumented migrants who chairs the Gender Equity, Safe Communities & New Americans committee. “Democracy is at its best when it’s representative of people who live in the community.”

Before her election to City Council, González worked for immigrant-advocacy group OneAmerica, and was part of the coalition that pushed the city to create OIRA in 2012. The office was only the second or third of its kind in the country, according to González, although other large cities have since followed suit.

Trump’s win kicked the city’s work into high gear. “A lot of people were saying they really want to [become citizens] now,” said Christina Guros, OIRA’s Citizenship Program and Policy Specialist. “It’s a mixture of fear, and a desire to be part of the civic process.”

“The election of Donald Trump lit a fire under us to claim our rights as citizens in a very uncertain future,” Paula said. “The desire [to become a citizen] was always there, but fear is a great motivator … [The election] told me I have to stop monkeying around and really focus on this. I think that’s true for a lot of people.”

The day after the election, Mayor Ed Murray assured residents that Seattle would remain a “sanctuary city,” despite Trump’s threat to pull federal funding from cities that do not enforce national immigration law. As OIRA amplified this message of safety and support, it could offer the December workshop as a concrete example of the city’s commitment.

“We are ready to do whatever we can to help folks,” said Nhi Tran, OIRA’s New Citizen Program Specialist. “We feel that right now is the time to let people know where the city stands and that we’re here to help.”

I talked to volunteers at the December workshop who said that being part of the event felt like a active form of resistance to the messages coming out of Trump Tower. “The workshops were a very productive outlet for the fear and concern people had over what would happen to our immigrant and refugee neighbors,” said OIRA Director Cuc Vu.

González helped secure an additional $300,000 in the city budget over the next two years to hold citizenship workshops on a regular basis. OIRA’s next event falls on none other than January 20, Inauguration Day. The office hopes to serve up to 1,000 people, offering assistance with citizenship as well as “know your rights” trainings and legal advice for all immigrants, regardless of status.

Volunteer registration for the event, held at McCaw Hall, is now open. Vu said they chose that venue for its symbolism as a site where Seattleites go to experience beautiful works of art. “How fitting to use that place to welcome people,” she said. “We invite everyone who believes in these values and this vision to be a part of it.”

* Paula asked that we not use her real name out of privacy concerns and because her application for citizenship is still being processed. 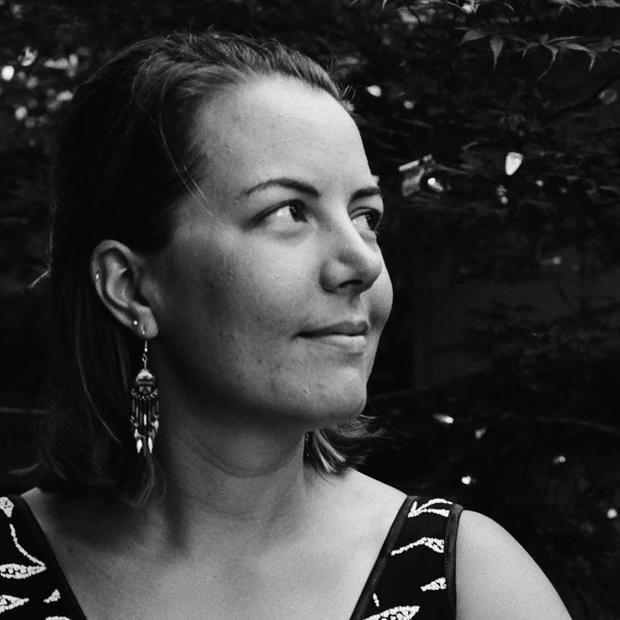 Claire Thompson is a freelance writer, trail worker and Seattle native who used to write for Grist. She spends summers living out of her tent and avoids shopping on Amazon.