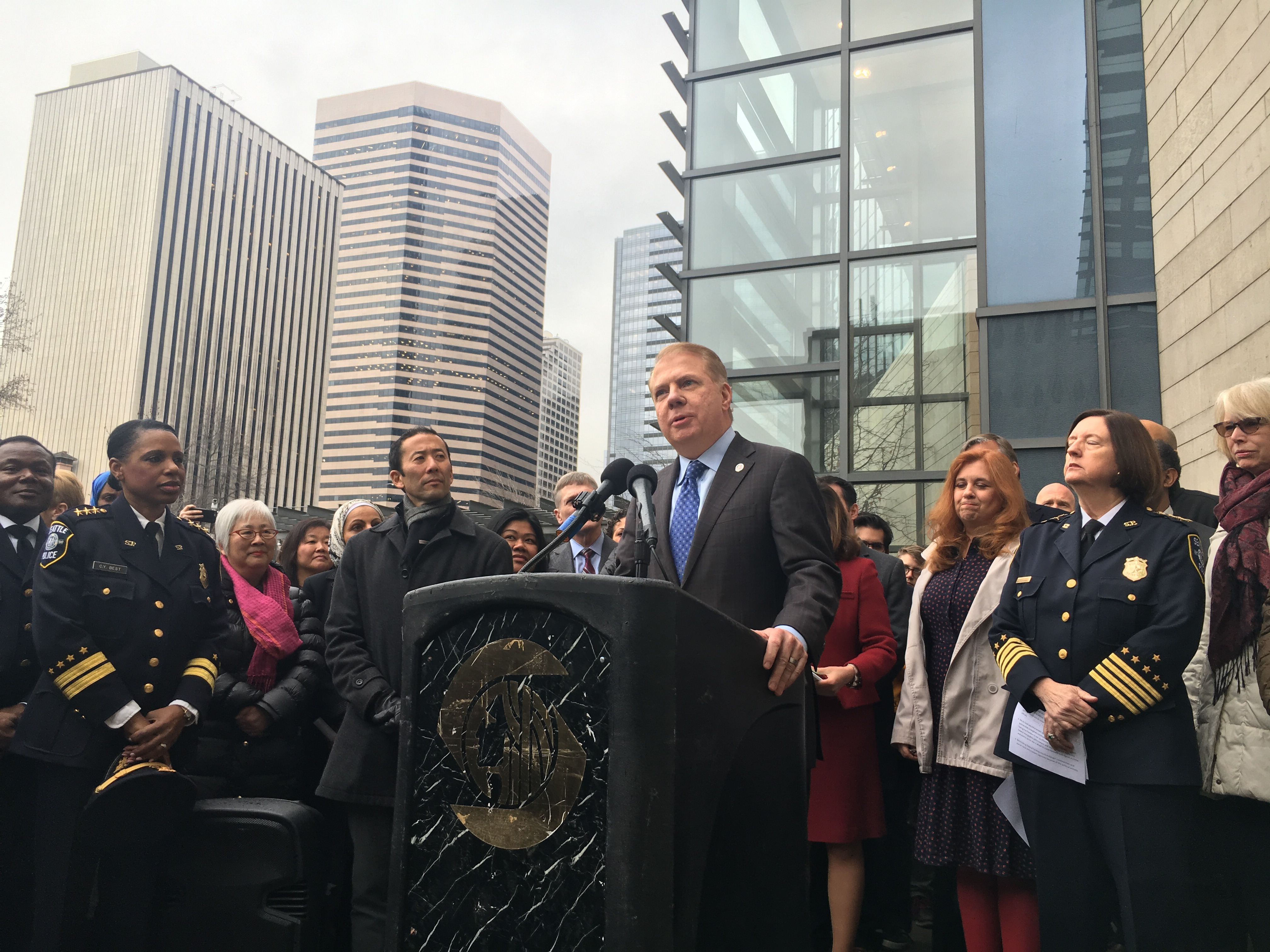 The City of Seattle will sue the Trump administration.

Seattle officials have known this day was coming since they woke up on November 9; Trump had long threatened to pull federal funding from cities that refused to aid federal authorities in tracking down undocumented workers. His executive order Wednesday is light on details, but it commits his administration to begin the process of considering what would get cut and from where.

Any hope that Trump the president would differ somehow from Trump the candidate is quickly disappearing.

Seattle is a prime target: Murray was among the first mayors in the country to defy Trump’s threats, announcing that city officials would not ask immigration status and would not help federal authorities. And while neither Trump nor anyone in his administration has said how or where these cuts would unfold, Murray is already preparing.

Speaking at a press conference Wednesday on the steps of Seattle City Hall, Murray said he would instruct his departments to “reprioritize” their budgets in preparation for federal cuts. Each department will receive a number to shave from its budget.

Murray could not be more specific on how those numbers would be determined — whether there would be across the board reductions or whether some departments would be asked to trim more than others — saying he had not actually met with the department heads yet. But at stake, he said, is roughly $75 million of the city’s $5 billion budget. (Murray spokesperson Benton Strong said afterward the number is actually $85 million.)

By numbers alone, the Department of Human Services relies the most heavily on federal funding, at about $30 million, said Strong. DHS oversees services for youth, the elderly and the homeless, among others. But Murray and his aides expressed relative confidence that Trump would only be able to cut what is actually tied to immigration.

Within that context, the Seattle Police Department is the most at risk. Murray said the department receives roughly $10 million a year from the federal government, and because Murray has explicitly instructed police chief Kathleen O’Toole to not aid federal law enforcement authorities on immigration enforcement, all of that is theoretically at risk. That pot of money includes programs to fight human trafficking, internet crimes against children and a $600,000 grant to fund body cameras.

Still, it would be worth the hit, Murray said, referencing Japanese internment during World War II. “This city has been here before and we’re not going back.”

When asked how much federal funding he was willing to lose, Murray said "every single penny," to great applause from the crowd behind him. As to how the city would fill that void, Murray suggested more local tax levies to pay for things like homeless services.

Councilmember Lorena Gonzalez also gave a stirring address. She’s a daughter of Mexican immigrants and grew up working in the Yakima Valley from a young age. Choking up at times, she announced she would introduce a resolution reaffirming Seattle as a “welcoming city.”

“Executive orders [from the President] are being sold to people as necessary to public safety,” she said. “But let me be clear, these orders do not keep us safe. Today’s executive orders represent prejudice and will only serve to foster suspicion amongst our neighbors reminiscent only of what we saw in the Cold War and World War II.”

Even as they prepared austerity measures, Seattle officials expressed confidence that they would weather this storm. “This city will not be bullied by this administration into abandoning our core values," Murray said, "and we believe we have the rule of law and the courts on our side.”

Mayor Murray talked last week about the issue with Enrique Cerna of KCTS 9.

Mayor Ed Murray on Seattle as a sanctuary city from Crosscut on Vimeo.