The speech that led to the bloodshed at UW 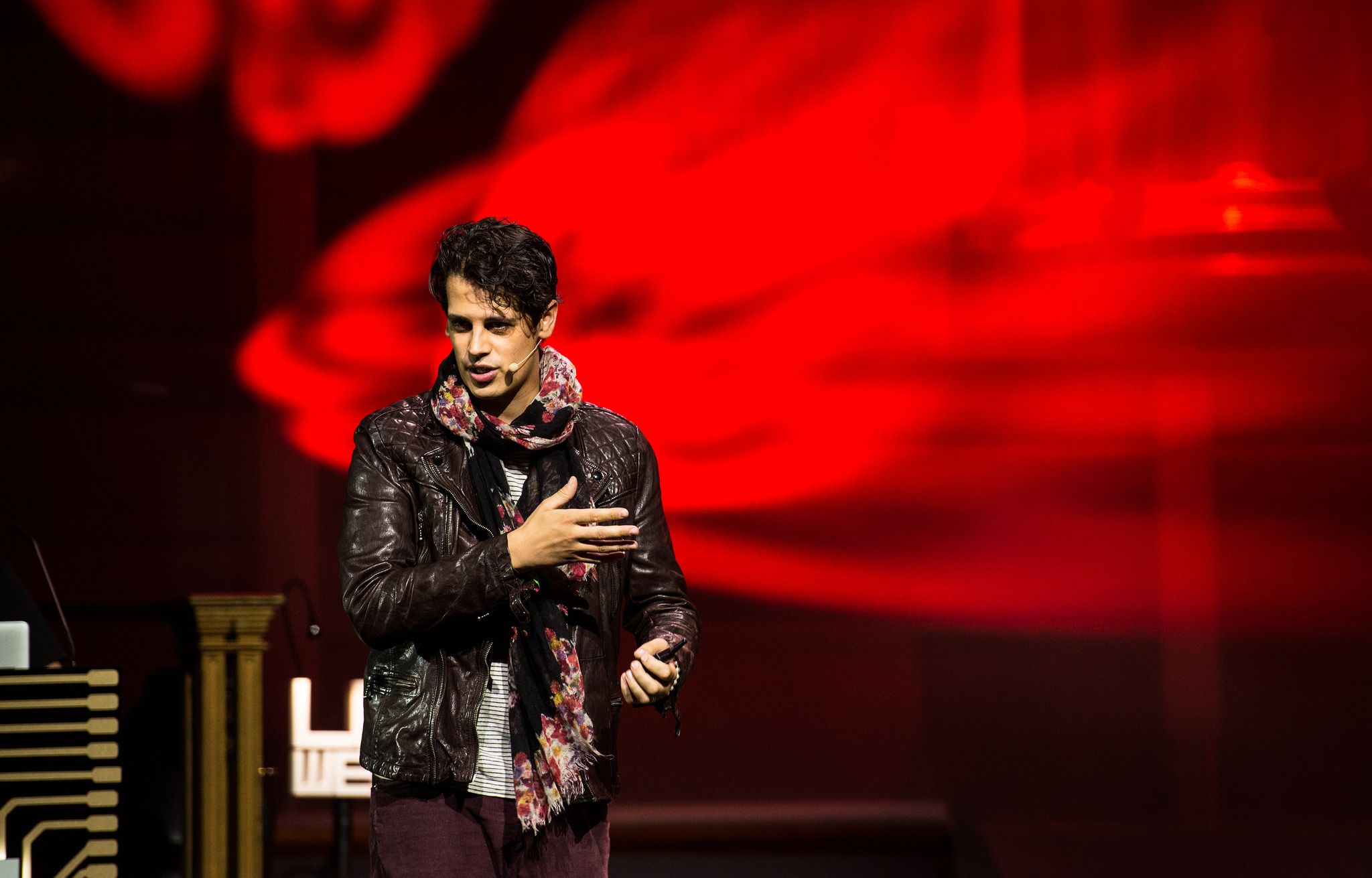 Milo Yiannopoulos at a 2013 event in London.

As provocative Breitbart editor Milo Yiannopoulos entertained a crowd in a University of Washington lecture hall Friday night, protesters and supporters clashed outside. In the melee, a man suffered a gunshot wound to the abdomen. But while the news of the shooting quickly engulfed Seattle, the media paid little attention to Yiannopoulous’ speech itself or the motivation behind the UW College Republicans’ controversial invitation.

A week before Yiannopoulos’s event, Jessie Gamble, the president of the College Republicans at the UW, talked about why the club chose to invite a self-professed internet troll to speak on campus. Yiannopolous, who is notorious for his misogynistic and racist comments and his association with radical, right-wing politics, was banned from Twitter in 2016 after harassing African-American actress Leslie Jones. His speeches are often peppered with racial slurs and abuse, and he peddles anti-gay rhetoric despite being openly gay himself.

“Well, we really liked his notion of safe speech culture,” said Gamble, explaining that she had found that many right-leaning students felt that they were discouraged from discussing their views at the university. “And Milo was free.”

She said that despite attempts from students and community members to stop it, the event was sold out to three times capacity, and she expressed confidence that the event would remain peaceful.

Gamble appeared sensitive to others' concerns about Yiannopoulos and stressed that UW Republicans' views aren't hateful. She said she believes that people, especially those in marginalized groups, were valid in their anger about some of Yiannopoulos’ messages.

Yiannopoulos’ past targets have included transgender students (he verbally harassed one during a speech at University of Wisconsin-Milwauke), women (“Birth control makes women unattractive and crazy"), and Muslims (he once penned a speech titled "10 Things Milo Hates About Islam").

While some universities canceled Yiannopoulos’ appearances due to safety concerns, she said, “I should hope that no one is afraid. I don’t think anyone on this campus would be moved to violence.”

When Yiannopoulos arrives in Kane Hall on Friday evening, a sparse crowd dominated by white males, both old and young, is chanting "Trump, Trump, Trump." The show opens with an introductory video created by the College Republicans referring to liberals as “free speech hating cucks” and “retards.” The remarks receive big laughs from the audience.

Yiannopoulos, with bleached blond hair and an Estuary British accent, works an enthusiastic crowd as he delivers a trademark rant, taking aim at several of his favorite targets. He describes protesters as “fat dykes,” targets women with the quip, “girls are retards,” and calls Washington State University Gender Studies Professor Selena Lester Breikks a “crazy batshit bitch” for defining hate speech and outlining consequences to it in a class syllabus.

He also complains about being barred from some universities, noting that schools would never stop a Muslim from speaking, “because that might be racist, or he might explode.”

Yiannopoulos is halfway through his set when the Seattle Police Department tweets that a shooting has occurred during the UW campus demonstrations. A young man in the audience shouts out the news. Then, covering his mouth with one hand, he holds his phone screen toward the audience with the other.

“Is that real?" Yiannopolous asks the audience. "Has that happened?” His tone is still teasing, but he tells everyone to stay in their seats and hurries back stage.

He returns not long after and resumes, saying, “If we don't continue, [the liberals] have won.” After a raucous standing ovation, he proceeds with his speech.

Outside, in Red Square, a chilling scene has been playing out.

According to a student who was present for the clash, several masked anti-fascist demonstrators were throwing Christmas ornaments filled with blue paint into the crowd, while others attempted to rip out bricks lining Red Square to use as weapons. The student, who asked not to be named, also saw what he believed to be “at least three Milo-supporters firing mace into the sky," and was warned by protesters that a “guy was walking openly with a Taser, calling it a flashlight.”

Footage taken by student Texx Spezia-Shwiff offers a similarly violent view of the protest, capturing tensions between the demonstrators as they divide into Trump and anti-Trump sides on Red Square.

Tensions intensify after the anti-fascists, who call themselves Seattle Antifa, arrive dressed in black, many wearing ski masks and goggles. Footage shows a group of women forming a human shield between the groups with the anti-fascist and anti-Trump protesters on one side and Trump supporters pressing in on the other. Occasionally, there are snippets of crowd conversation; the topics are political, the voices are young and the exchanges sound civil.

As things settle down around the video's 24-minute mark, which would have been halfway through Yiannopoulos’ speech, protesters from Downtown Seattle’s Westlake Park march into the square. The camera swings toward Kane Hall, where people are shouting and running, and you hear cameraman Alexander Nelson say, “Oh shit, that’s tear gas.”

At 25 minutes, the camera pans down to the bricks on Red Square; they’re splattered with dark blood. A male voice in the background is speaking: “This dude from the Trump side came over and punched this dude in the face, so this guy in the leather jacket went to defend him, and when he went to the crowd there’s just a loud bang, and they just collapsed.”

Back in the auditorium, Yiannopoulos wraps up a jumbled speech. News of the shooting appears to have left him slightly unraveled (“We don’t have protocol for this,” he notes), and after a few jokes fall flat, he says several times that he is “exhausted.”

But rather than any sense of sobriety in the crowd, there is a sort of manic energy. People are still smiling, they laugh hard at Yiannopoulos’ crudest jokes. As I briefly exit the auditorium to get an update on the shooting, someone wolf-whistles.

Yiannopoulos moves into a bit about the non-existence of rape culture, but later makes frantic jokes about his own rape by a priest at a young age. Buoyed by the audience's reaction, he continues: “I’d have molested me.” The line doesn’t appear in the transcript of his talk posted on Breitbart. Yiannopoulos refers to his experience with sexual assault as a counter-argument to cyber-bullying (the supposed topic of his talk), which he asserts “isn’t real.”

A Seattle police officer takes the stage and tells the audience that they are to be held in the building due to the “very volatile situation” outside in Red Square. The audience is later told to remove their red “Make America Great Again” hats and led to an underground parking garage, where they disperse.

The events of the evening elicited public outcry from city officials, including Seattle Mayor Ed Murray, as well as UW President Ana Marie Cauce, who took to Facebook to express her heartbreak over the incident.

In a message to students the next day, Cauce cited the “legal right of our student groups to invite speakers” as well as freedom of speech in defense of her decision to allow the event. “While canceling this event would have meant canceling a speech by someone whose views I personally find repulsive,” wrote Cauce, “we are bound by the law. … Canceling the event would have sent the message that a risk of disruption or conflict can be used to overwhelm our rights.”

“I take full responsibility for the decision,” Cauce wrote in a Facebook comment, “This was tragic and it happened on my watch.”

Nevertheless, a UW junior, Abigail Solomon, criticized Cauce: “You could have prevented the protests and the shooting from happening by simply listening to the concerns of the students and community, and not allow a literal internet troll to be a keynote speaker at our school.”

Early Friday evening, before the crowd grew large and the police — hundreds, in full riot gear — had appeared in force, a man well beyond college age held an American flag on the steps in front of Kane Hall. “It’s a symbol,” he says, “for the death of the American presidency and the spirit of America’s ideals and democracy.”

“I don’t know what will happen tonight,” he says, “but I’ve been around long enough to know that it may not be pretty.”

On Tuesday, the 34-year-old shooting victim remained at Harborview Medical Center but was upgraded to satisfactory condition. Police had earlier released a 50-year-old man who turned himself in as the shooter; he reportedly told officers he felt threatened. No charges have so far been filed.

Gamble said Monday that some students have told her that, after the Yiannopoulos appearance, they are now more comfortable expressing their personal views, but she isn’t sure how she feels about the events. “It's all still hard to put into words and process what happened outside,” she admitted. “I'm still thinking about it and trying to identify how I feel about it.”