We speak for the tree: A neighborhood conservation story 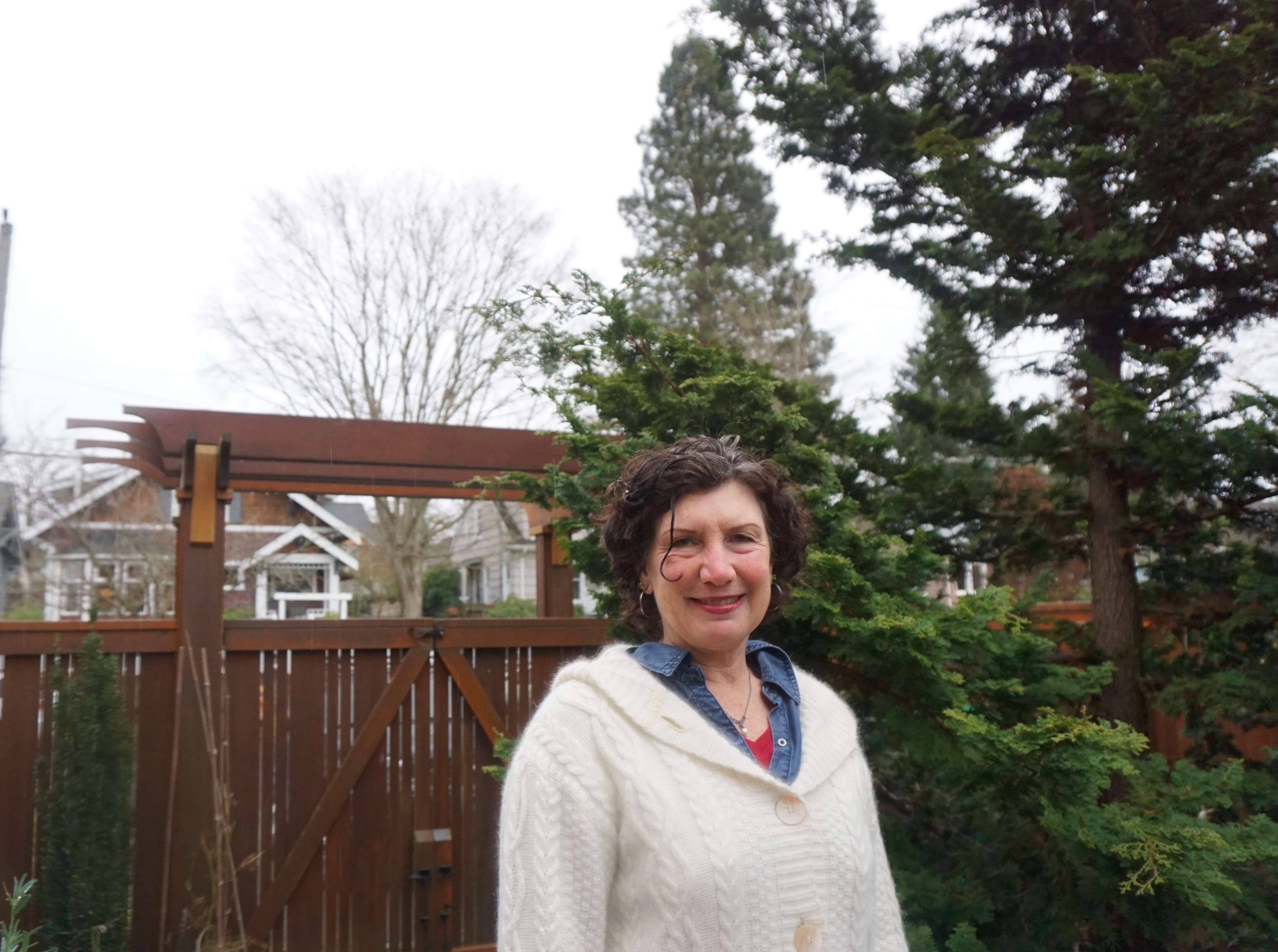 Lisa Parriott in her backyard. The Ponderosa Pine is the tall tree just behind her fence.

Amid all the changes in Seattle, one group of West Seattleites is determined to save a small green patch that characterizes their neighborhood.

They call themselves the Friends of the Silent Giant (FSG) and their goal it to save a 100-foot-tall ponderosa pine from a developer’s plans to chop it down and replace it with what the FSG refers to as yet another “toaster box” home.

As the fight has developed in recent months, the cause has taken on more significance than just the tree; they are seeking changes in what they believe to be an unfair and complex code that favors developers.

They have their first official hearing on the case at 9 a.m. Thursday before a city hearing examiner.

The property in question is a 1930 home located on 39th Avenue near Hiawatha Playfield in the Admiral neighborhood. The tree stands proudly in the side yard, nestled tightly between two houses.

The home was owned by a man who previously lived there for about 40 years. Neighbors say that developer Cliff Low made an all-cash offer on the home the day after it was listed.

Shortly after the purchase, the developer paid the city of Seattle $1,000 for a "letter of opinion" that cleared the way for official permission to build on a newly divided lot. Typically, a lot that small does not permit the building of a home. However, the permission came through the city’s 60-year-old historical lot exception, which even opponents of the project say was established for good purpose. As zoning on some longstanding lots was tightened, they say, the city wanted longtime homeowners to be able to go back and build on property they had been holding with the idea of building a second home.

This discovery sparked the start of Friends of the Silent Giant, who also found that if they want to appeal the opinion that the lot could be developed, they must pay $280 an hour for 10 hours of minimum service for a code interpretation (a rate that went up to $315 Jan. 1). The code interpretation is the only way to get a hearing.

Lisa Parriott lives across the street from the Silent Giant. She, along with the help of some neighbors, spent the $2,800, along with two $85 hearing fees, to challenge the city’s decision to grant historic lot exception.

So far, Parriott has paid nearly $3,000 in fees, and the fees will mount each hour of Thursday’s hearing. She says she is unsure how much her bill will be by the end.

A spokesperson for the city Department of Construction and Inspections said that city review of a construction permit for a new single-family home is an administrative process, where prescriptive code standards must be met to gain approval. “There is no discretion in determining things such as building height, setbacks or even whether a property meets minimum lot size standards for future development,” Bryan Stevens said in an email. “The land use code has very prescriptive standards for determining if a portion of a property can be recognized as a historic undersized legal lot.”

Stevens also said the city found historic records that show the property qualifies as a historic lot, and officials will be at the hearing to discuss the facts.

Efforts to reach Low on Wednesday were unsuccessful but he sent a statement to the West Seattle Blog last June defending his plans: "The tree will need to be removed in that a home could not be built there without removing it. We feel there is also a severe housing crisis in Seattle and this outweighs the desire to retain this tree."

Ultimately, the Friends of the Silent Giant and supporters believe the historic lot exception is out-of-date and needs to be significantly altered or altogether removed.

Mary Fleck, co-chair of the Seattle Green Spaces Coalition, said the historic lot exception used to be in place to empower homeowners, but it has “outlived its purpose and it really should be closed.”

FSG member Zelma Ziemen said that the process of appealing the letter of opinion is too complicated for anyone besides full-time advocates and developers to understand. “And I worked for the city," Ziemen said. "I’ve done environmental permitting, that’s what my career was, and I actually worked in this department for a year, and to me it’s disingenuous."

“It just makes me want to continue to take this challenge on, because who else is going to?” Parriott said.