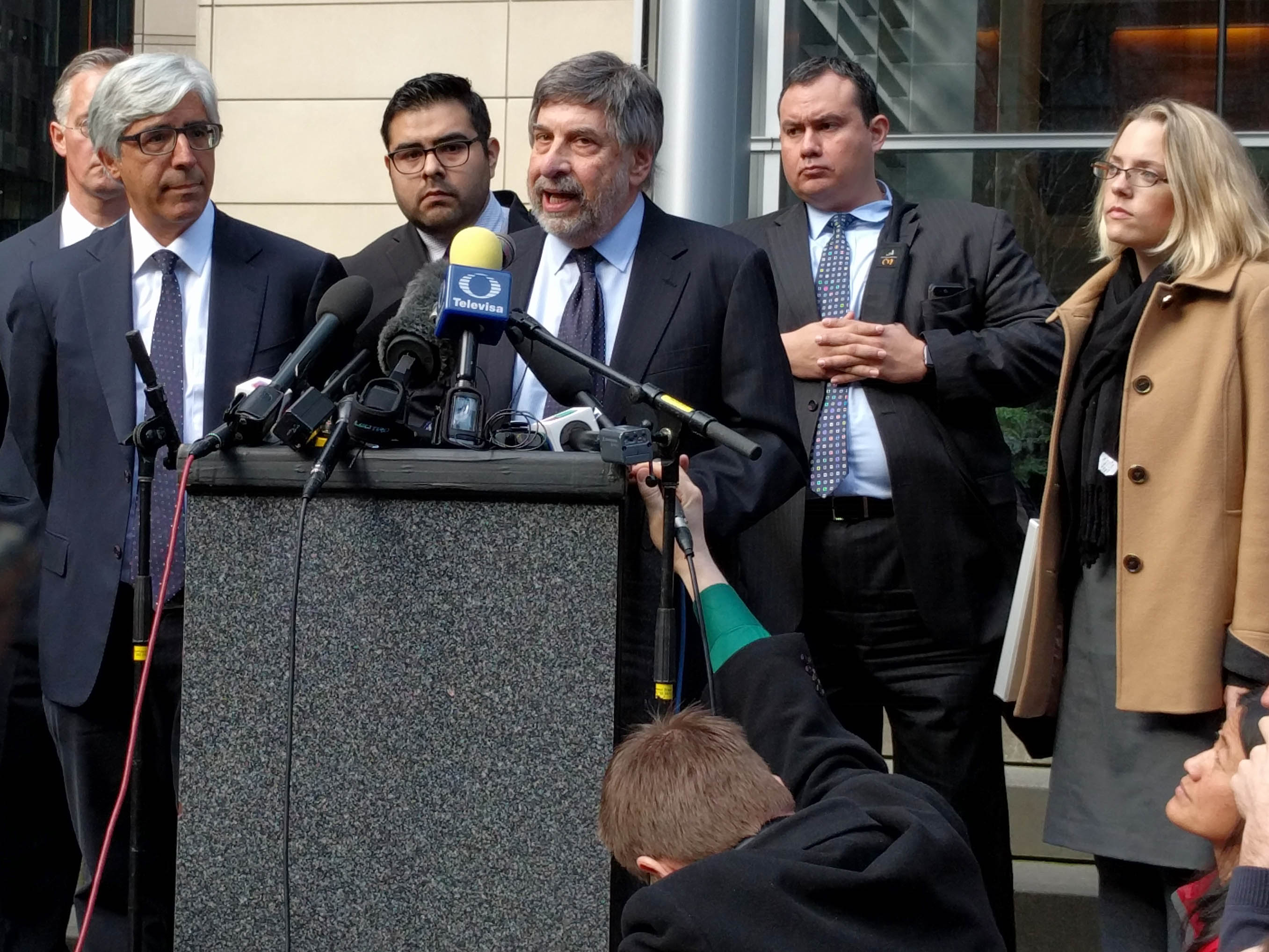 Attorney Mark Rosenbaum, at the microphone, talks to reporters after the hearing for Daniel Ramirez Medina. On his right is fellow attorney Theodore Boutrous.

In a case that could set national precedents, Daniel Ramirez Medina, a 23-year-old beneficiary of President Obama’s Deferred Action for Childhood Arrivals (DACA), will remain in detention in Tacoma. Despite pleading from his lawyers, U.S. Magistrate Judge James Donohue chose, out of what appeared to be an abundance of procedural caution, to kick the case first to a lower immigration court.

The decision was a disappointment for supporters of Ramirez Medina, who has been in detention for a week since Immigration and Customs Enforcement agents raided his home in search of his father. But it does not close any legal doors.

His attorneys, Theodore Boutrous and Mark Rosenbaum, still have their sights set on a precedent-setting decision that would explicitly forbid the federal government from detaining DACA protection recipients without normal probable cause and due process considerations.

Before the attorneys get a chance to make that argument, the immigration court will first take on the case as if it were a more standard immigration dispute, rather than the national microcosm it’s become. In an unusual move, Donohue ordered the case expedited, to be completed in immigration court by the end of next week. (In a sign of how unusual that may be, he asked the U.S. Justice Department lawyers to pass on his apology for the rush to whichever immigration judge handles the case.)

The immigration court could order Ramirez Medina’s release, but that would not mean anything for other DACA recipients nor would it address Boutrous and Rosenbaum’s larger concerns about whether ICE violated Ramirez Medina’s constitutional rights. Judge Donohue made it clear, however, that the case should come straight back to either his court or the court of a U.S. District Court Judge, which seems likely whatever the outcome.

Reuters first broke the news that Ramirez Medina had been detained, the first recorded incident of a DACA recipient being apprehended. His father was reportedly the target of the raid, but Ramirez Medina was arrested. The case is particularly sensitive because hundreds of thousands of young people, in order to obtain DACA status, turned over every detail of their lives. It’s still unclear whether Ramirez Medina’s arrest was a mistake or targeted, but regardless, it set off alarm bells that President Donald Trump’s administration might be weaponizing the reams of information the government holds on these DACA recipients.

Perhaps indicative of the times, even basic facts about the case are in dispute. Quickly after his arrest, the Department of Homeland Security released a statement saying Ramirez Medina was an admitted gang member and a public safety threat and therefore not entitled to his DACA status. Not only have his lawyers disputed this — pointing to his clean criminal record and twice-approved DACA status — they’ve accused the federal government of doctoring files to make it look like Ramirez Medina was confessing to gang affiliation when he was not.

The arguments before the court Friday ended up focused largely on jurisdiction. In its brief and in court, the federal government sought to paint the case as a more standard immigration case, one in which so-called removal proceedings (aimed at deportation) had already begun. In that context, it is indeed the jurisdiction of lower immigration courts to rule. Although Ramirez Medina is, under current law, allowed to stay in this country, the federal government is contending that his accused affiliation with gangs revokes that right.

But Ramirez Medina’s attorneys hammered on this not being a typical immigration case at all. As a DACA recipient, they argued, Ramirez Medina has a constitutional right to due process and probable cause protections. The federal government has presented very little in the way of evidence that Ramirez Medina was a threat or at all affiliated with gangs. Therefore, the attorneys argue, his arrest and detention are both unconstitutional. What’s really being argued, they said, is a “classic habeas case” related to whether Ramirez Medina’s arrest was legal or not. Under that lens, Donohue’s courtroom is just the place.

“If the court didn’t have jurisdiction, what would it mean?” asked Rosenbaum. “…It would mean that ICE could come in kidnap him, put a bag on his head, take him to facilities” and then later contend that the case should focus on removal proceedings, not the arrest itself. Their biggest worry was that the government could use an unconstitutional arrest as a means to overturn his DACA status, therefore making his arrest constitutional — “a true Catch-22,” said Rosenbaum.

On top of that, his lawyers sought “declaratory relief” for all DACA recipients, a ruling from the court that would make explicit that each is guaranteed the same constitutional rights as citizens. Whether granted or denied, the decision on that request could set a far-reaching precedent.

A spokesperson for the U.S. Attorney in Western Washington said Justice Department attorneys had no comment on the case.

Judge Donohue clearly did not feel comfortable going around the lower courts. “I feel it is my duty to refer the case to an immigration judge,” he said, but added, “It does not defer the fact that substantive issues of due process [must] be considered.”

That immigration hearing will conclude by next Friday and then the next District Court hearing will occur March 8. When the case returns, it would like go to U.S. District Court Judge Ricardo Martinez, unless the two parties agree to let it go back to Magistrate Judge Donohue’s desk, something he’s open to. “I think it’s an interesting case and I’d love to be involved,” he said.

The case could end in a number of different ways. Ramirez Medina could either stay in detention, be deported or be released, all as an individual case. Or his case could lead to a road map for future cases.

In the meantime, he has at least a week and likely more to spend in the detention center in Tacoma.