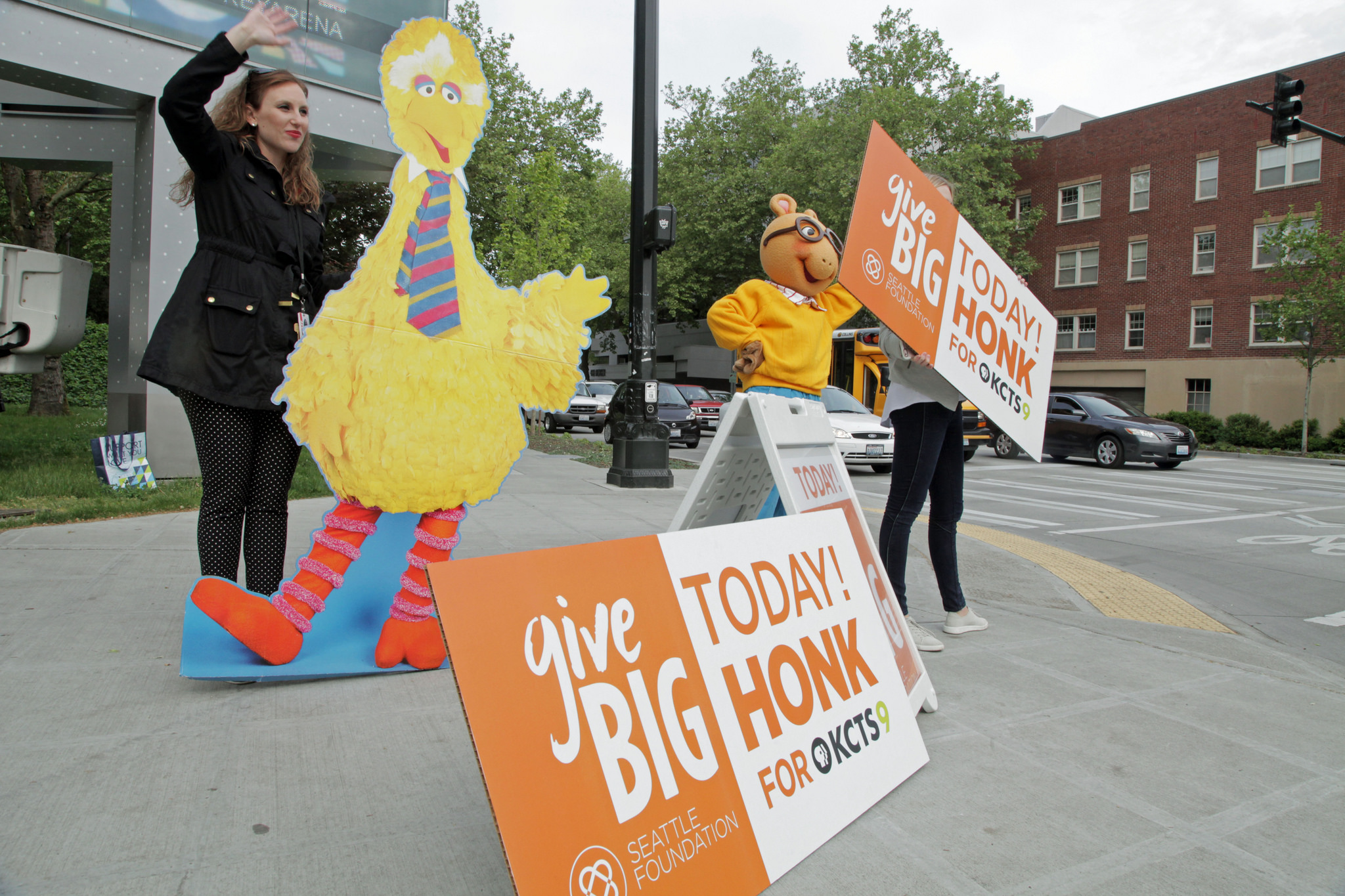 Fund-raising last year for KCTS 9, on a corner at the edge of the Seattle Center campus.

Editors’ note: This guest opinion advocates for a center that could be of benefit to Crosscut, its sister organization KCTS 9 public television and their parent organization, Cascade Public Media. They are all currently housed in a building on the Seattle Center campus. Cascade owns the building and leases the land from the city, but the lease expires at the end of 2024. The author has been in contact with Cascade Public Media CEO Rob Dunlop about this proposal.

We have entered a post-factual world.

The president of the United States verbally attacks journalists and repeats false statements over and over. He threatens reporters and contends that they will suffer consequences because he disagrees with their reporting.

Traditional media — newspapers, magazines, radio and television — are going through an economic realignment that threatens the essence of a free press by eliminating many of the outlets we have relied on for objective, independent and factual reporting. Consolidation of media voices through acquisitions and mergers carries with it the great risk of reducing diversity of thought and perspective.

The economic pressures media outlets face today have impacted our region. We used to have two daily newspapers; The Seattle Post Intelligencer stopped its print edition in March, 2009 after 146 years of publication. The Seattle Times struggles and has paid for early retirements and laid off dozens of employees. Many radio reporters used to cover City Hall in person nearly every day; we rarely see any of them today. Local TV stations have cut back local news production and let reporters go.

A vibrant and free press is the essential element for sustaining our democracy. Thomas Jefferson understood this 230 years ago, when he wrote to a friend, “The basis of our governments being the opinion of the people, the very first object should be to keep that right; and were it left to me to decide whether we should have a government without newspapers or newspapers without a government, I should not hesitate a moment to prefer the latter.”

We have an opportunity to reverse the decline of media, to bolster and invigorate a free press, to contribute to a stronger, independent, objective and factual journalism.

One idea that I love is to create something called the Center for Public Media at Seattle Center. There is historic precedent for it, too.

In 1967, Congress created the Corporation for Public Broadcasting, which today stewards the federal government’s support of 1,500 locally owned and operated public radio and television stations. In 1969, Congress created the Public Broadcasting System (PBS) to strengthen the education television network. KCTS 9 is our Seattle PBS station. In 1970, Congress created National Public Radio (NPR), which we hear locally on KUOW and KNKX. These government-created and funded media voices have played a crucial role in sustaining the independent and objective journalism we so urgently need today.

Can you imagine a news media mix without NPR? I listen constantly and appreciate the in-depth coverage, diversity of opinion and fact-based reporting. But this type of journalism is at risk and that’s why we should act now.

City government should create The Center for Public Media at Seattle Center. KCTS, KEXP and Crosscut, all nonprofit media outlets, are already located at the Center. Our local NPR stations have indicated they may need new and expanded facilities soon. The Seattle Channel, our award-winning city government-run TV-Internet outlet needs expanded and overhauled space. Some of our ethnic media outlets may want to be co-located at the Center as well.

We could contribute capital dollars for construction and maintenance, perhaps in collaboration with private investors who may want to partner with the city for other facilities at the Center. Think Key Arena, the new Seattle Opera Center and more.

The people of Seattle have a stake in preserving a free press. It’s imperative we do so.

We could sit back and watch as our media voices are consumed by the economic forces wreaking havoc on our traditional media and our president pursues his vindictive and destructive attacks on journalists. Or, through city government, we can do our part to make sure we have many thriving, independent, objective and fact-based media voices in Seattle.

A post-factual world? Or a world infused with objective, fact-based journalism? Seattle can and should lead the way on this important mission.