A future star in Olympia? 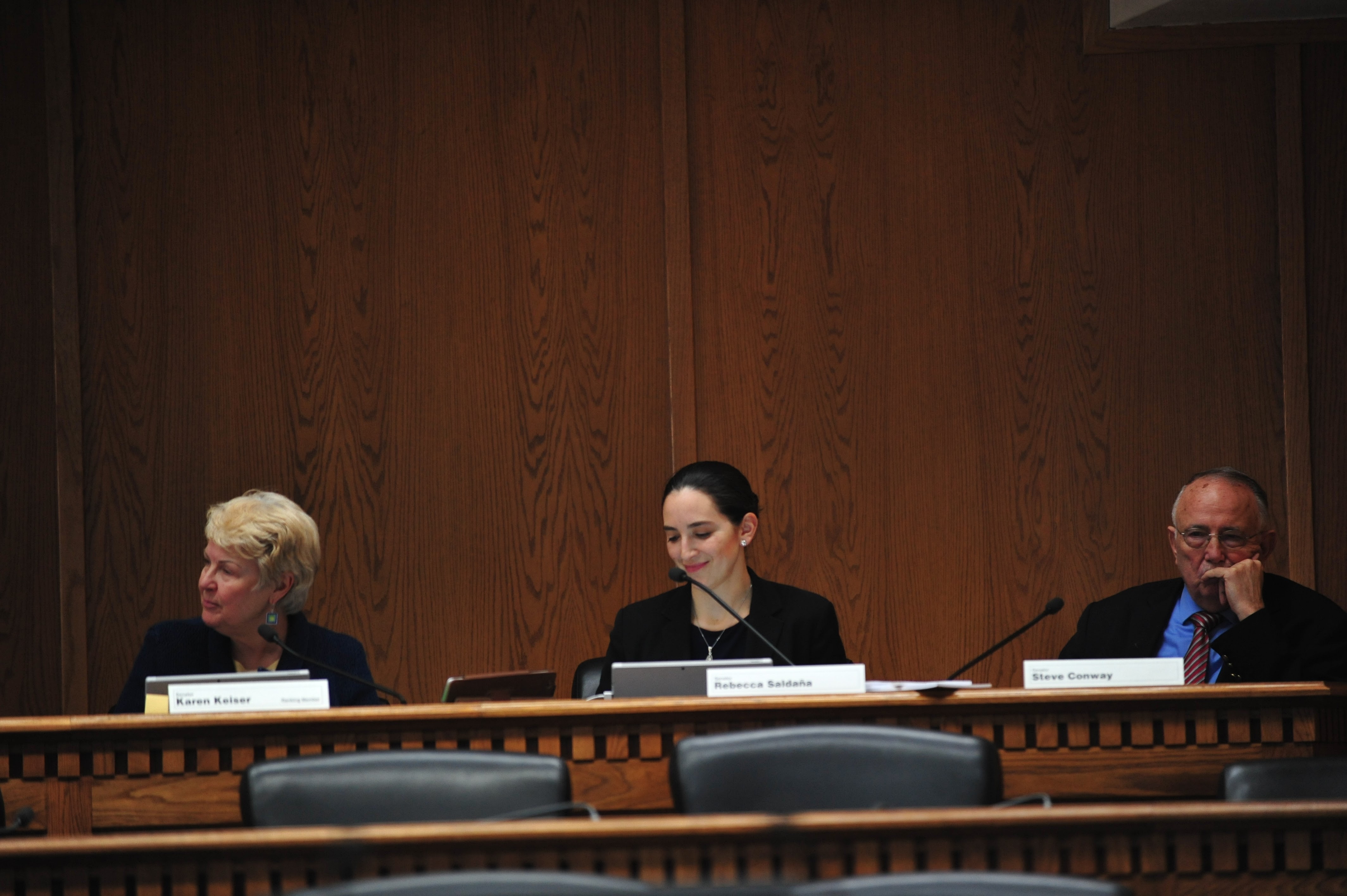 Rebecca Saldaña in a Senate Commerce and Labor Committee meeting.

It’s mid-morning, and Sen. Rebecca Saldaña is in her office, listening to a briefing from a nonprofit. Somewhere nearby, a phone rings with the odd high-then-low tone of phones in Olympia's classic, marbled John Cherburg building, where most of the state’s senators have their offices.

With the smallest of motions, her head turns and her eyes flick to a nearby clock.

And somehow, you can tell that Saldaña, newly appointed to represent much of south Seattle, means exactly one minute. Still, sitting by a small table, Saldaña exudes no sense of hurry, even as an advocate for health care for Latinos wraps up the short briefing.

Instead, over the course of her first months as a member of the state Senate, she appears to have adjusted completely to the sense of constant motion that defines the place.

A former labor organizer, Saldaña, who worked with SEIU and an Oregon farmworker's union before going on to the head advocacy group Puget Sound Sage, was appointed last fall to fill the 37th District seat vacated when Pramila Jayapal was elected to the U.S. House of Representatives.

The selection process brought controversy when some said big labor groups from outside the district weighed in on her behalf, giving her an edge over another popular local candidate. Yet, by all accounts Saldaña is off to a strong start, assuaging even some of her critics, and leaving looming only the question of whether she, apparently a rising star, will stick around for the long, frustrating work of legislation.

Saldaña’s background with labor and advocacy groups, including as the head of Puget Sound Sage, shows in her new office, where seven of the 10 framed posters on the walls memorialize labor struggles or efforts for migrant rights. Three feature Cesar Chavez quotes.

It also shows in her work in the capital. Her first three proposals focused on giving released prisoners a better shot at finding work, getting low-income and transient voters registered, and fighting human trafficking — all ambitious swings at challenging issues.

Freshman legislators always walk into a difficult situation: Constituents back home expect results, but down in Olympia they’re the new kid in class, and the power brokers in the Legislature often aren’t terribly interested in their big ideas.

But Saldaña's proposal to help reformed criminals attracted the interest of prominent Republican Sen. Michael Baumgartner, R-Spokane, who offered to team up on it. Baumgartner ultimately authored his own bill with Saldaña co-sponsor, and it succesfully passed out of the committee he chairs.

Referred to as “Ban the Box,” the measure would generally prohibit employers from inquiring about criminal backgrounds on initial applications, where currently applicants are often asked to check a box if they’ve ever been convicted of a crime.

Ultimately the two ended up disagreeing on a key point within the bill, and the rift proved deep enough that Saldaña actually voted against sending it out of committee. Yet, probably regardless of the ultimate fate of the proposal itself, for Saldaña, having partnered so early on with a prominent Republican on a high-profile issue is a success in its own right.

Saldaña’s adjustment to the place seems more than skin-deep. With the beginnings of an ease that sometimes escapes even experienced politicians, she deftly pivots conversations away from the personal, the tentative or the ambiguous, to the type of broad, unimpeachable statements that stump speeches are made of.

Compared to the work of an activist, Saldaña said, where an initiative or proposal can be written exactly the way a group wants, then pushed aggressively, the Legislature is an altogether slower machine to handle.

“It is interesting, but I’m not sure I’m quite in the place yet where incrementalism is my favorite strategy,” she said. Just at the point where a complaint might have begun, however, she seemed to catch herself, just in time for the pivot — away from the idea that it might be a frustrating experience, away from the negative and toward the broad and positive.

“But I do value and recognize that with large institutions, with policies that impact the whole state,” she added, “there is a need to make sure that you move slow enough to get it right, with the least amount of unintended consequences."

Perhaps that polish reflects her time at the head of Sage — or her earning leadership certificates from both Harvard’s Kennedy School of Government and the National Hispaña Leadership Institute.

Some amount of political maneuvering is clearly also part of what gained Saldaña her seat in the first place. Her appointment to Jayapal’s spot gained attention for the fact that, in a rare if not unprecedented move, the King County Council went around local Democratic precinct officers’ first choice to pick Saldaña, the second choice.

After their own vote, district residents serving as precinct committee officers last fall sent their top three picks to the county council to fill the vacancy. Saldaña was number two on the list: Their first choice was Rory O’Sullivan, a lawyer known for his work with a tenants' rights clinic and a long-serving member of the 37th district Democrats.

The flash point was race and representation, a potent topic in a district known as one of the state’s most diverse. According to multiple sources, O’Sullivan, who is white, gained the majority of the votes of the minority and women precinct committee officers. But the council chose Saldaña, whose bio at Sage described her as a Seattle Chicana born of Mexican and German roots. Multiple council members pointed to Jayapal’s endorsement, and said that the Senate needed at least one woman of color.

That left a sour taste in the mouths of some in the district, who felt that their choice had been overrun, including Akilah Stewart, who helps run her family’s CPA business.

“I’m African-American, I grew up in the Central Area, I went to public schools … and it was offensive that the county council told me that I didn’t know who could best represent me and my interests,” Stewart said.

Adding that she liked both Saldaña and O’Sullivan, Stewart said O’Sullivan seemed to have a better plan for bringing economic opportunity to the district, which appealed to her more than Saldaña’s labor and social justice focus.

While both had local support in the district, Seattle labor organizations organized their members to lobby the council for Saldaña. Combined with Jayapal’s endorsement, that seemed to be a deciding factor.

Michael Wolfe, a former chair of the 37th District Democrats, said he endorsed Saldaña, but was frank about the situation. “The [Democratic] establishment had their candidate, and that was her,” said Wolfe. “The fortunate side of it was that she was an excellent candidate, and is making an excellent senator.”

Saldaña responded with relative aplomb when asked about the controversy. Stepping deftly around commenting directly on it, she instead simply stated the truth as she sees it: She is a part of the community, where she lives and back to which she commutes every night. She names an in-district event for a local group she attended days before.

Her test, then, will be twofold. First, there’s the question of the election. In November her seat will be up for a special election. Although the district is safely Democratic, she could face a primary challenger — O’Sullivan has made no statement that he won’t run.

The larger question, though, seems to be one of her own success, and just where she is satisfied ending up. Saldaña is clearly something of a rising star, from humble beginnings as a labor organizer, to leading Sage, a prominent non-profit, to stepping directly into a safely Democratic Senate seat.

The temptation to keep on rising — whether in politics or to a higher position outside the government — will be strong.

For her part, Saldaña says she wants to stick around in the Legislature, not only through the special election that will be held in November, but for re-election in 2018, when the 37th District seat will be up for a full four-year term.

If that remains the case, it could mean the settling-in of a champion for the district, and one who brings a sizable dose of street smarts to the job.

Yet the battles she seems keen to take up are not overnight affairs. While a lucky break gave her a prominent partner on her ban-the-box idea early in her first session, equally worthy proposals have languished for years while their champions chiseled away in the legislative mines. Rep. Sharon Tomiko-Santos, one of the 37th's two House members, recently spent seven years pushing an education equity bill to its eventuall passage, a testament to the extreme patience the job requires.

Saldaña’s re-election is a guess, but it seems the educated one. The tension over whether she best represents the district will inevitably linger, but the endorsement of the Seattle labor establishment, combined with the incumbent’s advantage, are signs pointing one way.

What’s less clear is whether the tedious work of legislating will retain its luster, a year from now, or maybe four, for a campaigner who cut her teeth on picket lines.