Under Trump, Seattle and its businesses come together 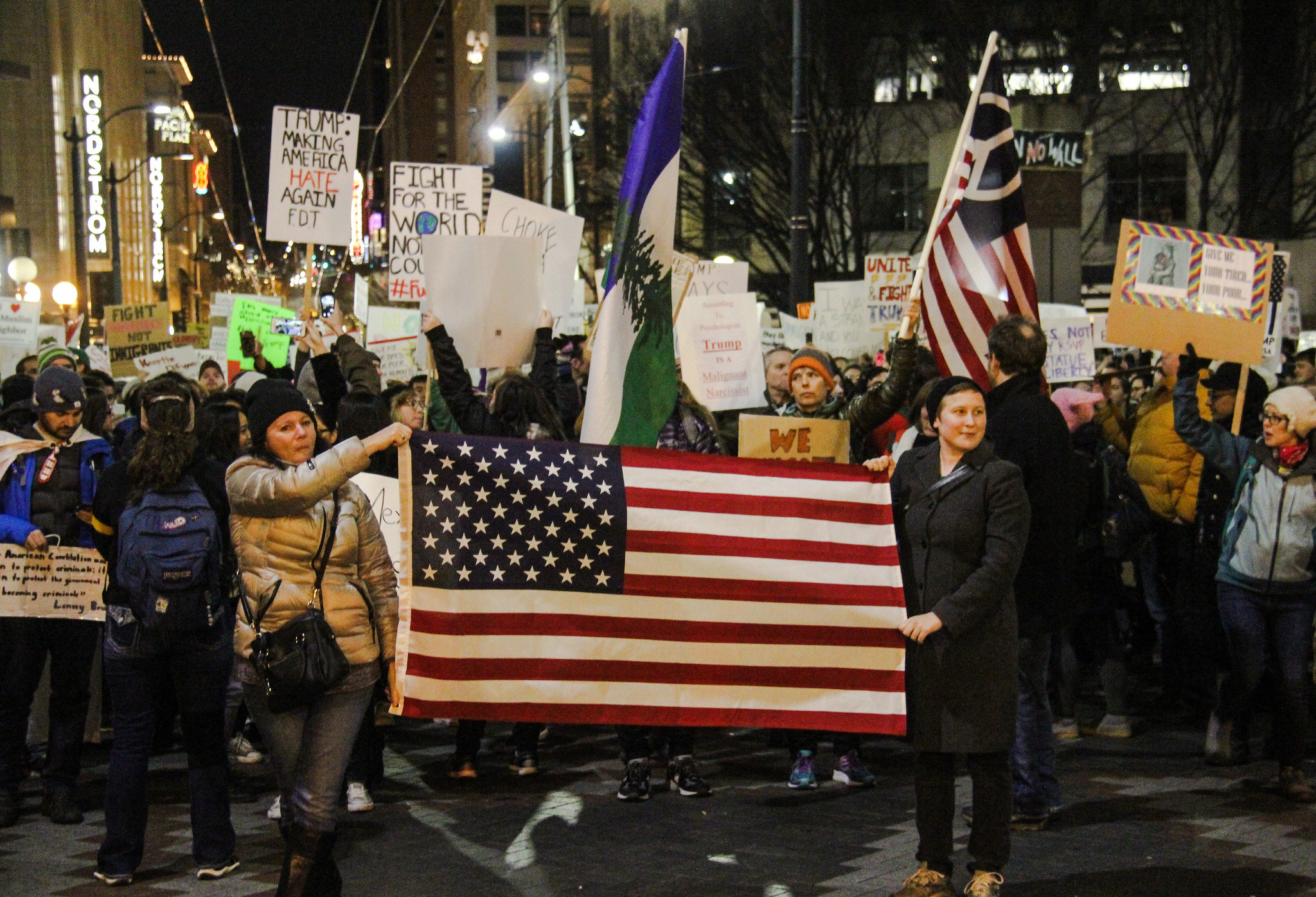 A January march in downtown Seattle protesting the executive order on immigration.

Neo-feudalism seems to be the order of the day.

Voters in cities like Seattle prepare for a long siege behind their urban walls, though political bubbles don’t necessarily make strong fortresses. Still, for immigrants, LBGTQ folks, progressives and others with a lot to lose, there seems to be safety in numbers and in the commitment of politicians, like Ed Murray, who vow to resist.

A good defense is the best offense. Washington state’s pols — notably Gov. Jay Inslee and Attorney General Bob Ferguson — have thrown down the gauntlet and ventured into the courts and airports to push back. They have won the first two legal skirmishes over President Donald Trump’s attempt to pull up the drawbridge on refugees and immigrants from seven Muslim countries with his executive order.

In this atmosphere, citizens flock to support — or seek protection of — their corporate liege lords. I make a point now of going to Starbucks more often to show support their pledge to hire refugees. I make a point of telling the baristas that I approve of their refugee and veterans hiring programs. The fact that Trump supporters are pushing back just makes the charred grounds taste all the sweeter. I love the smell of Pike Place Blend in the morning, for now.

Nordstrom — the ultimate Seattle brand representing middle-of-the-roadness — is now in trouble with the angry Toddler King for deciding not to carry Ivanka Trump’s fashion line. They say it isn’t selling — a business decision, not a political one and that’s not hard to believe. The Nordstrom family are hardly wild-ass Trotskyites. At least I’ve never recognized one at a Sawant rally. But who knows? Former chair of the state Republican Party Chris Vance was out there protesting at Westlake. Anything is possible.

The Toddler King has thrown a fit, defending his daughter against sensible, successful Scandinavian-descended shoe salespeople (damned immigrants!). One of his top aides, Kellyanne Conway, has even apparently broken the law to use the White House to advertise Ivanka’s gear. Trump approves and Conway will have a pardon if she needs one. Pappa Trump’s defense of Ivanka suggested that we all better not mess with her if we know what’s good for us, because she’s the good princess who keeps the angry sovereign in line. We’re getting Tudor-style government to go with our faux Tudor houses!

By the way, we’ve also recently learned that the King’s man, Steve Bannon, views himself as a modern-day Thomas Cromwell, Henry VIII’s go-to guy. If you know the story, it doesn’t exactly speak well of his boss. Spoiler alert: Thomas Cromwell eventually lost his head.

The delightful thing is that in the joust between Nordstrom v. Trump, the shareholders prefer Nordstrom stock over Trump shock. I think that Seattle’s most radical elements should patronize the Rack (speaking of medieval names). Imagine if Antifa activists showed up at demonstration dressed like Young Republicans? Ah, the chaos.

Other Seattle corporate overlords have tangled with Trump: Microsoft, Amazon, Apple, Google, IBM and scores of other tech companies have opposed his immigration ban. Boeing has suffered his wrath over the cost of the new Air Force One, though Trump complains the towels on the current plane aren’t soft enough. Who will lose their head over that? I suspect Ivanka’s bath collection will find a new home.

In short, the Trump resistance goes beyond public officials, social-service providers, environmentalists, scientists and other people who practice witchcraft for the benefit of the people, but is reaching into the merchant class and business leaders who might have thought they were immune since they help drive an economy that creates the jobs that Trump promises.

Seattle loves to love its big corporate brands. We take pride in their success, even if we sometimes disparage their authenticity or ethics. Now we’ll have to defend them and be defended by them if we’re going to make it through this siege.