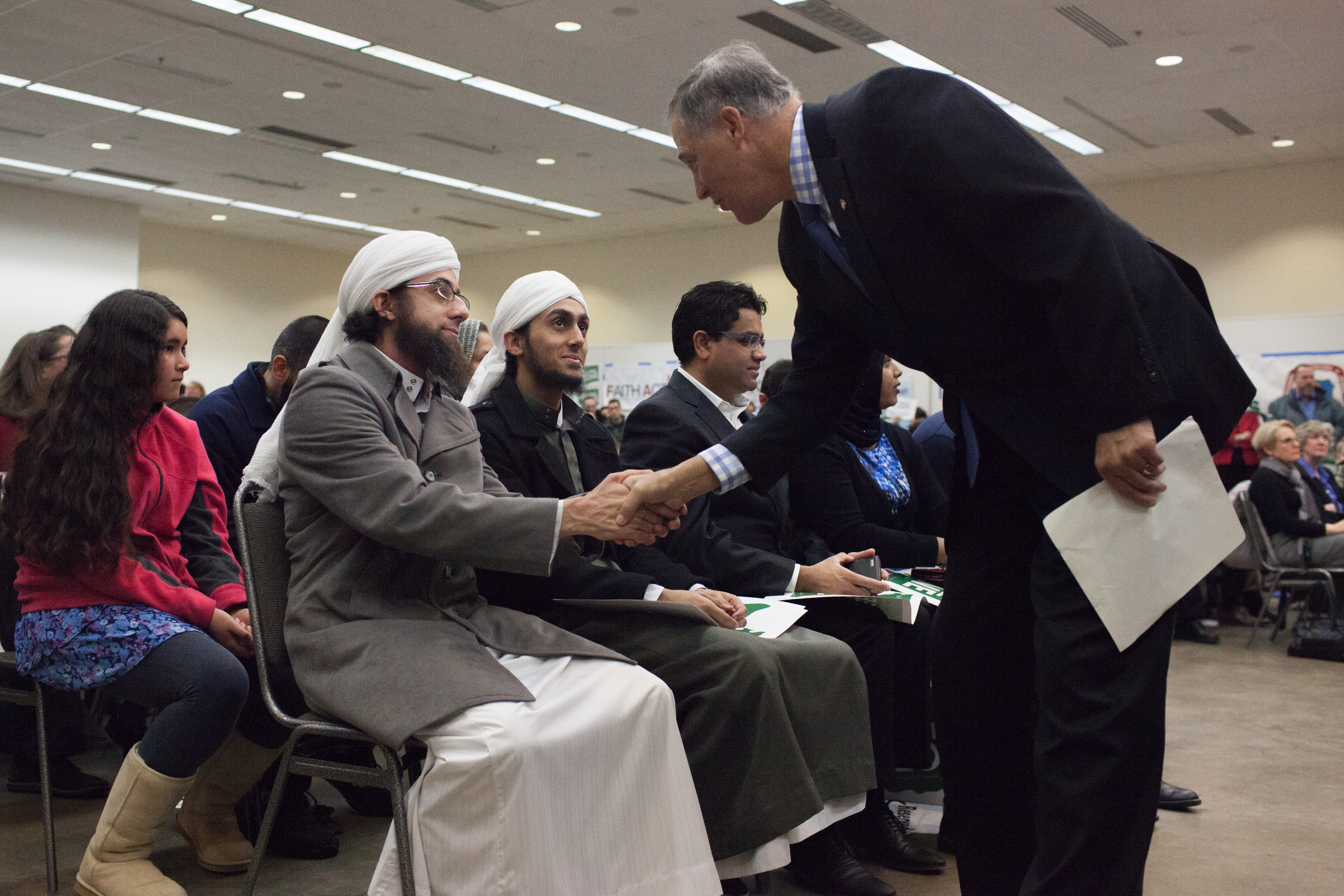 With an executive order from the governor, a lawsuit and a trio of bills, Democratic leaders in Olympia have shaped a response to President Donald Trump’s immigration agenda that is notable for its loud resistance on multiple fronts. But the response, other than the lawsuit, also is stopping short of action taken in some other states.

Gov. Jay Inslee’s executive order, which he rolled out last week, bars state agencies like the Washington State Patrol from taking part in immigration crackdowns targeting non-criminals. It came out of the same closed-door discussions among Democrats in Olympia that produced three bills in the state House the week before, including one that would set a narrower version of the same prohibition into law. And Washington Attorney General Bob Ferguson made national and even international news when, alongside Inslee, he launched a lawsuit that has blocked the key parts of the Trump executive order freezing immigration and refugee flows from seven majority-Muslim nations.

Elected officials here have been clear that they are still assessing how to respond to the Trump adiminstration, which is still in its early days. But many have been quick to praise their leadership. The Nation gave Inslee prominent place in a story headlined, “West Coast politicians are fighting back against Donald Trump.” And Inslee couldn’t resist a little state pride while talking with KCTS 9’s Enrique Cerna last month about the lawsuit, saying, “I’m glad that … we’ve got courage in this state to show the way to the rest of the country.

But, as aggressive as the state's moves are, each also displays a clear limit, and with the exception of Ferguson’s lawsuit, stops short of action taken in at least some other state. Together, they point to a question of how deeply officials are interested in wading into a fight against Trump that may stray from the photogenic and into more ambiguous territory where state powers and options for challenging federal action are unclear. Among those questions: What to do about reports of federal agents checking papers at a bus terminal in Spokane, or the prospect of a return to George W. Bush-era immigration checkpoints on the Olympic Peninsula?

So far, it’s unclear whether the Trump administration may want to return some of the most aggressive tactics used by U.S. Customs and Border Patrol such as the checkpoints, which were the subject of controversy in 2008 and 2009. But the Spokane episode, verified by the Northwest Immigrants Rights Project, and an apparent increase in detentions by Immigration and Customs Enforcement, both raise worrying questions about activities that could have deeper day-to-day impacts  than Trump’s ignominiously failed immigration order.

“We are definitely seeing an increase in activity from ICE,” said Jorge Barón, head of the Northwest Immigrants’ Rights Project, the only non-government group that is able to regularly meet with detainees facing deportation in the state.

So far, much of that has meant targeting those with pre-existing deportation orders, but the agency apparently has also shifted to frequently detaining those who happen to be nearby when ICE agents show up. According to Barón and other advocates, that means people without records are being swept up for being without documentation in the wrong place at the wrong time.

And Barón said his organization received multiple reports of Border Patrol agents stationing themselves near a public bus terminal in Spokane earlier this month, and periodically pulling people off of buses.

The actions taken by state officials, while bold, so far largely sidestep any direct approach to increased ICE raids, or the kind of activity by the Border Patrol that Barón describes. Instead, they sketch out an approach geared toward pre-empting any coordination between federal and state agencies on immigration, and taking specific, limited steps to shield migrants at the state level. And with one exception, they avoid actively assisting migrants, especially the undocumented.

There are few clear avenues by which the state can directly resist Trump’s orders. Laws that target immigrants are typically federal, meaning that as with the president’s executive order, fighting them directly requires a lawsuit. And states challenging federal laws often are at a disadvantage since, under the Constitution, they generally rank below the U.S. government in powers. At the same time, however, examples exist of other states — and especially one other state — doing more.

The three bills in the state House move in the same direction. Based according to one of the bill’s sponsors on the same internal discussions that shaped Inslee’s order, they propose limiting information-sharing that could facilitate a religious registry, appointing guardians to immigrant minors left in the country when their parents are forced to leave, and establishing a hotline for immigrants to report bias crimes and connect with legal assistance.

Yet, while a hotline is the subject of one of the three House bills, the proposal’s fate is an open question, and the idea that creating such a hotline requires an act of the Legislature is an example of caution in the extreme: The attorney general of Massachusetts created one to track hate and bias incidents less than a week after the November election.

While the FBI tracks hate crimes around the country, advocates described a variety of less serious incidents that aren’t tracked, ranging from graffiti to the harassment of women wearing hijabs. Anecdotal reports point to an increase.

Colleen Melody, head of the 12-person civil rights unit within the Washington Attorney General’s Office, said that the unit does have a toll-free number for civil rights complaints. But instead of being live, the number leads callers to a voicemail that is then checked by staff later.

Another strategy for directly assisting immigrants that has been embraced around the country is the creation of legal defense funds. Immigrants facing deportation aren’t entitled to an attorney the way criminal defendants are, but following Trump’s election, city councils in Seattle, San Francisco, Los Angeles, Chicago, and Washington, D.C., have pledged funds ranging between $500,000 and $10 million to pay for defense attorneys for immigrants caught in a crackdown.

All of it might be easy to dismiss if another state hadn’t already checked both boxes — plus one more — less than a month after Trump’s election. By Nov. 20, New York Gov. Andrew Cuomo had launched a toll-free hotline for bias incidents, set up a legal defense fund for immigrants, and established a dedicated unit within the New York State Patrol to investigate bias and hate crimes.

Inslee has demonstrated the power of his office in the past. Last year he famously launched a late-night blockade, threatening to veto every bill sent to him until the Legislature completed budget negotiations and authorized a school funding task force. And in 2013 he even forced legislators to return to the Capitol in November for a special session with one goal: rewriting tax breaks for Boeing. For now, however, that power is one he appears content to wield strategically.

And, while Washington Attorney General Bob Ferguson has received praise nationally and abroad for both his courage and legal tactics in the state’s dramatic success in blocking Trump’s immigration order, there's another step he hasn’t taken: So far, his office hasn’t filed an amicus brief in the case of Daniel Ramirez Medina, the Mexican citizen and Deferred Action for Childhood Arrivals beneficiary picked up by ICE last month. While an attorney general is generally only able to get directly involved in cases that affect the state’s interests, an amicus brief is a common way for third parties to offer their opinion to a court, and can influence the outcome.

Perhaps ironically, the question of how to respond to Trump on specifics may be one that looms larger for state leaders if Trump starts thinking smaller. With the stifling of his most dramatic executive order, Trump could turn to avenues — like formal and informal directions to agencies to increase certain types of enforcement, or coordinating with congressional leaders to push an expansion of deportable offenses — that would stand up to legal challenges.

That would test exactly how far officials including Inslee and Ferguson are willing to follow Trump into the weeds of, say, pushing back against increased actions by the Border Patrol within the 100 mile radius of the border where they have special legal powers. Even if state police don't get involved with helping them, federal agents can — and already do — arrest people in, for instance, the middle of downtown Seattle.

Inslee and Ferguson were unavailable to comment Thursday afternoon for this story, but spokespersons from both offices defended their efforts.

“While there’s plenty of credit to go around, I’m sure I don’t need to remind you that the Washington State Attorney General’s Office filed the first lawsuit on behalf of the state,” wrote a spokesperson from Ferguson’s office in an email, noting that the injunction it won is still in effect. The spokesperson also pointed to past legal cases enhancing general legal protections for migrants.

Along with his executive order, wrote a spokesperson from Inslee’s office, “Governor Inslee has also been on record, numerous times, in strong support of protections for immigrants and refugees dating back long before President Trump.”

The law is fairly clear in limiting the governor’s direct power over cities and counties — including local police — so long as they follow state law. So, while he has set an example of the approach he favors and has spoken of the public-safety value of having immigrants unafraid of their local police, it's up to cities how their police operate.

With a crowded calendar, the Legislature may not get around to changing state law to protect immigrants. But what is available to both Inslee and Ferguson, as independently elected officials is the ability to start initiatives, assign staff and set up task forces within their own offices.

Either one, for example, could start or help start a staffed hotline to answer basic questions and connect immigrants with legal help from nonprofits around the state. Either one could also direct their staff to begin the work of tracking not only hate crimes, but also bias incidents around the state, something lawmakers and advocates alike expressed surprise isn’t already being done.

And either one could use their bully pulpits, magnified by airtime on national TV news, to start the conversation now about what advocates consider the very real prospect of increased enforcement action that falls within the scope of existing law. They could talk about whether the state is ready to accept the idea of agents at bus stations pulling people aside for questioning based on some set of assumptions around skin complexion.

For now, it’s clear is that the state is responding to Trump, and doing so in ways that anger his supporters in Washington and elsewhere. Inslee’s executive order sets clear limits on cooperation by state personnel — especially the State Patrol — with ICE, and Ferguson’s lawsuit set a national precedent for responding to orders of questionable constitutionality. Whether or not those two moves put Washington in the lead of the liberal movement to resist the president, though, seems an open question.