Has Seattle finally figured out redevelopment? 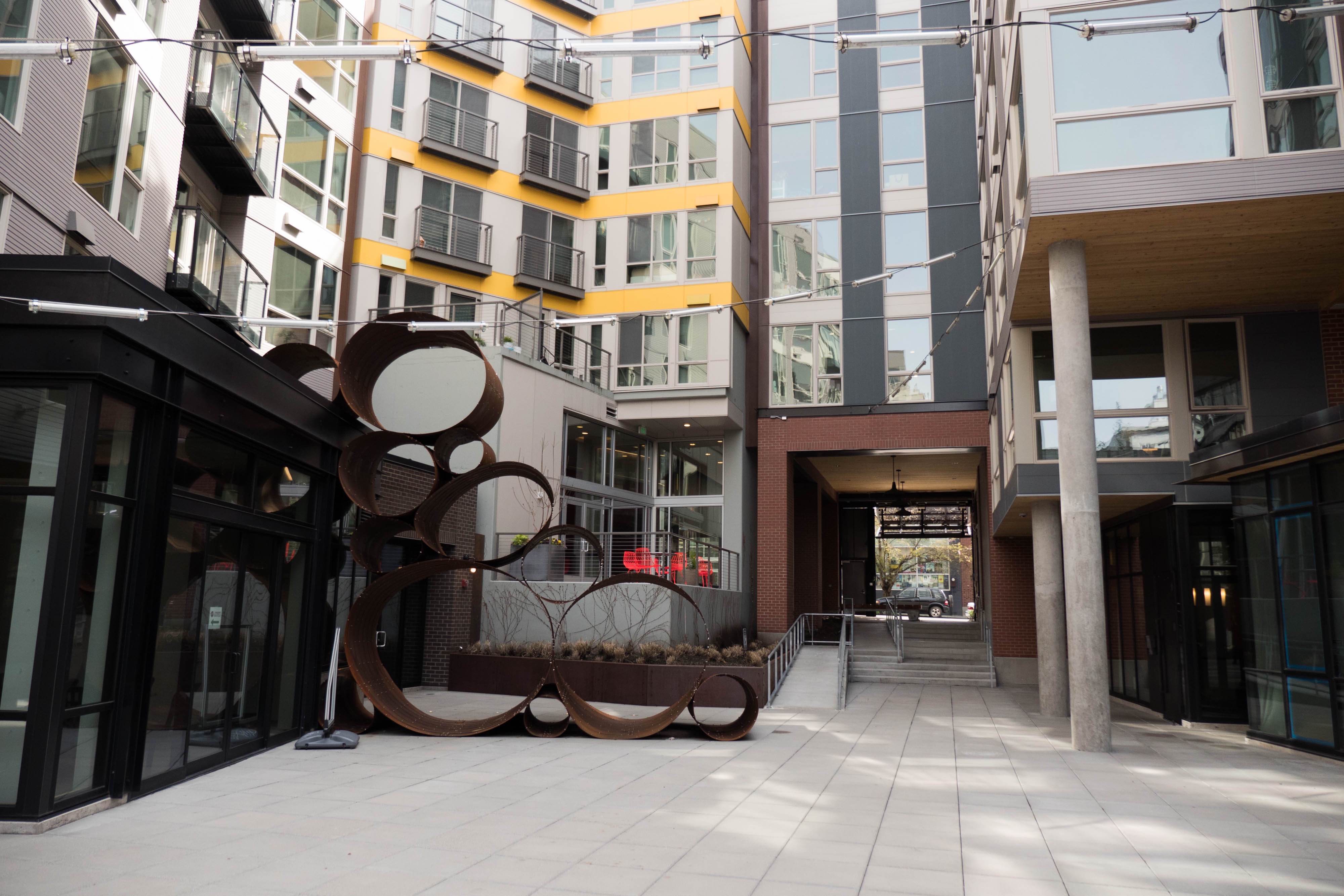 A public courtyard brings light to a redeveloped portion of the block.

Over the last few years, virtually every neighborhood in Seattle has seemingly been inundated with large development projects. Entire blocks have been transformed with new buildings — often of a much larger scale than existed previously.

The drive for development has produced challenges that need to be met well if we are to have a city that is as livable as it is popular in the imagination of those who are moving here.

The development pressure has been the result of a convergence of several forces.

First, Seattle is one of the top 10 cities seen as hot urban places by millennials. And lots of tech companies here (not just Amazon) are hiring: By some counts hundreds of new people are moving in every week. And they mainly want to locate in a handful of places that offer good transit access, proximity to food, restaurants and drinking spots, and places to run or bike.

Second, since the end of the great recession, ample financing has been available for rental apartments. Only a fraction of the millennial demographic can afford to buy. Even if they could, almost no condominiums have been built in recent years, due to costly settlements of lawsuits over the poor construction practices during previous development cycles. Banks don’t like making big payouts to home owners’ associations and their ambulance-chasing attorneys.

Third, years ago Seattle adopted long-term policies that directed development into a couple of dozen designated areas, leaving other areas (districts of mainly single-family houses) pretty much untouched. Of course, now there is a huge political debate over whether this was a good move or a shortsighted one.

But back to the millennials, there has been a sea change in housing preferences. Many people in their 20s find the suburbs socially boring and lifeless, and they desire to live in places where widely different cultures, races, lifestyles, modes of dress, music and food can thrive and be mutually supportive. Furthermore, the boundaries between living and working have blurred. Young people no longer lounge in front the television, but hang out in coffee shops a mere stone’s throw from their apartment.

True cities have always been dense, as well as diverse. They offer a concentration of infrastructure, resources, choices and jobs, as well as a variety housing types.

But many economically hot cities like Seattle, Portland, San Francisco, Denver and Austin have seen whole neighborhoods change rapidly. There has been a sudden, large shift in scale with building stock that had been one or two stories being replaced with new buildings that are five to seven stories or taller. That is a big leap in a short period of time. Lots of folks have a hard time accommodating to new things happening around them.

Change is hard, but some forms of increased density are harder to handle than others. Watching a block flip from being occupied by a bunch of cottages and miscellaneous commercial buildings to large, long boxes that fill the zoning envelope — and the eye — entirely along a block face can be dismaying. Like an invasion of sorts. At times, it even seems like you can’t get away from it all. Drive or walk down one street filled with cranes and stacks of framing and turn a corner, and the next one is going through the same dramatic change.

A number of years ago, I heard Liz Dunn, a wonderfully astute local developer, suggest that no new building should occupy more than a quarter of a block. Anything more than that is just too much. Too big. Too repetitive. Too monolithic.

Moreover, her thesis was that even if someone did a bad design, it would only have a relatively small visual impact. Initially, I thought this was a pretty radical idea.

I have since wondered: Could a city actually adopt a maximum development size, just as they do with maximum building height, maximum floor area, and other standards that govern development? To my knowledge, no city in the U.S. has tried doing that, even though I believe such a law could be crafted to be legally defensible.

Portland – faced with the same scale shift – is contemplating offering inducements to encourage new projects to be smaller. More modest projects would be exempt from the design review process and avoid the time, costs, and fees involved with that. It remains to be seen if developers will take the bait.

We can get a glimpse of what smaller scale, incremental development might look like on the block bounded by Harvard and Bolyston avenues to the east and west and between East Pike and Pine streets. On that block just south of Seattle Central College, new development is side by side with older buildings. No single project occupies more than a quarter of a block. There is variety, smaller-scale additions, and changes in character as you walk around it.

One building, by Hewitt Architects, deftly incorporates the masonry facade of a previous building and has the same tenant still occupying the corner. (The saving of older facades has been decried by other observers, including some in Crosscut. To that criticism I say, “So, you prefer they all be demolished then?”) Fortunately, the architects here carefully respected the proportions and details of the older structure, folding it into the new work rather than bluntly grafting it on, like the project a few blocks to the west where Bauhaus used to be.

Another building on the Harvard site, by Weber Thompson architects, added an internal public courtyard that brings light and landscaping into the center of the block. The new structure is jogged by other buildings, like an interlocking wood block puzzle. It nicely frames the recessed, curving front of the former car dealership. The public space, although not yet finished, seems a tad clunky in its detailing, but should end up being a pleasant forecourt. Portions of the ground floor have artfully designed metal screens that conceal points of vehicular entry and exit.

There is an older classic, apartment structure with bay windows on the block that might remain, given that its lot is small. And the immensely popular Linda’s Tavern is still on the Pine Street side. Along with the bodega next door, it could, of course, be redeveloped. But it would be a bit more difficult and the result would be smallish in size. Hopefully, the building at the corner of Harvard and Pike will soon be mercifully put out of its misery, following a long, slow decline.

Done by different developers and designers, this block serves to demonstrate that smaller can be better. The result is dense, urbane, layered with patina, and it caters to many different people. That is the best form of urban development one can hope for.