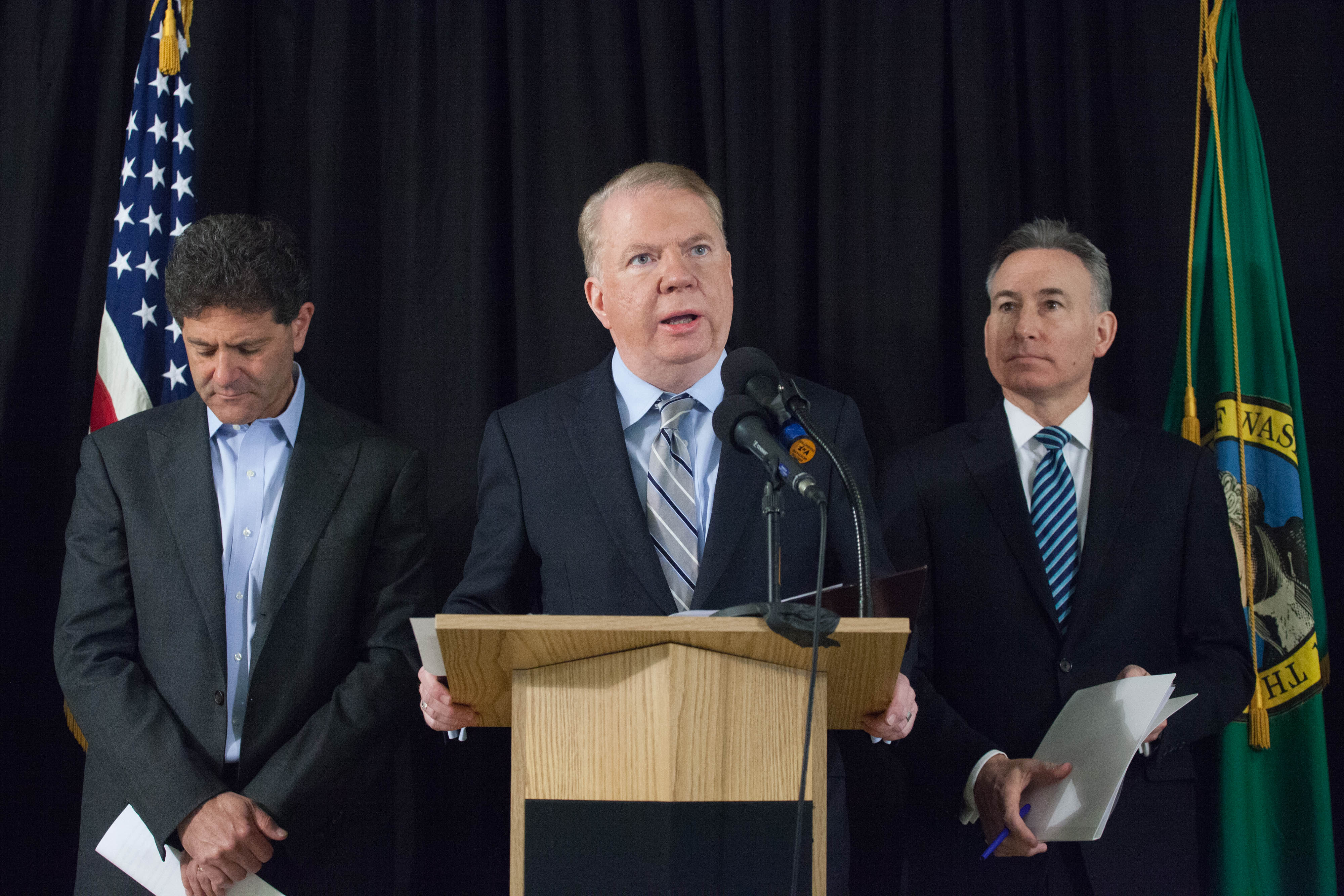 Mayor Ed Murray, center, talks about a sales tax increase to help the homeless. Nick Hanauer, on the left, and County Executive Dow Constantine joined Murray at a press conference.

Mayor Ed Murray has unveiled a change of plans for raising money to combat homelessness. Instead of asking voters to approve a $275 million property tax levy this year, as he had previously promised, Seattle will partner with King County to run a 2018 ballot measure to raise regional sales taxes by .1 percent.

As elected officials and service providers promise, the new proposal will indeed be “bigger and bolder” as well as regional: Between 2018 and 2027 it would raise more than $800 million, according to King County estimates.

The average burden would be about $30 a year per person, officials said.

At a press conference Monday at the Plymouth Housing Group offices in Belltown, Murray said enthusiasm for the original property tax hike was palpable and that in two weeks the proposal had already gathered 30,000 signatures.

But, he said, “Homelessness is an emergency not contained in Seattle. The crisis is not bound by artificial borders and our compassion cannot be restricted to political borders.”

Daniel Malone, head of the Downtown Emergency Service Center, said a countywide approach will be better. “It’s bigger and bolder and more regional and still has the same key emphasis, which is to house people,” he said at the Plymouth event.

Homelessness is rampant locally. Although there are not yet 2017 numbers for how many people are unsheltered in King County, most working on the issue expect it will rise again, as it has each year over the last several. In 2016, there were 4,505 people living on the streets in King County.

Murray has touted his decision last year to bring in an outside consultant, Barbara Poppe, to appraise Seattle’s response to homelessness. The results of that analysis have led the city to rethink its approach to homelessness, focusing on getting people into private market housing more quickly with the help of vouchers.

While Poppe concluded in her audit that Seattle could function more efficiently, Murray has maintained it will also require more resources to implement the changes she suggested. The election of President Donald Trump has spurred the city and, now, the county into asking for more funds.

The previous property tax proposal would have raised $55 million a year over five years, a near doubling of the city’s current budget to combat homelessness.

The campaign to support the property tax was funded by millionaire Nick Hanauer. The vast majority of that funding would have gone to new housing, with some money designated for behavioral and mental health as well as addiction treatment services.

The county did not release any specifics on how it would spend the money from the proposed sales tax. A task force will work over the coming months to draft more specifics.

While Hanauer was present Monday, he did not say whether he was funding the campaign. Technically, millionaire Hanauer would pay the same sales tax rate as the poorest King County resident, although he said he would end up paying more sales tax because he buys a lot more stuff.

It’s not entirely clear what changed since Feb. 21, when Murray first announced a Seattle-centric property tax measure, especially considering that he denied polling was an issue. Constantine was vague, saying only that the approach to homelessness should be more regional than just Seattle.

Sales tax is widely criticized as extremely regressive. For a city as progressive as Seattle, no one denied this was an issue, but supporters point out that that the options for King County and Seattle are limited because Washington does not have an income tax and property tax increases are limited to 1 percent per year without voter approval. “Washington state doesn’t have progressive taxes,” said Murray. “There’s just no way around it.”

As to why it made more sense to do a sales tax rather than ask voters for more property tax, that was also left vague.

Murray spokesperson Benton Strong suggested that part of the reasoning was, under state law, King County is authorized to ask voters for a .1 percent sales tax increase every year. If it doesn’t, that authority does not roll over — use it or lose it.

For 2017, Constantine has proposed a similar .1 percent sales tax hike to fund the arts.

With regional growth, a sales tax is also likely to expand more proportionally than a property tax.