Amid calls to resign, Murray is resolute but isolated 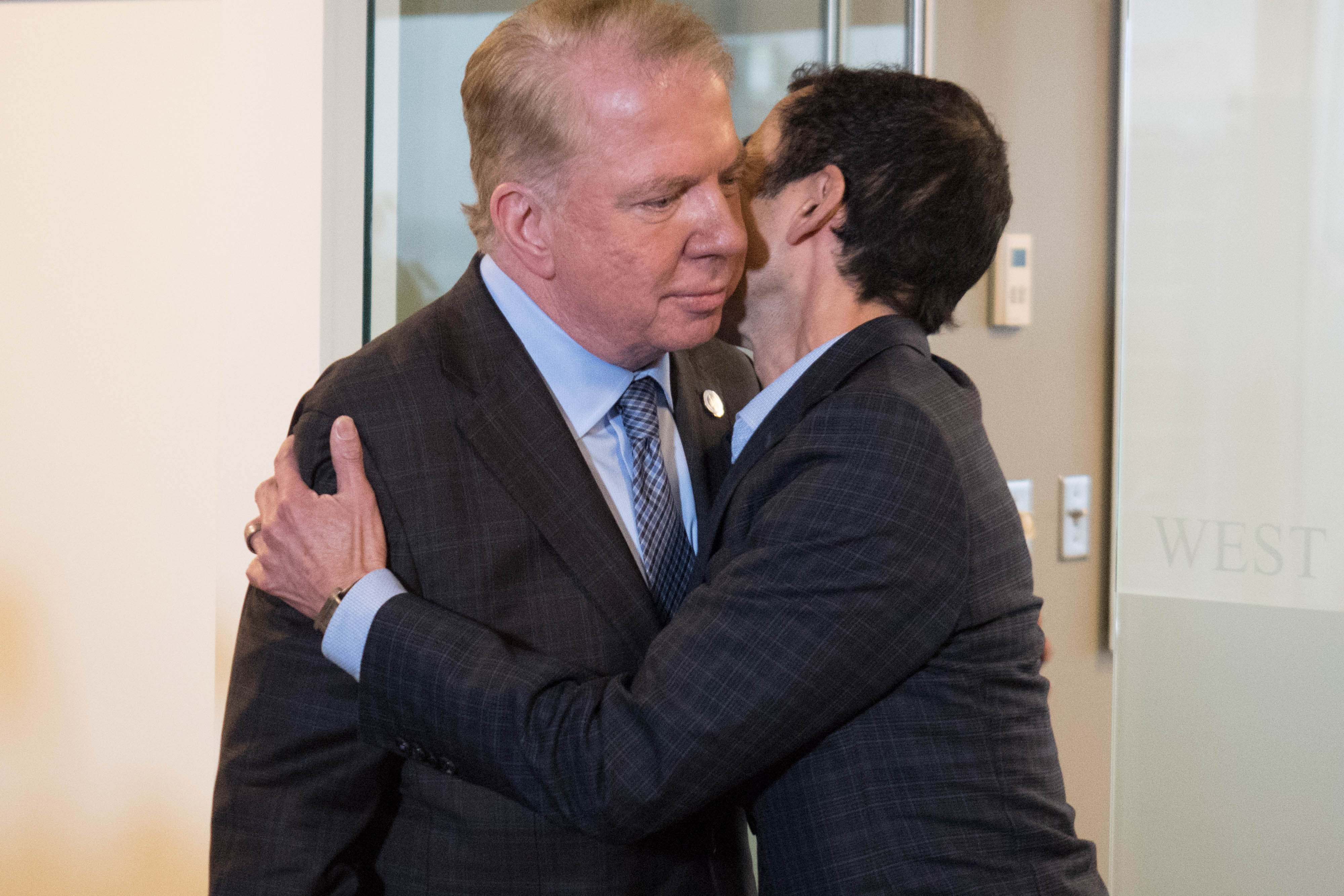 In a room much smaller than his office in City Hall, Mayor Ed Murray stepped up to a plain podium lacking the seal of Seattle usually displayed at any press conference and denied he abused children in the 1980s.

The mayor — known statewide as a gay-rights hero, nationally as a thorn in President Trump’s side — promised last Friday he would not back down, would not resign and would continue to seek a second term.

When he finished, he met his husband in a brief embrace and walked down the hall to a conference room that was not his own. He apparently sat there for more than an hour as his lawyer Robert Sulkin returned to other business.

Days before, the mayor was seizing the national spotlight with a suit against the Trump administration over its threats to sanctuary cities. Friday, as reporters filed stories in the law office lobby about whether he could possibly survive, Murray sat quietly with his husband, Michael Shiosaki.

Before the Friday afternoon press conference, Murray had been largely absent from his 7th floor City Hall office the day after the Seattle Times released the allegations. When he was there, he met with political advisers past and present, including for three hours with his former communications director, Viet Shelton, who left the mayor's office last summer for a job at Microsoft.

City officials, meanwhile, worked to keep the ship righted — his staff, including current Communications Director Benton Strong, are less involved in the mayor’s crisis management, turning it over instead to the mayor’s longtime loyalists, including Shelton, consultant Sandeep Kaushik and another former communications director, Jeff Reading.

Despite the finality in Murray’s tone Friday that he would not step down, conversations about his political future continued into the weekend, according to four people who were told of the meetings. In the mayor’s Capitol Hill home, his advisers continued to mull the resignation question.

But according to one person familiar with the mayor’s state of mind, who wished to remain anonymous to comment on a tense political situation, Murray has been remarkably calm. “Anecdotally, I think that he’s setting the tone for this and his tone is: This is untrue,” the person said. It was apparently the mayor’s own initiative to visit the doctor and have his private areas examined, allowing for Tuesday's stunning and awkward press event where Murray's attorney, Robert Sulkin, suggested that the plaintiff drop his suit against Murray.

The source said of Murray, “He’s not going anywhere."

But if the mayor is resolute, others question whether the network surrounding him will remain as committed.

Murray is known for ruling with an iron fist. Dating to his years in the Legislature beginning in the 1990s, his temper is legendary, even toward people considered his allies. City Councilmember Sally Bagshaw, a key ally, received a barrage of angry text messages last year when she didn’t throw her support behind Murray’s plan for a homeless encampment. Chamber of Commerce head Maud Daudon told staff last year she was thrown out of his office for disagreeing with a funding proposal. Forty-four people have left positions on his staff since he took office, a near 100 percent turnover. Murray has painted his office as a jumping-off point for talented people looking to move to bigger things, but others have wondered if a high-stress work atmosphere drives people away.

In the hours and days after the accusations dropped, reaction was muted. Almost the entire Seattle City Council took cover behind a blanket "no comment" from Council President Bruce Harrell, apparently anxious to move from shock back to normal business. (“I’ve never seen the stages of grief go by so quickly,” said one person inside council chambers.) Only Councilmember Kshama Sawant has spoken publicly, although not on Murray specifically, but the broader issue of sexual abuse.

While the silence is understandable, it’s also notable. If there’s one thing everyone agrees on, political survival for Murray will not be easy. The allegations already follow him everywhere: His social media presence is newly racked with calls to resign. At a city council meeting Tuesday, one commenter demanded he step down. On Wednesday afternoon, the Seattle Times editorial board called on the mayor to drop his re-election bid, allowing him to focus on "supporting several of his noteworthy policies" until the end of the year, when his term ends.

Nevertheless, the mayor issued a statement Wednesday saying, again, he would not back down.

As this snowballs, say politically connected Seattleites, he will need a network of support to remain in office and continue his re-election campaign. And while he has support from a group of committed advisers, others wonder how deep that network will run now that the mayor is vulnerable and perhaps not as feared.

“I don’t know anyone he hasn’t yelled at,” said another person deeply involved in Seattle politics. How eager, wondered this person, will those people be to come to his side?

Tina Podlodowski, head of the state Democratic Party and a former Murray employee and former council member, says of the path forward, “You have to be extraordinarily tough and your team has to be tightly knit.”

But when asked if Murray’s temper may have driven people away, she demurs. “I think that everyone is going to have to make that decision for themselves,” she says. “I like to think his temper is there because he’s passionate. The flip side [of temper] is sometimes you’re impatient and you want to move things quickly.”

Another politically connected person was less equivocal: “Loyalty [to the mayor] is not out of love, but fear.”

Information from the medical exam that seems to contradict statements in the lawsuit against him may now swing momentum back in his direction and give political opponents pause. And he’s made a clear effort to make public appearances this week, tweeting a photo of himself at a naturalization ceremony, at a baseball game, in a meeting.

Legally, it's unclear how public his case will remain. Lincoln Beauregard, the lawyer for the mayor’s accuser, is anxious to move quickly with a deposition. Whether the public will have access to that will be up to the judge, says Seattle attorney Mike Pfau, who has brought hundreds of sex abuse cases.

Meanwhile, Murray’s attorney Sulkin is clearly on the offensive, which could be read as him preparing for a long fight, in which the mayor would hope for unequivocal legal victory, or him laying the groundwork for a settlement that cannot — in any way — be spun as admission of guilt. He did not rule out settlement Tuesday, but didn’t hint which direction they were leaning.

But, as Sulkin said last week, you can't put these feathers back in the pillow.

Already, the hesitation to challenge Murray out of fear appears to be evaporating: As the May 19 filing deadline approaches, the list of rumored challengers to the mayor grows longer every day. The mayor may be committed to his office, but suddenly there are cracks in the veneer of political strength and power he's built up over his two decades-plus political career.