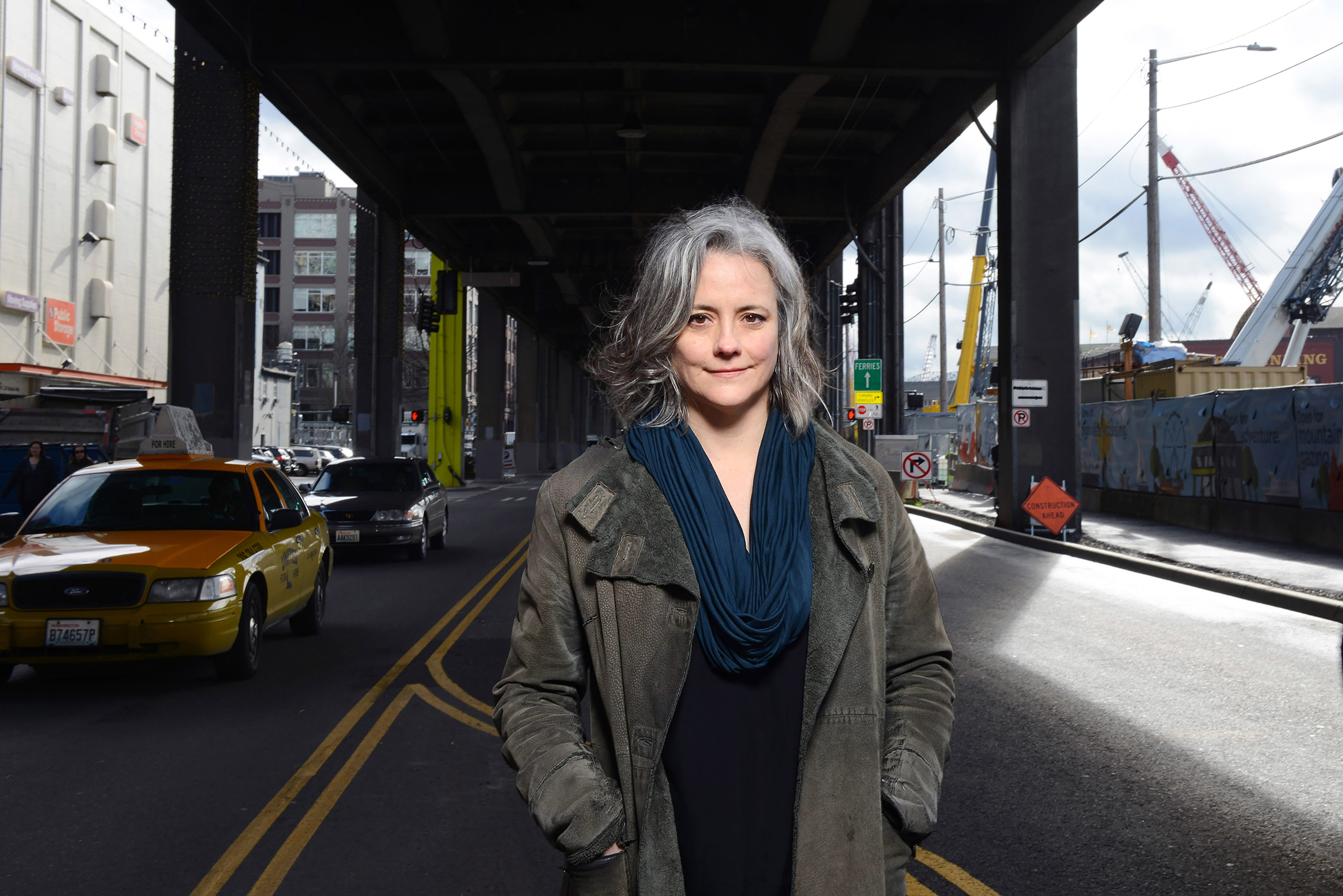 Activist and urban designer Cary Moon, photographed on the Seattle waterfront in 2015.
(Photo by Daniel Berman)

Cary Moon made her name advocating for a tunnel-free waterfront. Now, she’s running for mayor of Seattle.

As Seattle was considering how to replace the damaged viaduct, Moon became a fierce tunnel opponent and advocate for some combination of surface streets and transit. Elected officials were largely debating whether to build a new underground or elevated highway. In response, Moon formed the People's Waterfront Coalition. “[The People’s Waterfront Coalition] had formed to say, wait a minute, why are we even assuming it has to be a highway?” she told Grist in 2010. “We did a lot of research on what was going on in other cities and brought all these case studies of giant urban highways that had been torn down – and the traffic impacts were better without the highway than with it. It’s counterintuitive, but it works.”

Ironically, she had a strong ally in then-Mayor Mike McGinn, who to this day argues the surface street/transit approach would have been a better approach. Now, she must compete against him, along with Mayor Ed Murray, attorney Nikkita Oliver, transit-wonk Andres Salomon and six other candidates who are running for mayor.

Ignoring Murray’s “legal problem,” as McGinn put it, the high housing costs of Seattle will likely be the most discussed and debated issue of the campaign. For one, it’s all anyone talks about. But it’s also where there seems to be the most daylight between candidates.

On this, Moon will bring a new dynamic.

Moon has a background in engineering and landscape architecture, with a tilt toward advocacy. She has a detailed and wonky perspective on addressing Seattle’s housing needs that does not fit neatly into the competing pro-development/NIMBY binary trotted out so often in the public sphere. With writer Charles Mudede at The Stranger, she published a four-part series last year that largely steered clear of the debate around density, focusing instead on the influence of outside money and the financial sector on housing costs. The Big Short, the movie about men betting against the housing market in 2008, appears to be a favorite of hers and Mudede’s.

"If you look at what’s causing price escalation, it’s not just our growth," Moon said in an interview Wednesday. "Growth is good. People are moving here for healthy, good reasons. Everyone should feel welcome, everyone belongs here."

"That’s not the problem. The problem is when people see growth happening, outside forces come in and prey on that."

The extent of outside investors' influence on local housing prices is unclear, as is what's within the city's power to do about it under state law. But Moon thinks it's worth exploring options. She throws out potential taxes on corporate and non-resident homeowners, third or fourth homes, vacant properties and luxury homes.

"We need to figure out what’s legal here, build political will and use that revenue we generate to plow back into affordable housing," she said.

Like McGinn who just entered the race, Moon will surely face questions about whether she’s taking advantage of Murray’s wounded reputation.

Clearly cognizant of this, her campaign consultants, Moxie Media, sent around an email the day the Murray story broke to say their candidate — whom they didn’t name until Wednesday — had been considering a run for some time.

The mystery of this so-called “Moxie candidate” fueled speculation about who it is, with names like state Democratic Party leader Tina Podlodowski, former U.S. Attorney Jenny Durkan, Port Commissioner Courtney Gregoire and former Department of the Interior Secretary Sally Jewell as well others being floated about.

Moon is perhaps not who many suspected, mostly because she will have significant work to do to get her name out there. And facing incumbent Murray, who’s flush with cash; a former mayor in McGinn; and a community hero in Oliver, Moon has a steady uphill climb to battle before the August primary.

This story was updated at 12:00 PM with comments from Moon.