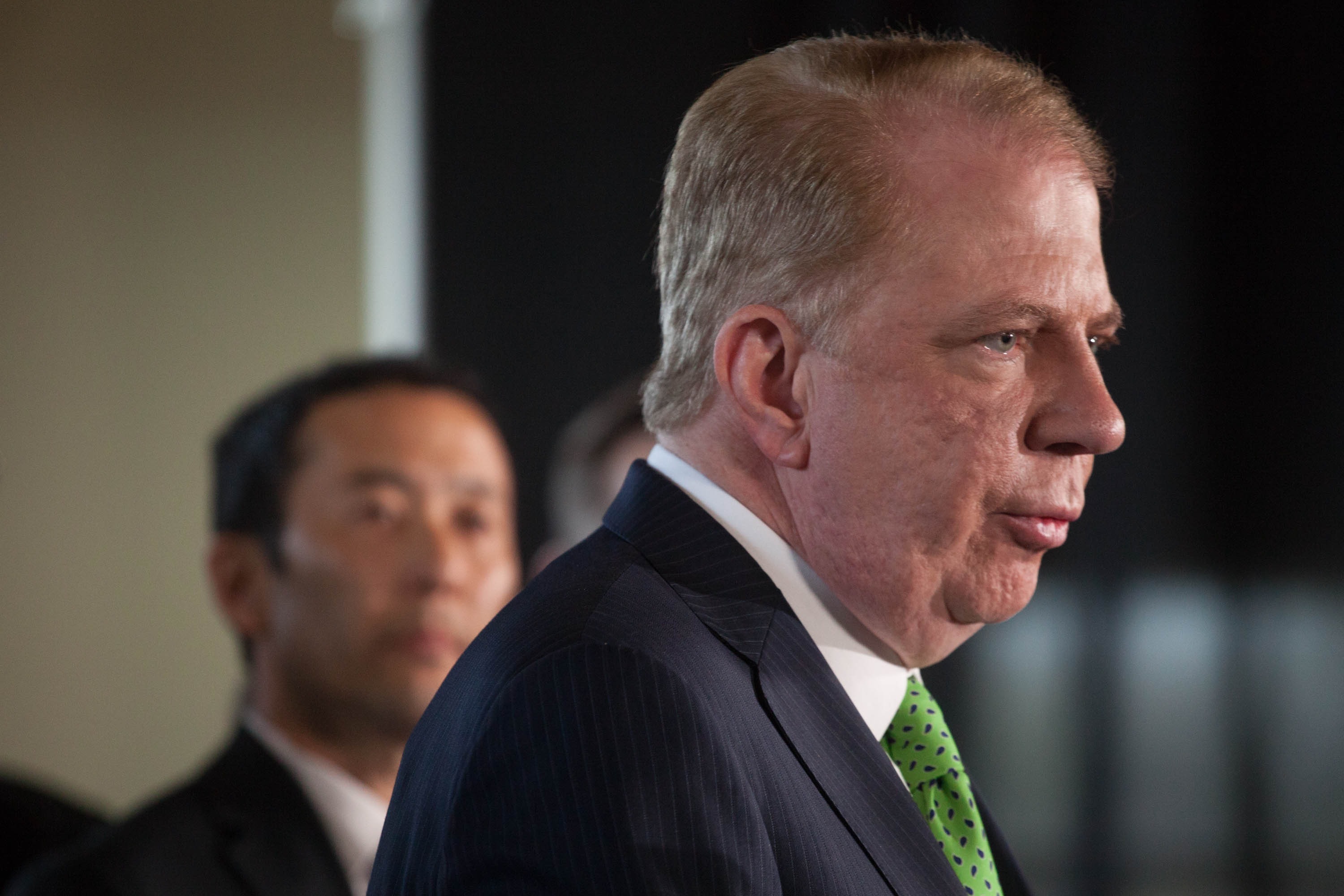 Seattle Mayor Ed Murray announced Tuesday he will not seek a second term next fall, a stunning turnaround from last month, when he was poised to stroll to an easy re-election.

In an emotional announcement, describing himself as a poor kid from West Seattle who had never heard the word gay growing up, Murray said as mayor of Seattle he had "the best political job in politics." But allegations that he had sexually abused children, which hurled him into the biggest local political scandal in recent memory, have "hurt me and is hurting this city. It hurts those who are victims of abuse. It hurts my family. It hurts Michael [Shiosaki, his husband]," Murray said.

For those reasons, Murray, flanked by dozens of supporters, announced he was withdrawing from the campaign.

“It tears me to pieces to step away but I believe it is in the best interest of our city," he said.

Murray’s announcement, made at the Alki Beach Bathhouse, marks a brutal end to what has been a decorated career in public office. Through his time in the state Legislature and as Seattle’s first openly gay mayor, Murray has been regarded as a champion for gay rights and recently, as an emerging national foil to President Donald Trump.

But a lawsuit in April accused him of sexually abusing children in the 1980s. The allegation was followed by accusations from three other men. Murray has denied any wrongdoing, but statements he made about his accusers’ criminal pasts led to him being pilloried by the media. Longtime supporters on the Seattle City Council — with the exception of Councilmember Sally Bagshaw — never rushed to his support. And some of his allies in the city’s LGBTQ community, including the executive director of the Gender Justice League, Danni Askini, and onetime Council candidate Michael Maddux, suggested that he step down.

In the weeks since The Seattle Times reported the accusations made by Delvonn Heckard, 46, alleging Murray repeatedly raped him as a teen when paying for sex, the mayor has lived up to his reputation as a stubborn and ambitious leader, resisting suggestions even among his closest advisors that he consider resigning. Publicly, he has been resolute that the scandal would not derail him: “I have never backed down,” he said in his first public appearance after the story broke. “And I will not back down now. I will continue to be mayor of this city and I will continue to run for re-election.”

Still, Murray suddenly seemed politically vulnerable. Former Seattle Mayor Mike McGinn surprised Seattle by jumping into the mayoral race shortly after the accusations became public. McGinn has not said that the lawsuit triggered his campaign, but said he took stock of the landscape, and his staff acknowledged they cobbled together a re-election kickoff more quickly than normal.

Murray’s campaign fended off whispers that he was done, announcing campaign endorsements, but polling numbers indicated that the mayor’s political career was endangered.

Murray has been a staple of Washington and Seattle politics since the late '80s, when he served as campaign manager to Washington’s first openly gay legislator, Cal Anderson. After filling Anderson’s vacated seat, Murray served in the Washington State House of Representatives from 1995 to 2006 before winning election to the Senate in 2007. He served there until 2013, when he defeated then-incumbent McGinn for mayor.

His term has been one of intense ups and downs: Under his watch, the city carved a path toward a $15 minimum wage and, for the first time, struck a deal to mandate private developers contribute to affordable housing.

But Murray’s efforts to walk a tightrope between the right and the left has often led to dissatisfaction from both camps. Constituents have accused him of being either too aggressive or too lenient on housing, homelessness and police reform, to name just a few issues.

In advance of his Tuesday announcement, the mayor's office called a 9 a.m. all-staff meeting as well as a 9:15 a.m. meeting with cabinet heads, according to a scheduling announcement provided to Crosscut. One by one, heads of the departments of transportation, human services, economic development, parks, civil rights, police and others filed through the front doors of City Hall to take the elevator to the seventh floor. The meeting was scheduled to last two and a half hours.

With Murray’s exit comes questions about his long-term initiatives, many of which were clearly structured on the assumption that he’d have more time. Those initiatives include his Pathways Home model for reshaping the city’s response to homelessness, his housing agenda and the reshaping of Seattle Center and the arena.

Now the fate of those efforts rests in the hands of our next mayor, who will be elected in November.

Two of his contenders for mayor, Cary Moon and former-mayor Mike McGinn called on Murray to go further and resign.

"In order to focus on the future, for the sake of survivors & the city, I feel @MayorEdMurray should resign," McGinn wrote in a tweet.

In a statement, Moon said, "I believe it's in the best interests of everyone - especially the many survivors of sexual assault re-experiencing their own traumas- for the Mayor to step down now so that City Hall can get back to work."

Attorney and candidate Nikkita Oliver didn't go so far as to call on Murray to step down. "We respect his right to due process regarding the allegations made against him," she said in a statement posted to Facebook. "However, we hope this announcement does not become a reason to stop talking about vulnerable youth and homeless youth. The bigger conversation cannot go away."

Speaking after Murray’s announcement, Seattle Police Chief Kathleen O’Toole, who was arguably the mayor’s most significant hire, said she appreciated the mayor’s decision to withdraw from the campaign. “It’s been a distraction to the community,” she said. “I’m sure it was a very personal decision for the mayor and [Murray’s husband] Michael [Shiosaki]. But we’ll move on.”

“I think he’s putting the city and the city departments before himself and I appreciate that,” she added.

At his press conference, Murray noted all that had been accomplished under his tenure including police reform, affordable housing, gender equity, a utility discount program, an office of Immigrant and Refugee Affairs. It has been "an opportunity of a lifetime," he said about his mayoral career.

Many of his supporters were in tears. He concluded his announcement quoting the late Sen. Daniel Patrick Moynihan: "To be Irish is to know in the end that the world will break your heart."

Murray added, before exiting stage left, "We thought we had a little more time."