Why Seattle will never be a walkable city 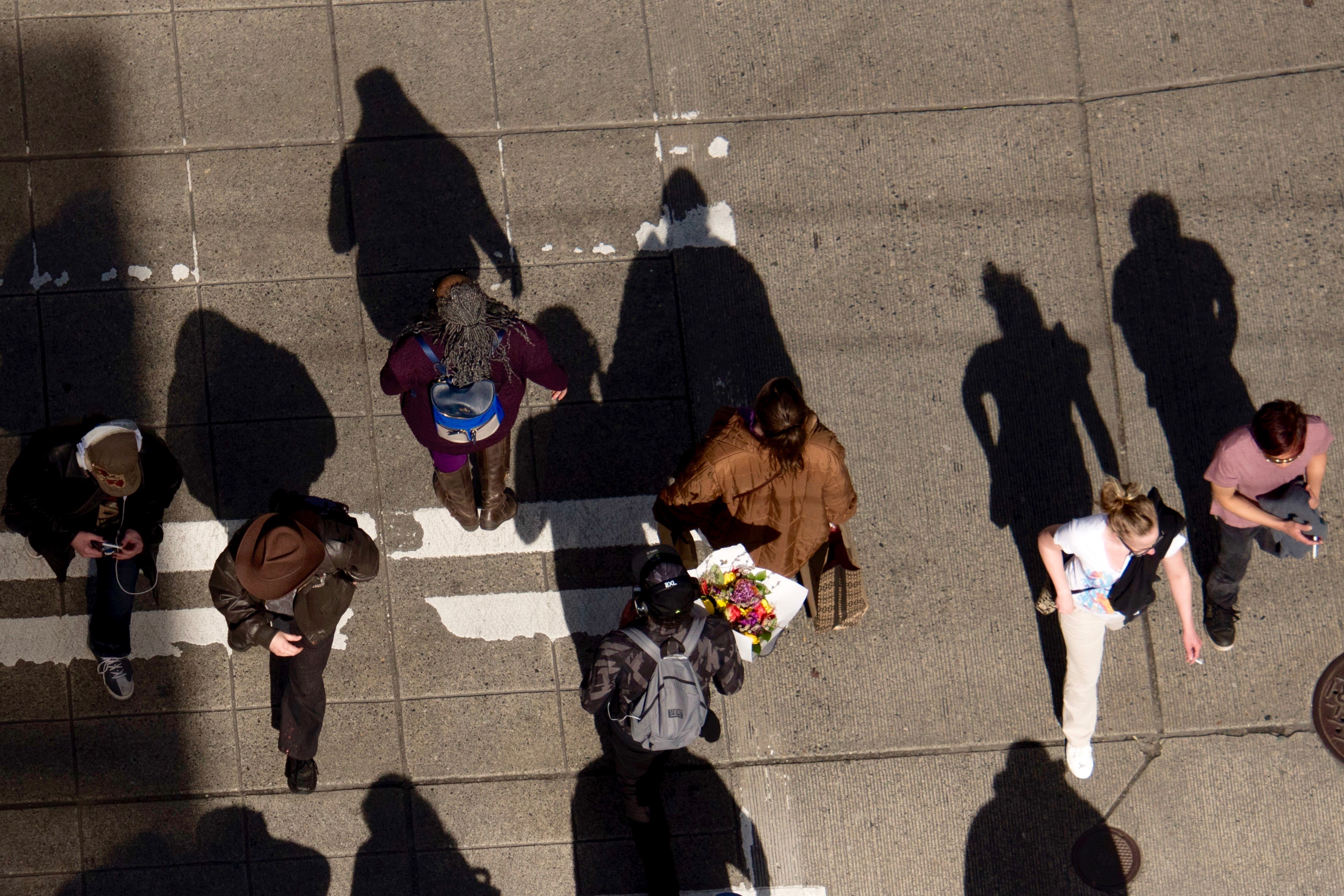 A crowd of pedestrians cross a downtown sidewalk — where the markings are wearing off.

People who walk regularly around Seattle are torn between bafflement and dismay at what they traverse on foot. On any given day, they encounter buckled, battered and sometimes closed sidewalks; broken curbs; faded or entirely unpainted crosswalks; and crumbling stairways.

Seattle is one of the richest cities in America. We are in the midst of the biggest boom since the Klondike Gold Rush, with developers pouring money into construction and residents’ property taxes climbing. How have we come to expect and accept so little?

Civic leaders talk about making Seattle a walkable city, but a full-on surge in walking is already upon us, and it's building every year, despite the deplorable conditions. The Seattle Department of Transportation (SDOT) notes that walking is by percentage Seattle’s fastest growing share of the transportation modes. The number of people walking to work increased by 60 percent from 2009 to 2015. In Columbia City, some 65 percent of people visiting the business district get there by walking. Daily observation on the streets and sidewalks confirm statistics showing rapid growth in walking downtown.

To accomodate this walking boom, SDOT has written a big Pedestrian Master Plan to replace a largely unconsummated 2009 plan. SDOT advertises its plan, which is under review by the city council, as a 20-year blueprint to make Seattle the nation’s most walkable and accessible city. But help for walkers is not on the way.

The new plan actually sets the city’s course downward and backward. We'll see more years of inadequate maintenance while what we already have continues to fall apart. There is no vision for investing in areas where a combination of denser housing and job growth will further fuel the walking boom. There are no specific timetables for steps to relieve our epidemic of pedestrians being hit by cars.

Those we employ and elect should be, but are not, charting a path to the kind of city that pedestrians deserve.

Here are some of the ways in which the city's new plan mishandles pedestrian needs:

Seattle's network of sidewalks, marked crosswalks, curbs and curb ramps has a replacement value of $5.5 billion — more than a billion dollars above the value of all of SDOT’s bridges. But SDOT’s skimpy spending for ordinary maintenance on the existing pedestrian system hovers well under $2 million annually, or less than the department’s estimated cost to build just seven blocks of new sidewalk.

Shortchanged maintenance is made even worse by having to fork more and more of the maintenance budget into emergency repairs of a decaying system. The Move Seattle levy allocates only enough money to repair perhaps 6 percent of sidewalks over its nine-year course. According to a 2015 review by SDOT, the city might need 10 times what has been built into the levy just to forestall further deterioration of the existing system.

Move Seattle stipulates just $4 million over nine years for re-marking crosswalks. In 2016, SDOT marked 835 of its 5,500 crosswalks — the best in nearly a decade. But that was starting from a catch-up backlog of many hundreds, even thousands, of faded and often vanished crosswalks, many at high traffic intersections. And even if the city keeps up last year’s pace, it won’t come close to the four-year remarking cycle promised in the 2015 campaign for Move Seattle levy.

Pedestrians’ impression: The system is falling apart beneath their feet. Astonishingly, citizen intuition has been the only measure of exactly how bad the situation has been allowed to get. SDOT has only scanty records, and those a decade old, of any systematic appraisal of actual sidewalk conditions. In its 2015 asset report, SDOT simply demurred that the actual condition of 70 percent of its sidewalks, curb ramps and the like was unknown. That startled even the City Council. So the council last year bestowed $400,000 on SDOT to thoroughly collect block-by-block sidewalk data in 2017.

The data will become available later this year, too late to inform the 20-year blueprint before the council. Today no one has any idea what it would cost to bring even fractions of the system up to snuff. Shouldn’t the council push the pause button so the plan can be connected to the critical data the council itself requested?

Why didn't SDOT focus its new plan chiefly on fixing the sorry current state of affairs? That is because there lurks another problem: the big unhappiness in neighborhoods with no sidewalks. That constitutes a much noisier political issue than crumbling sidewalks. A quarter of Seattle’s blocks have no sidewalks. That’s 1,800 blocks on arterials, many with constant pedestrian use, and 10,000 blocks on non-arterials.

But here, too, the plan fails us. It touts a priority of filling in a third of the gap, about 3,700 blocks, for a very rough estimated cost of $600 million or more. Compare that to Move Seattle, which proposes to spend $61 million and build 250 new blocks of sidewalks. The notion that they are going to accelerate the construction so rapidly in the 11 years after Move Seattle is absurd.

The discrepancy isn’t within some margin of rounding error. It’s the utter disconnect between plan and reality. No wonder that SDOT’s plan actually footnotes: “Implementing pedestrian improvements ... in the [plan] will take major funding and many years of construction and will likely extend beyond the Plan’s horizon” of 20 years. In other words, grand blueprints with no expectation of how to pay for the work.

What about the pedestrian dimensions of Seattle’s exploding growth? Meticulously mapped urban centers (like Downtown and South Lake Union) and two dozen urban villages (like North Beacon Hill and West Seattle Junction), show where the Seattle 2035 comprehensive plan strives to concentrate the city’s new jobs and housing. Over the next 20 years, the city anticipates adding 70,000 new housing units, 59,000 of which will be in these areas.

For urban centers and urban villages, walkability, accessibility and quality pedestrian infrastructure are supposed to be cornerstones of the city’s growth policy. But neither the mapped outlines of urban centers and urban villages, nor the 16 percent of the city’s land area now proposed for upzoning, made it into the plan’s geographic framework for prioritized pedestrian investment. Should there not be, at a minimum, some kind of data projection of where and by how much Seattle’s pedestrian activity will grow over the next five to 20 years?

The growth outlook is not the only thundering silence in the new plan. It also skips over the city attorneys’s work on settling a federal class action lawsuit over the widespread failures of Seattle’s 27,000 existing curb ramps to meet the requirements of the Americans with Disabilities Act. Later this year, the veil will come off. We will learn how many thousands of curb ramps across the city — over how many years and how many tens, maybe hundreds, of millions of dollars — are going to have to be corrected so that Seattle will simply be accessible to all its citizens, in accordance with the law.

No one pretends today that the $30 million proposed spending in the nine-year Move Seattle levy aiming at curb ramps for 750 intersections is going to be nearly enough.

In the last five years, about 35 pedestrians have been killed by cars in Seattle, another 200 seriously injured. In Belltown, a pedestrian was run down by a pickup truck  and killed in a crosswalk last week. The trends are steady, not declining. Moreover, the risk of being a pedestrian-carnage victim is disproportionately high in Seattle for people over age 55.

But the plan offers no hierarchy among opportunities that would likely offer the biggest safety dividends, though that might seem to demand special urgency.

This much is sadly clear: SDOT’s new Pedestrian Master Plan has no serious claim to making Seattle the most walkable, accessible city in the nation. The plan simply reveals, by what it says and does not say, how Seattle’s pedestrians are gripped in deteriorating conditions and unsatisfactory trends.

The great loss is that it would be hugely worthwhile for Seattle to aim at being a much more decently walkable and accessible city than it is today.

That, however, requires earnestly engaging reality and the data. It means linking tangible goals directly to the city’s commendable urban center and urban village growth and housing policies. It means making hard choices to seize and advance strategies that will make the greatest positive differences. It means setting out schedules and responsibilities for action. And it means finding a bigger slice of the transportation dollar to make walking safer, more convenient and more useful for everyone trying to get around our city.