We pay taxes for better police training, but it's not being spent 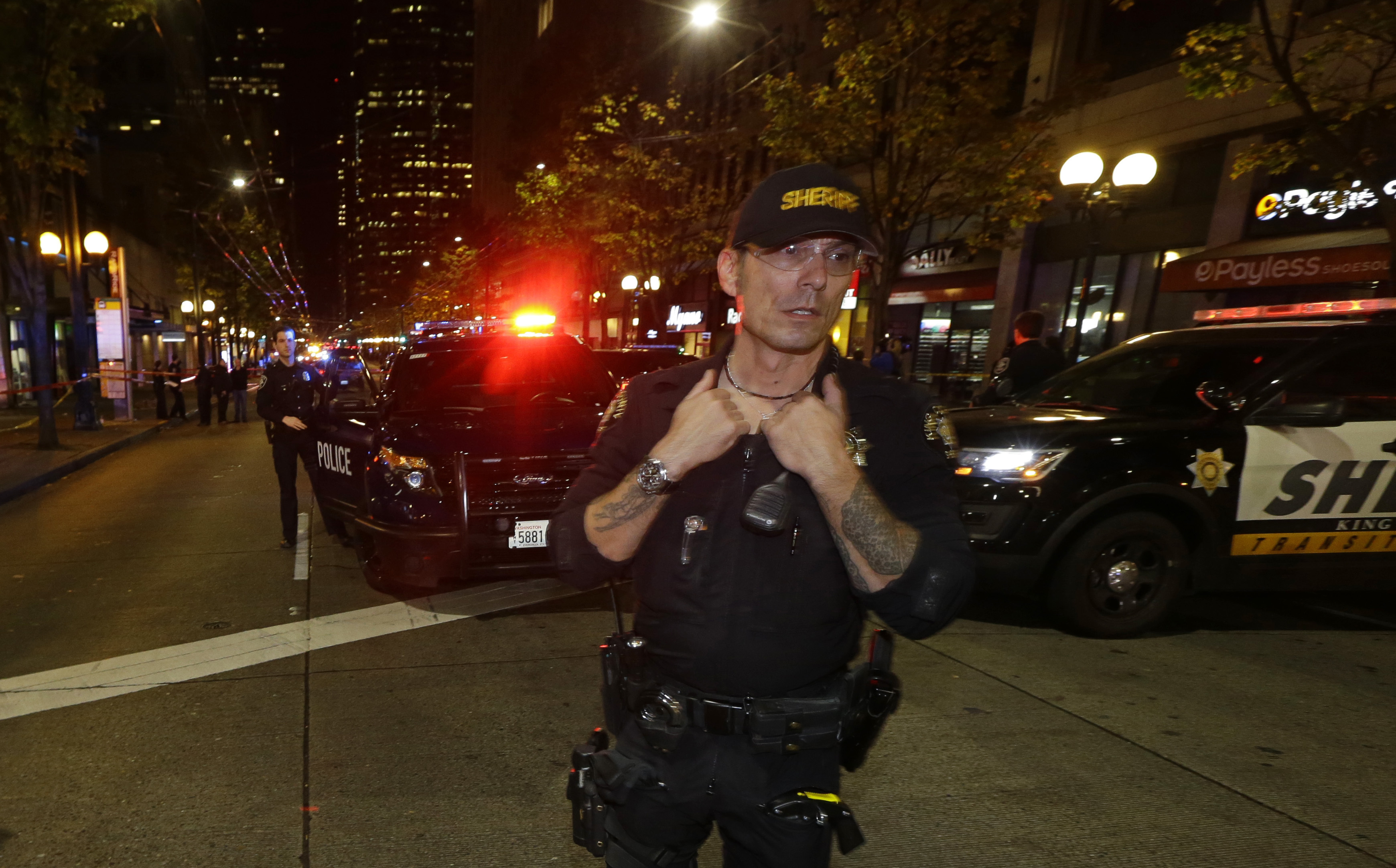 The two King County Sheriff's deputies who shot and killed 23-year-old Renee Davis during a welfare check last October had each received 8 hours of de-escalation training.

Neither officer, however, had taken an additional step of completing full Crisis Intervention Training, a 40-hour course that dives much deeper into understanding mental health issues and myriad behavioral health resources available to law enforcement officers.

Unlike the state-mandated 8-hour class, the 40-hour CIT course is not a requirement for the law enforcement agencies within King County. But there is money for it: The county earmarked $800,000 for CIT training in 2016.

Since 2005, King County residents have paid a one-tenth of one percent sales tax to fund mental health and drug dependency services, a portion of which is reserved specifically for crisis intervention training for first responders.

That extra money could have trained between 60 and 120 additional officers every year.

Answers to why the money isn't being spent depends on who you ask: There’s a bottleneck at the academy; not enough departments have expressed interest in taking the classes; coordinating schedules can be difficult.

But elected officials and the general public continue to demand more quality training for police officers. And when police shootings occur, the outcry to hold law enforcement officers accountable reaches a fever pitch.

Last Sunday, Seattle police officers Steven McNew and Jason Anderson responded to a call to a burglary in a Magnuson Park apartment complex. The department was aware that the caller, 30-year-old Charleena Lyles, had previous mental health struggles, and for that reason, sent two officers instead of just one. According to the department, McNew had completed a 40-hour CIT course and was considered to be a Crisis Intervention Specialist.

But when the encounter resulted in another police shooting, and Lyles' death, it once again forced the question into the public eye: Are our law enforcement officers getting the training they need to defuse violent, and potentially deadly situations?

The officers who responded to Renee Davis' house on the Muckleshoot Indian reservation in October were called by a boyfriend reporting Davis was suicidal. According to a Sheriff’s Office timeline of the shooting, the two deputies knocked on the door but received no answer. They were apparently concerned for Davis’ safety as well as the safety of her two children, so they entered the house. They found Davis inside, under a blanket. When she wouldn’t show her hands, the officers removed the blanket and saw a gun. She then allegedly pointed it at the officers and they fired, killing her.

King County Sheriff John Urquhart says he doesn't believe extra CIT training would have made any difference in Davis' case. "She’s in this room, she could be dead, she could be bleeding to death, she could have somebody else in there and they went in,” he says, sitting in his downtown office in an interview last week, before the Lyles shooting. “Unfortunately, she pulled a gun out and they had to shoot her.”

During the King County inquest into Davis’ death — a standard fact-finding court hearing following officer-involved shootings — her family’s lawyers argued the two officers did not do enough to de-escalate the situation. "When officers are doing a welfare check, the person they're doing the welfare check on shouldn't end up dead," Bree Black Horse, the attorney for Davis’ family, told the Stranger newspaper.

The inquest laid out a set of facts about the shooting. But for those looking for an explanation or an indictment, inquests can be dissatisfying. They tend to avoid questions of what should have happened in favor of simply establishing what did happen. As a result, there is still no definitive answer for whether the situation could have been avoided through more or better use of de-escalation and crisis intervention.

Despite Urquhart's insistence that more training would not have made a difference, he agrees 8 hours is not enough to prepare officers for handling crisis situations, especially in scenarios like Davis’, which, because it was on the Muckleshoot reservation, was farther away from backup or mental health resources than, say, downtown Seattle. He won’t say things could have ended differently, “But had this played out just a little bit differently, the crisis intervention training would have been exceedingly important.”

Urquhart says it's his ultimate goal to get all his patrol officers through the 40-hour course; currently, 275 of the department's more than 700 officers have completed the longer training.

“The reality is men in the white coats have been replaced by police officers. It’s just the way it is," Urquhart says. "We have to deal now so much [and] so often with people in mental crisis that it’s so important we know what to do and how to deal with certain situations.”

According to Amy Watson, an associate professor at the Jane Addams College of Social Work at the University of Illinois at Chicago, there isn’t much research on the difference between receiving 8 and 40 hours of training. But, she says, 40-hour courses teach officers to recognize signs of mental illness and how to connect with service providers.

“The other things that CIT trainings incorporate is they bring in family members and other people with lived experience,” she says.

“Providers and law enforcement don’t always like each other,” Watson says. Through the longer courses, “they get to develop those relationships. They do really need that experience of getting to know people. It helps anchor everything else.”

The King County Council first approved the Mental Illness and Drug Dependency (MIDD) sales tax in 2005. The council re-upped it last August, extending the tax through 2025.

According to Susan Schoeld, King County’s crisis diversion program manager, the MIDD tax covers the entire cost of the training, including overtime for attending officers and backfill to departments that need someone to cover for officers while they're in training.

Schoeld says the money couldn’t quite cover costs for every officer to attend the 40-hour course, but it could come close. “If all we were paying for was the training and the components of the training including instructors and facility … I think we could do some interesting things with a couple extra classes,” she says.

In recent years, the county has spent more of its CIT funding: It spent 83 percent of that money in 2016 compared to just 68 percent in 2011. But because the county still underspends, some worry that the CIT dollars will be trimmed in the future.

Tony Lockhart, CIT instructor at the Washington State Criminal Justice Training Commission in Tukwila, cites several challenges to getting that money spent. First, he says, is unpredictable scheduling. It can also be difficult to forecast spending because not all departments ask for reimbursement from the county to pay for an officer to cover for a colleague away at training. "It's really just a roller coaster based on what’s being paid out by class," he says.

There are 12 longer CIT classes offered each year. Lockhart says they're often full and wishes they could add more on the fly. But instructors need significant advance notification, so last-minute classes are nearly impossible to schedule.

Schoeld, however, says that in the past, classes haven't always filled, a product of not enough officers signing up. Part of her work is to get the word out to departments that this money is available. If departments really do jump at the opportunity, she says, the county could accommodate. "If we see an uptick in need for 40-hour classes, we would address as needed," she says.

Some have questioned whether it makes sense for every officer to go through the longer CIT training, which earns them the title of Crisis Intervention Specialist. "Some people are just not very good at it," says Schoeld, and departments don't want to assume that all CIT officers are equally capable.

But Lockhart doesn't buy that. "The reality is, there’s not a lot of downside for the 40-hour," says Lockhart. "Even if I’ve got someone who just doesn’t get it, at a minimum they’re still learning about resources."