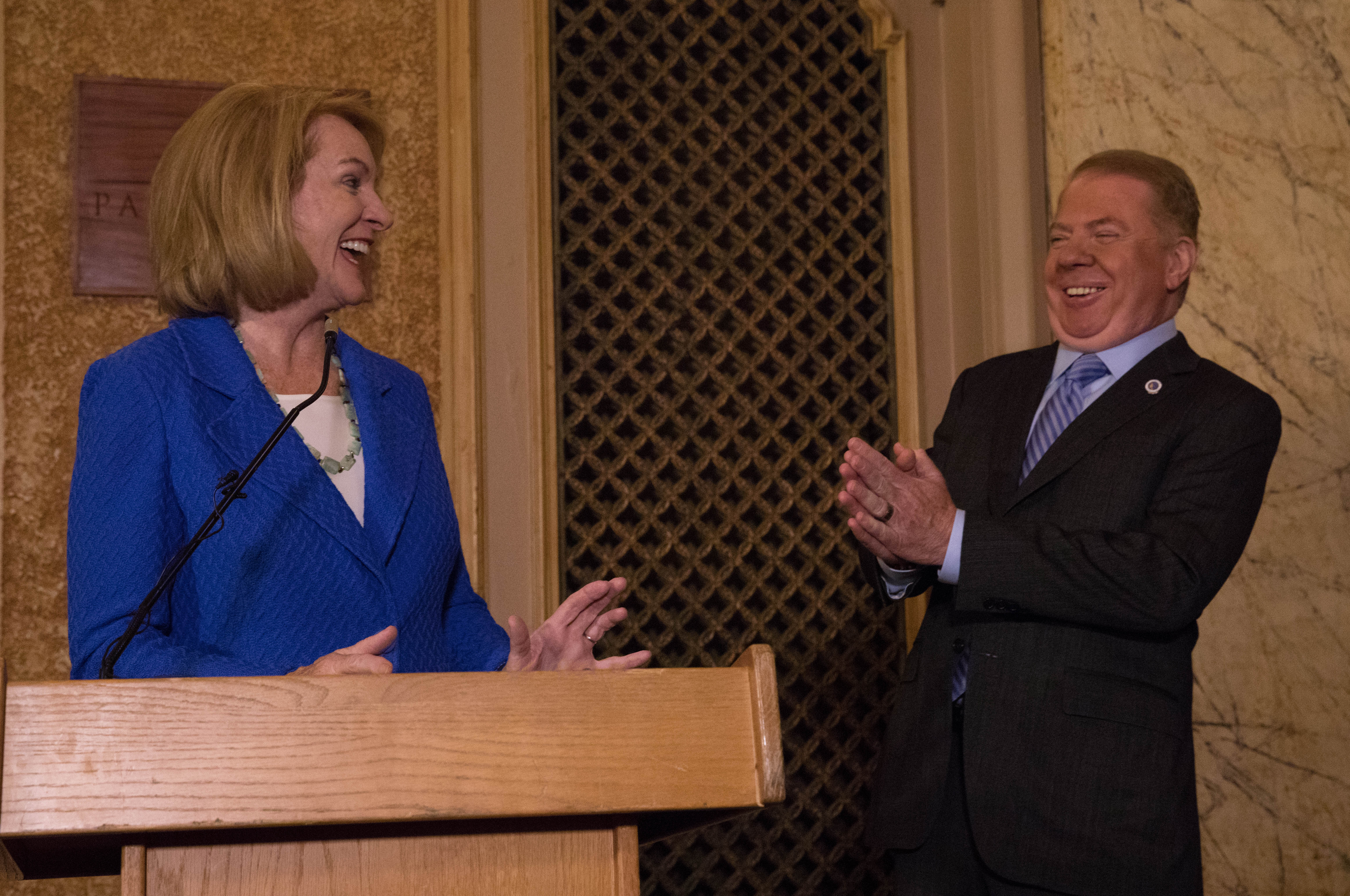 Jenny Durkan and Mayor Ed Murray share a laugh during an announcement when he is endorsed her.

Despite dangling the possibility of a write-in campaign, Mayor Ed Murray has announced, for the second time, he will not seek re-election.

Instead, in the ornate lobby of Seattle's Paramount Theater Thursday morning, Murray gave his blessing to former U.S. Attorney Jenny Durkan, already viewed by donors and the business community as Murray’s heir-apparent to the office. “There’s one candidate best suited to govern…as opposed to dividing the city on the usual political fault line: Left vs. Left vs Left,” he said.

That person, for Murray, is Durkan.

Murray already announced once before he would not run for mayor after the Seattle Times published detailed accounts of sexual abuse accusations. Although Murray has always denied the allegations, they were weighty enough to drag his polling numbers downward.

Thursday's announcement, while officially silencing chatter about a new Murray campaign, was nevertheless something of a comeback for the embattled mayor. He told King 5 last month he didn’t think anyone would want his endorsement. But when the lawsuit against him was pulled earlier this month, Murray took the withdrawal as a chance to right his toppled reputation, saying he felt vindicated. That Durkan sought and received his endorsement could be a sign that Murray is perhaps not quite so radioactive.

The man who filed the lawsuit, Delvonn Heckard, has said he will refile it at a later date.

Murray’s spokesperson, Jeff Reading, advertised Thursday’s endorsement of Durkan as a “Major announcement” that would “shake up the race for Seattle mayor.” But Murray’s support for Durkan is not surprising and what his endorsement will do for her campaign is unclear.

It could steer more donors toward Durkan, although she has already raised nearly $300,000 — $200,000 more than her closest opponent, Cary Moon.

It could also increase Durkan’s odds of getting an endorsement from SEIU, the service industry union. Its head, David Rolf, has been a longtime Murray supporter. Leading up to today, it’s been unclear which direction that large and powerful union would head.

According to Murray, Durkan approached him, as did several other candidates. After meeting with Durkan, Murray said he felt she was the best person to be mayor. “I ask my supporters to unite around Jenny and help her become the next mayor of Seattle,” he said.

Murray added later that he hoped the cloud of the allegations would not hurt Durkan.

The race for mayor has drawn 21 candidates, many of whom jumped into the race after Murray said he would not seek re-election.

Despite the praises he sung for Durkan, Murray admitted he was still sad to be giving up his office, which he has always called his most important work. But while recent polling "showed a pathway forward…that pathway was narrow and uncertain," especially as a write-in candidate, said Murray

Another factor pushing Murray away from running was a certain former mayor seeking re-election: Mike McGinn. McGinn and Murray have always disliked one another. Throughout his endorsement announcement, Murray said several times he did not want the city to return to the “divisive” days that preceded him, a clear reference to McGinn, saying he thought Durkan had the best chance to win. When asked if his endorsement was essentially anti-McGinn, Murray, however, said, "it's pro-Jenny Durkan.

The future for Murray is unclear. He said Thursday that for financial reasons he can't retire and acknowledged he had accumulated large legal bills. His term as mayor will end Dec. 31.

As far as running again, he demurred, pointing only to his previous comments that he believed this chapter in his life was over.