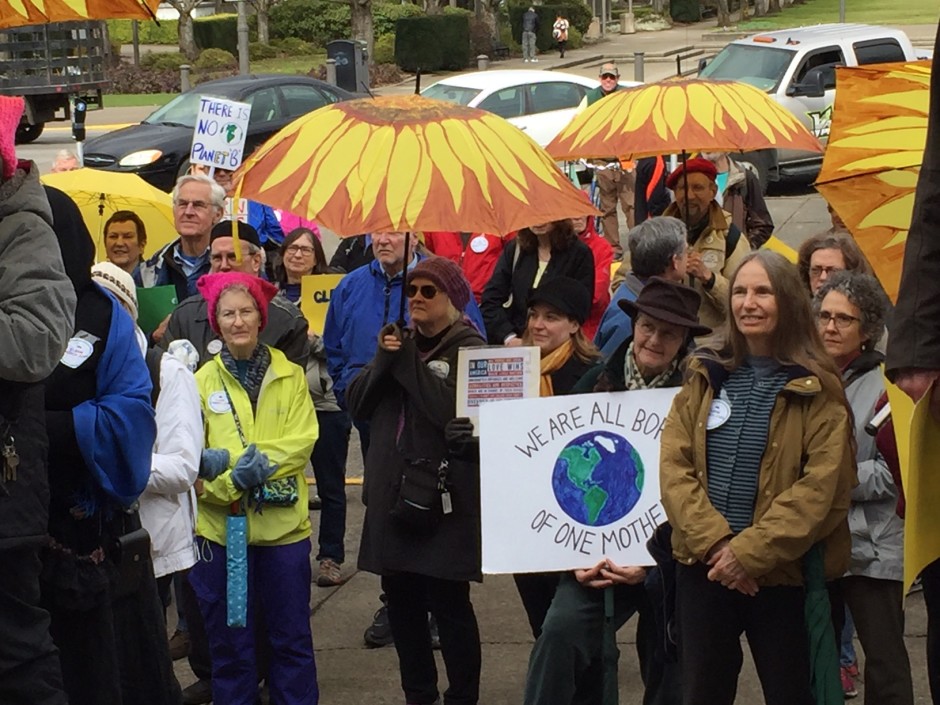 Supporters of bills that would regulate carbon in Oregon rally on the steps of the Oregon capitol building.

In the wake of last week’s Trump administration announcement that the United States will pull out of the Paris Climate Agreement, states are stepping up to fill the void. Washington announced a partnership with California and New York to form the U.S. Climate Alliance. Within days, Oregon and several other states signed on.

What is this U.S. Climate Alliance?

It’s a group of 12 states and a U.S. territory so far, launched by California, New York and Washington. Participants say they will take it upon themselves to meet international climate change targets outlined in the Paris Agreement. In short, that’s reducing carbon emissions by a little more than 25 percent from 2005 levels.

“The states who are interested in moving forward and tackling global climate change, yes we can work together and move in that direction to meet the Paris accord agreement goals,” said Oregon Gov. Kate Brown after announcing that Oregon would join the alliance.

This Alliance doesn’t carry the same punch that the U.S. would have – since our country is the second largest carbon emitter globally – but the states that have joined so far represent about a third of the U.S. population.

Yes, there are 10 cities in the Northwest that are making the same commitment – Portland and Seattle, and also places like Hood River and Corvallis in Oregon and Tacoma and Redmond in Washington. The mayors have signed a pledge to uphold the Paris Agreements by investing in renewable energy, buying electric cars, and working on environmental justice issues. Nationwide these 246 cities are home to 56 million Americans.

What can Northwest states and cities do without the federal government’s support?

States can align themselves with California on many regulatory issues. California has a special status, because air pollution in cities like Los Angeles was so bad decades ago. It can make stronger clean air standards than the rest of the country.  For example, we could join them in their effort to require vehicles to get better fuel economy.

Oregon and Washington can also look at state carbon emissions from the energy sector and other industry. Both states have lofty emissions reduction goals, but meeting those will be challenging unless there are some big policy changes.

“The Paris Goal is not as aggressive as our state of Oregon goals. So we still need to get up and on the Oregon trajectory. And I think we need to do that in part because there are other parts of the country that are going to be much slower than California, Oregon and Washington,” said Angus Duncan, chair of the Oregon Global Warming Commission.

Oregon’s recent effort to reduce emissions – a cap and trade bill -  appears to have stalled in committee. Washington’s efforts to cap carbon emissions are currently being challenged in court.

So far this has all been about regulation. Are there any non-regulatory ways Northwest states can meet international goals?

One thing to watch over the next few weeks on this front is what Oregon does with its renewable energy incentive program.  The program is designed to promote things like residential rooftop solar. Oregon’s program expires this year, and a bill to extend the tax credits just had a hearing in the House last week.

We’ve also heard concern about the Trump Administration undermining climate science as well. How does that fit into all of this?

At the very least the Administration seem to be devaluing the role that the scientific community. And if it continues, it could potentially be more problematic than saying no to the Paris deal.

The Trump Administration has suspended the work of federal science panels. Including one at the U.S. government’s Northwest Climate Science Center. The Center provides and interprets climate science for land and wildlife managers, who in turn decide how our natural resources are used. The suspension is supposedly temporary, but it’s widely being interpreted as indicative of an anti-science bent in the current Administration.

Science has always been at the heart of the climate change discussion.

“Science is humanity’s secret power, right? Science helps us look ahead, either in time or thinking about the consequences of what we do. It helps us understand the world and know what’s coming down the track so we can be prepared for it,” said Amy Snover, director of the University of Washington’s Climate Impacts Group.

And for an issue as consequential and fast-developing as climate change, the power to know what’s coming and how we can best adapt is vital to any government. If the federal government doesn’t support scientists doing climate research, that may be another area where states need to intervene and chart their own course.

Washington and Oregon lawmakers, as a whole, seem to understand the role that science should play. But how highly lawmakers value climate science will ultimately be measured in how well its funded and how much weight the science is given when considered against ideological, social and economic concerns.