How activism changed the region's transportation 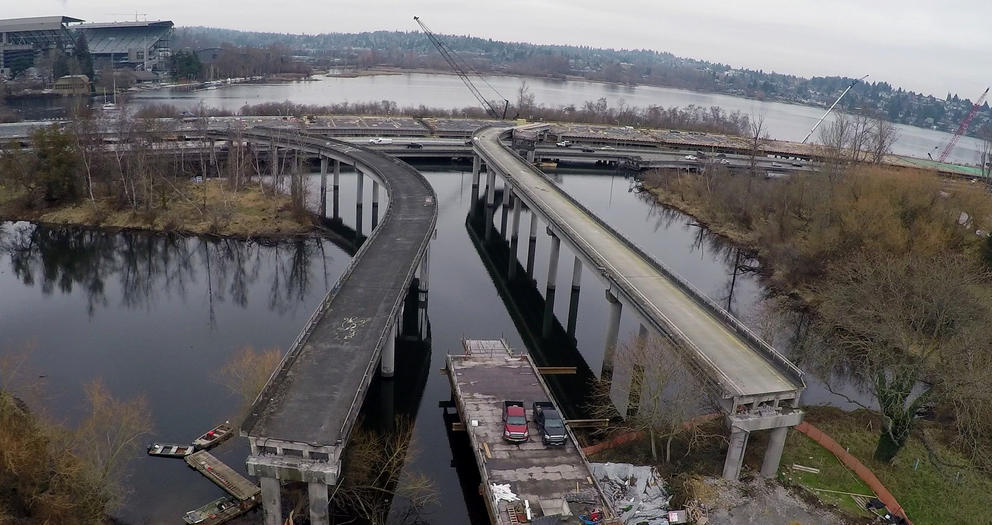 The remaining sections of the old westbound SR 520 off-ramp and the R.H. Thompson "Ramps to Nowhere" as seen in February 2017.

Citizen activism is making a comeback, especially in Seattle. Since Donald Trump’s inauguration, we’ve seen the largest protest march in the city’s history — the Womxn’s March, with estimates of as many as 175,000 participants — plus demonstrations regarding immigration policies at Sea-Tac Airport and Westlake. Last week we saw marches protesting the shooting of Charleena Lyles; on Sunday, community members continued their protest of the shooting by temporarily shutting down the Seattle Pride parade.

Seattle also has a long history of activism when it comes to things more local and concrete (literally) than trade policy or war. I’m thinking of two projects that are moving forward yet are marked by a history of citizen pushback. And both, by the way, involve floating bridges.

Sound Transit is finally expanding to the Eastside and will be working on Interstate 90 so that it can accommodate a new rail line stretching from Seattle across Mercer Island to Redmond. The plans have upset residents of Mercer Island, who have been told they will not be able to use the HOV lanes as solo drivers, which has been permitted in the past. This was a special concession by the state to make access to I-90 and the island easier for residents when I-90 was expanded back in the 1970s. Negotiators from that time say the idea was for the arrangement to continue until mass transit came through. Islanders say they will sue if they can’t use the lanes.

Whatever you think about the merits of that, citizen pushback against the original plans to expand I-90 back in the 1960s and ’70s resulted in a much better, and bigger, project than was originally envisioned. The revised plan resulted in a bigger freeway across the island. The community lobbied for and managed to get a lid built over some of I-90, which added bike trails and parkland, and mitigated the noise and smell.

Across the water, Seattle was an even harder sell on the I-90 expansion, in part because while the wealthy white community on Mercer Island was getting kid-glove treatment, the state highway department, now called the Washington Department of Transportation, was using brute force on the Seattle end. Its plans called for digging a huge trench through the Central District’s Judkins Park and building a massive new freeway interchange in the same spot.

The community fought back, decrying the difference in treatment between white and black neighborhoods. If Mercer Island got a lid, the Central District insisted that it get one, too. As a result of protests and negotiation, that happened. The I-90 lid near the Mount Baker tunnels resulted in beautiful parks and a bike/pedestrian tunnel, and is now part of the Mountains to Sound Greenway. The old Colman school, once slated for demolition because of I-90, was occupied in the early 1980s by activists who wanted to save it for community use. That finally occurred when it was purchased by the Urban League and turned into the Northwest African American Museum and affordable housing. A neighborhood was enhanced, not destroyed, by a large freeway expansion because citizens demanded improvements. The area is poised for new light-rail-related growth and is better because of the infrastructure activists demanded.

The second project is the State Route 520 expansion. The “new” Evergreen Point Bridge opened in the early 1960s and was supposed to link to the planned R.H. Thomson Expressway, a freeway that would have run through the Washington Park Arboretum and linked up with I-90. By the late ’60s, people had become more skeptical of freeways, and a coalition of anti-freeway activists formed to stop the expressway from being built. The grassroots movement involved many activists, ranging from neighborhood advocates to the Black Panthers to Victor Steinbrueck, local architect and savior of Pike Place Market. Activists blocked the bulldozers in the arboretum and forced City Hall to rethink its plans. In 1972, the voters pulled the plug on the expressway, and the results are the famous “ramps to nowhere,” visible from SR 520 near the arboretum, and vestiges of a freeway that were stopped in its tracks.

The current $4.56 billion 520 bridge replacement and freeway expansion projects are moving along. The new bridge, which opened last spring, is taller and wider; traffic is tolled and moves quicker than it used to. The long section of the project between Foster Island and Interstate 5 is now being built. That stretch will also feature a lid and other upgrades. It includes major trail improvements in the arboretum and restoration of natural areas damaged back in the ’60s.

One controversy is whether or not to keep one set of columns and crossbar from the old ramps to nowhere as a monument to citizen activism. The Seattle City Council likes the idea and has funded a feasibility study. The arboretum overseers are also in favor, partly as the result of citizen activists — some of whom were involved in the original anti-freeway efforts of the ’60s — who have pushed the idea. The ramps symbolize the power of citizen involvement. The Seattle Times reports that WSDOT is reluctant because keeping a partial ramp is a bigger hassle than demolishing it.

We have proof that activism works. The I-90 and 520 expansions are better than they would have been without pushback. Keeping a powerful symbol of that in the arboretum is fitting for the place, the times and for the future.

This column originally appeared in the June issue of Seattle Magazine.