He was already mourning. Then his brother was shot by police. 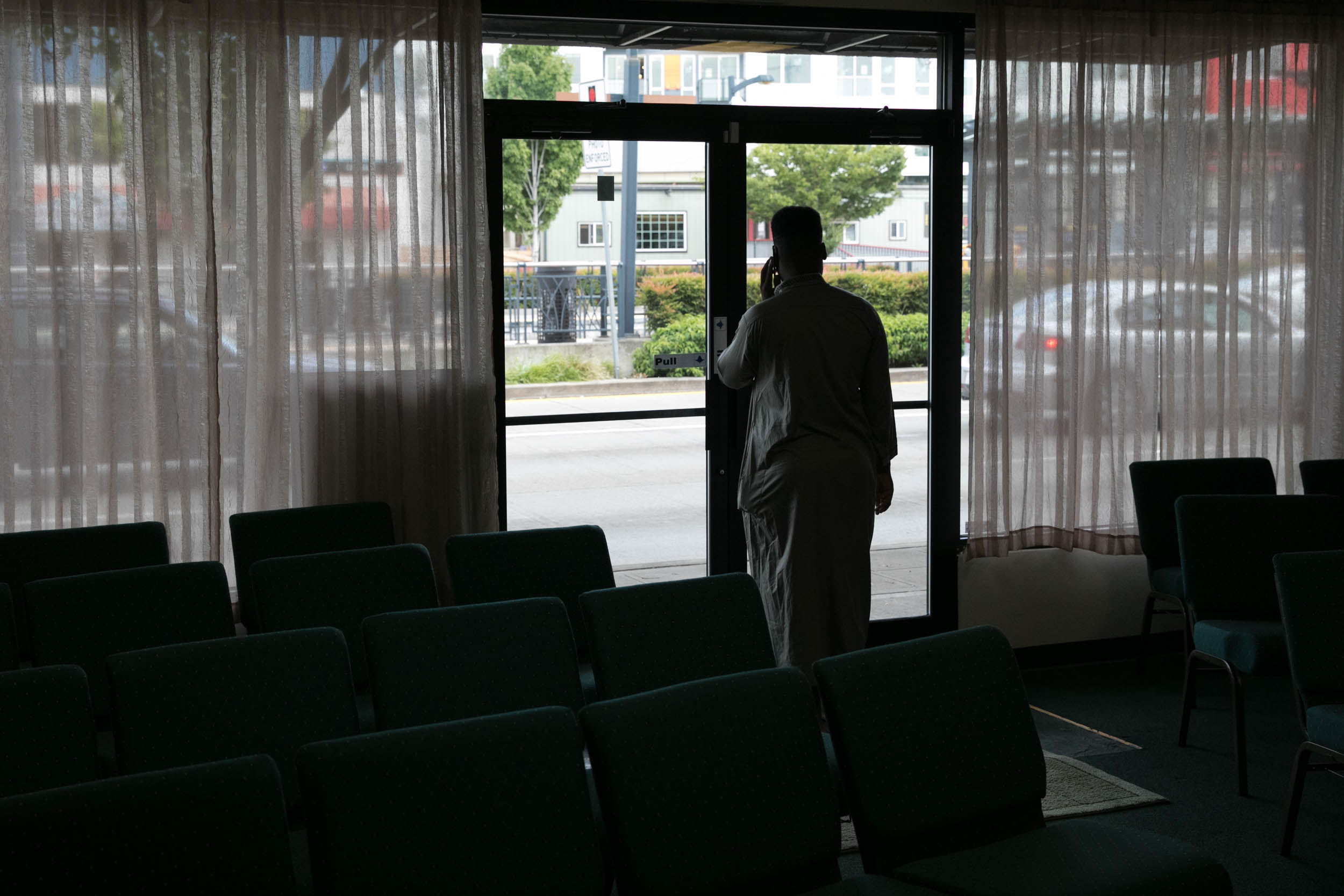 Ephraim Nelson, brother of Eugene Nelson, 20, looks out on Martin Luther King Jr. Way at the front door of The Way of Holiness Church in Rainier Valley, Seattle during a meeting on Monday, August 14, 2017.
(All photos © Matt M. McKnight/Crosscut)

Seven months before his brother was shot and killed by Kent police officers, Ephraim Nelson, 21, was on the floor giving CPR to his mother. She’d only just reported feeling strange less than 24-hours before she collapsed in the middle of the night. She was fine the day before. But by the time her son got to her, she’d already died of sudden heart inflammation caused by a freak viral infection.

After his mother's death, it was mostly just Nelson and his younger brother Eugene sharing their South Seattle home. Their father died more than a decade earlier when the boys were six and five. Ephraim Nelson's "father figure" mentor had also died just months before his mother.

The brothers had a half-brother in New Orleans, Ri-Chard Clark, whom they hardly knew. But for the most part, Nelson recalls, “it was just Eugene, mom and me.”

The two brothers — a year apart in age but roughly the same height with the same shaped face and the same hair cut, close on the sides and longer on top — dealt with their mother's death differently. Brother Eugene avoided coming home, spending as much time as he could with friends. He was just "existing" and not living, says Y. Monet Miller, Eugene's fourth-grade teacher and de facto godmother.

Nelson says he didn't feel as strong as his brother, giving in more to the grief. "I was just hurting," he says. "She was the only person I really had." But you can't hear it in his voice, which doesn't once waver, even while explaining that he tries to “stay away from the dark” now because anytime the lights are out, he sees his dead mother, her “tongue all puffed.”

And now Nelson has another death to deal with. Last week, police officers shot his brother Eugene in Kent’s East Hill Neighborhood. According to the Kent police department, he had approached his ex-girlfriend’s business in a Kent strip mall, violating a no-contact order set as the result of a fourth-degree domestic violence assault charge. When confronted, the department says he fled in a stolen vehicle, dragging an officer and a police dog who tried to stop him.  Two officers fired, killing Eugene.

The officer and the dog sustained minor injuries.

Court records show there was a $25,000 warrant for Eugene's arrest; he’d swiped the keys from a BMW dealer when the manager wasn’t looking. It was another tick in a growing list of legal troubles for the 20-year-old, mostly theft charges and what his family describes as a complicated relationship with his ex-girlfriend.

But Nelson and those closest to him describe Eugene as a young man with so much more depth to him than what’s on file at the King County courthouse — giving, strong, intelligent, “silly.”

“He was a caring person,” Nelson says. “He would always give you his last. If he had five dollars in his pocket and you wanted a Dick’s burger that cost three something, he’d give that to you.”

For the most part, during an interview at The Way of Holiness Church of God in Christ, a hole-in-the-wall on Martin Luther King Jr. Way in Rainier Valley, Nelson's face is steel. He keeps his eyes trained on his hands, which are resting in his lap. His face is stubbled, but braces make him look young.

It’s only when Nelson talks about life moving forward without Eugene that he cracks. “He could almost read my mind,” he says. “When you’re with someone that long, [his death] really takes a piece out of you."

“It just doesn’t feel right,” he says, “Imagine your mom, your brother, everyone is gone. I have Ri-Chard [his half-brother], but inside I still feel alone. It still feels kind of dark.”

In the days after Eugene’s death, Nelson and Miller have become part of a growing and organized circle of families who have lost loved ones to police shootings and who provide support and council to other survivors. Last Friday, they met with Katrina Johnson, whose cousin Charleena Lyles was killed in North Seattle in June, and Sonia Joseph, whose son Giovonn Joseph-McDade was also killed by Kent police officers that same month. The pair also met with Andre Taylor, the founder of Not This Time, an advocacy organization for police accountability. It was created after his brother, Che Taylor, was shot and killed by Seattle police officers in February 2016.

They also have the support of the local chapter of the Council on American Islamic Relations (CAIR). Eugene became a Muslim three years ago, his brother explained.

Eugene fully embraced Islam in high school, attending a mosque in the Rainier Valley, Nelson says. He started picking up bits of Arabic and Somali, eavesdropping when he could on young Somali kids who thought he couldn’t understand what they were saying. He gained the community's trust, says Nelson. So much so, in fact, that Nelson's Muslim co-worker at his security job with Amazon would occasionally mistake him for Eugene.

News stories about Eugene's killing have not depicted who the young man was, Miller says. She acknowledged he may have made some wrong choices but says there was much more to the young man she knew and had known since he was a boy. She remembers the first time she met Eugene, in the fourth grade. “I didn’t birth Eugene, but from the first time I met him I knew he was mine,” she says. “When I first met him, he never did his work. I asked him why he wasn’t doing his work and he said, ‘Because they already say I’m stupid so why should I do my work?’ And all kinds of lights and flames went off in my head because no one’s that way. I told him from that point on that that wasn’t who he was and I was gonna be there with him and make sure he becomes a successful human in life.”

She kept her promise. Sometimes, when Eugene’s mother was having troubles with him, she’d call Miller and Miller would take him off her hands. Even as Miller traveled for professional conferences, she’d speak with the family over the phone, checking in on Eugene. In recent years they were working together to get him his GED. He'd gotten into some stuff, yes, but Miller says she knew "he had the potential for greatness."

And when Eugene was shot, she rushed to the scene. “I would not leave the crime scene until he was no longer there,” she says. Eugene would know, she says.

Eugene's funeral will be soon. Afterwards, Miller and Nelson will be faced with the same question other families in their situation have had to ask: What's next? Will they become public figures at police shooting press conferences as others have done? Miller seems interested in helping push for new initiatives for young people. She wants to start a group for young men that meets weekly, where they can talk about crime and law enforcement and their futures.

For Nelson, it's less clear. The ordeal of this past year is something few people can comprehend. He will keep working as a security guard on the night shift. And he says he will try to build a relationship with his half-brother Ri-Chard, who moved up from New Orleans after Nelson's mother's death. The two plan to get an apartment together.

"No one I know personally has been through what I've been through," says Nelson. "It’s just a journey that I’m gonna have to figure out on my own."

This story has been updated to reflect a change in timing for the funeral service. It had earlier been planned for Wednesday, but has been put on temporary hold.