What a park in the ID tells us about urban life 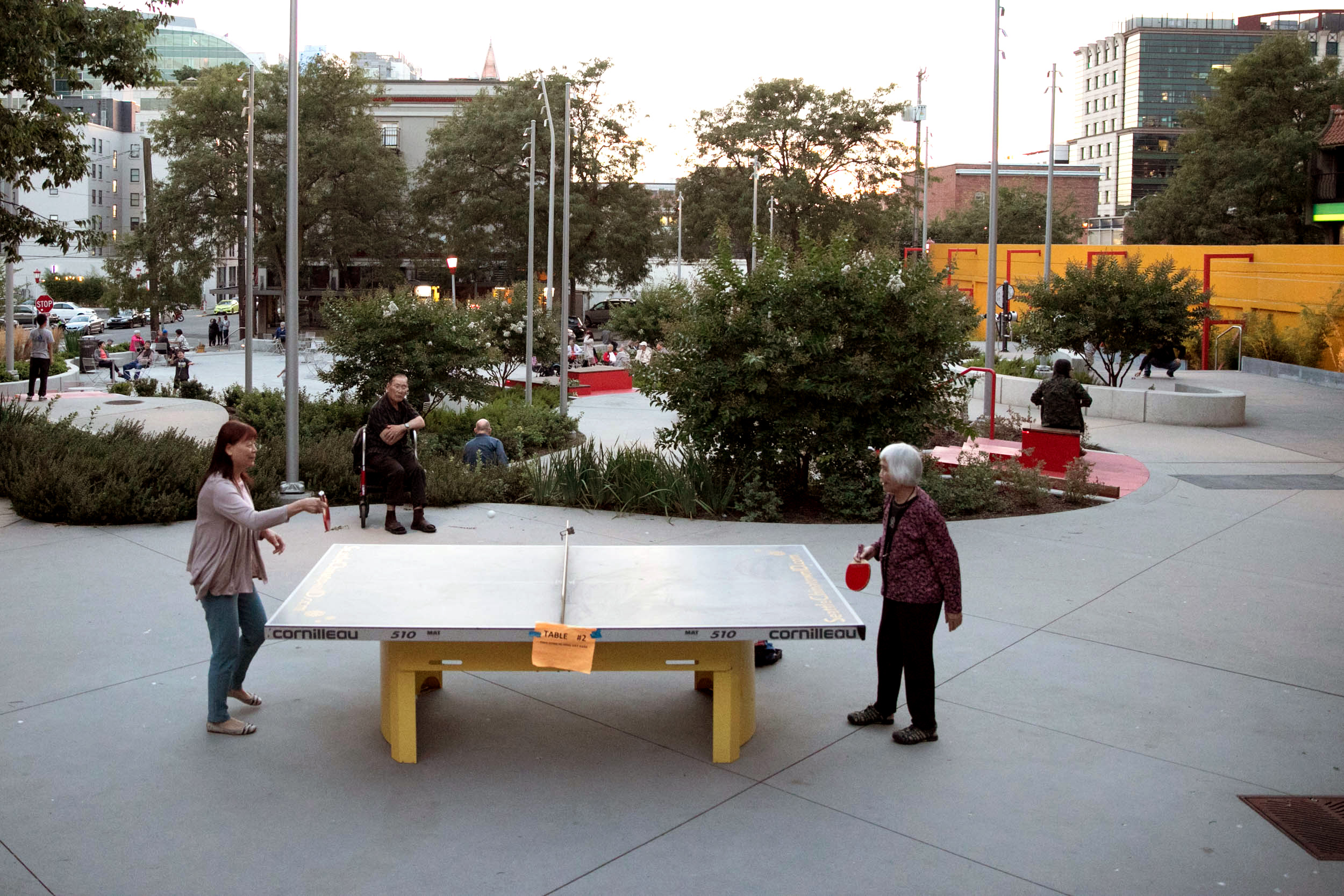 The expanded Hing Hay Park in the Chinatown International District (CID) is now open to the public. Not in the official sense with ribbon cutting and speechifying. But in the sense that the construction fences are finally down and people can freely meander about the place.

For many weeks this new City park, located at King Street and 6th Avenue South in Seattle’s CID, was virtually finished. But it sat, sequestered behind a chain link fence, just tantalizingly out of reach. It seems that a contractor error had affected the lighting, without which the City did not feel it would be safe at night. Corrected now, the park is fully accessible, albeit not fully finished. A grandly scaled red, polygonal archway will be installed near the corner of 5th Avenue South and King sometime over the coming weeks.

The new part of Hing Hay doubles the size of the previous park. That space — a classically designed square with a formal, traditional pavilion — has long been a favorite in the community for festivals and folks doing their morning tai chi. Hing Hay served as a centerpiece of the CID and was part of a collection of unique parks including Kobe Terrace, a few blocks north and the Donnie Chin International Children’s Park that is several blocks east. In recent years, the park had been showing signs of age and wear; this project has restored the old and brought in an entirely new energy.

The new addition also replaces an old bunker of a building occupied by a post office with its loading docks facing the street, hardly a positive contribution to the district.

The Chinatown International District has been seeing lots of changes. New housing is being built. Older buildings are being renovated. There are new shops and cafes. A singular sour note is the plethora of massage places that seem to populate every block, with their identical “Open” neon signs.

If nothing else, this new park is remarkable in that its design and construction revealed a large, stunning Zelkova tree that was largely obscured by the loading dock of the post office occupying the site for decades. Almost as if by magic, this gorgeous, full-canopied tree seemed to appear and anchors the seam between the old and new parts of the park.

There is a large central space occupied by moveable tables and chairs that can be readily converted into performance space. This element was sought by the community and the design, lead by MIG/SvR and the Chinese firm Turenscape responded with obvious enthusiasm. The entire park can be transformed into an amphitheater, with sinuous terraces surrounding the stage. The soon-to-come arch will frame the performers, not unlike a traditional proscenium stage. Ever since the Nippon Kan Theatre closed more than ten years ago, the CID has been missing a major venue for live performances. It now joins the Theatre Off Jackson as one more performance venue. On Wednesdays, through Sept. 6, the park is hosting free lunchtime stories about the neighborhood in a program co-sponsored by the Wing Luke Museum and InterIM CDA.

The $3 million price tag included renovation of the older portion, which needed some touching up after several decades of use. The Park is fully accessible with its gentle winding pathways. For the more energetic, an exercise station and a ping pong table are perched on the upper level. Running along one side is a wall painted bright yellow with red steel buttresses, providing a simple, vivid backdrop for the complex composition of the space. It’s fascinating to see this public space so heavily used as if there had been a long pent up demand. Tables are often full and couples pushing baby prams stroll about the pathways. For such a relatively small space, the amount of activity is striking. It’s clear that people value pure community spaces; Hing Hay has been revived with a new set of users and an elevated role in the district.

In recent years, both the City and its neighborhoods have been learning an important lesson about public spaces. It’s not enough just to design a pretty place and cut the ribbon. It needs to be filled with programming, managed like any public venue and subtly supervised. Thatcher Bailey, Executive Director of the Seattle Parks Foundation observes that “The new Hing Hay Park lives up to its promise as the heart of Seattle’s Chinatown International District. It’s a triumph of community-led design.”

On a recent warm Sunday afternoon, the park was fairly teeming with people — from toddlers scrambling over the red terraces to teenagers trying out the exercise equipment and seniors engaged in animated conversation. Most of the tables and chairs were filled and people were ambling out the pathways — all within a space that’s smaller than one-quarter of a block.

The expanded Hing Hay Park vividly demonstrates how much people value having urban open space right in the heart of the city. Civic organizations like the Seattle Parks Foundation have been singing this tune for years. Here is the proof.

This story has been amended to clarify information about the Theater Off Jackson.