Patriot Prayer leader dislikes racists, but they seem to hear a whistle 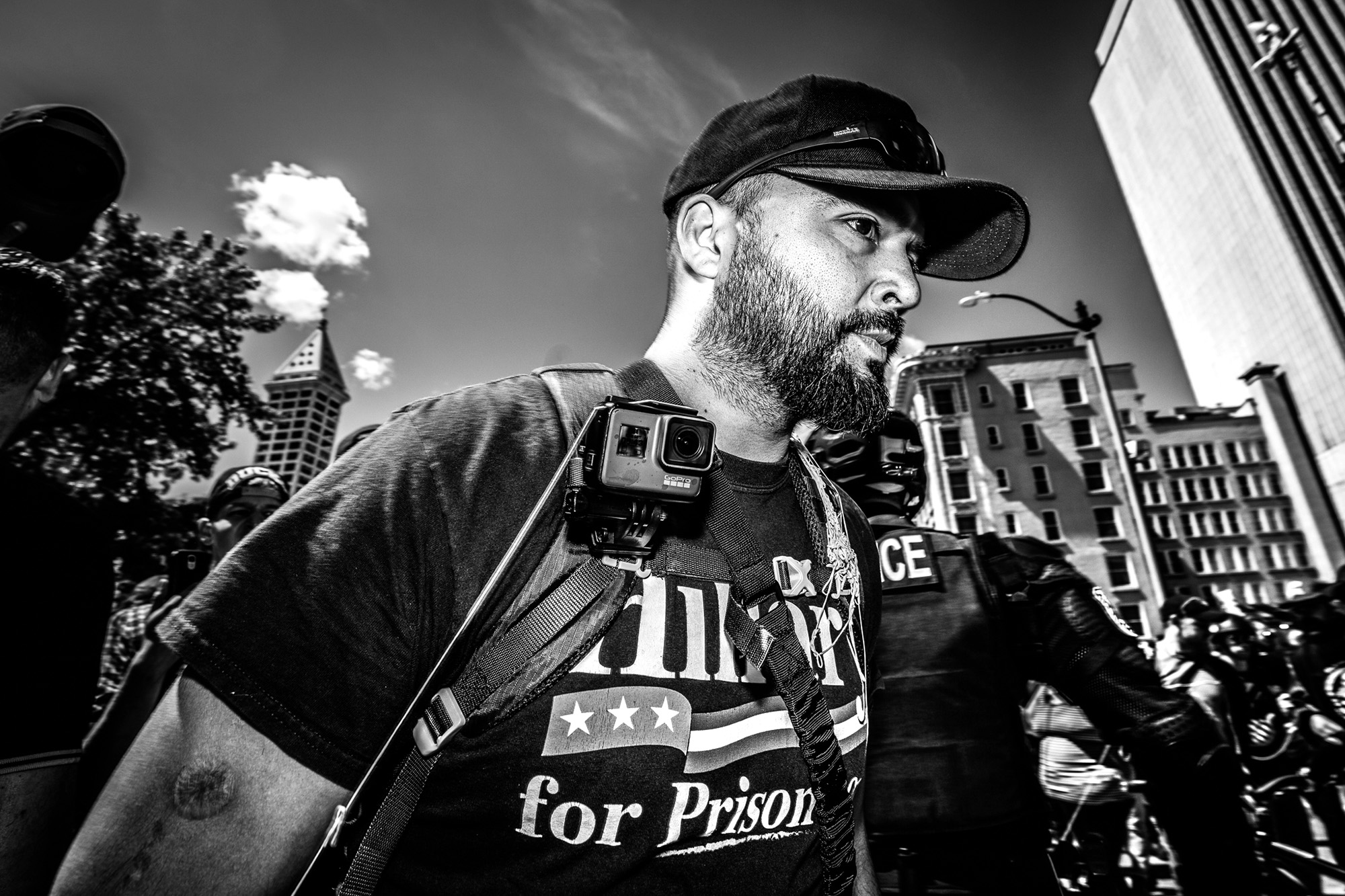 Joey Gibson of the pro-Trump group Patriot Prayer at ACT for America's "March Against Sharia" in Seattle on June 10th, 2017.

Editor's note: Patriot Prayer said Friday afternoon that it is canceling a planned rally in San Francisco on Saturday for safety reasons, but authorities were maintaining plans for a heavy police presence.

Joey Gibson, a Washington-based, Japanese-American activist whom some describe as a member of the "alt-lite," is on his way to San Francisco. He has organized a rally scheduled for Saturday at Crissy Field that is setting off alarms about another possible showdown between protesters on the left and the alt-right, including white supremacists.

But Gibson swears he's not a racist.

“Fuck white supremacists! Fuck neo-Nazis!” Gibson said to the hundreds gathered at Westlake Park in Seattle on August 13th at a rally he organized. “I have no use for that kind of thinking. It’s wrong.”

But experts, and many others, aren't sure how seriously they should take Gibson's denouncements. In fact, he and his Patriot Prayer supporters have often been lumped in with hate groups.

A week before Gibson’s Seattle rally, he and others gathered in Portland, where according to the Southern Poverty Law Center, a number of white nationalists appeared. Fights broke out at what was planned as a protest of “left-wing violence.” The rally, according to the Southern Poverty Law Center, “threatened to turn into a riot several times.” Among those in the crowd were Jake Von Ott, a local leader of the white supremacist group Identity Evropa.

In addition, the white supremacist on a Portland train in May who screamed anti-Muslim insults at two teenage girls and who later fatally stabbed two men who intervened, had attended Patriot Prayer rallies. Just one week after the killings, Gibson and his supporters held a "Trump Rally for Free Speech" in the city.

In June, Gibson participated in an anti-Sharia march in Seattle. The march was organized by ACT for America — "protect and preserve American culture," reads the group's website; the Southern Poverty Law Center considers the organization a hate group. Later that month, Gibson marched onto the campus of Evergreen State College in Olympia where he was met with fierce opposition, despite earnestly attempting to talk to, and shake hands with, black-clad anarchists. In the end, Gibson walked away bleeding.

Members of the Proud Boys, which espouses an “anti-political correctness, anti-racial guilt” agenda in “an age of globalism and multiculturalism,” have also showed up at Gibson’s rallies. So have members of the Three Percenters, an anti-government group that is part of the larger militia movement; it believes individual liberties — such as free speech and gun ownership — are in jeopardy. Militia groups in the U.S. have grown since the presidency of Barack Obama and the housing crisis and recession of the late 2000s, according to the Anti-Defamation League.

Political leaders have spoken out against Gibson and even attempted to put a stop to Saturday's San Francisco rally. In a press release, U.S. House Democratic leader Nancy Pelosi referred to Gibson’s gathering as a “white supremacist rally,” and said she was “deeply alarmed by the hateful and dangerous nature of the event, its timing so soon after the horrors in Charlottesville.”

San Francisco Mayor Ed Lee also said he was disappointed the National Park Service issued a permit for the event, noting that the “the shameful, anti-American trend of hate-filled extremist rallies will unfortunately be allowed to continue this weekend in our city.”

“Do not engage with the members of this group, whose only priority is to incite violence through divisive rhetoric,” Lee said.

But Gibson, who lives in Vancouver, Washington, says the San Francisco rally will have a diverse group of speakers including black and transgender people. He says the motive behind organizing these rallies is to engage others. “I don't go into these areas just so I can give a speech to people who support what we do the whole time. It’s been to speak to the protesters. That’s really what it’s been about,” Gibson said in a recent telephone interview. Gibson also said he didn’t “want to be involved with anyone that uses race to further their agenda.”

“We’re trying to get beyond the labels,” he said.

The 33-year-old Gibson grew up in Camas, on the Columbia River just east of Vancouver, with two siblings. He says he attended decent schools and had good parents who raised him Catholic. (His father is Irish, his mother Japanese.) He played high school football, got into some trouble with the law that included, according to The Columbian, probation violations and a break-in at a restaurant. Gibson, however, eventually turned his life around, graduating from Central Washington University with a degree in psychology.

About religion, Gibson says he didn’t like certain aspects of the Catholic faith, like the concept of hell.

“It actually really turned me off from religion and just put me more on the path of being spiritual and reading the New Testament,” he says.

He launched a scrappy political career because he felt the country was beating up on Trump supporters.

In 2016, Gibson attended the Republican National Convention in Cleveland where he tore up a protester’s anti-police sign only to turn around and apologize, handing him a $20 bill.

When he returned home “for a long time all I did was hold flags on the streets,” Gibson said. “I was concerned people were afraid to say what they believed in because of all the hatred right now.”

But then, wearing a Hillary for Prison T-shirt, Gibson organized his first political rally.

“I’ll admit, I really, really did not like Hillary. I had some major issues with her, but that’s done and over with,” Gibson said.

“It’s an issue I’ve had. I’ve had quite a bit of anger and hatred toward our establishment in D.C.,” he said. “The one thing I appreciate about Trump is he pretty much destroyed the Republican establishment.”

He continues: "I don’t care about who people vote for anymore. I don’t want to be divisive like that.”

Gibson, however, stands by his views about Islam, though he adds that he’s starting to realize some of what Muslims believe is influenced by culture. He says Islam is problematic because it can be oppressive to both women and gays.

“To have a problem with Islam is not racist,” Gibson said. “That’s having an issue with someone’s ideology, not race.”

“I will speak out against that because I do believe in human rights.”

“He’s completely out of his element and doesn’t really understand what he’s unleashed, but he seems to enjoy the limelight,” said Randy Blazak, a sociology professor at the University of Oregon who has studied hate crimes and hate groups for 25 years.

Blazak said although Gibson and others may purport to hold events in the name of free speech, they often don’t really care about the free speech of, say, Muslims or Black Lives Matter.

Brian Levin, director of the Center for the Study of Hate and Extremism at California State University San Bernardino, said part of the reason Gibson has been successful in attracting attention is because he's perceived as sincere.

“Dancing with bigots either by accident or on purpose is less important than authenticity,” Levin said. But Levin said he’s still not sure whether Gibson’s efforts to separate himself from others who hold racist views are heartfelt.

“People who are hardened bigots are attracted to his forum. He’s either ineffective, incapable or tolerating it,” Levin said. “The bottom line is over time is he going to sustain a toleration of loathsome, unmistakable bigots in his tent or not? The test of this will be time.”

“Denunciations when the kitchen gets hot are different when the stove is not on a boil,” Levin added.

For his part, Gibson, who is married with two children, says he can count on his family to believe in what he’s doing.

“I think they’re really proud that I’m doing what I believe is right,” Gibson says. About his parents, he adds: “It drives them crazy when they see things like I’m a white supremacist and stuff because they know exactly who I am.”

Gibson also thinks the attention on white supremacists has been overblown.

It’s a problem, he admits, but “kind of like people running around trying to find ghosts in a way.”

At the Seattle "Freedom Rally" earlier this month, Gibson — full beard, baseball cap worn backward with an imprint of "GIBSON" — opened the stage to Black Lives Matter activists and others with opposing viewpoints. Gibson appeared comfortable even as some spoke about police brutality and other obstacles African Americans face.

Gibson's San Francisco "Freedom Rally," according to its Facebook page, has 408 planning to attend and more than 1,000 people interested in attending. "This is an opportunity for moderate Americans to come in with opposing views. We will not allow the extremists to tear apart this country," reads a description of the event on Facebook. After San Francisco, he plans to return to Portland for a rally on September 10th.

“I’ll tell you this much, it’s not easy, it’s not necessarily fun doing this,” Gibson said when asked whether he believes what he’s doing is accomplishing anything.

“Sometimes, though, I leave a rally and think this world would have probably been better off if I didn’t do that.”