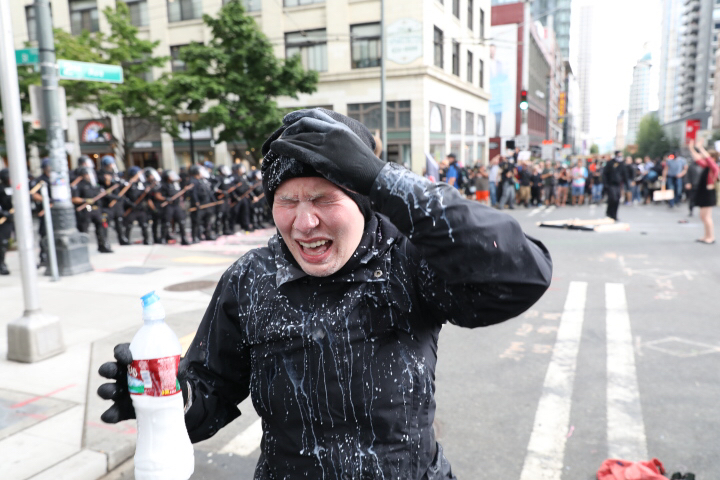 A protester washes her face with milk after being hit with pepper spray that was deployed by police. An estimated 1,000 people joined in a Solidarity Against Hate march in downtown Seattle on Sunday. (Matt Mills McKnight/Crosscut)

This post was updated with Tweets and dispatches from Seattle as events unfolded in the aftermath of the 'Unite the Right' Rally in Charlottesville.

The day after violence erupted between white supremacists and counter-protesters in Charlottesville, Virginia, a Solidarity Against Hate rally and a Freedom Rally Seattle were scheduled to square off. A crowd of about 200 gathered at Denny Park to counter what they say has been too many hateful, far-right extremist rallies in the city as of late.

The Denny Park group included the anti-fascist group The Greater Seattle IWW General Defense Committee, the Freedom Socialist Party — Seattle Branch, Veterans for Peace and several others. They were planning to march through downtown to Westlake Park, where the Patriot Prayer group was scheduled to hold a rally. “The West Coast has slowly been infected with communist ideologies throughout our entire culture,” the group posted on its Facebook page. “Patriot Prayer will bring in a positive message to Seattle that the people are starving for.”

Team coverage contributed by David Kroman, Lilly Fowler and Mason Bryan. A full story on the protests is here. Enrique Cerna and Stacey Jenkins also reported live from the scene on Facebook.

UPDATE, 5:05 p.m. Police declared the Westlake Park event, the Freedom Rally, officially over about 4:55 p.m. The Rally's program had ended around 3 p.m., but many more people took the microphones that had been set up to make various points. And the two sides continue to talk and sometimes shout at each other. In a Twitter posting, the Seattle Police Department said officers would remain in the area.

UPDATE, 4:28 p.m. Some people from the Freedom Rally and counter-protesters are still at Westlake Park, nearly an hour and a half after the rally ended. Across fencing, there is chanting of "Nazis, go home" from counter-protesters and exasperated shrugs from rally supporters.

UPDATE, 3:40 p.m. - The small group of counter-protest marchers who tried to head to Westlake appear to have abandoned their plan. In Westlake Park, remnants of the Freedom Rally group and counter-protesters have continued to argue across a fence separating them.

At Westlake right now. Protesters and counter protesters are arguing across the fence. pic.twitter.com/jfuNVHpevC

UPDATE, 3:30 p.m. - The bulk of the protest is headed back to Denny Park, but some are splitting off, still trying to get to Westlake Park.

UPDATE, 3:24 p.m. - As the counter-protest heads back, Councilmember Mike O'Brien says the Seattle Police were consciously keeping them away from the Freedom Rally.

UPDATE, 3:14 p.m. - The Freedom Rally in Westlake Park is over but hundreds remain there.

UPDATE, 3:01 p.m. - Leaders of the counter-protest say they are heading back to Denny Park and ending the official march. Enrique Cerna says the counter-protest leaders apparently want to avoid confrontations. Lilly Fowler reports there are still hundreds at Westlake Park.

Stage opened up to a variety of views, a minority aren't happy pic.twitter.com/eKolmnCxqM

UPDATE, 2:52 p.m. - Although the front of the counter-protest is fairly tense, the scene is more relaxed farther back in the march.

UPDATE, 2:46 p.m. - A number of counter-protesters are being treated after getting hit by pepper spray. Others are sitting in the intersection. Police have blocked off second avenue.

Some people sitting in the intersection of 2nd and Pine. pic.twitter.com/YlxbGvTh89 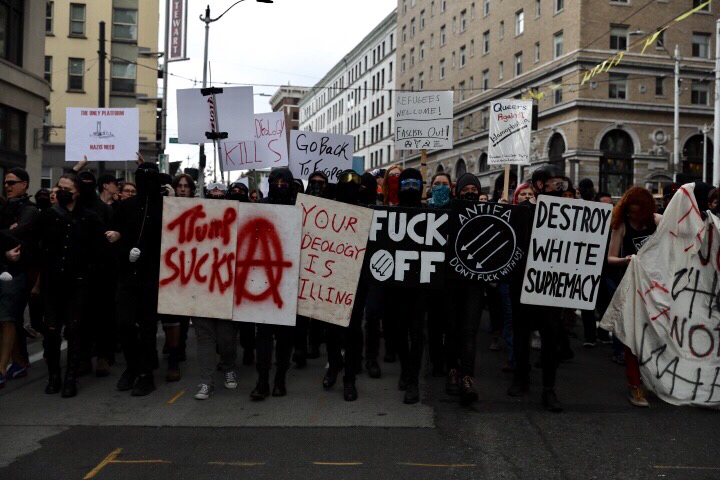 UPDATE, 2:41 p.m. - Police used pepper spray and blast balls in the vicinity of some antifa protesters.

Police use pepper spray/blast balls. Not sure what set it off. pic.twitter.com/xkCR7uTJ8T

UPDATE, 2:38 p.m. -  At the Freedom Rally, speeches are taking place, but it's hard to hear what is being said.

Crowd at Westlake Park now, a few hundred people. Everyone is talking over each other. Hard to hear. pic.twitter.com/g9yMc95WJL

UPDATE, 2:32 p.m. -Seattle Police appear to be trying to keep the counter-protest from reaching Westlake, in hopes of keeping the Freedom Rally supporters and their critics apart, according to Crosscut's David Kroman. Counter-protestors are chanting, "Let us march."

UPDATE, 2:21 p.m. - Counter-protesters have been chanting about the death of Heather Heyer, the 32-year-old woman killed when a car plowed into a crowd on Saturday. "We stand with Charlottesville! We remember Heather."

UPDATE, 2:19 p.m. - Counter-protestors are being allowed through to Westlake Park.

No blockade at 2nd Ave, protestors will be allowed to march south.

UPDATE, 2:16 p.m. - Enrique Cerna is reporting live from the scene on Facebook.

Rinsing out eyes of a protester who was pepper sprayed: pic.twitter.com/PT6HFzkRwm

UPDATE, 2:09 p.m. - Police hesitant to discuss tactics, and reporter David Kroman tells us it seems like cops are trying to prevent counter-protestors from going to Westlake, where the Freedom Rally is.

UPDATE, 2:03 p.m. - Police used pepper spray along the route of the counter-protest

Rinsing out eyes of a protester who was pepper sprayed: pic.twitter.com/PT6HFzkRwm

I'm at Westlake Park where a crowd is starting to gather. This is Romanov who says he's against the violence in Va. pic.twitter.com/RGyrel9AeM

UPDATE, 1:30 p.m. - The "Solidarity Against Hate" rally crowd is beginning to march toward Westlake park, chanting "No Trump, no kkk, no fascist USA."

I'm at Denny Park for a "Solidarity against hate" gathering/march. After #CharlottesvilleVA, there's already a fairly large police presence. pic.twitter.com/P04Ro35F72