Will the biofuels era take off at Sea-Tac? 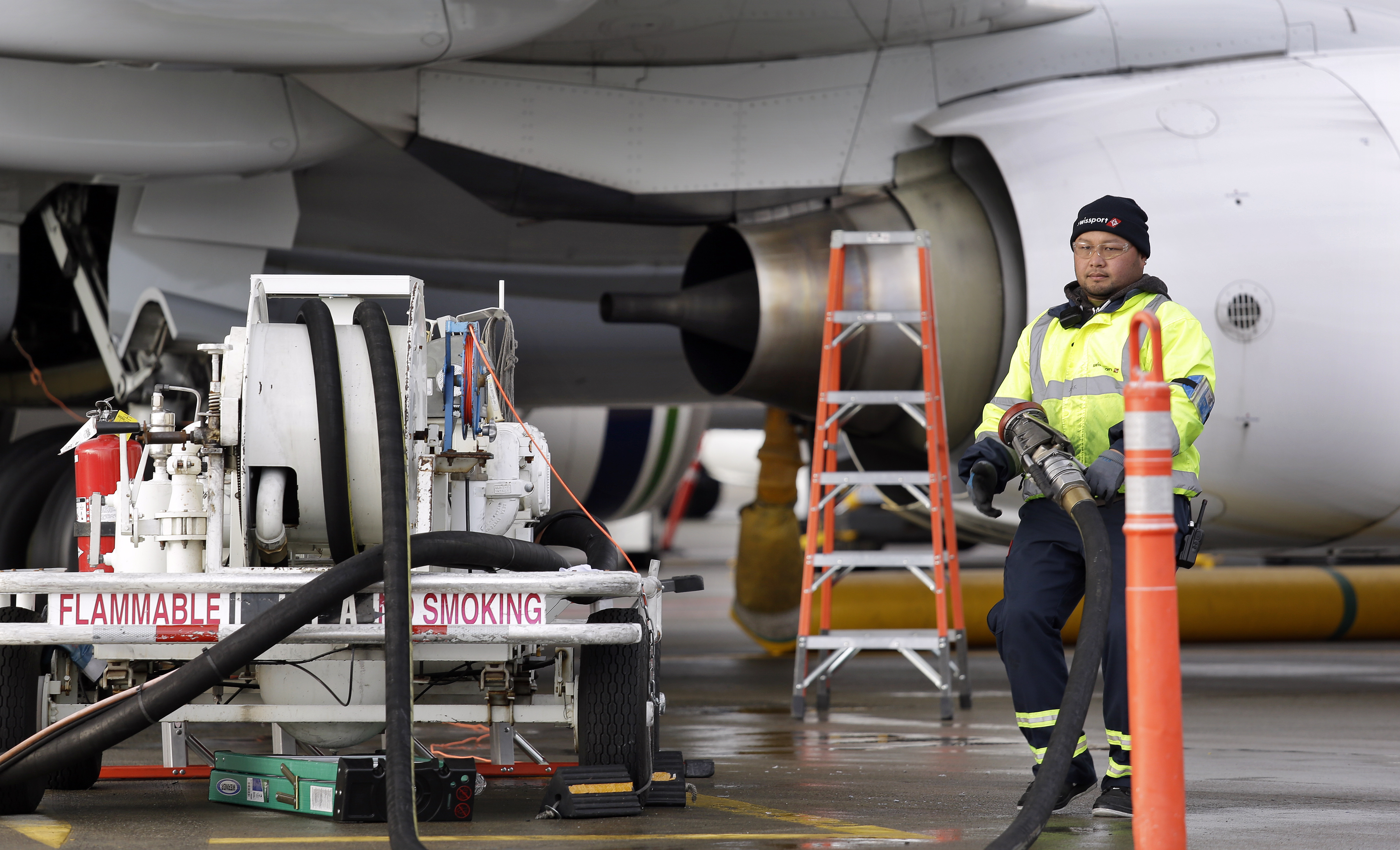 Sea-Tac Airport worker Resky Killion stows gear after pumping fuel into an Alaska Airlines jet on Dec. 16, 2015, when Boeing Co., Alaska Airlines and the Port of Seattle announced Wednesday a study of how to bring more aviation biofuel to airplanes at SeaTac. Executives for the companies and port signed an agreement, saying the study will help stimulate production of alternatives to conventional jet fuel. (AP Photo/Elaine Thompson)

One big aspect of that push would be to have Sea-Tac International Airport become the first American airport to provide significant amounts of biofuels to more than one airliner’s passenger jets. But he also wants to have the state grow the bio-stuff that is transformed into biofuels. And manufacture the biofuels that jet airliners can use.

Besides the environmental benefits of reducing greenhouse gas emissions, the Northwest has the potential for 1,900 biofuel-related jobs in Washington and Oregon, plus another 700 jobs in Montana, said Ralph Cavalieri, who is head of the Richland-based Center of Excellence for Alternative Jet Fuels & Environment.

The science is there. The technology is in the ballpark. The idea of trimming greenhouse gases from jet exhaust has a solid foothold on imaginations in the airline and military worlds. Last November, Alaska Airlines flew its first cross-country jetliner trip from Seattle to Washington, D.C., using wood-based biofuel.

But the big bugaboo is economics.

Who will pay for a potential $1 billion biofuel plant in Washington? How do you convince Northwest farmers that it would be smart to grow crops for biofuels instead of crops for food? How do you get biofuels cheap enough to legitimately compete economically with petroleum-based jet fuels?

“The problem is multi-faceted,” said Brian Bonlender, director of the Washington Department of Commerce at a recent aviation biofuels conference in Seattle.

A 2016 U.S. Department of Energy report concluded that it’s possible for biofuels — derived from plants or wood wastes such as leftover slash of downed trees —  to eventually replace 30 percent of the United States’ 2005 petroleum consumption.

Over the next 33 years, the airline industry and the federal government are aiming to cut commercial aviation carbon emissions by roughly half. Currently, jet airliners produce about 2 percent of the Earth’s greenhouse gases, which could increase to 5 percent, said a July report on Sea-Tac’s biofuels potential from the Rocky Mountain Institute’s Carbon War Room and Swedish aviation biofuels supplier SkyNRG.

When biofuel is used, it is blended with regular jet fuel. The Commercial Aviation Alternative Fuels Initiative — a national coalition of airlines, biofuel producers and government agencies, hopes that within three years — it can produce 1.7 percent of the jet fuel used nationally.

So far, only two commercial airports — in Los Angeles and Oslo, Norway — have set up permanent jet biofuel blending operations. In Los Angeles, only United Airlines uses the biofuels, which is supplied by AltAir of Seattle.

AltAir had originally produced biofuel for aviation in Hoquiam but that production moved to what was an unused refinery near Los Angeles. Building a refinery from scratch anywhere close to Sea-Tac would be extremely expensive, perhaps $1 billion to $1.4 billion, according to experts. “We don’t have a mothballed refinery close to the Seattle airport,” said Carol Sim, environmental affairs director at Alaska Airlines.

And this is where all the economic hurdles show up.

In 2015, biofuels were two to three times as expensive as petroleum-based fuels, which is a huge practical factor against using biofuels for jets, said Charlotte Hardenbol, senior business development director for SkyNRG. That is actually a big improvement over just a half-dozen years, but she said, “The airline industry is a very thin-margin industry.”

Another wrinkle is that biofuels do not have the federal government subsidies and tax breaks enjoyed by the oil industry, according to Peter Moulton, state Commerce’s bioenergy coordinator. “We’ve heavily subsidized the petroleum industry,” Moulton said in a late 2016 interview.

However, if enough byproducts markets are identified from the technology developed to process aviation biofuels, the extra revenue would make biofuel refineries more economical for investors, said Cavalieri, who is also Washington State University’s associate vice president for alternative energy.

The purpose of the report from the SkyNRG-Carbon War Room was to identify ways for Sea-Tac to be able to provide jet fuel that is 1 percent biofuel to all of its jets. The target date for reaching a 1 percent mix is still up in the air, as is any Sea-Tac timetable for achieving a greater percentage of biofuel.

The report noted that taxpayer-supported agencies — such as Sea-Tac's operator, the Port of Seattle — cannot directly buy biofuels for private airlines. However, the report suggested a number of ways that public agencies could indirectly help private corporations buy, produce and store biofuels. For instance, to support environmental improvements through a biofuels program, a fee could be imposed on parking or vehicles entering the airport, or the airport might lease land or roof space for solar production.

The report noted that the development of local processing of aviation biofuels is a “major hurdle,” but it suggested the port could play a big role in overcoming concerns about the citing of fuel production facilities.