Lessons about Seattle from the Cooper's hawk 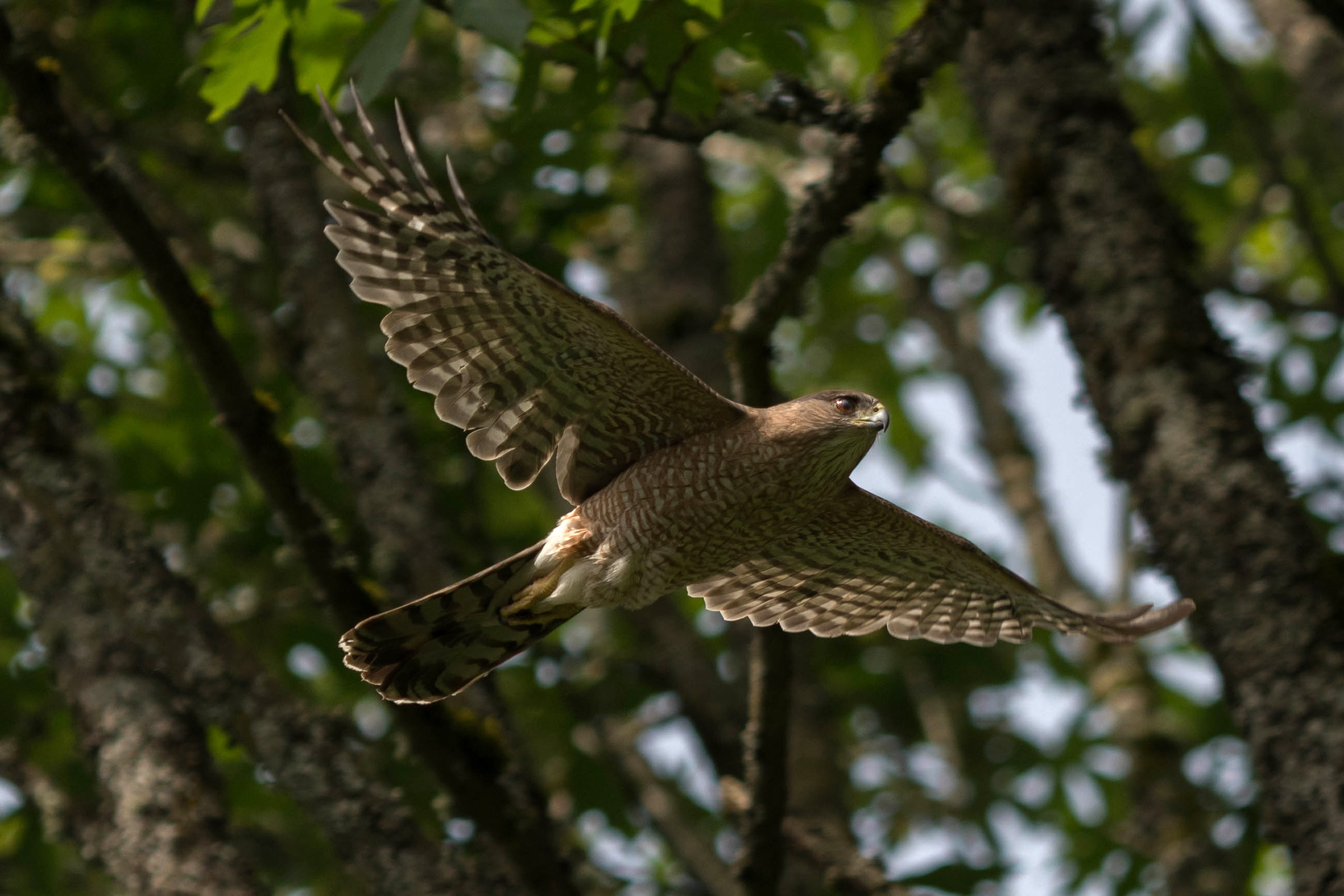 An adult female Cooper's hawk flies near her nest.

To visit the Queen of Seattle one must first step over empty beer bottles and condom wrappers before skidding down a dirt slope and traipsing over a massive tangle of bindweed. The Queen is not holding audience today, but her ‘kids’ are there to welcome Ed Deal.

The Queen is a Cooper’s hawk, fierce, deadly and beautiful. Deal, a raptor expert, points out her nest, a large, solid mass of branches perched near the top of a tall, scrawny alder. The tree sits in a ravine, not far from Longfellow Creek in West Seattle, and the Queen has ruled this location for the past eight years, her current ‘kids’ as Deal refers to them, flying around the small forest.

The Queen of Seattle is one of dozens of birds monitored by Deal as part of an ongoing study documenting Cooper’s hawks in Seattle. The self-funded, volunteer-run study Deal now manages with his partner, Martin Muller, was begun in 2003 by Jack Bettesworth. This is Deal’s sixth year documenting Seattle’s Cooper’s hawks with help from volunteers around the city and he is passionate about these birds.

Over the past 14 years, the study has been slowly revealing a picture of the population of a bird that is relatively new to the city. It has also shown what this bird can tell us about the future.

Each year Deal and the other volunteers count as many nests as they can find in Seattle, then monitor every nest to document how many young each produces. If possible, they will catch and band both juveniles and adults. In Deal’s first year, they monitored 22 nests. This year they have 40. Deal admits they’re getting better at finding them, but the number of nests is also growing.

The increasing number of nests in Seattle is part of a national trend of the Cooper’s hawks’ move to cities. Prior to the 1990s, the hawks were relatively rare in urban landscapes before their numbers dipped precariously low due to a combined effect of human persecution and DDT. Made infamous from Rachel Carson’s book "Silent Spring," DDT is a pesticide which accumulates in raptors, creating thin eggshells which are crushed by incubating adults.

In the early 1990s, Cooper’s hawks began a natural colonization of cities around the United States. Beginning with Milwaukee, Wisconsin, they are now studied in half a dozen cities, including Seattle.

The ongoing effort to document the number of nests in Seattle, year after year, has created a rich data set, all available at the Burke Museum, and creates a baseline for future population changes.

These population numbers are particularly important when considering potential future impacts from climate and other environmental changes, because Cooper’s hawks are the urban canary in the coal mine. Just as disappearing hawks hinted at a larger problem before research pinpointed the problems with DDT, they have shown they are a bellwether for future change. This time, Deal and others are paying close attention.

A feeding for the masses

Cooper’s hawks adapted to cities because they found a landscape rich in species like house sparrows, starlings, pigeons, rabbits and rats. They also tolerated the small forest patches for nesting.

The amount of biomass required to feed the city’s Cooper’s hawk population is staggering. Seattle’s males will feed their collective young about 160 birds or small mammals each day. Over five to seven weeks that adds up to roughly 7,000 animals. Not to mention the prey required for the adults to feed themselves as well.

Out early at Lincoln Park in West Seattle, Deal is hoping to observe some feedings. Spotting scope and tripod hoisted up over one shoulder, he marches into the trees and with experienced precision stops in the best place to view the nest. He immediately finds a juvenile hawk sitting on a branch nearby.

“It has a full crop already,” Deal exclaims as he points out the juvenile’s bulging neck through his scope. He explains that the birds have a pouch in their neck where food is stored before digestion — a full crop is a sign this bird has had its morning feed.

“This is why we get up early,” Deal explains. “This is when they're active.”

Despite the full crop, the juvenile starts making a whistling call, its tail slightly wagging as it does so. The call is echoed around the trees by two other ‘kids.’

"I love the food begging noise, ‘Moooooom, I'm hungry,’" Deal admits as he watches them skillfully fly through trees overhead.

“Hold still, damn it,” He pleads as two chicks swoop around the trees, artfully dodging branches. He can see three at any given moment, but knows from experience how hard they are to count.

Deal moves the scope to focus on the empty nest. White, fluffy down snagged on the branches and white splats of bird waste, or ‘hawk chalk’ are signs Deal looks for at nests to determine if it’s active.

This year, with the long hot and dry summer, the chicks are typically fed at dawn and by 9 a.m. they’re resting. Deal adopts the birds’ schedule and by afternoon he’s also relaxing, but with a beer.

However, this won’t be the case in this nest. As he often does, Deal witnesses the kids standing on food, with a full crop — and still begging for more. The juvenile’s begging whistle is interrupted briefly by a single 'kek' call from the adult male who has arrived with prey. As the female takes the prey from him, he’s met with a severe escalation in whistling from the juveniles.

“Order is still prevailing at this nest,” Deal declares as the female drops the prey in the nest and the chicks descend to fight over the meal, soon chasing each other around the small tree grove.

The female returns to her hidden perch and aims another "wah" at the male, a call Deal interprets as “that was good slacker, but the kids are still hungry, go get more.”

With all three juveniles flying, Deal updates his current tally to 127 fledged Cooper’s hawks for the year.

A lifetime fascination with a prophetic bird

Deal, now retired from his day job as a physical therapist, is an independent researcher and has studied raptors for 24 years. He began training in raptor trapping and banding in 1992 and has completed extensive volunteer training at hawk banding sites around the country.

Deal now works exclusively in the city and has an appreciation for urban field work — he doesn’t have to travel far and there are plenty of cafes where he can take coffee breaks while going over his data. He says it’s important to study how birds adapt and evolve in human-altered landscapes.

"Six years ago I would never have believed there were over 40 nesting pairs within the Seattle city limits,” Deal says. “While not all bird species survive in human environments, Cooper's hawks are thriving.”

An expert on Cooper’s hawks and peregrine falcons, Deal tracks and monitors both in Seattle, the latter since 1993. During the warmer half the year, he is up before dawn and heading to the first of four to five visits each day. The rest of the year, he spends the rainy days studying Google Earth to find potential nesting locations to visit the next spring. The hard work brings rewards and he says he has enjoyed “the challenge of parting the curtains for a glimpse of the daily lives of this secretive hawk.”

Many nests are watched closely by neighbors who are particularly attentive to the hawks’ comings and goings. Deal has met many neighbors around Seattle who often share their observations and passion for the birds. Some even invite him into their homes to survey from their windows.

Neighbors in a West Seattle neighborhood were disappointed this year at the failure of a nest which had eggs. The female abandoned the nest around the same time a male hit a nearby window. He recovered at PAWS, but two juveniles this year have already been killed. Window strikes are common, killing an estimated one billion birds every year.

More than a few of his birds wind up dead prematurely and Deal documents each death, adding to a larger overall environmental picture of the city. Rodenticides used to combat Seattle’s persistent rat problem are a direct threat to the Cooper’s hawk population. When a poisoned rat crawls off and dies, hawks pick up an easy meal, but end up ingesting the poison. Deal worries that hawks found dead in Seattle have suffered this fate, and that others will follow.

The Queen of Seattle was bestowed her name by Deal, in part because she has been there since the study’s beginning and has breezed by the average Cooper’s hawk 6-year life span. The Queen has already lived long, at least 10 years.

Seattle’s Queen is unique in another way: While three quarters of Cooper’s hawks make a new nest in their territory every year, she has used the same exact nest — now a tower — the last eight years.

During the Queen’s reign she has successfully fledged 34 chicks — and counting. This year is the second in a row she’s raised five young. She’s become a constant presence in work that often presents Deal with death and loss. He expresses hope she returns next year.

With his current visit over, Deal nods his head to the flying kids, “Thanks guys, appreciate the show.” 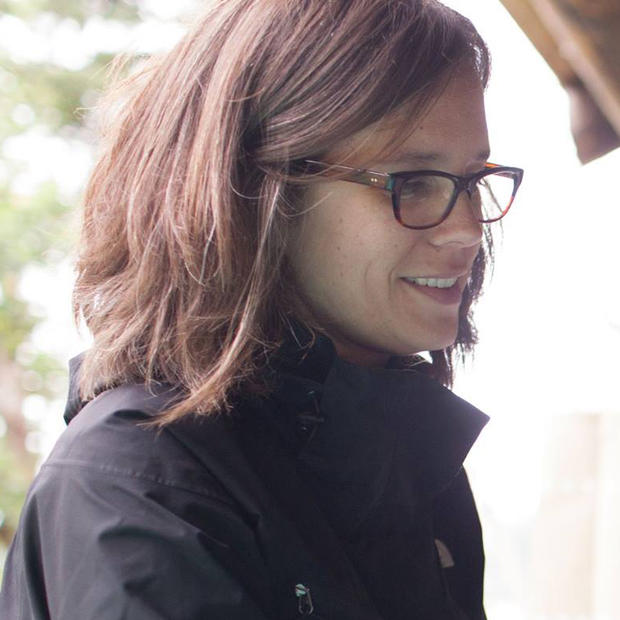 Kelly Brenner is a naturalist and writer based in Seattle. In 2009 she founded The Metropolitan Field Guide, a website about urban nature. She writes freelance articles focusing on natural history and is working on a book for Mountaineers Books. She earned a bachelor’s degree in landscape architecture from the University of Oregon and a certificate in non-fiction writing from the University of Washington. Having lived in the Pacific Northwest all her life, she has explored much of the region investigating the local flora and fauna. On the side, she photographs the natural world.