I sat in protest with an athlete in the '90s. It's complicated 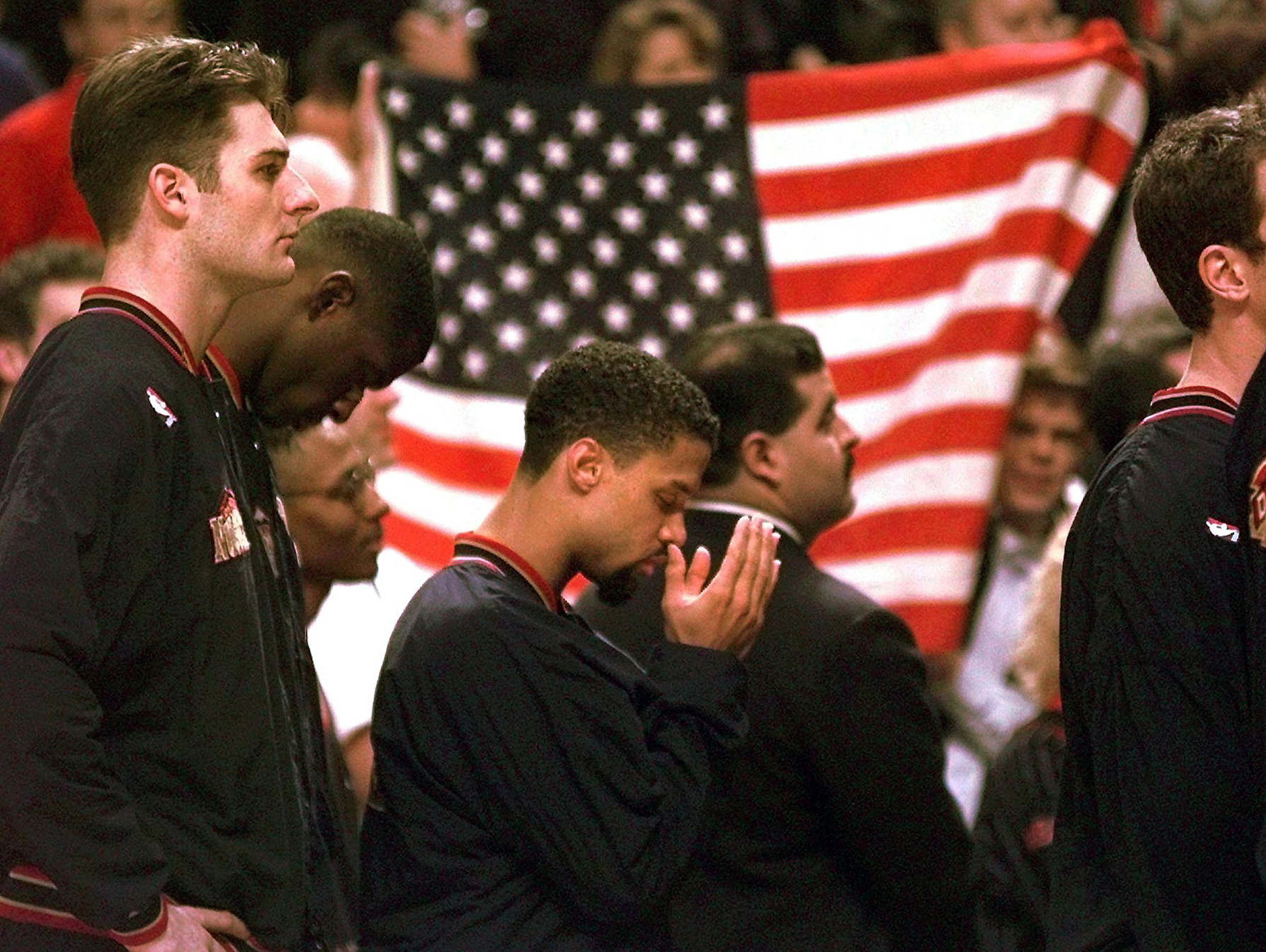 In this March 15, 1996, file photo, Denver Nuggets guard Mahmoud Abdul-Rauf stands with his teammates and prays during the national anthem. This was Abdul-Rauf's first game back since he was suspended by the NBA on March 12, 1996, for refusing to participate in the national anthem pre-game ceremony.

Twenty-one years ago, I stood with — or, rather, sat with — a black, Muslim NBA player who during the 1995-96 season stopped standing for the national anthem. He did so to protest the way this country oppresses and discriminates against people like him. Being Japanese American (and, I guess, “woke” before such a condition even had been diagnosed), I joined Mahmoud Abdul-Rauf in what I considered a silent, respectful protest. I wrote about it in my NBA column for The Seattle Times.

All the subsequent death threats and rancorous letters once filled a fairly large cardboard box. Now I just keep the “best” of them: Among them, an offer to send me back to Japan in a pine box, and a creative certificate naming me a “Horse’s Patoot.” I also have the memories — of subsequent NBA games with Seattle Police keeping a closer eye on me, as requested by my newspaper, which received phone threats against me. The only time I felt truly threatened was when surrounded by a liquored-up crowd in Houston whose belligerence teetered on becoming actionable.

I wish I had something new and profound to say about the crescendoing protests in sports, but the best I can do, based on my experiences, is pronounce them as “complicated.”

The past few years, I’ve enjoyed the weekly ritual of watching our local NFL team, the Seahawks, with my parents. My father is a Korean War veteran and my mother is a Japanese immigrant and naturalized U.S. citizen. So their perspective is charged; they both put in work to be in and defend this country. As more players were shown one recent Sunday to be kneeling during the national anthem, my mother complained that they were disrespecting the flag.

Part of me understands what she was saying, and why, but I’ve always thought the notion of disrespecting — or, even, pledging allegiance to — a flag as odd. I mean, how can one disrespect an inanimate object? It’s a piece of fabric that we are allowed to burn or otherwise destroy or desecrate, if we want — a right affirmed and reaffirmed by the U.S. Supreme Court.

Of course, it’s what the flag stands for that breathes life into it. I understand that. A few months ago, during a conversation about race at Rosie the Riveter National Historical Park, near Richmond, California, an interpretive ranger asked me to help him take down the flag. It was the end of the day. I agreed, but must admit it flustered me. Retiring the flag for the day is ceremonial, and the customs rushed back to me. I was a Boy Scout; my father was my scoutmaster. When the ranger asked me to execute the last, alternating diagonal folds, I did so nervously. When he handed me the flag to carry inside, I felt as if I were transporting fine china.

On the other hand, one of the more disconcerting moments of my summer occurred at a jam-packed main stage at the Washington State Fairgrounds. The occasion was the 75th anniversary of the Puyallup “assembly center” for American Japanese during World War II. When everyone, including dozens of former prisoners, rose for the national anthem and the Pledge of Allegiance, I felt conflicted — mostly, that it was wrong. Dozens of those standing with hands over heart had once been told they were at Puyallup for their own protection. Then, they were housed in animal stalls and made to notice that the guns were trained inward, toward them.

During those moments, I see the American flag as stained, not only with American Japanese imprisonment, but also with the theft of these lands from Native Americans, the enslavement of blacks, the exclusion of Chinese and other Asians, and the inequitable migrant work of Latinos. The mostly black players of the NFL see the blood of their own, shot by police sworn to protect them. When their president invoked the B-word against a don’t-talk-about-my-momma culture, he created more Sunday kneelers than the pope himself.

Though we can tick off a handful of athlete activists — in the main, Muhammad Ali, Tommie Smith and John Carlos from the Civil Rights era — sports has been slow to the political table. In a way, at least. People often rail against the intrusion of politics into sports, which offer respite from the harsh realities of their lives. But that’s forgetting that we’ve been playing the Star Spangled Banner at sporting events since Major-League Baseball started the tradition during World War II. Or that among our most salient Olympic memories are of the tear-streaked athlete, standing on the podium, with flag rising and anthem blaring.

If the insertion of flag and anthem is not political demonstration, I don’t know what is.

As cloying and worshipful as they often can be, sports fans also can demonstrate massive insensitivity toward athletes of color. A few years before it rendered my anthem protest so trepidatious, Houston was a place where I witnessed fans taunting an all-black Sonics basketball team with bananas and monkey calls. While I was a graduate student in New York City, I listened to fans at Madison Square Garden refer to their all-black NBA team as the N-----bockers.

But athletes rarely talked about instances like those. I covered Michael Jordan in the NBA Finals the year that I sat with Abdul-Rauf. Jordan was routinely criticized for his apolitical public profile, and he’d famously responded, “Republicans wear sneakers, too.” That the current generation of athletes has become activated should not be altogether surprising. Millennials are the generation of the involved; they act on the seeds planted in many of us, that protest makes us feel more engaged with a country born from dissent.

We can’t exactly say that the stakes have escalated.

Sports and politics remains a complicated and evolving brew. Professional basketball, both the NBA and WNBA versions, offers the freest rein of dissent for its athletes. Yet, the NBA is the same entity that actually suspended Abdul-Rauf for a game from the Denver Nuggets because of his protest. The rest of us have not come that far in 21 years.

After all, Abdul-Rauf sat through Francis Scott Key’s ditty to object to the treatment of black Americans and Muslims. He’d fit right in today.