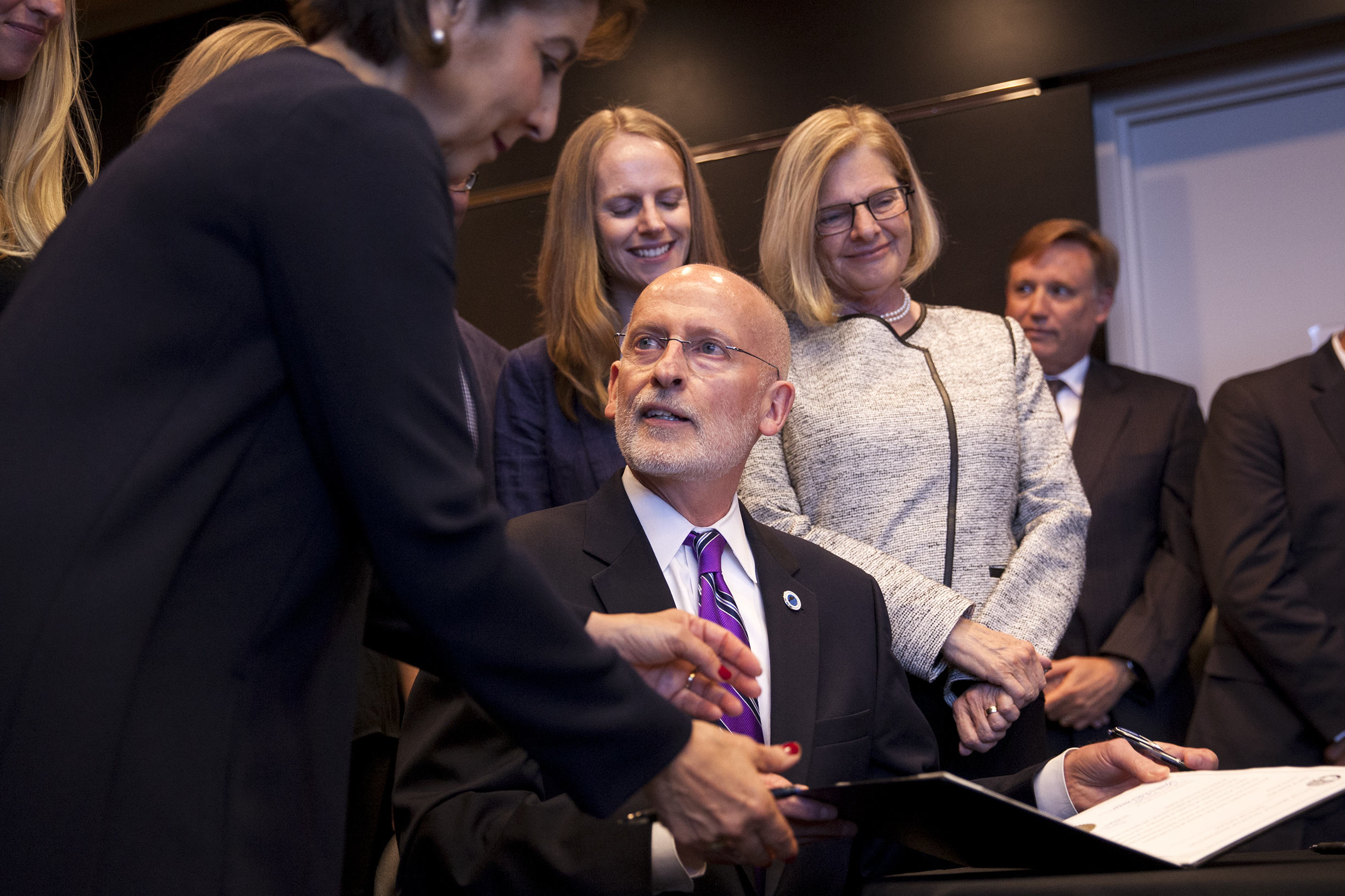 Mayor Tim Burgess, surrounded by his family, is sworn in during a ceremony in The Norman B. Rice Room at City Hall on Monday, September 18, 2017.

For the second time in five days, Seattle has a new mayor. Veteran City Councilmember Tim Burgess was appointed to the office Monday afternoon with a five-vote majority from his colleagues on the Seattle City Council. He was sworn in as the 55th mayor of Seattle Monday evening and will be mayor until Nov. 28, when the winning candidate in next month’s general election — Cary Moon or Jenny Durkan — is sworn in.

Lisa Herbold was absent from the vote; Bruce Harrell could not participate in voting because he is interim mayor; Kshama Sawant voted against the appointment and Burgess recused himself.

Burgess will inherit the job from Harrell who, as Council President, took over when former-Mayor Ed Murray resigned last week after a fifth accusation of sexual abuse, this time from the son of his first cousin.

“This is certainly not the way anyone would have chosen to become mayor of our great city," Burgess said. "It is, however, where we are. I promise to work every day for the next 71 days as mayor to help us heal and move the city forward."

Burgess’ appointment comes as little surprise; he’s retiring this year regardless so does not need to worry about forfeiting his seat on the council to take the mayor’s job. That was one of the reasons why Harrell chose not to continue serving as mayor.

Councilmember Lorena González could have comfortably taken the position as well as she’s up for re-election this November and would have returned to her seat once either Durkan or Cary Moon is sworn in.

But she pulled herself from consideration, releasing a statement Monday morning declining the job before she was even nominated. “I remain focused on championing my priorities for public safety, working families, domestic violence and sexual assault survivors and immigrants and refugees through the impending budget season, which will begin in earnest on September 25, 2017,” she said.

González, in fact, nominated Burgess to be mayor. "I’ve had an opportunity to both agree and disagree with Councilmember Burgess," she said. "It’s a relationship I've really truly valued."

Burgess is well-suited to take over the office a week before the executive must introduce its budget. The principal job of the interim mayor will be to deliver that budget to the City Council and, as chair of the budget discussions for the council, Burgess is perhaps more familiar with its details than anyone outside of the mayor’s office.

"I will return next Monday afternoon to deliver the 2018 budget for your consideration," Burgess said. "It will be balanced. It will be fair and just. And it will uphold the progressive values of Seattle.”

Speaking in a press conference after the vote, Burgess acknowledged the budget would cut close to what the Murray team had already put together. "Most of that work was completed prior to me moving to this office," he said. "We’ll make sure we can make whatever adjustments we can and then I’ll be looking to my colleagues on the council as they give consideration to that budget."

When asked if he would consider adding more money for sexual abuse victims, as Harrell had hinted he might do, Burgess deferred to the council. Burgess was among the majority of the city council who did not call for Murray to step down before the emergence of a fifth accuser.

Speaking to the accusations against Murray that have rocked Seattle for months, Burgess referred to the scandal as a "crisis of the last several months. That was a painful experience for all of us and for the many people in our city and our region who themselves are survivors of sexual assault. But that’s behind us now."

Burgess — a former police officer, radio reporter and head of the Ethics and Election Commission — was elected to the City Council in 2008. In that period, he’s had a way of attracting strong feelings about his role as a council member, both good and bad, second only to Councilmember Kshama Sawant.

His critics like to paint him as a Republican in hiding, often pointing to his vote on an ordinance to curb aggressive panhandling, his supporting the repeal of an employee head tax and his frequent clashes with Sawant as proof. In voting against Burgess, Sawant cited the panhandling ordinance as well as his support for the proposed North Precinct police station. His budget, she said, will be "yet another business as usual budget with a bloated police department."

His fans, on the other hand, point to his work passing Seattle’s universal Pre-K measure, his work on police reform and his tax on gun sales, among others. “As the City Council veered to far-left identity politics in recent years, Burgess often stood alone — not because his positions were conservative, but because he asked what the city was really trying to accomplish,” wrote The Seattle Times Editorial Board after he announced his retirement, celebrating his resistance to “efforts by the council’s super-left-wing to micromanage businesses.”

The rest of the council offered their full-throated praised to Burgess. "Of all the council members here, I’ve learned the most from you," said Councilmember Debora Juarez. "I appreciate that your word is always your word. When you say you’re going to do something, you do it."

Burgess’ ascendancy to the seventh floor sets off a chain reaction of new appointments. For one, Councilmember Herbold will become the council’s new budget chair. She is widely seen as further left than Burgess and could change the council’s approach to how it funds responses to homelessness or affordable housing.

But she’s also widely respected as experienced and thoughtful — as a longtime aide to former-Councilmember Licata before her own election, she has more City Hall experience than anyone in the council’s second-floor hallways. Speaking last Friday, Councilmember Sally Bagshaw, who is not always politically aligned with Herbold, said she would be happy to have her run the discussions.

When it comes to filling Burgess’ vacated council seat, several names have come up for consideration, including John Okamoto, who filled Sally Clark’s seat when she stepped down from the council in 2015, and former Councilmember Nick Licata. In an email Monday, Licata confirmed he was interested.

Further, Councilmember Kshama Sawant’s office has been in preliminary conversations with members of the Seattle Peoples Party, whose candidate for mayor Nikkita Oliver fell just short of making it through the primaries. Sawant staff member Ted Virdone said, however, that the question of whether Oliver or someone else from the party would apply is for them to decide. Oliver declined to comment.

The council may decide to appoint someone through a vote at the full council meeting within the week or could take its time finding applicants.

When Clark stepped down, the council took a month to find a replacement, accepting applications, culling the list and finally appointing Okamoto. But with the tight timeframe, it’s likely they will want to move more quickly.

Councilmember González is currently serving as Council President while Harrell is mayor. In a meeting Monday morning, she said she would defer to Harrell to decide how the process should unfold when he returns to his seat, making it likely the council replacement will not be decided today.

Council members Bagshaw and Rob Johnson both said they preferred to move quickly and have the council vote on someone without a drawn-out application process.

Sawant agreed that it was important for the council to move quickly, but nevertheless said she favored accepting applications because, she said, she believed it would make for a more open process.