A legal fight begins over proposed coal export in Longview 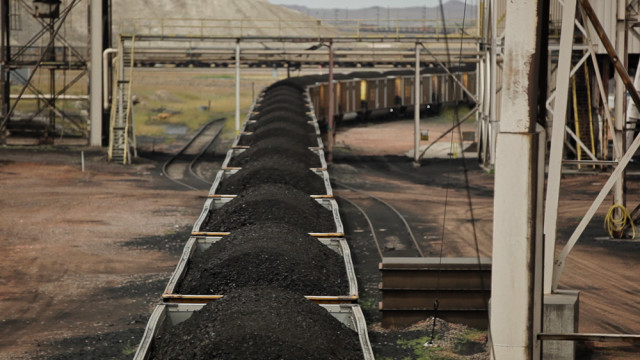 File photo of a coal mining operation in Wyoming. Government officials there want to use state money to help finance construction of shipping terminals in the Northwest to export Wyoming coal to Asia.

Backers of a coal export terminal proposed in Southwest Washington are suing state regulators over their denial of a key permit needed to build the project.

Last month, the Washington Department of Ecology denied a water quality permit to the Millennium Bulk Terminals coal export project in Longview, saying the development would have too many environmental, transportation and cultural impacts.

Millennium CEO Bill Chapman announced Tuesday the company is not only appealing that decision but also suing the agency and its director, Maia Bellon, over a permitting process that has gone “off the rails.”

“What we’re doing here is putting a spotlight on a process that has gone awry,” Chapman said. “The state’s main environmental regulatory agency is trampling over its own fact-finding in order to deny a project that is capable of meeting all applicable environmental standards.”

The company has filed a lawsuit in Cowlitz County Superior Court arguing the state ignored its own findings from an extensive environmental impacts study that concluded the project would meet state and federal water quality standards. The lawsuit argues that Washington instead made up its own rules to unjustly deny the project.

The company’s legal filing makes the case that the state agency expanded the water quality permitting process beyond legal limits by adding extra considerations, such as the impacts of train traffic.

“What the lawsuit says is there’s no place in a water quality certification for reexamining transportation system impacts,” Chapman said. “Bringing in the train system is just another indication that they’re not working on what they’re supposed to be working on and instead inventing this new process.”

In a media briefing, Chapman accused the Ecology Department and Bellon of siding with advocates in denying the company’s permit, a move he called “a dismaying turn in the polarized discourse spreading across our nation.”

Millennium also appealed the permit denial to the state’s Pollution Control Hearings Board.

The Millennium Bulk Terminals project is the only one of a half-dozen coal export proposals in the Northwest that’s still fighting for approval. It would ship 44 million tons of coal a year to Longview by train and export the coal to Asia in vessels via the Columbia River.

The company needs nearly two dozen state and local permits before it can begin construction. Millennium is also challenging the Washington Department of Natural Resources’ denial of a sublease on state land and is still working to get a shoreline permit from Cowlitz County.

Supporters of the project say the state’s water quality permit denial is an indication that the state has become hostile to fossil fuel businesses that would bring much needed jobs.

“The vast majority of our manufacturing and agricultural products all move by rail throughout the state,” said Mariana Parks of the Alliance for Northwest Jobs and Exports. “Are we to assume those products will endure the same level of scrutiny now? This sets a bad precedent for all future projects in our state.”

Opponents of the project cheered Ecology’s denial of the water quality permit for protecting human health, waterways and salmon, noting that the development would mean filling in 24 acres of wetlands, dredging 41 acres of the Columbia River and sending an additional 16 coal trains per day through Cowlitz County.