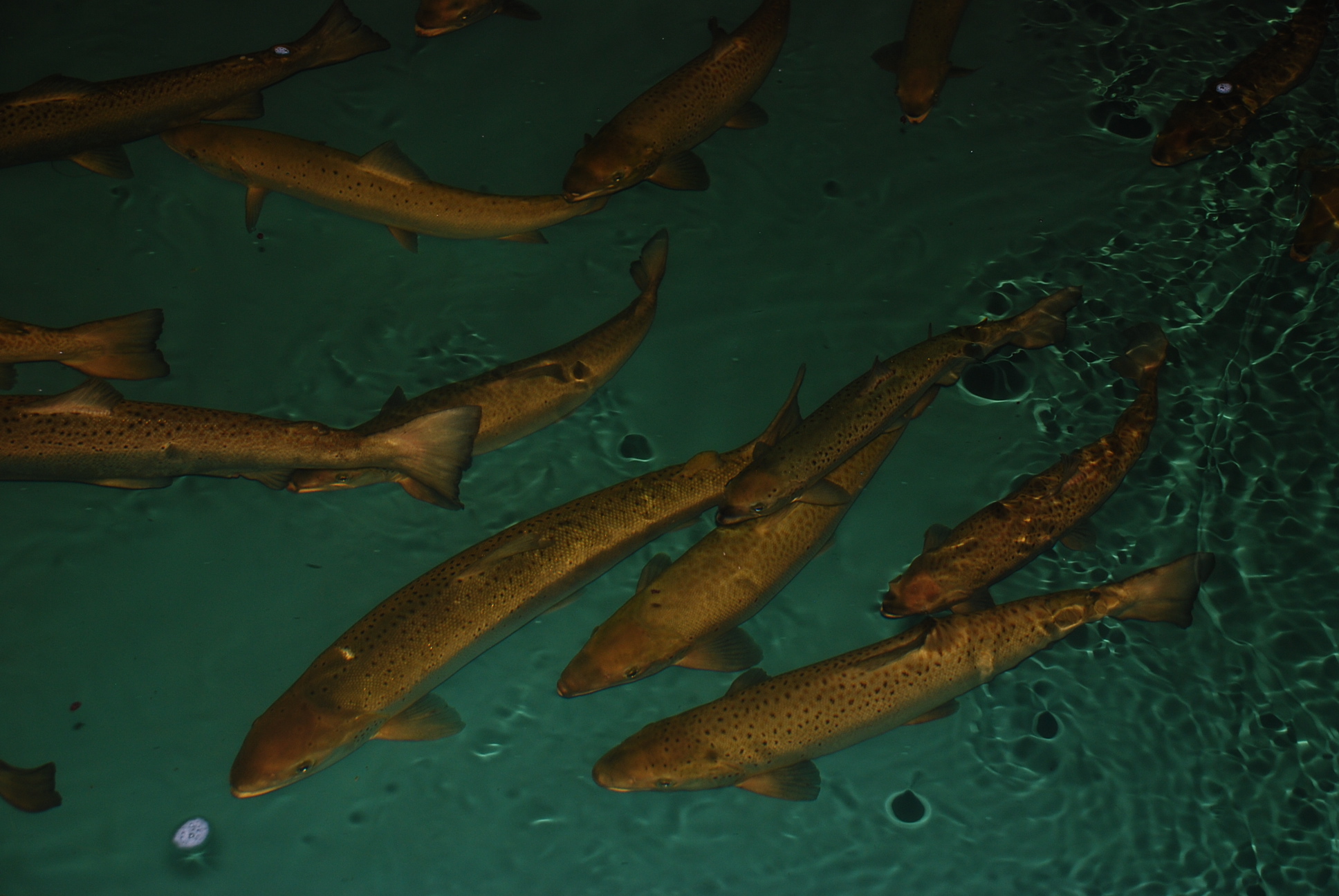 If an Atlantic salmon swims free in the Pacific, is the fish itself a form of pollution? This little koan has a lot of legal and political resonance since the collapse of Cooke Aquaculture net pens in late August set a couple hundred thousand Atlantic salmon loose in Puget Sound.

The Duvall-based environmental group Wild Fish Conservancy has a straight-forward answer to whether Atlantic salmon are pollution: yes. A day after the pen disaster near Cyrpess Island, the Fish Conservancy gave 60-day notice that it intends to sue Cooke under the federal Clean Water Act.

The group's Portland-based attorney, Brian Knutsen, explains that the complaint will say that among other things, the company negligently allowed Atlantic salmon to enter Puget Sound. Cooke defends its operations.

The issue of whether Atlantic salmon should be allowed at all has previously been before a federal court in Seattle, where Cooke ultimately escaped being barred from operations but only after a new federal review. The Wild Fish Conservancy sees the Cypress Island pen collapse as underlining and reviving the questions it had already raised in court about the presence of Atlantic salmon in Puget Sound and Salish Sea waters.

"Raising Atlantic salmon on the West Coast has always struck me as unbelievably stupid," says Carl Safina, a professor of nature and humanity at Stony Brook University. Safina — if the name sounds familiar, he once hosted a 10-part PBS series called "Saving the Oceans with Carl Safina" — says, "The lessons of introduced species were there way before Atlantic salmon were moved [to the West Coast]."

The Wild Fish Conservancy will argue that — as at least one court has already concluded — non-native salmon are indeed pollutants. Legally, that’s not as much of a stretch as it might sound at first. For example, if a freighter discharges ballast water in a U.S. harbor, there's a limit to how many non-native organisms the water can legally contain. Referring to ballast water cases, attorney Knutsen says, "I think it's already established that ... non-native species are pollutants under the Clean Water Act."

The escape was a huge event — and not in a good way. Cooke Aquaculture, which bought all eight of Puget Sound's Atlantic salmon net pen operations from Icicle Seafoods last year, initially said 4,500 fish had escaped, only to have to keep revising the estimates upward. In an Oct. 4 press release, Cooke said that it had accounted for 200,927 fish, including 145,851 fish recovered from the damaged structure, and 49,892 fish recovered through the company’s fish buy-back program, under which fishing operators were paid for hauling in Atlantic salmon. But, since the nets are believed to have been holding 305,000 fish, that means more than 100,000 Atlantic salmon could still be unaccounted for.

Some people had assumed, reassuringly, that even if Atlantic salmon got out, they wouldn't go far. That turned out to be wishful thinking; fugitive salmon soon turned up miles away. By now, they have been caught everywhere from the far Northwest reaches of Vancouver Island to the Pacific Coast and south Puget Sound. Some people worried loudly that the escapees would displace, compete with and even eat young wild fish. Has that happened? Nobody knows, although Cooke has said there’s no evidence of it.

Under the circumstances, it took people by surprise when the Washington Department of Fish and Wildlife announced Oct. 3 that it had given approval for Cooke to  move a million Atlantic salmon from an on-land hatchery to net pens in Puget Sound. The agency noted that it had no authority to withhold approval. Gov. Jay Inslee said he was disappointed that Cooke had chosen to proceed despite a request from his office to withdraw its permit application.

The state Department of Natural Resources said holes in the nets and corrosion of the structure at Cooke's Rich Passage farm off Bainbridge Island put it in default of its lease. If the company doesn't repair and replace the faulty pen segments within 60 days, DNR may cancel the lease. Cooke said it was already complying fully with the terms of its permit. Stay tuned.

Net pens operate in a tangle of regulatory authorities that includes the state departments of Natural Resources, Fish and Wildlife, Agriculture and Ecology, the federal Environmental Protection Agency, National Oceanic and Atmospheric Administration, the Coast Guard, and the U.S. Army Corps of Engineers, plus counties and cities that issue shoreline permits. They also benefit from a state law that orders state agencies to “foster" aquaculture and exempt them from water quality standards.

Still, the EPA had to approve the Washington exemptions, and under the Endangered Species Act, it had to consult at least informally with NOAA's National Marine Fisheries Service about potential impacts on listed salmon and orcas. A finding that fish farms could threaten the recovery of those species would have triggered a formal consultation and required a biological opinion. At first, the agencies didn't decide anything. The Wild Fish Conservancy went to court. In 2008, they quickly decided that the pens wouldn't threaten listed species at all.

The conservancy challenged that. United States District Judge John Coughenour granted the organization’s motion for summary judgment, observing that the federal agencies had disregarded their own science. "When making decisions that require them to 'use the best available scientific and commercial data available,'” the judge observed, "the Fisheries Service and the EPA failed to use recovery plans that the Fisheries Service itself describes as containing the 'best scientific evidence available.'” He set aside their approval of Washington's water quality standard exemptions and ordered them to take another look at whether a formal consultation was required.

The federal agencies had, among other things, simply ignored the government's own orca recovery plan, which noted "compelling evidence that sea lice ... are transmitted from salmon farms to wild salmon." The orca plan said that concerns over net pens "center primarily over 1) marine net-penned Atlantic salmon transmitting infectious diseases to adjoining wild salmon populations, and 2) escaped Atlantic salmon becoming established in the wild and competing with, preying on, or interbreeding with wild Pacific salmon.” In quoting these passages, however, Coughenour noted that the plan "ultimately concludes that improved fish-farming techniques have largely ameliorated these dangers."

The feds did reconsider. They didn't change their minds. Then, a year later, a deadly fish infection called Infectious haematopoietic necrosis (IHN) broke out in net pens off Bainbridge Island, forcing the owners to kill a million pounds of fish ahead of schedule. WFC went back to court, asking a judge to order another reconsideration in light of the outbreak. That case is still working its way through the court. It could get in front of a judge next year.

On Oct. 4, Cooke — which is a defendant-intervener in the ESA litigation — announced that it had concluded the "initial phase" of its response to the pen collapse. “We deeply regret the failure at our Cypress Island farm over the summer, and we are taking every responsible step we can to make the situation right,” said Glenn Cooke, CEO of Cooke Aquaculture Pacific.

In a statement that seemed relevant to the question of whether Atlantic salmon should be treated as pollutants, he added, “On the positive side, there is no evidence that any of the escaped fish from the Cypress Island incident are occupying native fish habitat or depleting native fish food supplies.” None of more than 500 recovered salmon seemed to have eaten; their stomachs were empty, he said.

The Lummi Nation, which has fished in the area forever, wasn't buying it. Chair Tim Ballew II complained in a press release about the company’s holding back on the state Ecology Department’s requests for interviews with Cooke staffers. Ballew also suggested there’s nothing successful about a “recovery effort that leaves more than 100,000 invasive fish in our treaty protected waters.”

Some net pen critics say they don't object to raising Atlantic salmon on Pacific shores; that is, in tanks on land. There, non-native salmon pose no risk of escaping or transmitting disease. Professor Safina considers dry land the only place they should be raised. In fact, genetically modified salmon are only allowed to be raised in dry-land tanks. (Several tons of GMO salmon are currently being sold, with no labeling, in Canada.)

The problem is that raising fish on land puts financial pressure on a company. According to one study, raising Atlantic salmon in tanks on land instead of net pens has about the same production costs but produces only half as much return on investment.

"We grow Atlantic salmon from egg to smolts in modern, recirculation, land-based facilities in Atlantic Canada, Maine and Washington," says Cooke’s vice president for communications, Nell Halse. "We also grow our broodstock [parent fish] for their entire life cycle on land." Based on the company's experience, she says, "We do know that it is not currently possible or environmentally sound to move all commercial salmon farms from the ocean to land."

However, she said, "We can't fully predict where the industry will go in the future."

It's also hard to predict how society, in Washington and elsewhere, will assess the costs. Yes, it's cheaper for a company — and, ultimately, for a person buying fish in a grocery store — to farm the fish in public waters. But, to Safina, "The cost to the larger system, to wild salmon and everything relying on wild salmon, is enormous.”