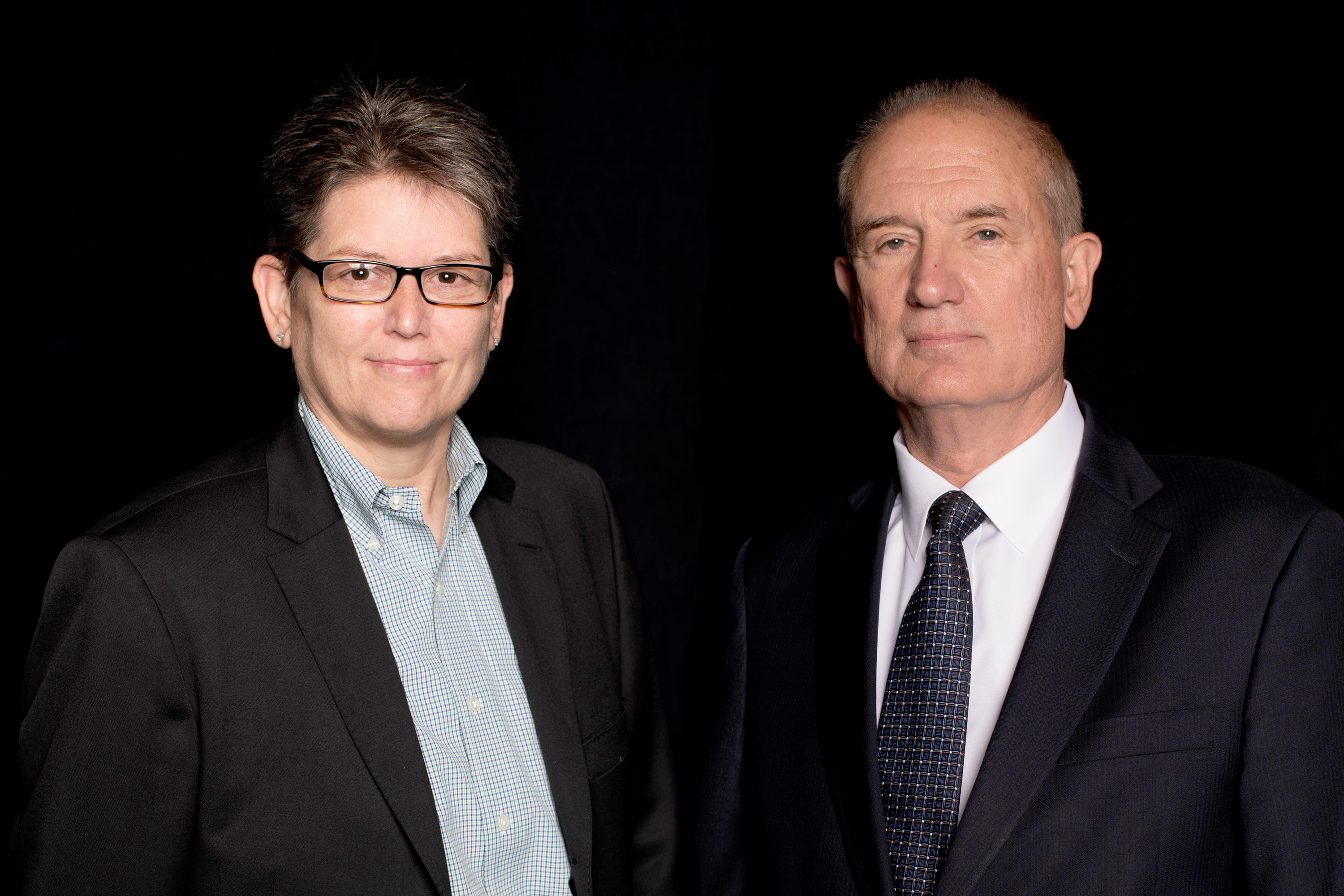 At a time of ferment about law-enforcement practices and arguments surrounding unjustified police shootings, voters are about to pick a sheriff to lead law enforcement for much of King County.

A sheriff who seems to bask in the media limelight and is happy to talk about progressive reforms, yet has faced accusations of serious misconduct, could once again lead the agency. Or voters might opt for the younger, relatively unknown and more reticent female competing with him for the position of sheriff.

While the Seattle Police Department gets most of the attention, the sheriff's office provides police services for the county's unincorporated areas; a dozen cities in King County, including Shoreline and Burien; and Metro Transit and Sound Transit, used by tens of thousands of people daily.

In the Nov. 7 general election, John Urquhart, King County's sheriff since 2012, is facing a challenge from Mitzi Johanknecht, a major in the sheriff's office with 32 years of law enforcement experience.

Both express confidence about winning. According to Washington's Public Disclosure Commission, the two candidates have raised about the same amount of money: approximately $90,000. Seattle Mayor Tim Burgess and Seattle Councilmembers Bruce Harrell and Lorena González are among those who have endorsed Urquhart. Johanknecht has been endorsed by Congresswoman Pramila Jayapal, The Stranger and The Seattle Times editorial board, which concluded that the best case for the election of Johanknecht is “Urquhart himself."  They are both married. Urquhart lives on Mercer Island with his wife; Johanknecht lives in West Seattle with hers.

Before launching her campaign in May, Johanknecht, 58, was a low-profile but ranking member of the sheriff's office. She grew up in Seattle and attended the University of Washington, deciding to pursue a career in law enforcement after riding along with a police officer. She was the first woman to command the Sheriff’s Office SWAT team.

Johanknecht says part of the reason she ran was simply because others in the sheriff's office encouraged her. “It’s not something I ever thought I would do.”

“I didn’t step up to do this for me, I stepped up because it’s time for a change," Johanknecht said. "I’m ethical. I’m honest. I say what I mean.” Johanknecht said she supported Urquhart in his run for sheriff back in 2012 but argued the sheriff hadn't delivered on his promises.

Johanknecht said, “People within the sheriff’s office are afraid of making mistakes.” She attributes the fear to leadership shortcomings on Urquhart's part; The Times, in its endorsement of Johanknecht, also expressed concerns about a poor climate among commanders in the office but conceded that it could stem from Urquhart's willingness to hold police accountable for shortcomings.

Urquhart, 69, also grew up in the city, and was also a student at UW. He has been with the King County Sheriff's Office for the last 28 years and in law enforcement for 41 years.

Within the sheriff's office, Urquhart served in various capacities, including as a public information officer. He is known as someone who can be blunt and outspoken with members of both the public and the press. In August, for example, Urquhart made waves when he tweeted about President Trump's pardon of former Arizona Sheriff Joe Arpaio, calling the decision "unconscionable."

In a recent interview, when asked what he could have done better as sheriff the past five years, Urquhart admitted he wished he had launched some of his policies sooner, such as giving preference to applicants who speak a second language or who have served in the Peace Corps.

Some obvious similarities and differences exist between the two candidates on the issues: Johanknecht has come out against safe-injection sites for drug users. My “heart bleeds for people with addiction issues,” Johanknecht said. But Johanknecht also maintains that additional treatment options are what are really needed. Urquhart, on other hand, supports the sites, saying that although they are “not the solution,” they have been proven to save lives.

Both candidates have come out in support of I-940, an initiative that would heighten training requirements for police officers and make it possible to hold officers criminally responsible for blatant misuses of force. They also both support the department's current practice of not inquiring into an individual's immigration status. Urquhart even went so far as to send out a bulletin to his staff in March, which explained, "If a deputy has probable cause to believe someone is in this country illegally, they still cannot be stopped or detained. Simply being present in the U.S. without lawful immigration status is not a crime. It is a civil violation."

Asked about plans for next year, both Urquhart and Johanknecht say they hope to equip officers with less lethal tools, such as bean bag shotguns. Urquhart also specified that he plans to supply a couple dozen officers with body cameras by Jan. 1 and increase the number of crisis intervention training hours each deputy receives to 40, the so-called gold standard. Patrol deputies and sergeants would also complete three days of implicit bias and de-escalation training.

But controversy has plagued Urquhart’s tenure. Urquhart has been hit with several lawsuits that allege a pattern of discrimination and harassment directed at female deputies. The lawsuits also allege the sheriff has retaliated against those who complain about his behavior. In April, King County settled a retaliation lawsuit, brought forward by a sergeant and two deputies, for $1.35 million. In a recent interview, and in a statement at the time that the settlement was announced, Urquhart said he wished the case had gone to trial instead. Urquhart also said he's reduced the department's payouts on lawsuits overall.

Urquhart describes the legal claims as retribution for his tough stance on officers. Urquhart has, so far, fired 22 deputies for misconduct. Earlier this year, for example, Urquhart fired a deputy who squirted pepper spray on a homeless man's water bottle. At the time, Urquhart described it an example of an attack on the “most vulnerable and powerless segment of society by the most powerful segment of society … a police officer!”

But another, more serious allegation has surfaced against the sheriff: In 2016, The Seattle Times reported that Urquhart directed internal investigators not to document a former deputy’s assertions that Urquhart raped her in 2002 after a night of drinking. Urquhart denies the allegation. While saying he feels badly for her, Urquhart has also pointed out that the accuser has a history of mental illness and has made all kinds of accusations against him, including that he followed her around the country and had someone leave the gas stove running in her apartment, “possibly to create an explosion.” The FBI did not pursue the case and later, the Seattle Police Department and King County prosecutors noted there was insufficient evidence and that the statute of limitations had run out.

In August, the county’s ombudsman’s office concluded that Urquhart had nevertheless violated rules and procedures and should have referred the woman’s allegations to “an outside local or state law enforcement authority for investigation." The ombuds report also recommended that the sheriff's office establish a new policy that requires any future allegations against a top commander be independently investigated. According to Urquhart, the office is working on creating such a policy.

But the headlines about Urquhart haven't all been negative. In 2016, for example, Urquhart made news after re-establishing the department's  Domestic Violence Investigations Unit. “Somebody willing to injure someone they purport to love is willing to do just about anything,” Urquhart told The Seattle Times.

If a recent survey is any indication, however, he's not making friends in the office. The Puget Sound Police Managers Association, a union representing high-ranking commanders in the sheriff's office, recently conducted a survey to evaluate Urquhart's performance from the perspective of captains and majors. Among the comments from the 20 union members (There are a total of about 30 members in the union.) who participated in the anonymous survey:

"His personality and temperament have really shone through during these last few years, which are similar to Donald Trump and Richard Nixon in many ways," one member wrote. The same person, however, explained it was important to "present balance of thought" and said although they're "not a big supporter of [Urquhart] and have a wary eye out... he's not awful. I've agreed with some of the things he's done." Another member called him "incompetent, dishonest, vindictive, will never succeed."

Survey participants also gave Urquhart low performance ratings. Out of 24 questions asked with a scale of 1 (lowest) to 5,  Urquhart never averaged more than a 2.60, just short of a 3, which in the survey equaled "neutral, some improvement needed." When asked if Urquhart "models ethics and transparency ... insists senior leaders be role models of ethical behavior, including transparency," the sheriff received a score of 1.65. On a question about whether the sheriff is "honest in his dealings, predictable in his reactions ... He is approachable and engaged. He is trusted," Urquhart received a score of 1.70. Another question asked whether the sheriff "communicates his vision in terms that cause me to want to follow and to buy into it"; Urquhart scored 1.95.

Scott Somers, a spokesperson for the union, said Urquhart is “fairly Trumpish from our perspective,” referring to President Donald Trump. “I’ve been in law enforcement for 38 years,” Somers said. “He’s had more accusations against him than all the rest of the sherrifs put together.” Somers said he had planned to retire in July, but he "just could not leave the place with this stuff going on.” “I think the worst thing you can do is walk away from a bully,” Somers said. “He is a tyrant."

Noel Fryberger, however, a major in the department and another union member, said there were issues with the way the survey was conducted. Fryberger pointed out that only 65 percent of the members opted to participate. Although the union has not officially endorsed anyone, Fryberger noted that Somers and others had financially contributed to Johanknecht's campaign. "I think it's all politically motivated," Fryberger said, referring to the survey. "It just seems dirty to me." Regarding the sheriff, Fryberger said, "He's not perfect, but he's not bad. I know him, and I trust him." Fryberger also called Johanknecht "absolutely, in no way qualified."

Urquhart, for his part, called Johanknecht's assertion that he has a created a climate of fear among his officers "political theater."

In June, however, the Puget Sound Police Managers Association, accused Urquhart and two top associates of attempting to intimidate Johanknecht and other officers because of her intention to run for office. In court filings, the King County Sheriff's Office admits that, in late April 2017, Chief of Staff Chris Barringer contacted Johanknecht and "requested to meet with her after discovering a make-shift website that implied she might become a candidate for the position of Sheriff." But attorneys for the office assert that "the communication was very brief and friendly."

Johanknecht said if she loses the election, she fully expects to also lose her job simply because she's opposed the sheriff. “I believe that the moment that this would be over, that I would be investigated,” Johanknecht said. Urquhart denies Johanknecht is in any danger of losing her position. "I've gone on the record," he said, "that my opponent will not have to look for another job if she loses."