How Trump mainstreamed the "alt-right" 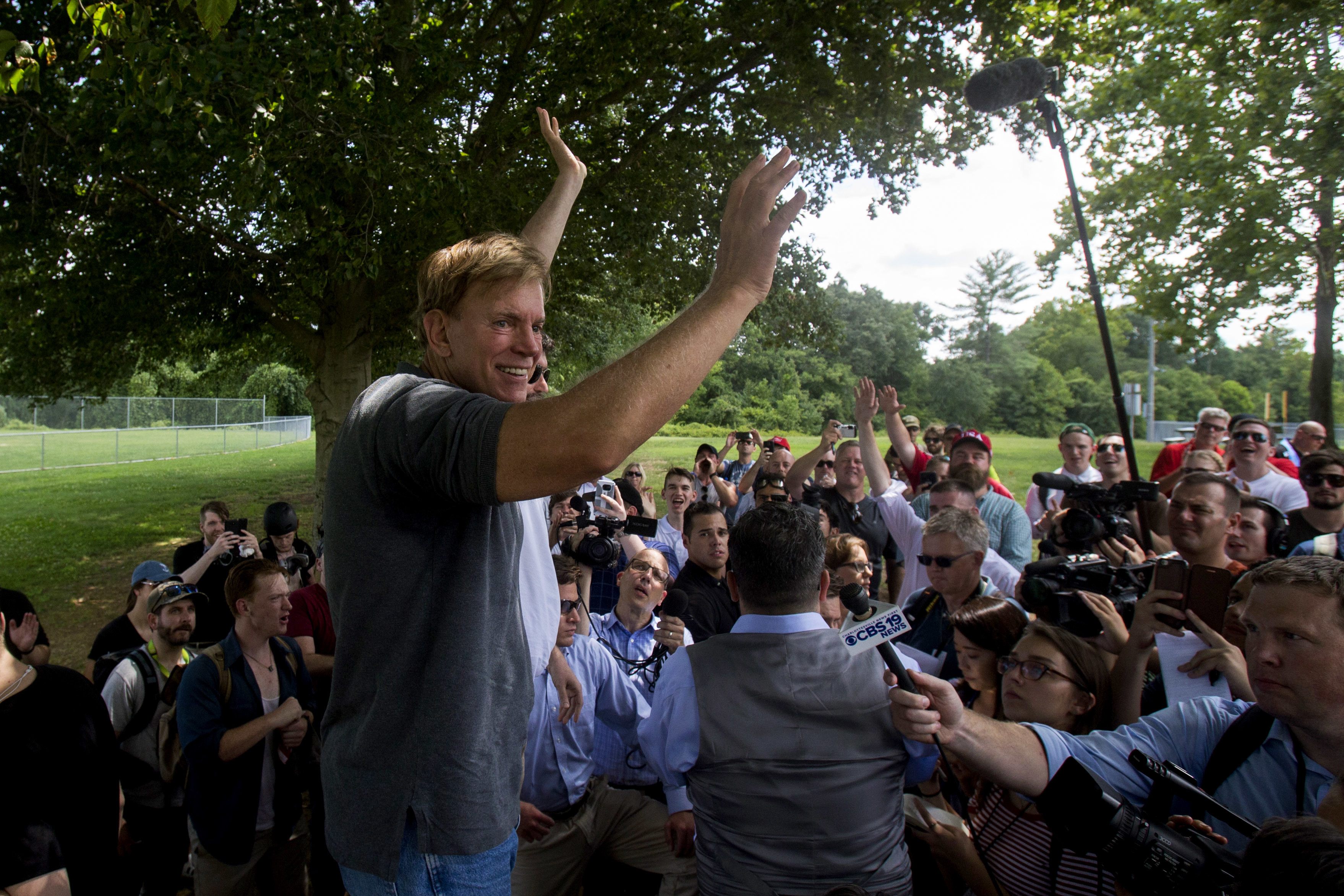 Seattle-based journalist David Neiwert is an expert in the right-wing extremism that has gained notoriety of late. A "constellation of conspiracist, racist, anti-government hate-mongerers" spawned by our charismatic Commander-in-Chief, Neiwert argues in his just-published book, "Alt-America: The Rise of the Radical Right in the Age of Trump."

The book traces the unprecedented evolution of such extremism — white nationalists, white supremacists, xenophobes and others;  its "hijacking" of the GOP; and how certain media personalities helped raise its profile. Neiwert will be interviewed about his book by Crosscut's Knute Berger on Oct. 24 at the University Lutheran Church.

The following is an excerpt from the book:

In the summer of 2016 until the election in November, drivers on Interstate 5 were treated to an occasional sighting of a large utility truck bedecked with bright signs, roaming up and down the Northwest corridor between Washington and Oregon on a regular basis.

State police responded to complaints by explaining that Marr was not threatening anyone with his signs and it was well within his free-speech rights for him to drive on I-5 with the signs. Marr exulted in the effect Donald Trump’s campaign was having on his recruitment efforts. “Steamrolled 6 million miles of semitical correctness this Labor Day weekend. Resistance is feeble,” he tweeted.

He described for his many admirers at the neo-Nazi Vanguard News Network website how he had driven to a book club meeting affiliated with Andrew Anglin’s alt-right website, the Daily Stormer: “The young man who arranged the meeting was the newest convert to white nationalism and testified that Donald Trump had been his red pill. He told me that as a result of Internet searches for articles about Trump, he had stumbled across the Daily Stormer, and as a result of researching links there, things quickly spiraled out of the controlled narrative and he found himself carried away by the flood of truth.”

That was pretty much how it all worked, in a nutshell: Trump was the gateway drug for the alt-right.

Right-wing extremism has always been woven into the American political and social landscape: the nativists, the paranoid conspiracists, the white supremacists, white nationalists, xenophobes, and misogynists. Donald Trump had the charisma to become a national-level coalescing figure for these many threads, and for the first time united them under one banner—his banner. He drew all those elements out of the fringe and into the mainstream of American politics.

Time and again the alt-right read Trump’s winks and nods in their direction as confirmation that he was “on their side.” For instance, after reporting critically on the Trump campaign, Jewish journalists were besieged by a flood of anti-Semitic hate messages on social media and elsewhere. Trump largely chose to remain silent on the matter.

“We interpret that as an endorsement,” Andrew Anglin emailed the Huffington Post. “We support Trump because he is the savior of the White race, sent by God to free us from the shackles of the Jew occupation and establish a 1000 [sic] Reich.” At the Daily Stormer, Anglin headlined one post “Glorious Leader Donald Trump Refuses to Denounce Stormer Troll Army.”

The mainstreaming of alt-right ideology by the Trump campaign also had an invigorating effect on an older generation of white nationalists: David Duke, who used the impetus from the Trump campaign to launch a campaign for the US Senate in Louisiana; Jared Taylor; Peter Brimelow, who now reigned over VDare, a central address of the alt-right; and Rachel Pendergraft, Duke’s successor at the helm of the Knights of the Ku Klux Klan (now the Knights Party) who specialized in white supremacist appeals to women.

Pendergraft endorsed Trump in December 2015. Via email, she told me she attributed an increase in her organization’s membership to Trump. “White people are realizing they are becoming strangers in their own country and they do not have a major political voice speaking for them,” she wrote. “Trump is one example of the alternative-right candidate [whom] Knights Party members and supporters have been looking for. And we feel that through continued grassroots mobilization, more candidates will arise who will speak out for white Christian America.”

In late August, Occidental Dissent’s Brad Griffin mused about the possibility of a Trump win: “Can you imagine a world in which white nationalists have come out of the closet, the charge of ‘racism’ elicits only a ‘meh’ and shrugged shoulders, and we have begun to openly organize?

“Don’t underestimate the power of the presidency to legitimize marginalized people and deviant movements,” he wrote. If Barack Obama can legitimize gay marriage and transsexuals, Donald Trump can legitimize the alt-right.”

Trump’s effect on the radical right went well beyond a mere recruitment boost. His rhetoric empowered extremists not just to angrily revive open expressions of bigotry, such as Jimmy Marr’s truck rolling up and down I-5, but also to open the floodgates of violence inherent in the far right’s ideology and unleash the nation’s dark id.

All the long-suppressed hatreds and resentments, all the deep anger and black fears about the nation and the changing shape of American society, came bubbling up and burst into public view in predictably ugly ways. Trump’s rhetoric seemingly gave permission for the unleashing of an eliminationist flood.

An increasing number of Trump followers seemed to feel empowered by his rhetoric and disdain for “political correctness” to freely express their own bigotry and racial or religious hatred, as well as freely professing the bizarre conspiracy theories concocted by Jones and his “Patriot movement” cohort. Sometimes, they also began acting out violently.

At Trump rallies, violence directed at protesters became so common that some incidents received relatively light media coverage. The violent trend began in the fall of 2015 with incidents in the South, where Trump supporters grabbed protesters’ signs and assaulted them (first, on October 14, in Richmond, Virginia, and then on October 23 in Miami). The violence increased over time, leading his alt-right fans to ardently defend him on social media and dismiss the protesters as worthy of violence. After a March 9, 2016, rally in Fayetteville, North Carolina, Trump disparaged protesters from the stage and a black protester was hit. The alt-right social media maven @RickyVaughn tweeted: “Black militants preemptively kicked out of Trump rally. We wuznt gonna do nuffins, honest! we wuznt gonna protess.”

Trump seemed to encourage the violence, directed both at protesters at his rallies and at minorities generally, by expressly suggesting the use of assaults and threats against them in his fiery rally speeches. When challenged by reporters he then danced around the issue.

In other words, he hewed to the same pattern he had already established in connection with controversial statements.