Washington state could lead in a Russian showdown 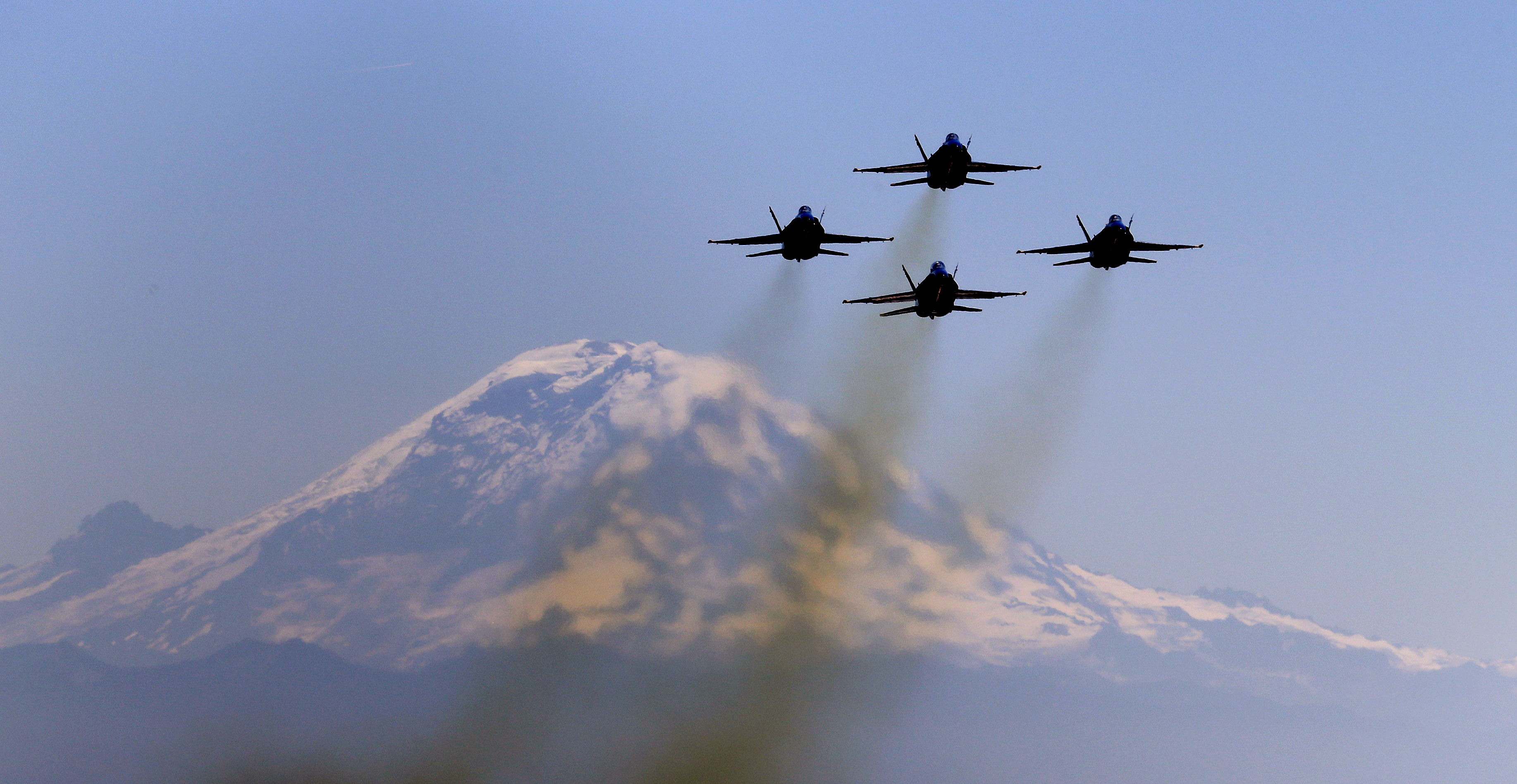 Members of the U.S. Navy Blue Angels fly in formation as they take-off in view of Mount Rainier for an air show practice, Thursday, July 30, 2015, from King County Airport in Seattle.

On Oct. 30, Special Counsel Robert Mueller issued the first indictments from the investigation into possible collusion between President Donald Trump’s campaign and the Russian government. As the investigation evolves, however, we are well-served to keep our eye on the long game: Vladimir Putin’s Russia is waging a 21st-century war against America, and so we require a new foreign policy to deter and defend against this aggression.

Washington state, with our unique cluster of military, tech, and environmental strength, is well-positioned to serve as the tip of the spear for this new conflict.

By undermining trust in our democracy and in each other, Putin weakened us — and he must be contained. The strategy of containment, a middle ground between appeasement and combat, prevailed against the Soviets during the Cold War. Today, as we confront in Russia a resurgent adversary with global ambitions, we must forge a new containment strategy to protect ourselves and our allies. Americans must make far-reaching investments in our cyber and energy capabilities — talent and assets Washington has long been cultivating.

Putin is a powerful enemy. Not only is he the richest person on the planet, worth more than Jeff Bezos and Bill Gates combined, he commands an immense nuclear arsenal, an increasingly modern and effective military, near-limitless oil and gas reserves and the world’s most innovative cyber-espionage capability. Putin also deploys an even more destructive weapon: cynicism.

Confidence in institutions allows democracies to thrive. Only when we trust our government, media, businesses, and civic society can we trust that our disagreements should be settled peacefully. While we may not always get our way, we know our opinions and votes count. Putin undermines this trust by peddling a profoundly cynical view of humanity: elections are fixed, justice is corrupt, and people only look out for themselves; anyone who doesn’t get this is a loser.

In 2016, Putin injected this raw cynicism into a central element of American public life: our free and fair elections. He leveraged our strengths – elections, open society, and a free press – against us through unprecedented cyberattacks, undermining trust in these very institutions. Russian hackers targeted every corner of the country, including our own election websites in Washington. We no longer have the luxury of ignoring Putin, or pretending that his assaults are anything but a declaration of war.

This is 21st-century warfare, and so we need a 21st-century response. In addition to implementing devastating sanctions that will cripple Putin until he ceases his meddling, we can also make a virtue of necessity. The Soviets’ 1957 launch of Sputnik, humanity’s first satellite, inspired a generation of American scientific ingenuity. To that end, containing Russia demands that we invest overwhelming resources to develop our nation’s coding skills and renewable energy capacity.

Although the federal government must necessarily steer an undertaking of this magnitude, Washington is poised to lead on its execution. In addition to Puget Sound’s well-established role as a global tech hub, Washington excels as a leader in cybersecurity education.

Indeed, the National Security Agency has designated six of our state’s community colleges and universities as National Centers of Academic Excellence in Cyber Defense, with the University of Washington earning national recognition as a top cybersecurity school from a number of ranking organizations. According to the Seattle Times, UW’s cyberdefense team, “named Batman’s Kitchen, [is] ranked among the top one percent” in worldwide competitions.

With increased resources, these economic and educational threads can be knit together with our massive military presence – the country’s seventh largest – to create a best-in-world cyberdefense hub. The infrastructure is in place: the 262d Network Warfare Squadron – a cyber operations unit stationed at Joint Base Lewis-McChord (JBLM) – “has been recognized as the best in the nation,” and was singled out for praise from then-Defense Secretary Ash Carter during a 2016 visit to JBLM. The unit is composed of “several hundred citizen soldiers [with] day jobs in the tech industry.” Few other military installations can boast locations so close to so many world-dominating companies with their extraordinary levels of coding expertise.

Moreover, Washington has been laying the groundwork to capitalize on a national cyber surge for years. Among a host of efforts, Governor Jay Inslee and the legislature established an Office of Cybersecurity in 2015, designed to “detect, block, and respond to cyberattacks on state networks… [T]he office works with state, local government, and military agencies.” According to a spokesperson for the office, Washington is “one of the few states” with this type of dedicated cyber agency. If we were designing a system to lead America’s defense against cyberattacks, we could scarcely improve upon the status quo. We await only an infusion of national leadership and resources to grow these capabilities exponentially.

Energy represents this war’s other major front. The U.S. Energy Information Administration reports that oil and gas provide “52 percent of [Russian] federal budget revenues and over 70 percent of total exports.” To deter Putin, future sanctions must hit him and his oligarchs where they eat – the energy sector. We should be prepared for overwhelming sanctions to cause us pain in the form of higher energy prices. This should, however, spur more investment in alternative fuels, aligning our national defense with the other great campaign of our era – mitigating the human cost of catastrophic climate change.

Here, too, our region is well placed to capitalize. Washington already ranks second in the nation in energy consumption from renewables. The legislature created an even more friendly environment this year, passing SB 5939, which "extends incentives to make solar affordable." According to Bonnie Frye Hemphill, Policy and Partnerships Director for A&R Solar, a Washington-based solar installer, “Washington is already a leader in renewable energy. With a federal focus on clean energy jobs, we’re in a great position to build Washington’s economy and energy independence.”

No state, of course, conducts its own foreign policy; a national effort is necessary to address our national defense. More than most, though, Washington can effectively marshal tens of billions of dollars in private-sector and defense funding required to protect our democracy, enhancing at once our economy and our security. In the meantime, our elected officials can continue working with education, tech, and energy leaders to further “prep the battlefield” in advance of a foreign policy shift that recognizes the danger Russia represents.

During his inaugural address in 1961, President John F. Kennedy cautioned that the Cold War would be a “long, twilight struggle.” But he also stood in the tradition of American optimism, and knew we would find prosperity, opportunity, and national meaning from the challenge. “The energy, the faith, the devotion to which we bring this endeavor,” he said, “will light our country and all who serve it – and the glow from that fire can truly light the world.”

Russia’s renewed aggression provides us an opportunity to once more bring light to our country and to the world. If the nation decides to embark on this new endeavor, Washington state stands ready to provide the first spark.