Who Durkan chose for her transition — and what it may mean 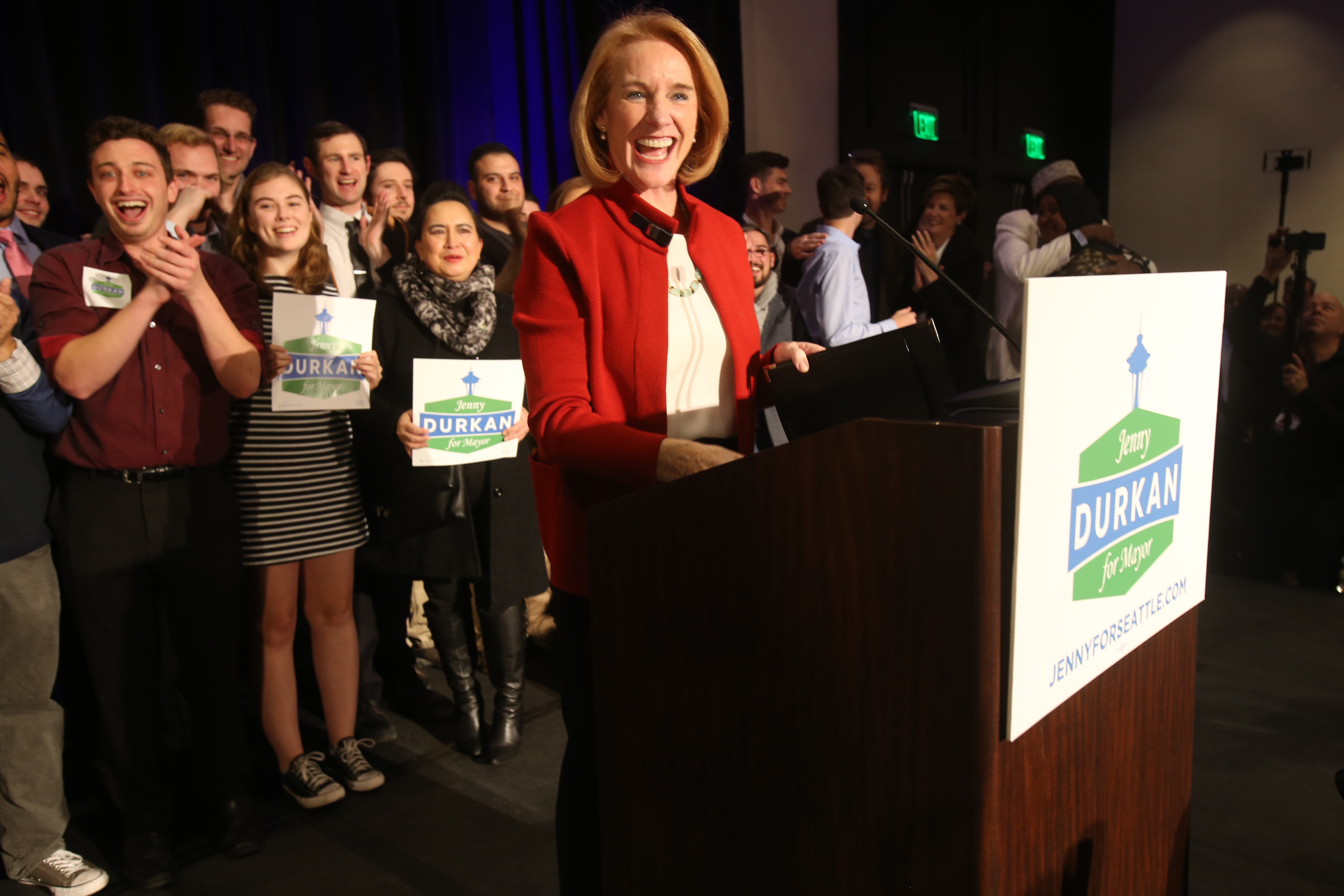 Jenny Durkan speaks at her election night party after she is elected Seattle's Mayor. (Karen Ducey for Crosscut)

In the hours following her election, Mayor-elect Jenny Durkan looked to both her decisive victory and that of Teresa Mosqueda’s for Seattle City Council and saw a mandate: “She was much more about how do we pull together to get these problems done than her opponent,” Durkan said of Mosqueda’s election.

“And I think the margin of her race showed very clearly voters want that kind of approach to government.”

In her first major announcement as Seattle’s soon-to-be chief executive, Durkan outlined a 61-person transition team that reflects her perceived mandate for practical solutions. The team’s members come from a broad slice of different — and occasionally opposing — sectors of Seattle.

"Our transition team reflects the best of Seattle," Durkan said. "To solve our affordability, housing and homelessness crisis, we need urgent action and innovative ideas. These community leaders and policy experts from all parts of Seattle will develop key achievable policy recommendations to make differences not just in the short term, but which help build a progressive, innovative and inclusive city for the next generation."

The inclusiveness is clear. There are cops and reformers, including Seattle Police Lieutenant Adrian Diaz and Riall Johnson, campaign manager of the De-Escalate Washington initiative to reduce police use of deadly force. There are developers and housing activists, ranging from Vulcan to Solid Ground and others. There’s industry and environment.

And there’s business and labor — perfectly balanced with seven major union heads and seven representatives from the business community.

The team is also a checklist of Durkan's priorities. It is heavy with members of the non-profit and service sector who are doing much of the frontline work on homelessness: Bill Hallerman of Catholic Community Services of King County; Colleen Echohawk of the Chief Seattle Club; Lauren McGowan with the United Way’s Ending Homelessness & Poverty; Marty Hartman of Mary’s Place; and others.

There are legal advocates, like Kathleen Taylor of the ACLU and Lisa Daugaard of the Public Defender Association. There are immigrant-rights advocates, like Jorge L. Barón of Northwest Immigrant Rights Project and Juan Cotto, director of El Centro de la Raza. Also, Dr. Caleb Banta-Green, a University of Washington researcher and  a voice for tackling the opioid crisis.

None of the list’s members endorsed either Cary Moon or Nikkita Oliver, two of Durkan’s leading opponents for mayor. And with the exception of OneAmerica, none of the team's members came from organizations that have spoken in favor of the Seattle City Council's proposed head tax on business, which has quickly become a line-in-the-sand issue, in some ways defining political factions in non-partisan Seattle. Several, like Maud Daudon with the Seattle Chamber of Commerce, have spoken forcefully against the idea of taxing large businesses for every hour worked by an employee.

But while many of the team’s members were donors, endorsers or both of Durkan, it was not a prerequisite for membership. Daugaard did not endorse Durkan and, in the context of police reform, has had some high-profile disputes with Durkan.

Daugaard said on Monday that the team had not yet received its marching orders, but said, “I appreciate being asked and am glad to help and I appreciate the spirit of all hands on deck. If we can’t come together to make a lot of progress on public homelessness and criminal justice reforms quickly, it shouldn’t be for lack of trying.”

Until it’s more clear what goals are given to the team, it’s hard to say whether it is a symbolic statement of inclusiveness or a group of people that will carry over into the mayor’s office. Two transition members, Mike Fong and Shefali Ranganathan, will go on to be deputy mayors to Durkan.

Fong, a longtime city staffer who was chief of staff for Mayor Ed Murray, was serving as chief operating officer for County Executive Dow Constantine; Ranganathan is executive director of Transportation Choices, a statewide advocacy group where she has worked for a decade. From former-Mayor Ed Murray’ transition team in 2013, only Hyeok Kim and John Okamoto went on to work for Murray in some capacity beyond just the transition.

The team will meet three times in the coming weeks, twice this month and once in December, after Durkan has taken office.