Farewell Two Bells and your Tavern Burger. You'll be missed 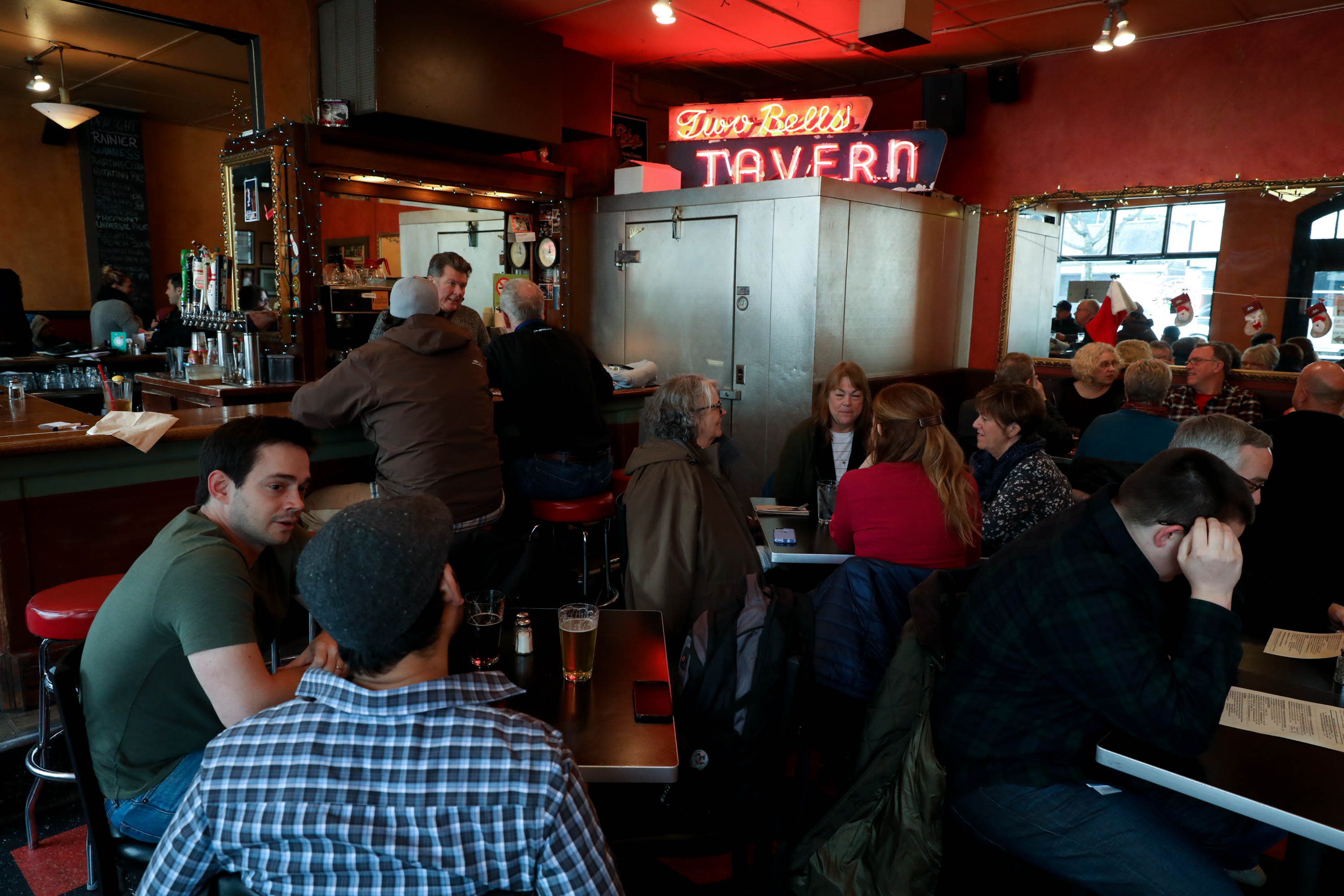 In one of the cruelest double-whammy disappearances in Seattle history, Belltown’s Two Bells will serve its last burger on a baguette on Dec. 31, swift on the heels of Pioneer Square’s Bakeman’s Restaurant shuttering shortly before Christmas. At 71, Two Bells' owner Jeff Lee, like 66-year-old Bakeman’s proprietor Jason Wang, is ready to retire.

Lee has entered into an agreement to sell Two Bells’ one-story building, which dates back to 1923, to Security Properties. Once the sale closes, the new owner is likely to develop a high-rise residential tower on three Fourth Avenue parcels currently occupied by Lee’s bar, an adjacent parking lot and a shelter for homeless families.

Unlike Bakeman’s, the Two Bells was terminally laid-back, a place for politicians, journalists, artists and outcasts to either fuel up or unwind. The bar had an anachronistic streak: Assuming its name in the early '40s, it didn’t serve hard liquor until after the turn of the 21st century, declined to offer French fries alongside its famous burgers and would only haul out its small, beat-up TV for special occasions like elections, Seahawks games and VHS movie nights. (The TV features a built-in VCR.)

“We’re interested in social intercourse, that’s why,” says Lee of his refusal to bow to the hi-def — or even DVD — era.

In Two Bells’ bathrooms, one could always count on graffiti that was a bit smarter than your standard bar scribblings. “Please hurry, Mr. Mueller” was one such message sketched in Sharpie above a urinal last week.

Two Bells’ most famous anecdote involves the time former House Speaker Dennis Hastert — since convicted of preying on teenage boys — walked in with his family.

“They were on their way to Alaska to talk to Sarah Palin about becoming McCain’s Veep,” recalls Lee, who purchased Two Bells in 1999. “It was Pride Day, which is the biggest day of the year for us. A bunch of leather boys in the bar were drunk. Hastert heard their drink orders, which were unprintable, and he was with his wife and granddaughter. They immediately got up and his granddaughter said, ‘We want to stay.’ But off they went.”

It’s reasonable to wonder why Lee didn’t sell to a buyer who pledged to continue operating the Two Bells as is. Turns out, that’s an option he explored.

“The building is 95 years old and is in fairly sad shape,” he explains. “Anybody who wanted to resurrect the Two Bells would have to invest a great deal of money to bring it up to speed. I’ve talked to restaurant people and the tenant improvements are just prohibitive."

It’s also reasonable to wonder whether some sort of landmark designation might spare the building the wrecking ball. Steve Hall, a member of Friends of Historic Belltown, notes that even if it was determined that the cultural heritage of the building was enough to earn it landmark designation — which is exactly what happened with Mama’s Mexican Kitchen down the street —an “economic exemption” might trump it, given that the owners are entitled to “realizing a reasonable return” on their investment.

Hall is careful to note that, compared to other developers, Securities Properties “has a strong history” of developing affordable housing, adding, “We have higher hopes for…an inclusive building that responds to the Belltown context.”

Meanwhile, on the longest night of the year (winter solstice), Dave Meinert — who purchased classic haunts like the 5 Point and Comet and left them as intact as current codes would allow —walks into Two Bells and orders a BLT and a dark beer. Lee comes over and introduces himself, and the two start discussing what will become of the Two Bells’ light fixtures and barstools, which Meinert is interested in purchasing as a sort of parts car for his empire of establishments.

“Anything in one-story buildings is threatened to be gone,” Meinert says. “Seattle’s got to figure out if it’s serious about preserving old places. We talk about it and we don’t do anything about it. I’m totally pro-development; I just think these places need to be saved. There’s a special thing about old businesses. You can’t replace them.”

“Sometimes we take certain types of low-key places — dive bars, record stores — for granted,” she says. “When things get displaced at a rapid pace, it can be disconcerting. We’ve gotten used to convenience and people are really busy. People stop going out to third places and I think that does something to our social connectedness. Not always doing the most convenient thing is what will preserve our collective sense of identity.”

Speaking from a girthy gut’s worth of experience, I could never easily get the smell of a Two Bells Tavern Burger off my beard. Only after two showers would the combination of beef, bacon, caramelized onions and Beaver Sweet Hot Mustard cut with mayonnaise finally set my facial follicles free.

It never really bothered me, though. The scent of the burger lingering beneath my nose for days was hardly a foul one. Now it’s an odor Seattleites will miss for the rest of their lives.