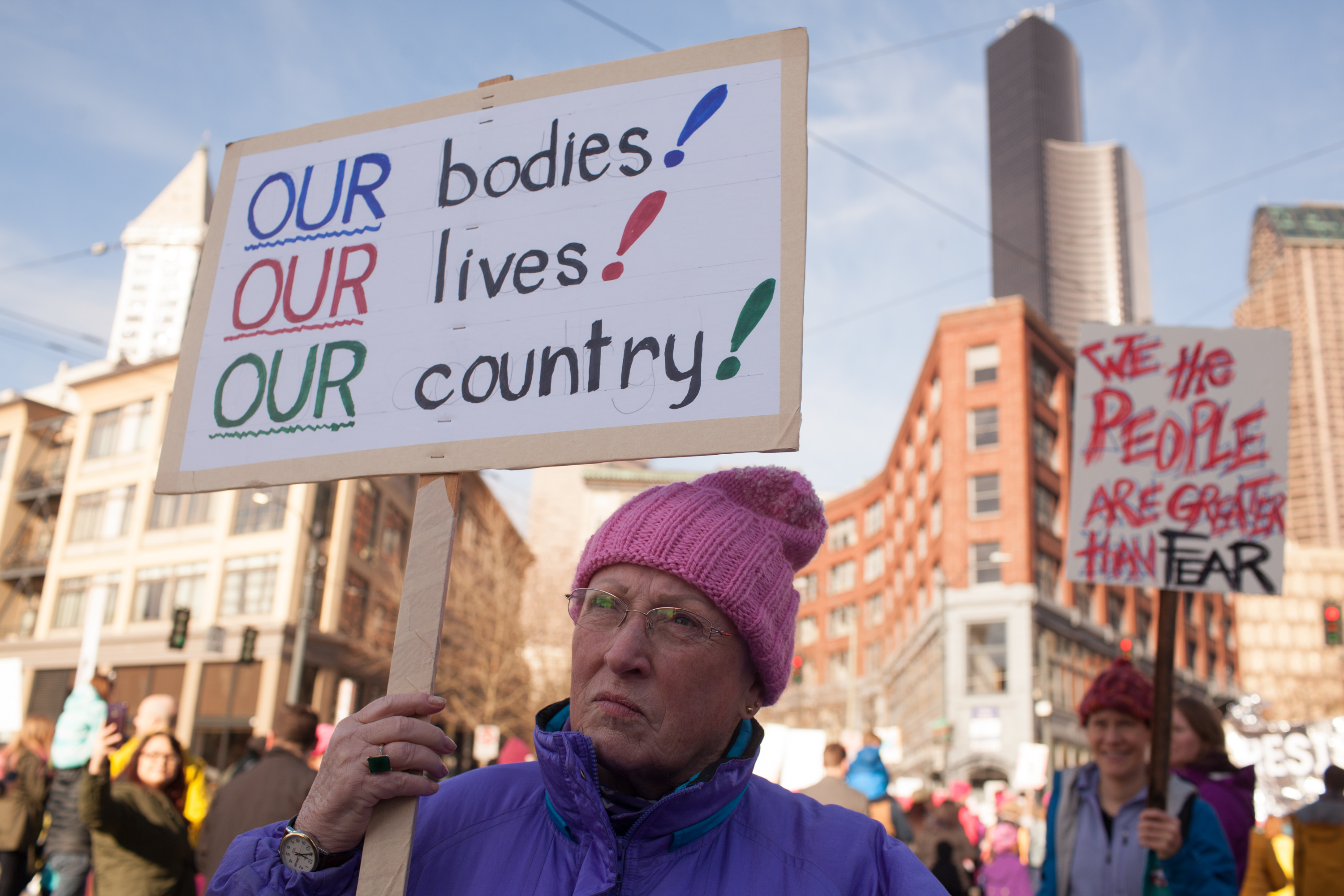 Barbara Pistoresi, 80, one of the tens of thousands of participants in the Womxn's March on Seattle in 2017.

Amid the firings, suspensions and disavowals of so many powerful men who have lately been accused of sexual harassment and assault, Dictionary.com announced that the 2017 word of the year is “complicit.”

Based on the news headlines, some might be tempted to think that “complicit” is a term best reserved for Harvey Weinstein’s “honeypots,” for the producer who wrote off Charlie Rose’s predatory behavior as “just Charlie being Charlie” or for the victims of sexual harassment who have waited decades to come forward. But the fact is, sexual assault and harassment are made possible by a culture that teaches us to disbelieve accusers, to look away, and to do nothing. In 2017, we are all complicit.

Yet 2018 offers us a chance to begin to dismantle this web of complicity. To do this, we must set aside both our voyeuristic satisfaction at seeing the next high-profile person destroyed because he couldn’t keep his robe tied shut and our self-serving assurances that we and our loved ones “would never do anything like that.” Instead, we must refuse to be complicit and must confront the everyday persistence of sexual violence.

To refuse to be complicit means to ask ourselves tough questions about what we are doing to support a culture of sexual violence. A loved one told me that, upon seeing so many stories from victims of sexual harassment and assault, he has asked himself, “Have I done or said things in my life, however inadvertently, that made my colleagues feel unwelcome or unsafe?” His question is a good one, but it must be accompanied by compassionate awareness and a commitment to change.

In a similar vein, a trusted colleague recently acknowledged his error in defending Bill Clinton as a target of conservative harassment, rather than what Clinton really was: a sexual predator who abused his power. I admitted to my colleague that I had made the same mistake, but I see things differently now. To reckon with our own complicity, we must recognize our mistakes and misjudgments, affirm that we can learn and grow, and do things differently.

Refusing complicity also means holding sexual predators accountable, and this is harder than it might seem. Whether we can admit it or not, the odds are good that all of us know, admire and love someone who has engaged in sexual harassment or assault. Refusing to be complicit means not making excuses for others or hiding behind our faith in their basic goodness. Good people commit sexual violence; in fact, they do it all the time.

In light of the prevalence of sexual harassment and assault, we will have to ask ourselves how — or whether — to make amends when people we love or admire are exposed as sexual predators. I’m not talking about the Donald Trumps or the Roy Moores of the world — the unrepentant ones who mock, threaten and harass their accusers and refuse to consider their own complicity. I’m talking about the ones who say they want to do better.

Sometimes our reflections will lead us to Savannah Guthrie’s heartbreak over allegations about her TV co-host, Matt Lauer. In others, they will lead us to Tig Notaro’s disavowal of her former colleague, Louis CK.  In every case, we have to be willing to take allegations — even against people we love and admire — seriously. We have to recognize how painful it is for victims to come forward and we must give them the benefit of the doubt. If we don’t, we risk being complicit.

There is no science to decide how to hold someone accountable, but there are questions we can ask to help us figure out what to do.

First, can we imagine the experiences of those have been abused? What would it feel like to be groped when you thought you were just taking a photo with a politician you admired? Or to go to a meeting to ask a senior colleague for career advice and have to fend off sexual advances instead? Or to be given a sex toy by a respected colleague? How demoralizing and frustrating and even heartbreaking is it to endure such treatment? And how terrifying is it to feel so alone, to worry that your life or aspirations or career are at risk, to fear that you are in danger?

Second, is the victimizer committed to righting past wrongs and changing the future? That means doing the hard work of reconciliation, not the easy work of issuing an apology. When Dustin Hoffman responded to John Oliver’s questions about the allegations against him, he said that it’s all harmless fun on the set when we do “the things that we do between takes.” But he was missing the point. “We” are the powerful people who “do things” to less powerful people. Surely, Hoffman can imagine that it would be difficult for a 17-year-old intern to stand up to an adult male — the star of the production and an Oscar-winning actor. His reaction reveals that he has no sense of imagination and no interest in reconciliation.

And when Garrison Keillor responded to allegations of sexual harassment, he didn’t ask himself why something that seemed innocuous to him was still so painful to the person whose feelings he purported to care about. Instead, he implied that her motives were insincere and turned himself into the victim. Whatever that is, it isn’t evidence that Keillor is sincerely committed to addressing his own complicity in the sexual violence in our culture.

Third, does the victimizer engage in predatory behavior while promising to defend and stand up for others? Charlie Rose said that he “prided [himself] on being an advocate for the careers of the women with whom [he has] worked” while he was exposing himself to them. Al Franken wanted to be a “champion for women” while he imposed himself on women’s bodies without permission. And Jeffrey Tambor wanted to foster complex conversations about gender while he harassed and assaulted two transgender women.

It’s impossible to believe that the Charlie Roses, the Al Frankens and the Jeffrey Tambors of the world don’t realize that their behavior is predatory. Their apologies will ring hollow until they give their accusers the benefit of the doubt and commit to changing the culture that has enabled them. Unless that happens, despite all their other good deeds, they will remain complicit. If we continue to support them, we do, too.

The year 2018 can be the year when we refuse to be complicit in the culture of sexual violence, but only if we are willing to ask hard questions, acknowledge past wrongs and commit to change. Because if all the #MeToo movement does is get a handful of sexual predators out of positions of power, it — and we — will not have done enough.