Seattle made the most of a difficult year 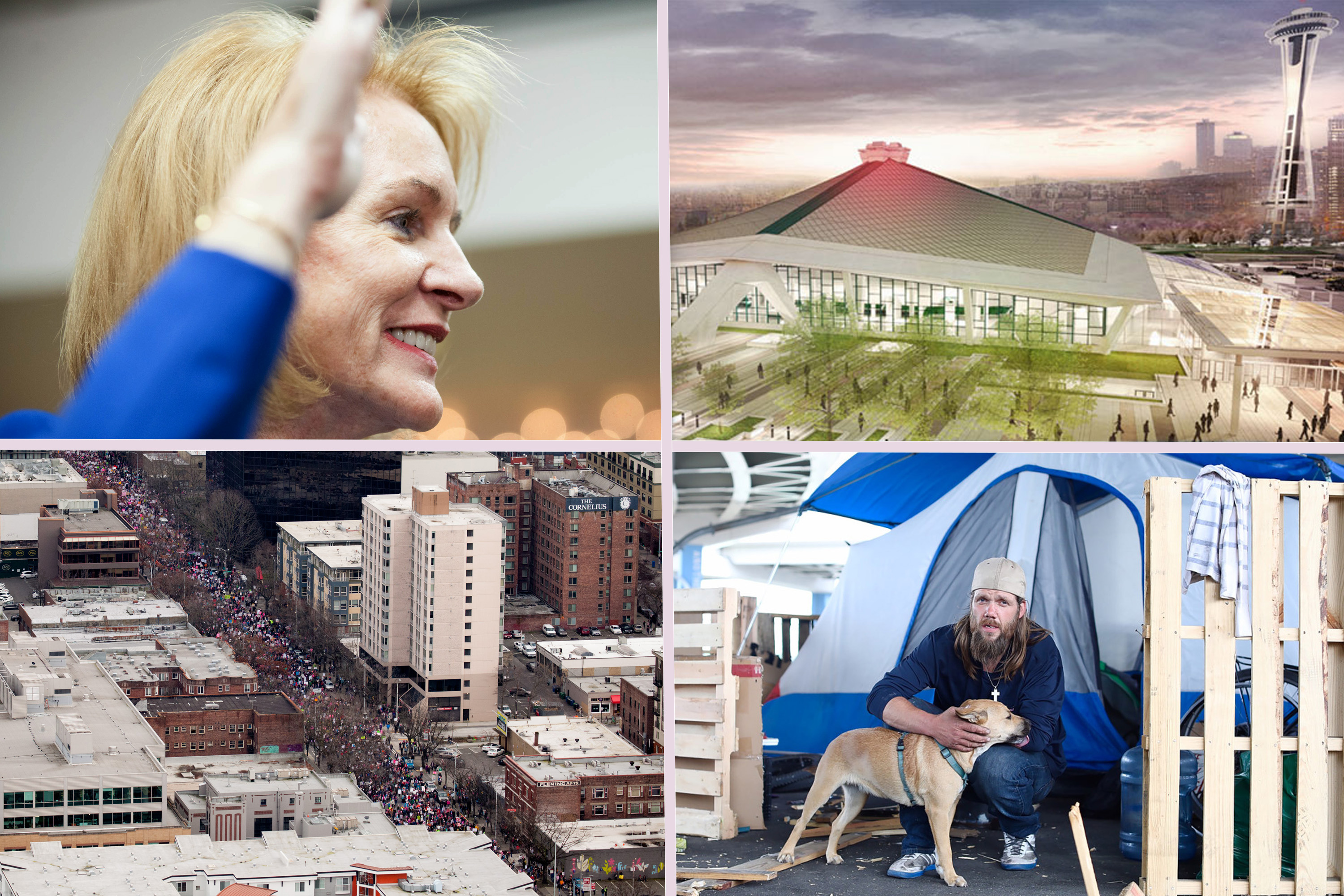 (Clockwise from top left): Mayor Jenny Durkan is sworn into office; A rendering of what a proposed redesign of KeyArena could like; "Country" a homeless man who has lived on the streets of Seattle; A view of the Women's March in Seattle.

I would say it was, but with positives, mostly born of adversity.

In January, we were still in shock. Donald Trump had won the White House and liberal Seattle’s blue bubble burst. His inauguration was a depressing spectacle that showcased a new administration rife with alt-right nationalists. From trade to protecting the environment to embracing immigration, Trump touted policies that are the antithesis of the Pacific Northwest’s foundations.

Out of these challenge, liberal Seattle also found its voice. Then-mayor Ed Murray declared the city a leader of the Resistance, and Governor Jay Inslee and Attorney General Bob Ferguson agreed, the latter taking the administration to court 18 times, most notably opposing Trump’s Muslim ban. The Washington Post declared Washington state “the epicenter of resistance to the Trump agenda.”

The Trump victory also mobilized women. In January, the Womxn’s March in Seattle attracted upwards of 120,000 participants — and some estimates put it at 175,000, which would make it the largest protest demonstration in the city’s history.

And women’s strength and outrage translated to the ballot box, which doesn’t always outbursts of activism. After nearly a century, a second woman was elected mayor. It became a foregone conclusion when, in the August mayoral primary, the top four finishers were women who covered the Seattle political spectrum from mainstream progressive to populist radical. By year’s end, 38 women had been elected mayors across Washington state.

On Nov. 28, Jenny Durkan was sworn in as the first female mayor to lead the city since the progressive Bertha Knight Landes in the 1920s. A thick glass ceiling was finally broken.

That mayoral race grew out of a terrible sequence of revelations: allegations against Ed Murray that he had sexually abused minors, including a family member. The accusations, first reported in the Seattle Times, stunned the city whose popular mayor was thought to be cruising to re-election. But the voices of the victims were credible, and the leader of the Resistance had to step down. In the following interregnum, two city councilmembers, Bruce Harrell and Tim Burgess, briefly served as mayors, making this the Year of Four Mayors.

No one missed Murray or his front-page troubles, but his fall undoubtedly boosted those women seeking to replace him. The revelations of sexual harassment, rape and abuse by major Hollywood and national political figures this year only served to underscore that perhaps the patriarchy’s time has passed and women should take charge.

It was the kind of year when whether it was okay or not to punch a Nazi became a common café conversation. One swastika-wearing man was punched in downtown Seattle and a video of the knockout went viral on social media as the city debated how to treat Nazis and how the media should report on them. An interview on KUOW of the knocked-out Nazi created a storm of criticism for giving the anonymous man a platform.

It seemed to be the year we began re-litigating American Nazism. Did World War II ever happen, or was our victory simply fake news? One positive of digging back into that era: the year — the 75th anniversary of the signing of Executive Order 9066 — saw moving local commemorations and exhibits of the incarceration of Japanese Americans recognizing the evil that took place on the WWII home front right here in Puget City.

Seattle humiliated itself on the national stage when it came to Amazon’s announcement that it was seeking a separate but equal new headquarters, HQ2, anywhere but here. Despite some warnings, over 200 cities in North America began falling all over themselves to entice the multi-billion-dollar retail giant to settle in their communities. They offered land, tax breaks, cash, and whole teams of public employees dedicated solely to Amazon’s needs. Not sure if anyone offered their first-borns, but it wouldn’t be surprising.

It’s not that Amazon needs any of it. The value of the company soared. In 2017, the company’s founder Jeff Bezos became the world’s richest man. By late November, he’d “made” an estimated $35.7 billion in 2017. His net worth is around $100 billion. Why a company like that needs any subsidy from ordinary taxpayers is only rationally explained as being in the “because we can” department.

Amazon’s wandering eyes caused some to advocate for apologizing to Amazon for any perceived slights an ungrateful Seattle might have inflicted. Said Heather Redman, chair of the Seattle Metropolitan Chamber of Commerce: “It’s never too late to say we’re sorry.”

This was against a backdrop of a homelessness “emergency” where Seattle is ground zero and the city struggles to raise the resources to meet the challenge, a challenge made worse by Amazon’s impact on raising rents, a trend pushing more people into a crisis over shelter. A proposed head-tax on large employers that might have addressed the problem failed to pass.

Still, Seattle is resiliently positive. It sees the Amazon glass as half-full — great jobs and an expanded, denser downtown footprint. Our fantasies about big projects are thriving. Money was voted this year to study whether a lid over I-5 through downtown was feasible. Such a lid would provide new space for development and public amenities and repair the trench that was dug in the 1960s. Neighborhoods could be reunited. Going one better, some greens are proposing that we tear up I-5 through the city altogether.  The freeway is facing enormous repair costs. Seattle has a history of fighting freeways, why not make downtown more carless? Bertha the borer is done but we’re not yet finished with the waterfront — or with widening and lidding the SR 520 corridor through Montlake or expanding the regional light-rail system — but it wouldn’t be Seattle without dreamers thinking of the next big things.

Another positive: major projects are lining up at the long-neglected Seattle Center. The city approved a largely privately funded $600 million makeover of KeyArena into a venue that could host both NBA basketball and NHL hockey teams. The Space Needle began a $100 million dollar remodel. And the city and Seattle School District have agreed to work together to revamp Memorial Stadium.

If we’re revitalizing the Center, that’s balanced by the bad news that one of the main buildings at the entrance to the Pike Place Market at 1st and Pike is slated to be torn down and replaced with a boutique high rise hotel. This intersection is the grand entrance to the market where all four corners have their history preserved in structures more than 100 years old. That this intersection is in play boggles the mind after everything that was done to preserve our great urban gem. Will it be fatal to the Market? No, but erosion of historic areas like the Market, Pioneer Square and the International District is ongoing and concerning.

Progressives did receive some good news. Thanks to Eastside voters, in 2018 Olympia will be, barely, in the hands of the Democrats after the successful election of Manka Dhingra to the state Senate. Polls suggest Democrats will have the wind at their backs in the lead up to next year’s elections, but then last year, the polls told us we were going to have a Democratic woman as president now.

Huge challenges lie ahead for the city: housing, homelessness, affordability, inequality and school quality. Urban and economic dynamics will continue to push out and price out many longtime residents and communities of color into the suburbs and gentrification will continue apace. It’s easy to say you want to build a city for everyone, as Jenny Durkan does, but our economy “prosperity” for the few is making that virtually impossible.

It’s been a year of enduring crises that are testing the resiliency of progressive agendas and ideas. The coming year offers hope for progress, but our patience, creativity, ideals and leaders will be tested. More resistance, hard work and, with luck, a few silver linings, lie ahead.