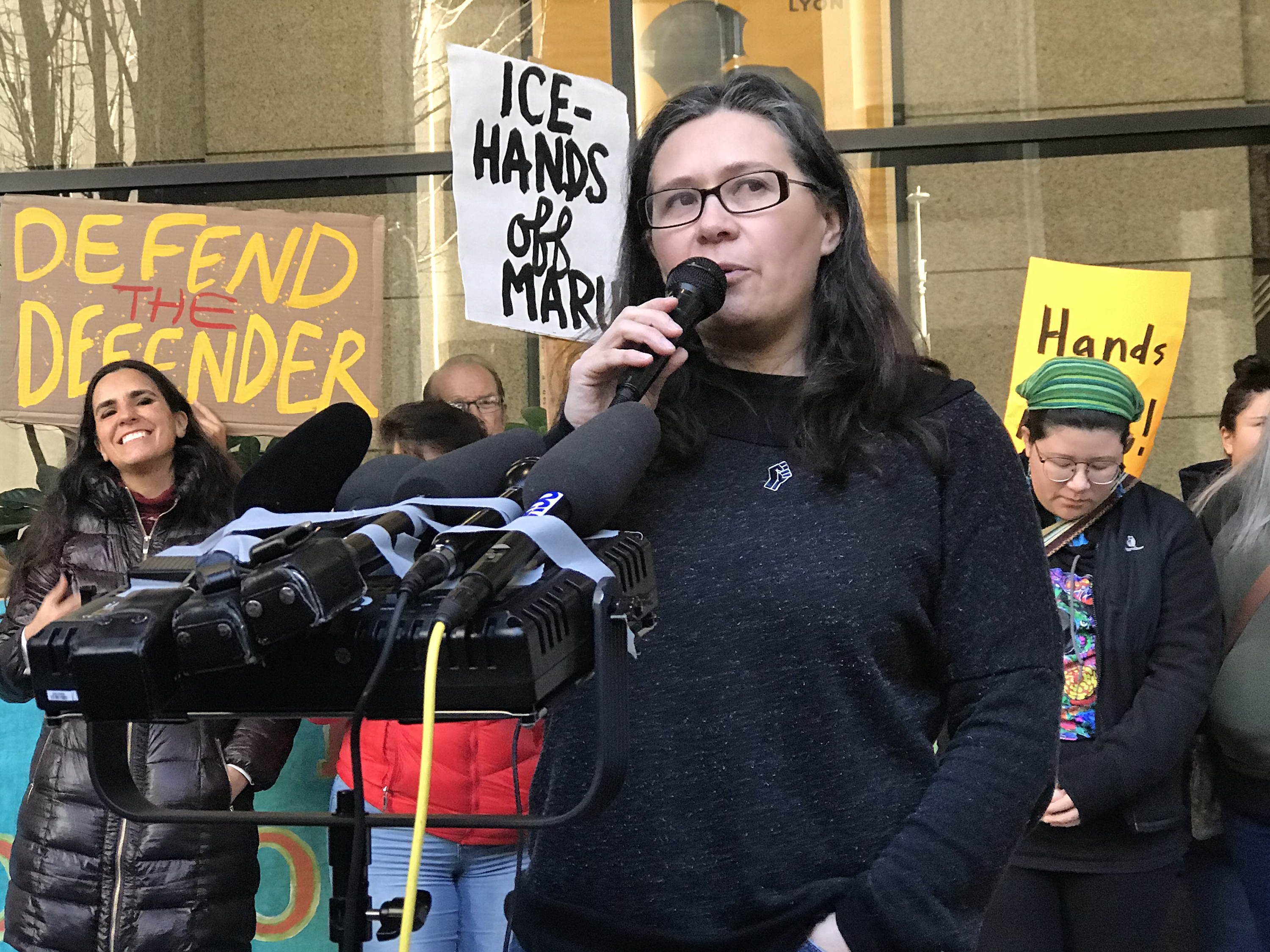 As U.S. Immigration and Customs Enforcement continues to crack down on undocumented immigrants around the country, the agency has sent a prominent immigrant-rights activist in Washington a notice that it is initiating deportation proceedings against her.

Maru Mora Villalpando, 47, known nationwide as an immigrant leader and a key organizer of protests at the Northwest Detention Center in Tacoma, received a notice to appear in immigration court, a first step toward deportation.

“I believe that ICE sent me this letter and started deportation proceedings against me because they are not so much against my immigration status, but against my political work,” Villalpando said in her first interview since receiving notice from ICE. “This is political oppression. That’s what they’re doing. ICE is finalizing the transition from law enforcement into a political-oppression apparatus.”

Villalpando is one of several well-known activists recently targeted by ICE. Last week, for example, ICE detained Ravi Ragbir, executive director of the New Sanctuary Coalition of New York City. His arrest sparked protests that led to the arrest of 18 people. That same day, ICE also picked up Eliseo Jurado, the husband of Ingrid Latorre, who is fighting deportation as she takes sanctuary in a Colorado church. Jean Montrevil, co-founder of the New Sanctuary Coalition, was also detained. Villalpando received her letter from ICE last month, just before the Christmas holiday.

“I don’t see my case as an isolated case. I see it as part of the movement,” Villalpando said. “We call it a war,” she continued. “Since this guy took office, this is a war against immigrants,” Villalpando said, referring to President Donald Trump.

In a statement, Yasmeen Pitts O'Keefe of U.S. Immigration and Customs Enforcement said Villalpando had "been charged by ICE with being unlawfully present in the United States, and her case is currently under legal review."

"All those in violation of the immigration laws may be subject to enforcement proceedings, up to and including removal from the United States,” O'Keefe said.

Villalpando, an outspoken and oft-quoted immigration activist who has appeared on news shows such as MSNBC and Democracy Now, has been an advocate in the region for approximately two decades. She has protested not only the current administration but former President Barack Obama’s deportation policies as well. "Obama took office and had the chance to change things for immigrants and he didn’t. He just created a bigger machine of detention and deportation and left the keys of that huge machine to a new regime," Villalpando said.

Earlier this year, she participated in a hunger strike at the Northwest Detention Center intended to call attention to the living conditions there. Those conditions, she and other activists said, included having people in detention work for as little as $1 a day. In September, Washington Attorney General Bob Ferguson sued the private prison company that runs the detention center, GEO Group, for violating Washington state’s minimum wage law.

Villalpando grew up in Mexico City, the youngest of nine children. Her grandfather was a socialist and a union leader who frequently participated in protests in the 1950s and 1960s. “He believed everything should be for the workers, so much that he didn’t have money for his own family,” Villalpando said. Liberation theology, a religious movement in Latin America that focused on aiding the poor, emboldened Villalpando.

In 1985, when Villalpando was a teenager, a deadly earthquake struck Mexico City. Villalpando witnessed people on the streets helping one another and was motivated to do the same. By the time she reached high school, Villalpando was eager to help the workers who were participating in a strike to shut down the school.

But Villalpando wasn’t the only family member who was politically active. Villalpando’s sister ran for local office and members of the ruling political party — Institutional Revolutionary Party, or PRI — broke into her home. Then in 1994, one of Mexico's presidential candidates was assassinated in Tijuana. Villalpando felt she had to escape the oppressive political atmosphere.

After arriving in the United States in the early 1990s, Villalpando settled in Ballard and worked odd jobs, starting with one that involved pasting labels on pasta jars. At the time, Villalpando was married and in 1997 she had her first and only child — Josefina. Before long, Villalpando was volunteering with Casa Latina, a Seattle-based Latino advocacy group. Eventually, she was hired as an ESL coordinator. Ultimately, however, Villalpando felt more radical advocacy was needed. That's when she launched Latino Advocacy, which helps different groups push for immigrant rights. When Western Washington University admitted her daughter, Josefina, the pair and Latino Advocacy moved to Bellingham.

Villalpando first revealed she was undocumented in 2014, creating her own headlines. “I was sick and tired of people thinking I was a U.S. citizen and treating me different. They would treat me as the advocate. And I was like, 'No, I’m not speaking on behalf of anybody. I’m speaking on my behalf. This is my life,' ” Villalpando said. "To me, it was important to say undocumented people need to speak for themselves.”

Now that she is under threat of deportation, Villalpando is employing her organization's own resistance training, which has been helping others who have previously been in the same situation. In a small, black filing box labeled "ARCHIVO" she has organized documents that prove who she is, as well as paperwork establishing her many years living in the United States. She's also built a rapid response team that is prepared to come to her aid if ICE knocks on the door. The idea is "to be mentally prepared to fight back,” Villalpando said. "The law is designed to keep us detained and deport us. We cannot rely on the law because the law is against us. We need to rely on the community. Make ICE’s job difficult.” Some immigration advocacy groups have filmed and observed detention attempts, to ensure that legal and constitutional rights are observed, and in some cases have formed human barriers around people whom ICE might be targeting.

Villalpando believes ICE might have obtained her home address through the Washington's Department of Licensing. The Seattle Times recently reported the agency regularly shares personal information with immigration officials. Villalpando said she has no plans to slow down. "To me, there's a rush right now. I am in a rush. I wanna make sure that whatever I can give to the movement, I give."